I’ve been writing about the airline industry for over 10 years now. I’ve flown well over 1,000,000 miles (most of it within the US), I’ve eaten more than my fair share of questionable airline food, and I think my lower back is permanently tweaked from spending so many hours in uncomfortable economy class seats.

I would like to think that I have earned the credentials necessary to put together a list of the best domestic airlines. The United States version at least.

So let’s do this! The following is my personal ranking of all the US airlines from the best to worst. Of course, this will be my opinion only, based on my own experiences. I mean, if Skytrax can make **** up, why can’t I?

And unlike Skytrax, I refuse to accept bribes which would skew the results of these rankings. Unless it’s a 6 figure bribe. Those are the kinds of bribes I like…

Anyway, here are what I consider to be the best airlines in the ranked US from the best to worst:

It’s really hard to say anything bad about Delta. I like them the most because they have a massive fleet of aircraft covering nearly every corner of the United States. They serve every city on their route map multiple times daily, and they can usually get you to your destination quickly even when things go wrong (cancellations, delays, bad weather, etc.).

They serve really good food in first class, their international business class product is excellent, and it’s the airline I can depend on the most.

I fully admit that Southwest Airlines isn’t for me. However, since they are so good at what they do, they are fully deserving of being placed in the number 2 spot on this list.

They have an impressive route network, decent fares, and dead nuts reliable service. The planes are clean, the crews are happy, and it’s generally a really good experience. And just like how it is with Delta, this is an airline you can depend on to get you where you need to go.

The only reason why I don’t fly with them very often is because of the non-assigned seating. The lack of a first class product is a turn-off as well.

United Airlines is very similar to Delta, but slightly more s****y.  They have the same impressive route network, clean planes, and good onboard service in all classes (their Polaris business class product is outstanding btw). I also think that they have some of the best hubs in the network.

My problem with United is how “stale” they feel. Their cabin crews always seem tired and burnt out, the food in first class isn’t quite as good as what Delta is serving, and they have been really dragging their feet upgrading the interiors of older airplanes.

In my opinion, Alaska Airlines is so close to being the best airline in the US. Their onboard service (especially in first class) is excellent. Alaska Airlines employees tend to be happy, and you can tell that they really enjoy their jobs. Their airplanes are clean, and overall, they run a very reliable operation.

My biggest beef with Alaska Airlines is their limited route network. This is a very western-specific airline, and they don’t have very good coverage of the eastern half of the country (yet).

If Hawaiian Airlines had a more extensive route network, they would be placed much higher in this list. Long time readers of SANspotter.com already know how much I love this airline.

The onboard service is excellent, and I really appreciate how much effort they put into making everything (food, ambience, uniforms, etc) feel Hawaiian. There’s genuine Hawaiian hospitality in every facet of the services they offer, and it’s hard not to like. A lot.

What I don’t like about Hawaiian is their minimal coverage of the mainland US. The only time you can fly with them is if you’re flying to (or within Hawaii), and that’s a shame. I really think they could put a lot of pressure on other US airlines if there was more route overlap.

I know. American Airlines is just as large as Delta and United. They have the same excellent coverage of the United States, and for the most part, their onboard service is just as good. Why are they so far down on this list? Well, it’s because I haven’t been able to depend on them at all for the past year or so, and it’s starting to tick me off.

American Airlines has been notorious for canceling and delaying flights en masse over the past 12 months or so, and I can tell you from personal experience that it’s no fun to get caught up in that mess. I’m at the point now where I only fly American Airlines as a last resort. Until they can get their staffing and scheduling issues sorted out, they will remain in the lower section of this list.

I’m not afraid to admit that I actually like Spirit Airlines. If you’re not checking any bags, and if you can resist purchasing any extras such as snacks or a carry-on bag allowance, it’s actually a really cheap way to fly.

Their planes are clean, flights are generally on time, and I’ve never had a horrible experience flying with them. The reason why I placed them in the lower half of this list is because of their limited route network. They never seem to fly the places I need to go (which is usually hub airports in major cities).

Even though JetBlue has what I consider to be the best domestic first class seat, I placed them lower in this list for the same reason I shoved Spirit Airlines way down here as well: a limited route network.

The JetBlue route network is far too limited to be considered useful IMHO, and it’s usually really hard for me to fit them into my itineraries. And that’s a shame, because I really like flying with JetBlue. I would totally fly them more often if they made it easier.

I’m not as surprised as you are that Frontier Airlines isn’t sitting at the very bottom of this list. Many consider them to be the worst domestic airline, but personally, I’ve never had an issue with them other than slightly inconvenient delays.

Those delays are worth noting though, and that is why I’ve ranked them so low. If they can get their reliability issues sorted out, I would have no problem moving them up in this list in the next update. Frontier Airlines is good IMHO. They offer cheap fares, new airplanes, and a fairly decent route network. They have potential.

Breeze Airways is another airline that I feel has the potential of being one of the best airlines in the US. They offer really great fares to secondary cities, very clean airplanes, friendly cabin crews, and even a fairly decent (and somewhat competitive) business class product. Seriously – the “Nicest” seats on the Breeze Airways A220-300 are some of the best in the US.

That said, their route network is extremely limited, Not only that, they’ve been horrendously unreliable over the past year, almost to the point that booking a flight with them is taking a huge risk.

They’ve been canceling flights left and right, leaving many passengers stranded without any options. I sincerely hope they get things figured out, because they have the potential is being a really great airline.

What can I say about Avelo that I haven’t already? It’s an interesting little airline serving mostly secondary cities on both the western and eastern portions of United States. I quite enjoyed my Avelo airlines experience from Las Vegas to Santa Rosa, and I look forward to flying with them again sometime in the future.

The problem is that they are such a niche carrier that I have no idea when I’ll ever get to fly with them again. If you live in one of the smaller cities that they serve, I can’t recommend them highly enough. However, for the rest of us, their limited route network is almost useless.

In my opinion, Sun Country Airlines has two things going against them. First, they are an ultra low-cost carrier now, meaning that there’s hardly any onboard service to speak of (you have to pay extra for everything).

Second, they have an extremely limited route network. Sun Country is only going to work for you if you live near an airport that they fly to. Otherwise, they are essentially nonexistent (and irrelevant).

Was it any surprise that Allegiant Air was going to end up at the bottom of my list of the best domestic airlines? Although I can praise them for offering extremely low fares, they have the same annoying problems that Sun Country Airlines has (but worse).

Not only are they obscure and irrelevant to most of the population in the United States, there’s absolutely no onboard service to speak of (if you’re not willing to pay extra for it). Their on-time performance hasn’t been all that great either.

However, at least they’re not cutting corners on aircraft maintenance anymore (it used to be really bad). That tells me that they’re at least trying, and who knows? Maybe they’ll be positioned a little higher up in the next version of the annual SANspotter best domestic airlines list. A 6-figure bribe would certainly get them there… 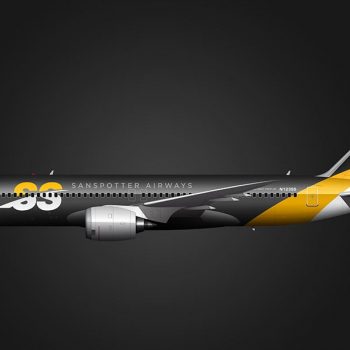