As usual, I’m a little late to the party. This American Airlines 777-200 business class review is something that I was planning on doing years ago, but instead, I preferred to focus my attention on what I thought we’re better (more exotic) airlines.

Of course, the pandemic changed all that. Long-haul international travel for US citizens like me has been difficult, and my wings have been clipped ever so slightly. I’ve been forced to focus my attention to what’s available here in the US for the time being.

You’ve already read my Allegiant Air review. I’m sorry about putting you through that kind of torture. But now it’s time to wash yourself off, raise a pinky or two, and drool with me over American Airlines business class. Proper business class, complete with lie-flat seats and trippy mood lighting.

Business class review videos are hard to make. All I ever end up feel like doing is sitting back and enjoying the flight, but…I can’t because I’ve got to stay busy getting all the footage that I need to make a video about it.

In order to keep things as interesting as possible, I chose to take a slightly different approach to the video about this particular flight. Instead of a typical run-of-the-mill review, I thought it would be fun to point out all the little things that American Airlines doesn’t tell you about the 777-200 business class seat. There are definitely a few things you need to know.

As usual, the soundtrack for this video came from my pals over at Epidemic Sound. The song in the first half the video is “Unapologetic” by Timothy Infinite. The song in the second half is “This Way” by Snake City.

While admittedly not exactly the route I’d prefer to be reviewing a product like this, I took what I could get. Boeing 777s between Dallas and Miami are rare in normal times, so I jumped all over this the moment I decided to do a trip to visit my family in Florida.

Due to the pandemic and all the lockdowns, it was going to be the first time that I had seen them in a year and a half. What better way to kick off a long-overdue family reunion than to arrive in style on a swanky 777-200?

Terminal D at the DFW Airport is amazing

My arriving flight from San Diego docked in terminal A, so I had to hop on the inter-terminal train and scoot on down to terminal D to catch this flight to Miami.

American Airlines had been changing schedules like crazy in the weeks leading up to this flight. They left me with a 1 hour layover, which as scary as it may sound, didn’t phase me at all. 60 minutes is more than enough time for a connection at DFW, and I actually had plenty of time to relax and get something to eat.

The boarding process for flight 2239 to Miami

By far the biggest drawback to flying on a widebody aircraft on a domestic route is the time that it takes to board. It was complete chaos at gate 33, and I’m surprised they got everyone on board without any fist fights breaking out.

Spoiler alert: it was completely different than the 777-300/ER and nearly identical to the 787-9. I really wish airlines would make more of an effort to create a consistent product across all of their different aircraft types.

What are the best business class seats on the American Airlines 777-200?

Once I had a pretty good look around at all the different seat types, it was pretty obvious which businesses class seats are best on the American Airlines 777-200.

I highly recommend a window seat in the middle of the cabin (even if you’re traveling with somebody). These seats are extremely private, and during the times during the flight or you might want to talk with your traveling partner, it’s easy to pop your head up and have a quick conversation.

Personally, I would avoid any seat in the first or last rows. There is a galley located at both ends of the cabin, and it can get quite noisy at times. Not only during meal time – those galleys are a common place for other passengers to stand up and stretch their legs (and talk loudly).

The departure out of DFW

Even though I like the Dallas Fort Worth International Airport quite a bit, I’ll be the first to admit that it’s not a visually exciting place. The terminals aren’t very stylish (except for terminal D of course), and on the outside, there is concrete in every direction for miles. Was that a great way to talk up this departure sequence, or what?

Not surprisingly, the video entertainment on the American Airlines 777-200 is exactly what you would get on any other American Airlines aircraft with video screens. The screens are large, very responsive, and stuffed full of TV shows and movies that most of us never have time to watch at home.

I will say this: the video screens reflect light off the windows like crazy – even though they’re covered with a matte-textured finish. The only way to eliminate the reflections was to lower every window shade in the cabin until it was pitch black.

Because of the fact that this was a short domestic flight, the only food we were served was of the “snack” variety. It wasn’t a full meal service by any means, but they gave us a choice: a fruit and cheese platter, or a chicken sandwich of some kind. My recommendation: always go for the cheese platter.

I didn’t have a lot of time after the meal service to stretch out and relax, but gosh darn it, I tried my best.

While not quite as comfortable as the seats on their 787 aircraft, these 777-200 seats are more than adequate. Yes, they lie fully flat, and I know for a fact that I’d be able to sleep like a baby all the way to Hong Kong one of these bad boys.

The arrival into Miami

Just as I was starting to get comfortable, they turned on the cabin lights and informed us that we’d be dodging thunderstorms all the way into Miami. I opened my window shade, clenched my butt cheeks, and got ready for the show.

If you read my full review of American Airlines 777-300/ER business class, you’ll know that I am a pretty big fan of the premium service on this airline. No, it’s nowhere near the levels of quality and service that you get in Qatar Airways business class, but they try their best. And it’s not half bad. 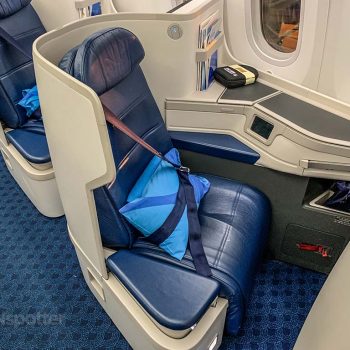 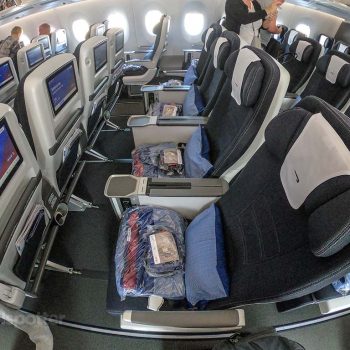