So, you’re at the airport and you’re handing over your credit card to pay an outrageous price for the measly amount of food you have in your hand. You’re probably muttering expletives to yourself. You may even be vowing never to do this ever again. Why is airport food so expensive?

Airport food is so expensive because of high rent, commission, and extra delivery fees. They aren’t charging so much money because they know they can get away with it. They do it because they have no choice.

As a matter of fact, you may end up having a little sympathy for airport restaurant owners after taking a moment to appreciate the high costs of service involved (which I’ll describe in great detail below).

But I’ll cut to the chase – since being able to score discounted airport food is rare, your best bet is to bring food with you if you want to keep your expenses down. That’s the only way to get a good deal on food at the airport.

Six reasons why airport food is so expensive

Running a restaurant or food stand at an airport comes with exorbitantly high costs and hurdles that non-airport business owners don’t have to deal with. Below are some of the most significant factors that impact food prices at airports.

As you can probably imagine, food businesses pay a hefty fee to rent space at an airport. However, once they rent the area, they’re not allowed free reign to manage their business as they please. Instead, airports require their vendors to stay within a certain percentage of the cost for the same items outside the airport.

While, in theory, this works in favor of consumers, the reality is that because of the high rent, commissions, and other fees these food companies have to pay, they need to keep their pricing higher to make a profit.

Furthermore, if one restaurant or food stand lowers its pricing, travelers will catch on and flock to that place until the others inevitably follow suit. So, instead of creating the flock effect, you’ll find that prices remain high, and there’s little price fluctuation in any given food product throughout the same airport.

Nevertheless, the so-called “street pricing” that airports implement has its place in preventing airport restaurants from labeling items with even more outrageous prices than they already are.

When it comes to airports, paying a high rate to rent a space isn’t the only fee that a business owner is responsible for. Instead, in many cases, restaurants and food stands must pay rent and commission on what they sell. The exact amount of commission will depend on a vendor’s lease agreement with the airport. However, it isn’t uncommon to see commissions of over 10%. Are you starting to feel any sympathy yet?

Getting the lease is another hurdle in and of itself – airports go through a rigorous vetting process that involves reading over the vendor’s Request for Proposal (RFP). Such competition is yet another factor that drives up airport food prices.

If someone owns a café outside of an airport, their coffee vendor might stop by every few weeks to give them a new batch of coffee beans. The ease at which this happens isn’t the same at an airport.

Instead, people who supply airport companies with goods must manage the hassle of airport parking (and the fees associated with that), passing through security, and delivering the items to the restaurant or store.

As a result, suppliers tack a premium price onto airport delivery services, thus forcing businesses to keep a higher price tag on their food.

Storage space at an airport is hard to come by. For this reason, some airport restaurants and food stands have the added expense of paying for rent and storage to handle their extra supplies.

Then, of course, there’s the added time and financial commitment to have employees transfer goods from storage through security and into the restaurant regularly.

Have you ever noticed that the price of airport food outside of security tends to be slightly cheaper than inside the secure area? Not only do restaurant owners know you don’t have many options at that point, but it also has to do with the fact that their employees need to pass extra background checks.

And where there are background checks, there’s more money that restaurant owners need to spend, thus upping the cost of your food.

Let’s face it – working at an airport opens the opportunity for shifts covering any 24-hour period, depending on the airport. However, even the most enthusiastic new hires at a restaurant may soon grow tired of late night or early morning shifts.

Nevertheless, it’s not only work schedules that deter employees. According to Restaurant Business, airport business owners have trouble retaining employees because it’s often challenging to arrive at an airport via public transportation. And, although employees receive discounted airport parking, they still have to shell out parking money each month. Furthermore, employees must allow extra time to pass through security.

High turnover rates are detrimental to profit margins at airport restaurants. In fact, Employee Benefits News claims that turnover can cost business owners as much as 33% of an employee’s salary. For this reason, food businesses at airports need to keep their products priced higher.

Top food items at airports (which are often the most expensive)

When it comes to the food industry, it is beverages, not meals, that travelers flock to. Hudson Group reported that of the top ten items they sell at their airport facilities, eight out of ten are beverages. In fact, it goes beyond this – five out of ten of those beverages are water brands.

The only food item on the list was M&M king-size peanuts, with The Wall Street Journal being the sole non-food item.

Long story short? People get thirsty when traveling. So, do your best to load up on water before you enter the airport and use water fountains instead of pricey airport drinks.

If you’re going to pay a premium price for your airport food, it might as well be delicious. Airports recognize today’s “foodie” culture just as much as they acknowledge that many travelers are willing to shell out a few extra dollars for a gourmet meal over a boxed one.

For this reason, many airports now favor choosing restaurants and food stands that offer high-end food options. Often, such restaurants offer healthy or unique ingredients. In fact, you may even stumble across airport restaurants owned by Michelin-starred chefs such as Wolfgang Puck.

How to save money on food at airports

Discounted food is next to none at airports, so the best way to save money is by purchasing food before arriving at an airport and carrying it in with you. If you’re traveling abroad, you can’t enter another country with the following items:

However, you’ll be able to take just about any other food product with you to an airport or onto a plane. Yes, you can even take food through the security checkpoint, as long as it doesn’t violate maximum liquid requirements.

When it comes to liquid ps, you can take up to 3.4 ounces of liquids with you past airport security. Therefore, I recommend bringing an empty reusable water bottle with you so that you can fill it up at a water fountain once you pass through security.

Similarly, it may behoove you to focus on one airline program. By doing so (and earning enough status), you’ll eventually get to the point where you’ll have complimentary access to airport lounges whenever you fly. And you’ll never have to pay $20 for a hot dog ever again (well, at least until the next time you go to a baseball game). 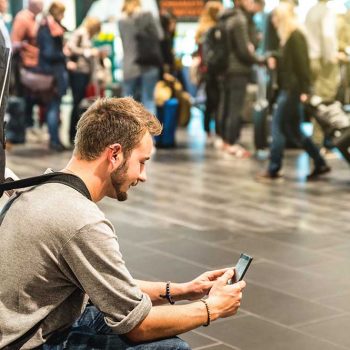 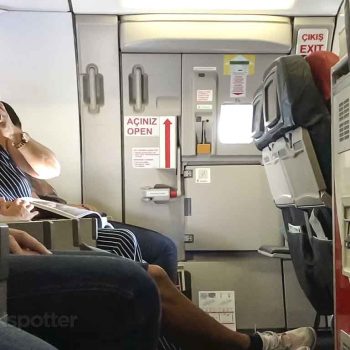