Before going into this AirAsia X review, I honestly had no idea what the difference was between AirAsia and AirAsia X. I mean, it’s essentially the same airline, with the same livery, owned by the same parent company. I didn’t get it.

You see, here in the US, applying an “x” to something implies that it’s “extreme” and / or super rad. It wasn’t my fault that I couldn’t help to think that I was about to fly on the raddest flight of my life in the moments leading up to it. Exciting stuff!

A rad flight calls for an equally rad video, so tensions were high as I was getting footage for this AirAsia X review. However, there were no fireballs or explosions involved, and I didn’t even have to say the word “bro” once.

Looking back on it, I think I missed a golden opportunity to tell you how sick this flight experience was. Of course I mean the good kind of sick. The kind of sick that you would hear someone say just after they ripped off an inverted 760 on the half pipe.

As always, the music from this video came from my pals over at Epidemic Sound. Their collection of YouTube-friendly royalty-free music is growing every week, and it behooves you to check it out if you’re making really sick videos of your own.

If you’re not already a subscriber to my YouTube channel, I’d recommend heading over there and checking out my content. What you are about to see is a written version of the full AirAsia X Premium Flatbed review video that I put together for this flight. Plus a some extra bonus content, as always.

My arriving flight from Penang was approximately 15 minutes early, which was nice since I didn’t have a lot of time to waste before this flight up to Taipei. At least that’s what I thought. I actually arrived so early that this flight wasn’t even listed on the departures board yet.

Unfortunately, there’s not much of an “experience” to tell you about. AirAsia X does not have lounges for premium passengers, so there really wasn’t much to do other than just meandering around the terminal as I would be for an economy class flight.

My first impressions of the AirAsia X Premium Flatbed

For the record, I’m probably going to get a lot of slack for referring to the Premium Flatbed seats as “business class”. But, let’s face it – this is a fully lie flat business class seat, similar to the ones you’d have to pay thousands of dollars for on other airlines. Even though air AsiaX doesn’t explicitly label it as “business class”, I do. So there.

In the air and getting settled in

The fact that I was one of only three passengers up in the forward cabin this morning made it all the more comfortable. I had plenty of room to spread out and do whatever I wanted in order to get the content I needed for the video and this blog post.

You know, things like getting up and placing my GoPro camera in different parts of the cabin in order to get footage of me eating. Weird stuff like that only airline reviewers such as myself thinks is perfectly normal.

Having just experienced the best airline meal of my life on an air Asia flight just several hours prior, my expectations were extremely high going into this hop up to Taipei.

For the record, I had the exact same choices for a meal that I had on the previous flight. My selection was made on the AirAsia website when I booked the ticket, so I didn’t even have to do anything once on board. The food just came to me without even asking for it.

A detailed trip to the lavatory (and other useless AvGeek nonsense)

Just how comfortable are the AirAsia X Premium Flatbed seats?

Extremely comfortable! The fact that I had the entire forward cabin nearly all to myself probably helped a lot. But the seat itself was still pretty darn comfortable.

Final thoughts: is it worth paying a little extra for an AirAsia X premium seat?

At the time of this writing (October 2020) AirAsia X is out of money and has announced plans to significantly downsize as a result of decreased demand from the COVID-19 pandemic. That’s extremely unfortunate considering how good of an airline this is, and I wish them nothing but the best on their eventual road to recovery.

That being said, I had nothing but really good feelings as I was sitting there in seat 2K for the remainder of this flight. I already knew that I’d be flying AirAsia and AirAsia X on future trips to Asia – although I wasn’t aware at just how bad the pandemic would be hurting them over the coming months. Anyway, here’s the descent and arrival into Taipei:

How much did I pay for this AirAsia X flight from Kuala Lumpur to Taipei?

This was a fantastic deal in my opinion. Not only did it include a premium seat with extra leg room from Penang to Kuala Lumpur, it also got me into a lie flat business class seat for this segment up to Taipei. It was a pretty sweet deal if you ask me.

This entire AirAsia / AirAsia X experience was purchased with my American Express Platinum Card, which always earns me 5X points on all airfare. 2485 Membership Rewards points were mine for the purchase of this flight.

Pros and cons of the AirAsia X Premium Flatbed experience

Normally I have to dig pretty deep to come up with a list of cons about a flight experience involving a fully lie flat seat. However, it’s going to be especially easy in this particular AirAsia X review.

No, this wasn’t a bad experience. At all. The issue is that AirAsia X is a discount airline that (by design), cuts costs wherever possible. That means that their Premium Flatbed product is a little different than what you would expect on a mainline carrier. Let me explain… 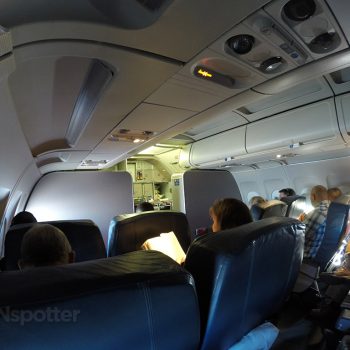