I recently had a chance to try Air Canada 737 MAX 8 economy from San Diego to Toronto. It was a satisfying experience that surpassed my admittedly low expectations.

Air Canada’s newest domestic economy product (as I experienced on the MAX 8) is really good. Seat pitch is a little tight, but the onboard service and in-flight entertainment was fantastic.

Yeah, it was far from being the most luxurious airline experience of my life. It was still fun though, and you wouldn’t even have to put a gun to my head for me to do it again.

Economy class videos on mainstream airlines such as Air Canada tend not to do very well on YouTube. I decided to go for it anyway, since the MAX 8 features their best economy class product at the moment.

The 4 1/2 hour flight from San Diego to Toronto provided me with loads of footage opportunities, and it ended up being a fun video to put together. Hope you enjoy it. If you didn’t, you’re probably not going to like the written review below…

Remember the last time that I flu between Toronto and San Diego? That was in Air Canada Rouge A321 economy, and I’m still scarred from that experience. Thankfully, as you’re about to read, Air Canada has redeemed themselves by putting their primary brand back on this popular route. Thank God.

Arrival at the San Diego Airport

Air Canada operates out of Terminal 2 West at the San Diego International Airport (SAN). Their ticketing counter is currently located all the far end of of the terminal however, so RIP to anyone with a lot of luggage to check. It’s a bit of a haul.

Waiting (patiently) for the flight

Once through the security checkpoint, you’ll have full access to the entirety of Terminal 2. Air Canada economy class passengers don’t get lounge access of course, but there are plenty of restaurants and shops to get what you need before your flight. San Diego Airport food is pretty good actually.

If you’re simply feeling lazy and unwilling to move, it’s not all that hard to find an empty gate to veg out at until the boarding process starts.

The boarding process for flight number 1092 to Toronto

The boarding process started about 40 minutes late. The most satisfying part of the experience was that (unlike how US airlines do it), they used zone numbers that actually meant something.

There was none of that “Premium Elite Diamond-Crusted Unicorn Medallion” BS to sit through before they started with the zone numbers. With my zone 3 boarding pass, I was solidly in the middle of the pack. What a concept!

Air Canada A330-300 economy class from Montreal to Vancouver was the last time I experienced the lowest level seats on this airline. That was pretty good, primarily because it was an internationally configured aircraft.

This 737 MAX 8 was the first time I ever got to experience a domestically configured Air Canada economy class seat. And you know what? First impressions were good.

The fact that there was a problem with the aircraft (one that prevented us from pushing off the gate on time) didn’t surprise me at all. It worried the hell out of me, of course, because this was a 737 MAX after all, and I couldn’t help but to think back on how many problems this aircraft had at the beginning of its life.

We ended up pushing off the gate about an hour and 20 minutes late. It wasn’t a big deal since I didn’t have a connection to make in Toronto, but it was certainly frustrating.

If you read my Air Canada Jazz CRJ-900 business class review, you’ll know that I had mixed thoughts about the video entertainment on this airline. The selection of movies and TV shows and music seemed to be good, but the hardware was severely lacking.

I’m happy to report that this economy class experience completely changed my mind. Air Canada in-flight entertainment (in all classes of service) is astonishingly good.

Wi-Fi is available at an extra cost for anyone needing Internet access. I didn’t get a chance to try it out, but I didn’t see anyone around me throwing their laptops to the floor in frustration due to slow connections.

Non-alcoholic drinks and a light snack are completely free in Air Canada economy class. If you want something more substantial, you’re going to have to pay for it. Thankfully the in-flight menu is pretty good, and from what I can tell, they had nearly everything listed in stock.

A few words about seat comfort

The total flying time from San Diego to Toronto today was just about 4 hours and 21 minutes. The economy seats on the MAX 8 felt decently comfortable up until about the 3 hour mark in my opinion. After that, the firmness was starting to get a little irritating. Nope, there’s not a lot of padding in these seats.

The last hour of the flight (and the arrival into YYZ)

Despite my bony butt giving me signals that it wasn’t happy about the lack of seat padding, I was still generally satisfied with the experience. In-flight entertainment was awesome, the food was pretty good, and the flight attendants were very friendly. Can you really ask for anything more in a transcontinental economy class experience?

The sun had completely set by the time we started making the approach into YYZ, so it was a dark and gloomy ride all the way in. Nevertheless, it was nice to be in Toronto again. It had been a minute since my last visit. 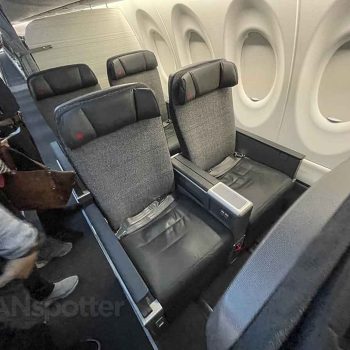