Home
Comparisons
A350 vs 787: which is better from a passenger’s perspective?

I’m feeling a little bored today, so what do you say that I invoke a massive Boeing vs Airbus war? Well, causing a ruckus isn’t my intention but we all know how this kind of stuff usually goes. Anyway, I figured it was time that I tackled one of the most requested comparisons I get from my readers: The A350 vs 787. The purpose of this comparison is to let you know my opinion about which is the better aircraft from a passengers perspective.

Considering that I never made it last high school algebra, I’m the last guy on earth to be telling technical stuff such as: which of these two aircraft has the better dispatch reliability. It’s the 787, by the way, coming in at 99.3% vs 99.1% for Airbus. But that’s not the point of this article.

Instead, given the fact that I’ve been on 6 A350s and 14 787s so far, I feel as if I’m extremely qualified to tell you which one is less likely to have you feeling like death after a long 14 hour flight.

Which aircraft is less likely dry out your sinuses on long flights? Which one offers a better toilet experience? The answer to those questions (and more) is coming up.

There seems to be two different types of people in this world: those who like to read, and those who binge on YouTube. In an attempt to try and please everyone, I present to you the video version of this article:

Even after watching the video, it’s still worth reading the rest of this article. Not because I’d be sad if I wasted all my time writing it out, but also because there are some additional nuggets of info that weren’t included in what I uploaded to YouTube.

A comparison of the boarding process (and overhead bins)

If you’ve reached this point in the article and you haven’t yet been filled with enough rage to engage in a Boeing vs Airbus argument with a complete stranger from the other side of the planet down in the comment section below, congratulations. It takes real strength to resist an urge like that. However there’s still plenty of time to get triggered so hang in there.

Anyway, there really isn’t all that much of a difference between the A350 and the 787 when it comes to boarding process. Airliners are airliners, and it’s pretty much the same experience no matter what type of aircraft it is. Unless, of course, it’s a United CRJ-200 to Los Angeles, but otherwise stepping onto an airplane is stepping onto an airplane.

There is a slight difference though, and that’ll be clear as you arrive at your seat and stow your carry on bag in the overhead bin.

To be honest, I slightly prefer the A350 overhead bins. They seem larger and slightly more accessible to me, and I’ve noticed that I don’t have to reach as much as I do trying to retrieve my bag after a flight.

Is there really anything that needs to be said about the windows in this A350 vs 787 comparison? I’ve got a lot to say, but telling you my honest feelings would get likely get me blacklisted in the aviation community.

For those that don’t know, both the A350 and 787 have very large windows. As a matter of fact, It’s almost as if the designers approached the problem by saying: “whatever we do, we just can’t make them as bad as the CRJ-200 windows!” Huge props to both Airbus and Boeing for aligning with my hatred of the CRJ.

It’s not all great though. Boeing couldn’t resist the urge to use an electronically controlled dimming system, which, when I first heard of it, sounded like next-level technology. Unfortunately, as most of us know…it sucks. It sucks bad. Not only do these windows have a permanent tint to them, they can be controlled by the cabin crew.

The tinted windows of the 787 are especially bad news for aviation photographers like dose.of.aviation. I can only imagine the profanity coming out of that man’s mouth when they dim the windows on him in the middle of an intense photo sesh.

I guess that means Airbus wins again. Can’t you just feel the rage burning inside of you?

Speaking of winners, just how awesome are the SANspotter Patrons?  Riley Wingo, Joshua bedel, and all of these people have got SANspotter merch coming to them soon. I’m working on it, and my plan is to get it in their hands within the next month or so. The only question is: Will they be brave enough to flaunt it in public?

One of the most exciting things about the launch of both the A350 and 787 was the fact that they were designed from the ground up to offer a better climate control system compared to previous-generation aircraft.

Both the A350 and 787 offer high levels of cabin humidity with less negative effects of pressurization. Remember what I told you early about my inability to proceed beyond high school math? I’d love to inject some intelligent facts and figures to support what I’m saying, but unfortunately – I’m dumb.

Therefore, the best way that I can tell you whether or not these enhancements work is to tell you this: the amount of dried snot that comes out of my head after a long flight on an A350 or 787 is FAR less than any other aircraft types I’ve flown.

Anyway, the higher humidity and lower pressure levels absolutely do make a difference on both aircraft.

You (being as horrifically lactose-intolerant as you are) proceed to gorge yourself silly on two fistfulls of the most delicious creamy (and raw) unrefrigerated delicacies that you’ve ever ingested. Which airplane lavatory would you prefer to spend the aftermath in? The A350 or the 787?

Thankfully for you, I don’t have such an experience to describe to you in excruciatingly vivid detail. However, I have spent time in both lavatories doing completely normal things, and I have to say that there’s no clear winner here.

I’d like to say that the A350 is a generally quieter airplane overall, which makes using the loo a gentle and pleasing experience. However, if I say that, I’m seriously worried about being called an anti-American Boeing hater at this point.

And the winner is…

Hello? Is anyone still here? I’ve got a strong suspicion that 99% of the people who clicked on this article fell into two camps:

Anyway, the three of you still reading are probably dying to know if I’m going to declare a winner in this A350 vs 787 comparison.

And you know what? I’m going to declare the A350 the winner, but not by as large of a margin as you may have expected.

Yeah, I really don’t like the 787 windows. As a matter of fact, I despise them. That being said, it’s a beautiful airplane and a very nice way to fly around the world (in any class).

Given the choice of an A350 or a 787 on a particular route, it would come down to the airline and the seat. I wouldn’t choose one or the other all things being equal, but I would most certainly choose an A350 or 787 over an older aircraft type. Like, say, the CRJ-200.

You seriously didn’t think I’d end this without taking one final jab at that little guy, did you? 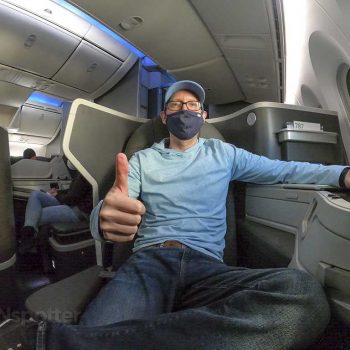 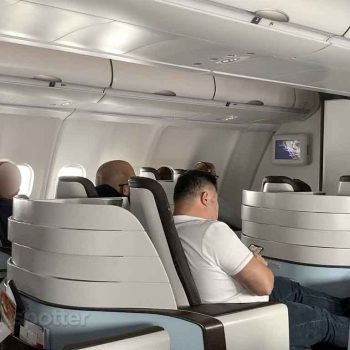 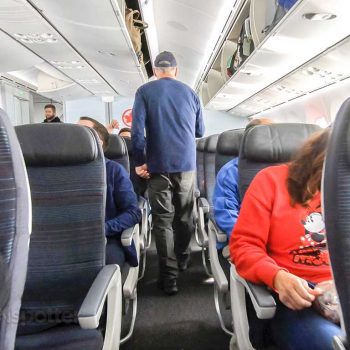 WestJet vs Air Canada: which one is better, eh?