If you would’ve told me 10 years ago that Lufthansa would be serving San Diego with nonstop service to Frankfurt starting in 2018, I would’ve pee’d my pants in excitement as I ran down to the airport with a bag of popcorn and my camera to sit and wait for that first arrival to come in.

Before you start judging me, let me just say this: having British Airways and Lufthansa (and Edelweiss!) here at the same time offering nonstop flights to Europe would’ve seemed unreal to me back then, especially since I was still trying to wrap my head how cool it was that British Airways thought that San Diego was worthy of a daily 777-200 to LHR.

But three major European airlines all at once? That’s impressive for such a small airport so close to LAX, especially for one that has a single runway with challenging terrain on both ends of it (the kind that’ll make flight sim rookies crash and burn every time).

Oh, and no, I did not pee my pants last fall when Lufthansa made the announcement that they were going to serve San Diego starting in March 2018. I can’t say with any confidence that I would be able to hold it in if Korean Air or Cathay Pacific announced plans to fly here though…

The timing of this flight to Frankfurt is pretty much perfect to me. It’s scheduled to depart San Diego at 3:05pm, arriving in Frankfurt at 11:20am. That’s completely out of the realm of departure and arrival times that will cause me to curse, and I was able to sleep in the day of departure while being able to take my time and relax a bit upon arrival in Europe before dinner (even after making an onward connection in Frankfurt).

Do I really need to go into detail about how early I arrived at the airport to check in for this flight? I’m just gonna skip over that completely since it’s getting embarrassing talking about how early I arrive every time. You should all know the drill by now, and all I’m going to say about it was that it was a very simple and easy check in process.

Although – I did find it interesting that some of the Lufthansa staff seemed like they were still learning the ropes. I guess it’s not all surprising considering that they only started flying to San Diego month ago, so they haven’t had much time yet to work out all the kinks.

Part of my reasoning for arriving so early was so that I could take care of necessary pre-trip tasks such as exchanging currency. However, this didn’t go as planned. The currency exchange booth here in terminal 2 was closed, with the ATM next to it being equally inoperable.

Unable to exchange Dollars for Euros and Swiss Francs, there was only one thing left to do: hit Camden Food Company. Don’t worry, I’ll spare you pics of the Healthwhich.

The boarding process started about 40 minutes before scheduled departure time, which kind of threw me off guard since it seemed like the gate area was really empty and I was almost starting to think that there was a delay that only I didn’t know about (a common occurrence in my life). It was almost exactly like the situation flying Japan Airlines out of San Diego last January – the boarding area for that flight was really empty as well, and it ended up being a very light load. So far, it was looking like the exact same kind of scenario.

Despite starting the boarding process so early, it was fully complete about 20 minutes later and I ended up with an open seat next to me. Woo hoo! Having the adjacent seat open always makes economy class massively better, so things were definitely starting off on the right track here.

Headphones were distributed while on the ground, though it felt really weird not to be handed a menu as well. We hadn’t even pushed back off the gate yet and I was already missing business class in a very big way.

My apologies for not having very many pictures of the take off process, since I was seated in the center section of this big A340 and I couldn’t see squat in either direction. I was definitely kicking myself for not choosing a window seat on this flight, because the load factor was probably 50% and I would’ve had an empty seat next to me for sure. But there was no way of knowing how empty this flight was going to be before hand, so I can’t blame myself too much. If the flight is over six hours and going to be full, I’ll take an aisle seat every time.

The good news is that my Instagram buddy Jeff (@cactusops619) was at SAN that day and managed to get a really nice video of the departure. Give him some love by subscribing to both his Instagram and YouTube accounts!

The flight attendants made an interesting announcement 10 minutes after take off. It turns out that they didn’t take on any potable water in San Diego (by choice), since they claimed that their standards for water quality were too high for what San Diego airport could offer. In other words, they had little confidence in what the San Diego County Water Authority does on a daily basis, so there would be little of it on this long flight over to Frankfurt tonight. It was funny watching everybody look around the cabin with wide eyes and confusion as they tried to process what that really meant (which, based on the look on everyone’s face, meant that they were worried that the toilets wouldn’t flush).

It’s been along time since I’ve last flown economy class on a long-haul international flight, so I was pleasantly surprised when the flight attendants came down the aisle with the cold towel service. A hot towel would’ve been preferred, but I certainly wasn’t complaining because this is something that I wasn’t expecting at all.

There were no surprises after that though. The next part of the service was drinks and snacks, with the snacks consisting of a small bag of pretzels. Some things never change.

Something else that hadn’t changed since the last time I had flown in economy class was the chicken or beef option for dinner. There was no explanation beyond that, and we were expected to make an on-the-spot decision based on that vague and painfully simple description. I went with the chicken, thinking that there’s really no way to screw it up that badly and chances were really high that I would like it no matter what.

I watched Downsizing during the meal service, then somehow found myself watching a full documentary on Kim Dotcom (you know, the Megaupload guy). It was mostly because I was hungry and I didn’t want to fiddle around trying to find something to watch, but once I started watching it it held my attention and it ended up being really interesting. It turns out that he’s just a normal guy with a huge and creative entrepreneurial spirit actually, and it was the media that portrayed him as an outlaw oddball. If it weren’t for the in-flight entertainment systems on airplanes, I would never know this kind of stuff.

The LED mood lighting above gradually turned from blue to red, and then eventually everything went dark. I pretty much knew that there was no chance that I would be able to sleep in this confined economy class seat, and the toddler about six rows forward wasn’t making it any easier for me.

It seemed like all he wanted to do was laugh and play just as it was getting dark, which was the exact polar opposite of what I was feeling at that moment. All of his laughing and yelling didn’t phase me though, because I knew I wasn’t going to sleep anyway so it didn’t really matter.

The most frustrating thing was listening to all of the snoring going on around me. It wasn’t necessarily the sound that bothered me, it was the fact that I was jealous as hell of all of those people who were able to sleep so soundly on an airplane. God I wish I could do that too! I was dead tired, but falling asleep seemed impossible. That in turn made me feel frustrated, pretty much sealing the deal that sleep wasn’t going to happen.

But then, out of nowhere, I woke up two hours later. Yeah, I really can’t explain it. Somehow all of that frustration blended seamlessly into drifting off to sleep, and then dreaming about being frustrated and not being able to sleep, when I was actually asleep the whole time.

The only thing that I do know for certain is that it was probably the shittiest sleep I’ve had in years. My head kept falling down into my lap every few minutes, which would hit me with the force of a sledge hammer to the head causing me to wake up in a very abrupt way. This went on for hours and it was miserable.

It wasn’t the head-bobbing that defeated me though. It was the fact that the woman sitting behind me was texting on her phone, and it emitted a peircing “DING!” every time she got a reply. This went on for about 30 minutes before I gave up on sleep completely and turned my video screen back on for good. Thankfully, the flight attendants turned on the main cabin lights just a few minutes later.

There was only one and a half hours of flying time remaining at this point, and the cabin crew did a great job of getting everyone served breakfast in a very quick manner. It wasn’t a very good breakfast if I’m being honest, but it was certainly edible and I did what I could with it.

From there, it was a long and winding descent into Frankfurt, and I think I tweaked my neck a bit as I leaned to the left and right to try to get a good look out the window as we went in for the landing. I didn’t see very much, but I remember quite a bit from flying into Frankfurt on Condor last year, so at least I had an idea of what it looked like out there.

It’s hard to believe that I’ve flown from San Diego to Frankfurt on two different airlines now. For an airport that typically hasn’t seen much international service in the past, it’s really exciting that Frankfurt has established itself as a major link to San Diego! Let’s hope that Lufthansa sticks around longer than Condor did though, because the load factor on this particular flight wasn’t very good.

Lufthansa, I’m totally willing to be your San Diego brand ambassador. Call me. I’ll wear LH T-shirt’s and hats evewehre I go (even to bed), and we’ll get that load factor up! 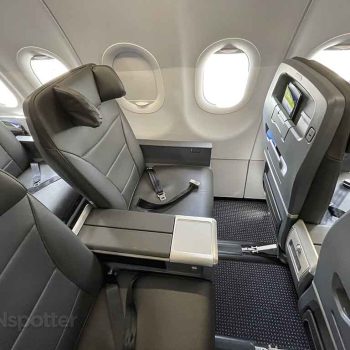 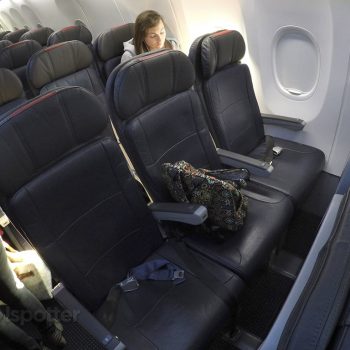 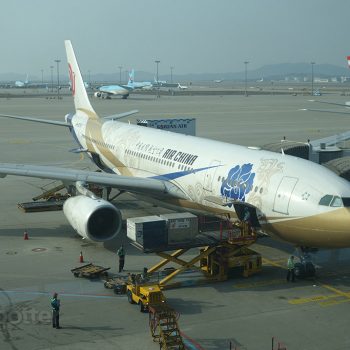