I hate to say it (because it exposes me of more of an idiot than I already am) but, I walked by the entrance to the JAL Sakura Lounge NRT three times before I finally found it. I completely missed that huge JAL Sakura Lounge sign hanging right there on the wall less than 10 feet away from me each time I walked by.

I could clearly see the location of the lounge on the map, and the nice lady at the information desk did well to point me in the right direction, but I swear to God that I’m woefully obtuse when it to comes to directions and wayfinding.

I’ve got some really embarrassing stories to tell about not being able to find something when it was right there in front of me the whole time, but for the sake of keeping any ounce of dignity that I have remaining, I choose to remain silent on that for now.

I was feeling quite ashamed of myself as I was walking through the main entrance, but thankfully the staff was cheery and bright, helping me to brighten my mood and get me ready for some serious lounging.

Oh – it should be noted that the first and business class lounges share the same entrance, but don’t worry about not knowing which way to go. Those ladies at the front desk know all, and all you have to do is just go wherever they point.

The first order of business once inside was to find some lunch. The kitchen is on the upper level, which came as a bit of a relief after my first scan of the entire floor plan and not seeing anything other than drinks and light snacks on the main level. But once I realized that the good stuff was upstairs, it was a mad dash up that grand staircase.

To be completely honest, I’m thinking that perhaps my expectations were a bit too high because I didn’t find the food to be anything amazing.

Yes, there were a few hot dish options, but I was kind of hoping for sushi and there was none to be had. Instead, all I found was very heavy comfort food such as teriyaki chicken, macaroni and cheese, and some sort of beef or pork product that I couldn’t quite identify. Of course there was plenty of steamed rice and miso soup on hand, but I was totally bummed about the sushi thing.

I still had plenty of time before my flight to San Diego was scheduled to begin boarding, so I took my time eating and ended up stuffing myself more than I should have. It was good though, so I wasn’t complaining.

I also wasn’t complaining about how empty this lounge was today. The JAL Sakura Lounge here at NRT is simply massive, but for some reason or another it was completely empty and I essentially had it all to myself. There were a handful of other people who came and went during the few hours that I spent in there that afternoon, but for the most part it was as quiet as a library and it ended up being a really nice place to sit and relax.

On a scale of 1 to 10, I’d give this lounge a solid 7. It would’ve been an 8 or a 9 if fresh sushi was offered, but perhaps they only serve the good stuff like that over in the first class lounge. All the more reason to up my lounge game I guess… 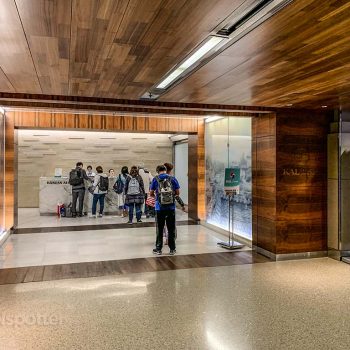 KAL Lounge LAX: everything you need to know for a really great visit