Before booking this flight, chances are pretty good that I would’ve been scouring the Internet in fear looking for easyJet reviews if I wasn’t a travel blogger with an itch to try this airline for the first time. There are a lot of them out there, and I’ll bet there are some doozies filled with profanity and hate-filled vows to avoid them for all of eternity.

I think we can all agree that these kinds of low cost carriers don’t exactly offer the most comfortable and stylish way to travel between two city pairs. And we’ve all heard our fair share of horrific experiences from others as they explain all the things that went wrong with their $14 flight.

But you know what? This isn’t going to be one of those kinds of easyJet reviews. I actually enjoyed this flight from Amsterdam to London quite a bit, and it was nice to finally experience a low cost carrier that didn’t have me cussing under my breath as I waved goodbye to the flight attendants standing at the boarding door (who were likely cursing at me under their own breath)…

There are a ton of really good (and very detailed) easyJet reviews on YouTube already, and because of that, I was seriously considering not even creating a video for this flight at all. But it occurred to me that out of all the kinds of video reviews I make (economy class, business class, first class), it’s actually the low cost carriers I have the most fun with.

At just 7 minutes and 45 seconds in length, this is a short and concise summary of this 44 minute flight. And while there isn’t even one word of frustration-induced profanity in it, I do hope it’ll be a nice addition to all of the other really great easyJet reviews out there in YouTube land already. The music, as always, comes from Epidemic Sound.

Who knew that writing easyJet reviews was so dang fun?

My first ever easyJet experience begins at 5am as I stumble out of the Amsterdam Schiphol Sheraton and down into the main terminal. Other than a few early birds like me (and a handful of others stretched out and sleeping on rows of chairs in the darkness), the place was largely unoccupied. There were no lines. Nobody bumping into me as I stood below the flight information boards searching for my flight. And certainly nobody to inform me that “sorry sir, filming is not allowed inside the terminal.”

Most easyJet reviews probably start out with a few sentences which set the tone of frustration and confusion (just as I was expecting to do with this one), but…walking into a nearly empty AMS this particular morning was quite pleasant actually.

FYI, if you’re not checking any bags, you can’t check in at the airport. Boarding passes must be obtained online at easyJet.com or via the easyJet app (which is pretty good by the way), so at least I didn’t have to take the time to find a kiosk to get my boarding pass.

For what it’s worth, even though they say you MUST check in online, I’m pretty sure there’s a way to do it at the airport if you bat your eyes all cute-like and give them one hell of a sad excuse as to why you showed up to the airport unprepared. They’ll probably charge you a $25 “convenience” fee, but…I’m sure it’s possible.

Thanks to being fully prepared, this easyJet experience was turning out to be just as easy as they said it was going to be. I mean, when you paint “EASY” in big orange letters on the side of all your planes, it better be. I also have to give credit to AMS for being so ridiculously easy to navigate. If there’s one thing I learned even before stepping on the plane, it’s that long layovers are unnecessary in Amsterdam.

Maybe it would have behooved me to read a few easyJet reviews before arriving at the airport this morning, because the boarding process was unexpectedly different than anything I’ve ever experienced before. Things might have gone a bit smoother if I knew what to expect ahead of time!

The first thing that seemed odd to me was the fact that there were a lot (ok, 5 or 6) easyJet planes parked at the gates looking ready to to fly (very soon-ish). However, no gate assignments had been listed on the boards, so the only thing everyone could do was just wander around aimlessly – while checking the boards every 2 minutes or so hoping to see an update…

The other thing I could have learned about reading other easyJet reviews ahead of time was that there are no seats in the gate area. So that means that as soon as they announce the gate for your flight, you need to be committed to stand if you choose to enter the gate right after they call it.

I stood in line for about 25 minutes before they let us out to the plane. Although slightly cold, I was perfectly content since I was standing right next to the door with an awesome view of our ride to London Gatwick this morning.

An entire section dedicated to getting on the airplane

One of the really nice things about these easyJet gates here in Amsterdam is that there are no jet bridges. Additionally, if you’ve got a seat in the rear half of the aircraft like I did this morning, you have the privilege of boarding via the rear stairs.

It’s not very often I get to board a plane via the rear stairs. To the best of my recollection, I’ve only done it twice. Once was on an Island Air ATR-72 from KOA to HNL, and the other was getting off an Alaska Airlines 737-800 at KOA after a 5 hour flight from SAN. Come to think of it, those two flights were part of the same trip (they were back to back flights actually). I guess the moral of the story is to fly in and out of Kona if you want to do it too.

But this is an easyJet review, and I’m getting off track. I will say that getting the opportunity to walk out to the plane under the wing greatly enhanced this experience – though I’m not sure other passengers would agree with me considering how rainy and windy it was out there on the tarmac. I did see some grumpy looking faces!

One word to describe the easyJet A320 interior: wow!

If you found this article in your own desperate quest for detailed easyJet reviews, I’ve got really good news for you. The interiors of these easyJet planes are shockingly nice! Orange and gray was a color combination I was not expecting – and it wouldn’t have surprised me at all to see crinkled old blue vinyl and yellow-stained white plastic on the walls (much how you saw in my Allegiant Air review).

Seat pitch (leg room) wasn’t amazing or anything, but I’ve felt more uncomfortable in United Airlines A320 economy class. It was easy enough to wiggle around a bit in an effort to get comfortable – though the space under the seat in front of me was tight and I was saying “sorry” with each swift kick to my backpack as I tried to wedge it in there.

I keep mentioning that it may have behooved me to read other easyJet reviews before this flight (to better manage expectations), but in this particular instance, I’m glad I didn’t. Seeing how nice these interiors are for the very first time was surprising – and encouraging. Had I been thinking about easyJet all wrong in the past? I think so. So far, this was turning out to be a really great experience!

The entire departure sequence out of Amsterdam was a gloomy mess this morning. High winds and driving rain prevented any decent scenery from appearing in front of my window, and the only thing I have to show you is gloom:

Scheduled flying time over to London Gatwick was a very short 44 minutes, and I wasn’t expecting any sort of cabin service at all on this flight. Still, it was fun to have a look at the menu to see what kinds of food and drink they offer.

Maybe it was because they knew I was onboard trying to get content for my own nitpicky easyJet review, but I was shocked to see the flight attendants do a full cabin service (carts and all) with plenty of time to spare.

Back home in the US, we’d be lucky to be served…nothing but the reminder to feel thankful that we have the means to fly at all. “Ya want water? We’ll be landing in 45 minutes and there are a lot of drinking fountains at the airport!”

Sometimes in life we have to cast our prejudices and pre-conceived notions asiside and approach things with an open mind. As we made the descent into LGW, all I could really think about was how ignorantly uninformed I was about this low cost airline. Seriously – before this flight, I was under the assumption that the “easy” in easyJet meant “easy to make fun of”, but…I was wrong.

This is an airline that lives up to its name, and I found every part of this experience to be incredibly easy and (for the most part) logical. EayJet has simplified the entire process of air travel, from the booking process to the in-flight experience, and all I can think is that we desperately need an airline like this in the US. Yeah, we have Spirit – but they don’t feel like the well-oiled machine that easyJet is.

Finally, now that I’ve returned home with a better feeling about this airline, it has inspired me to wander out into the Internet to check out some other recent easyJet reviews. Not surprisingly, a vast majority of them are positive and I didn’t read a lick of profanity in any.

Who would have thought that an ultra low cost carrier advertising ultra-low fares would be so well regarded by the traveling public? Spirit and Allegiant, take notice! 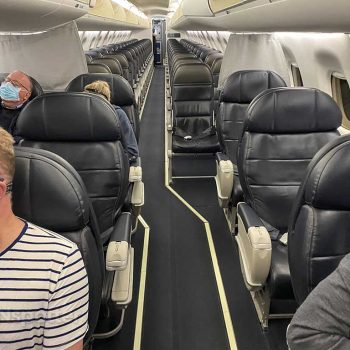