It’s always a bit of a risk taking early morning flight out of SAN – primarily because I don’t like to park my car in long term parking. Since my wife doesn’t drive, it means that I’m at the complete mercy of the local taxi companies. Most of the time they arrive on schedule, but I have been burned in the past with late-arriving cabs that get me to the airport with precious little time to spare. I am happy to report that the taxi for this particular morning arrived 10 minutes early – which is always a great way to start a trip.

I arrived at SAN about 2 hours and 15 minutes early for my 7:55am flight, which to most, probably seems obnoxiously early. I don’t deny it at all, but I did want to have a bit of extra time for some aviation photography before I had to leave.

The Delta check in counter was packed, but I was happy to see that there was no waiting in the first class / Sky Priority lane. I walked right up and was assisted by an agent in seconds. Going through security, however, was a different story. There are a lot of 6:30am flights out of SAN each and every day, and I found myself right in the middle of that group. Even though I was in the first class lane, it still took me about 20 minutes to get through.

I spent the next two hours walking around Terminal 2 West taking pictures of both the new terminal and the airplanes – it’s been a long time since I’ve trolled an airport terminal killing time taking pics, so it was kind of fun to get back at it.

This was also the first time that I’ve been able to spend a lot of time looking around the new terminal here. It’s stunningly beautiful as you can see in these pictures:

My flight to Atlanta was boarding out of gate 48, which didn’t seem to have enough seating area for a packed 767-300 – to say that it was standing room only would be putting it mildly. Of course, this made it especially difficult to dig my way through everyone crowing the gate when first class boarding was called. It’s a frustrating experience to have to do that, and I wish the airlines would police it better.

Once onboard, I quickly found my seat at 4B, near the rear of the first class cabin in this 767. My seat mate was an older woman who seemed pleasant enough, but obviously didn’t have much interest in making small talk. That’s just the way I prefer it actually – I’m not much of a chatterbox, and I’d much rather just sit in silence doing my own thing. Yeah, I’m about as introverted as it gets.

Also interesting to note is that I recognized the lead flight attendant, Marsha, who I’ve seen on several other of my DL flights out of SAN. She’s an older/senior FA who has the best attitude from any flight attendant I’ve seen pretty much anywhere – even more so than what I saw on my recent ANA business class flights. Marsha is phenomenal – she addresses each passenger by name, loves to make small talk, and tries her best to make sure everyone is as comfortable as possible. Best of all, she does all this with a huge smile. Truly a class act.

Marsha began taking Breakfast orders even before we took off, and she made it all the way to the row next to me before she had to sit down for takeoff. Once in the air, she resumed taking orders by starting In the first row of the other aisle. That bummed me out a bit since I wanted to be sure that I had a choice between the cereal and omelet – and the omelet was something I was definitely not in In the mood for this day.

She finished taking orders for the entire second aisle before coming back over to my side, so I pretty much was one of the last ones. The good news is that the cereal was still available – and as a matter of fact, I got the last one. Score!

The rest of the flight was very good, with attentive flight attendants coming through the cabin every 10 minutes to refill drinks or take care of any other requests. I watched Despicable Me 2 on the seat-back IFE, which I thought was hilarious. After that, I napped for the remaining hour and 45 minutes (skipping the second service).

We landed on runway 9R at a gloomy ATL, and found our gate at the very end of the T concourse (gate T1) 10 minutes later. 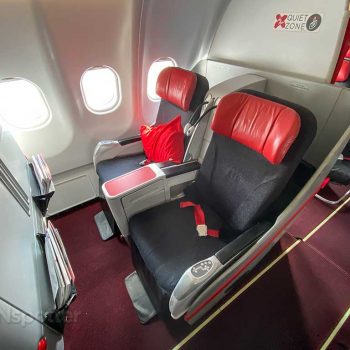 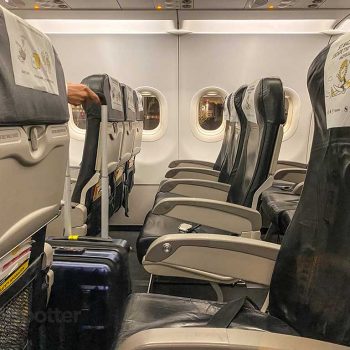 Scoot Airlines review: it’s survivable (if you remember to avoid the food) 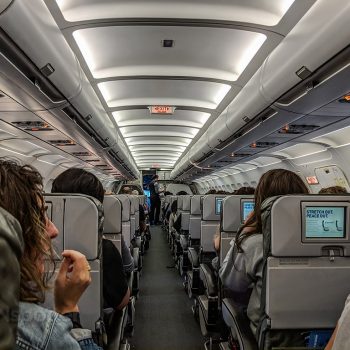