Today was one of those days. You know, the kind that just flows by minute-by-minute and hour-to-hour as smooth as hot melted chocolate and you just can’t help but to feel good inside. I haven’t had a travel day that went this smoothly in a long time, and it was so nice to travel with absolutely no pressure and nary a hiccup the entire way. Seriously – everything went great today, and I wish I could always be like this. Let me tell you all about it…

Here’s the video I created to document this flight:

This flight to Minneapolis wasn’t scheduled to depart until 12:55pm, which gave me ample time to be lazy a bit in the morning. I say “a bit” since my idea of being lazy usually involves exercise of some kind (bike rides or running), but I did sleep in a little so I guess that qualifies as proper laziness! Anyway, being able to start a busy travel day with some exercise usually puts me in a pretty good mood so I was already feeling like the king of the hill even before I got to the airport.

The goodness continued in very large doses once I arrived. The security line took all of 5 minutes to get through, and there wasn’t even a line at my favorite food spot here at SAN. I swear Camden Food Co. isn’t paying me to say this, but starting any trip with a Heathwhich panini swimming around in my belly is the perfect amount of fuel I need to keep me going throughout the day. Well, for a few hours at least.

I had a bit of extra time to kill after breakfast, but doing a lot of plane spotting all over terminal 2 west is a great way to stay busy. I remember back in my aviation photography days spending all day here walking the entire terminal back and forth taking pics of anything that moved, and I specifically remember thinking that the time just flew by. I guess that means that you can put an airplane in front of my face and I’ll be mesmerized for hours. Or something like that…

Boarding was called right on time, which was completely expected based on how my day had been going so far. It seemed as if nothing could go wrong today, and I didn’t want to jinx it, but I just knew that the rest of the day was going to be just as good. Let’s not get ahead of myself though. Here are some pics of the boarding process.

The interior of these Sun Country 737-700s isn’t much to rave about, but it did hurt me a little inside as I walked past the first class seats and shuffled my way back to the bowels of economy class. My last and only flight on Sun Country thus far was in first class, which was actually a really good experience that I would love to try again sometime. I wasn’t as lucky today, but no worries – the way this day was going, you could have strapped me to the roof and I would’ve been just as happy.

It was completely full load today, but luckily there were no screaming kids or annoying seatmates anywhere to be found. At least in my row. Pushback and take off was as beautiful as ever as it is here in San Diego.

Cabin service started roughly 20 minutes after departure, but with me being all the way back here in row 22, it was a bit of a wait before the flight attendants reached our row with that snack and beverage cart. But I was perfectly content to wait – after all, I still had that awesome Healthwhich churning inside of me keeping me happy and feeling not at all anxious for a cup of water and a cheap economy class snack.

The flyover states rolled beneath us one by one as we pushed east, but there was a bit of weather out there which blocked much of the view along the way. No worries though. I mean, how often do we get to look down on clouds, right?

I find it kind of sad that flying is the equivalent of an annoying bus ride to most people, and somewhere along the way the miracle of flight has been lost. What the heck happened? Not too many passengers seem interested in looking out the window these days. Weird I tell ya.

It had been a very long time since I was last in Minnesota during the summer, and I completely forgot how green and beautiful it can be way up here. And those lakes! They weren’t kidding when they said that Minnesota is the land of 10,000 lakes, and I could almost hear the buzzing of mosquitoes flying about as we made our approach into to MSP. Make no mistake about it folks – this is mosquito country, and you don’t dare going outside unprotected this time of year.

It was a beautifully hot and sunny summer afternoon here at MSP when we touched down, and as we were taxiing into the terminal I turned on my phone and I saw that my mother had texted me a photo of my grandfather enjoying a drink on the flight from Atlanta to Minneapolis. They were about an hour behind me, and all along I was curious as to how he was doing on the trip so far. I wasn’t worried though. As I said in the introduction to this trip report, this guy plays golf and bowls twice a week, so a two and a half hour plane ride should’ve been easy for him. And it was.

Apparently we were the first plane to arrive for this early evening bank of flights, because the terminal was completely empty when we docked – but one by one the rest of those gates filled with other bright blue and orange Sun Country 737s coming in from all over the place. They run a pretty good operation here at MSP, and their terminal almost feels like a small regional airport rather than the huge monstrosity that it is over on the Delta side. It’s kind of refreshing actually.

So what are my thoughts on Sun Country economy class? Remember when I said that I thought Sun Country first class is better than Delta first class? Well, I can almost say the same for economy. I found a flight attendants to be generally happier (subjective I know), but the seats and the snacks were exactly the same. The only real advantage that Delta has over Sun Country in economy is the in-flight entertainment product.

With Delta, you get a big video screen in the seat back in front of you, and most content is free. If you want to watch a video on Sun Country, you have to pay to rent a digital video player. That’s not a big deal to me, but it may be for some. I’d still choose sun country over Delta when flying to Minneapolis – in any class. 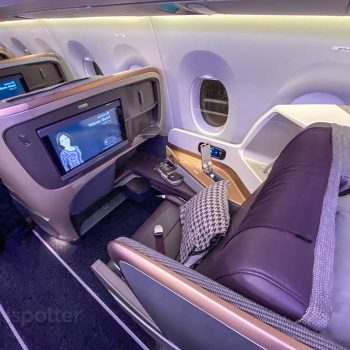