Have you ever found such a great deal on airfare that you book it before having the chance to fully think things through? There was absolutely no way I could have resisted a $500 round trip fare from SFO to KEF on an airline I’ve been wanting to try for a very long time. I just couldn’t. It was right there in front of me, so beautifully impossible to resist, and I made the purchase without knowing (or caring for that matter) what Iceland is like in October.

Maybe it’s the coldest and snowiest month of the year, all the locals are in hibernation, and everything is shut down for the season. It didn’t matter! I was so proud of myself for snagging such a good deal on a really interesting airline that I was prepared to deal with anything. Thinking back on it, it’s kind of scary that I didn’t feel any urge at all to mumble “hold on a sec buddy…” before whipping out my credit card.

The stupidest thing about the entire situation? I wasn’t even looking for flights to Iceland at that particular moment. As a matter of fact, it was a completely spontaneous purchase that happened while I was searching for flights to visit my parents in Florida for the holidays. How I ended up with an itinerary to KEF on Icelandair instead of one to PBI on Delta still confuses the hell out of me, and I’m starting to think that my attention deficit disorder is more severe than I thought and that I need to be examined ASAP.

Here’s the video of me rocking my way to KEF to the beat of music from Epidemic Sound:

This trip to Iceland was one that I had been really looking forward to in the days leading up to it, and I meticulously planned everything out in my mind over and over so that everything would go as smoothly as possible and I didn’t end up missing a flight or anything. But just as luck would have it, my United Airlines flight from SAN to SFO that morning ended up being delayed by two hours and it had me feeling nervous about missing the connection to KEF altogether (which was booked on a separate ticket).

“But at least I won’t have to reclear security up at SFO” I thought, knowing that the United Airlines terminal (3) and the international terminal (G) are connected airside. “That’s going to save a ton of time!”

If only it ended up being that simple. It turned out that this flight to Reykjavik was departing from SFO’s other international terminal (A) which isn’t connected airside to any other terminal. As a matter of fact I was completely unaware that SFO had multiple international terminals, so this really put a kink in the works once I realized that I had to go stand in a really long security line to get into terminal A. The butt-pucker stress level was high enough before that realization, and I was actually starting to think that there was a possibility that I was going to miss this flight.

Thankfully I made it through the security checkpoint with 25 minutes to spare, which was the perfect amount of time to scarf down half of a pastrami and Swiss sandwich as fast as I could before they started boarding. I felt really bad for throwing the other half of that $12 sandwich into the trash as I was running (once again) to the gate, but it was super stinky and I refused to be that guy who brings smelly food onto an airplane.

Smelly food on airplanes is one of my biggest pet peeves in life actually, and I still vividly remember the stench from the days-old fried chicken that someone brought onto a flight from DFW to MSY once back in the fall of 1999. After all these years, I have yet to un-smell it and I’ll be taking it to my grave with me for sure.

I arrived at the gate just moments before the start of the boarding process, and I wasted no opportunity to mosey on up to the podium to see if there was a chance that there was an open window seat somewhere with an adjacent seat open next to it. It turns out that there were a lot of them actually and I had my new “anti-social” boarding pass in mere seconds.

Right away I could tell that this flight to Reykjavík was going to be lightly loaded, and they pretty much let everyone board all at once. The entire process was quick and easy, and there was no waiting during my entire jaunt to the rear end of this 767-300.

I already knew that the seat next to me was going to be vacant, but what I didn’t know was that the entire back half of the airplane was wide open and I essentially could’ve sat anywhere I wanted without a problem. As a matter of fact, the gate agent gave me seat 35A, but there was somebody sitting directly in front of me in 34A, so I moved back one row to 36 so as not to be disturbed by a seat reclining into my lap at any point during the flight.

Once the boarding door was closed and we were all settled in, I was feeling pretty good about my situation and I didn’t have any problems at all with being in the economy class cabin tonight. I don’t mind flying economy class at all if I’ve got room to stretch out like this, so I knew that this was going to be a really good flight and I was already having tons of fun even before we pushed off the gate.

I’m not afraid to admit that I knew very little about Icelandair before this flight, and even as we were climbing out of SFO I was still under the assumption that they are a low-cost carrier. It wasn’t until I returned home a few days later that I learned that it isn’t the case, but it sure seemed like it at the time due to the fact that there were no hot towels, menus, or amenity kits distributed after takeoff.

Something else that made Icelandair feel very much like a low-cost carrier is the fact that they don’t give you a free meal. Other than complementary beverages, everything comes at a cost, and if you want to eat you’re gonna have to pay a mighty sum for it. I ended up choosing the Spanish-style Tapas box, which was really good though quite on the small side (and it didn’t even begin to fill me up). It was right about then that I began to have second thoughts about that Pastrami sandwich thing…

My movie of choice during the meal service was “Breakfast Club”, which is significant only because I have never seen it before and I figured that now would be the perfect opportunity. I’ve seen lots of clips of it over the years, but I never saw it in its entirety up until this point. Is that embarrassing to admit out loud?

There were 5 hours and 16 minutes of flying time remaining after the movie had ended, and by that time some of the sleepy people from the front of the plane were slowly starting to come back here to the rear section to claim entire rows to themselves. After an hour or so, nearly every row was occupied with sleeping passengers.

Somewhere in the darkness over northeastern Canada, the flight attendants came through the aisles with duty-free and Flybus tickets for easy transfers into Reykjavík. I ended up purchasing one of those bus tickets, though it was completely unnecessary to do it on the plane since it would’ve been just as easy and convenient to do it at the airport after I arrived. The worst part about it is that I probably paid a little bit extra for the privilege of doing it on the plane. Oh well – lesson learned.

Sleeping wasn’t very easy on this flight, and that wasn’t because I was trying to do it in a tight economy class seat. No, my eyes were glued to the window the entire time in hopes of capturing a glimpse of the northern lights dancing in the skies on our way over the Canadian north. I’ve never seen them in person, but I’ve been told that they start becoming visible in the month of October so I was really getting my hopes up for the chance to see them for the very first time. And I did! Well, sort of. It was very faint (and not colorful at all) but I did see wispy white Northern Lights just about two hours east of Iceland. It was so faint as a matter of fact that I couldn’t even get a picture of it. But it happened, I swear!

The second and final cabin service started with 1 hour and 50 minutes to go, and my grumbly stomach had me really tempted to purchase something off the menu. However, knowing that we were so close to Reykjavik, I decided to hold off a bit in order to save money. Food is very expensive on Icelandair!

Unfortunately, our very early (6am) arrival into KEF meant that it was completely dark outside and there was absolutely no scenery to admire on the way in. From what I could tell though, it didn’t look like I missed all that much because we came right in off the water – the airport perimeter is right there on the water’s edge, so there really wasn’t much to see other than twinkling lights off in the distance.

In conclusion, I think the best way to sum up my first ever experience on Icelandair is to say that it was a pleasant surprise. The service was good, the seats were decently comfy with tons of legroom, and I didn’t have any issues at all during the entire journey (other than eating things that looked like testicles). However, I do know that having an adjacent seat next to me with tons of room to spread out in every direction might have skewed my opinion to the overly positive side (just a little).

Therefore, I know that it’s unwise to make a final conclusion about this airline until I had the chance to fly them back to SFO on what was scheduled to be a very full flight. Stay tuned for that one – it’s gonna be good, and not just because it’ll be another trip report from SANspotter featuring testicle-looking mystery-meat. 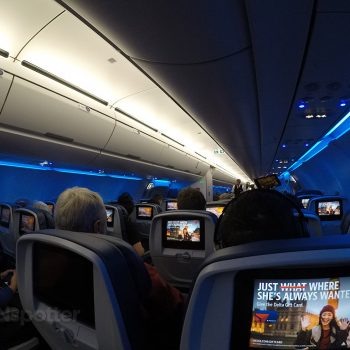