The opportunities to fly Delta 757-200 first class are getting rarer and rarer these days, which is precisely why I jumped at the chance to do it on a recent trip to the East Coast.

As expected, the interiors of the Delta 757-200s are nice enough to make you forget that it’s an aircraft that was designed in the late 1970s. There is modern mood lighting, large video screens at every seat, and pure white / virgin wall textures (free of cigarette smoke stains common on airplanes of that era).

The seats are pretty good too. I wouldn’t go as far as to call them “virgin” though, as these 757s have been around a while. I’m not even going to attempt to calculate the number of a***s they have cradled over the years.

I’m old enough to remember a time when the 757-200 was the go-to aircraft for long transcontinental flights. Delta still uses them for flights out to the West Coast occasionally, but they have been mostly relegated to shorter flights along the East Coast. In this review, I will be documenting my recent short-but-sweet flight from Atlanta to Richmond, VA.

I arrived at ATL via Delta A321 first class from San Diego. We parked at the T gates, with just under 2 hours to spare before the scheduled departure to Richmond. For those of you unfamiliar with how long of a layover you need in Atlanta, that’s almost too much time. But you know me. I made the best of it.

The boarding process for flight number 1266 to Richmond

Prior to this flight, it had been 5 long years since my last Delta 757-200 experience (which just so happened to be a ride on one of the Delta One 757 aircraft). It’s not like I’ve been purposefully avoiding these aircraft or anything. It’s just that they’ve been replaced by newer aircraft on the routes that I typically fly.

Anyway, the boarding process started right on time, and there was no cussing or fist fights as everyone tried to secure their place in line. So far so good.

Even though it had been almost 8 years since my last domestically-configured Delta 757-200 first class experience, I stepped onboard this aircraft already knowing what to expect. Delta Air Lines is the absolute master of fleet consistency.

Remember my Delta 737-800 first class review? I don’t mean to spoil the surprise, but what I’m about to show you is going to look nearly identical. And that’s a good thing, because I quite enjoyed that experience.

The departure out of Atlanta

I was having major flashbacks as we pushed off the gate and taxied out to the runway. 10 years ago, a Delta 757 out of Atlanta usually meant a trip out to the West Coast (for me anyway). They’ve become horribly inefficient for that sort of thing unfortunately, so Delta seems to be restricting them to shorter flights closer to home.

Which is a shame, because 757s were pretty much everywhere just as I was spreading my wings as a frequent flyer. That’s why I was very much looking forward to experiencing a 757-200 takeoff again – just for old times sake.

Large and extremely responsive video screens help to make these crusty old 757s seem modern and new. You’d really never know how old these aircraft really are simply by swiping through all of the video and TV entertainment options. Unless you’re a hard-core AvGeek like I am. Then you would know for sure, and you’d try your best not to think about it.

Total flying time from Atlanta to Richmond was 1 hour and 5 minutes. This is far beneath the 2 1/2 hour threshold that Delta uses to determine whether or not there will be actual food served. Because of how short our flight was, all we got was drinks and snacks.

On flights over 2 1/2 hours in length, you can expect a full meal service with several options to choose from. And they’re all really good too. Here are a few examples from some of my recent Delta domestic first class flights:

How comfortable are these seats on longer flights?

A short flight from Atlanta to Richmond is hardly the opportunity to assess how comfortable a seat is for longer flights. However, since I’ve done plenty of longer flights in the same exact seats on other aircraft, I can assure you that they are decently OK.

There’s no lumbar support in these seats to speak of, but the materials are squishy enough to be somewhat comfortable. For most people, that’s all that really matters. Oh, and seat recline is decent as well. It actually helps to alleviate some of my lower back issues.

The descent and arrival into Richmond

I love flying into new-to-me airports. Yes, Richmond isn’t all that far from Washington DC (a place I’ve been to many times), but it’s always fun to add another airport to my flight log. If anything, it helps to make me look more authoritative and experienced than I really am. lol…

That said, it was a beautiful afternoon for our arrival into Richmond Virginia.

Even though the first class seats on the Delta 757-200 are exactly the same as you’ll find on other domestically-configured Delta aircraft, I like these the most. The 757 is truly unique. They don’t make airplanes like this anymore, which is a real shame, because it’s an absolute pleasure to fly on. 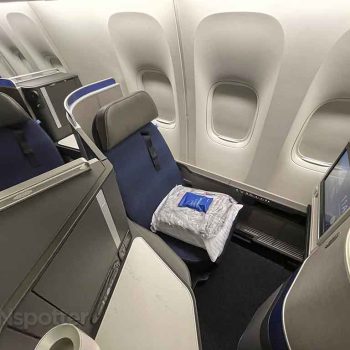 United 777-200 business class review: is it worth the upgrade?