Why is it that the most interesting aircraft only fly at the most inconvenient of times? American Airlines has like a billion flights every day between Phoenix and San Diego, and nearly all of them are on 737s or the more typical A319/20/21 family of aircraft. There is one exception of course, which happens to be a 757-200 departing Phoenix at 8:20 AM and arriving in San Diego at 9. Oh, come on! Why so early?

The 757 is one of my most favorite airplanes of all time (mostly because it’s not a generic 737 or A3somethingorother), and these days I’ll go pretty darn far out of my way to get a chance to fly on one of those things. Even if it means getting up at 6 AM on Sunday morning.

The only nice thing about flying that early on Sunday mornings is the fact that security lines are generally short and it never takes that long to get through. If I was a little bit more awake I probably could have appreciated the fact that I made it through the entire security process in less than five minutes.

That had to have been a record of some kind for me in this airport, because I always get stuck in the slowest line. The stars were definitely aligned this morning, but unfortunately I was too tired and groggy to realize the significance of what had just happened.

Having spent nearly the entire day on the road yesterday, waking up super early on a day that I didn’t have to go to work was especially difficult. Choosing to fly on a Boeing 757 instead of an A320 several hours later sounded like a fantastic idea at the time that I booked this ticket, but I wasn’t into it as much as I thought I would be once I was actually there living the experience. Sleeping in is always the better option. Always!

Once through the security checkpoint, everybody else ran for the nearest coffee shop (collectively) in order to stand in yet another line. I was able to bypass all of that nonsense since I don’t drink the stuff.

I guess that’s one good things about having never developed a taste for coffee! Skipping breakfast is not an option for me however, so I do have to pay dearly for having to buy food at exorbitant prices at the airport in the mornings.

I only had about an hour or so to wait before the flight to San Diego started boarding, so I spent most of the time eating breakfast and wandering around taking pictures as the sun was coming up over the horizon.

I had considered checking out the Admirals Club here in this terminal, but I wasn’t in the mood for it considering that it looked as if it was more crowded in there than it was the main terminal. Airport lounges aren’t always the oasis they claim to be!

As I was standing in line to board the plane, I couldn’t help but wonder why they are using one of their largest domestic aircraft in the fleet for the early morning flight to San Diego.

I wouldn’t have thought that there would be enough demand to warrant such a large aircraft, but apparently such is not the case and American Airlines knows a heck of a lot more than I do about the amount of passengers traveling between Phoenix and San Diego at that time of day. I’ll trust their judgement.

Once onboard and having plopped my butt down into the seat, I realized that this is the first time in my life that I had ever been on an American Airlines 757. That’s kind of significant considering that I’ve been on over 100 757 flights in my life so far, and American Airlines had one of the largest 757 fleets of any airline not too long ago.

How I managed to avoid each and every one of those things is quite impressive actually. I have no idea how I did it, but it’s a fun tidbit of SANspotter trivia that you probably never knew. Unless of course, you study my flight log every night memorizing every flight that I’ve ever taken…

It took a while for the first-class cabin to fill up, but it eventually did and it was a full house once we pushed off the gate. From there it was a short taxi out to runway 7L and we were on our way to San Diego.

I realize that this post is all about the American Airlines 757-200 first class experience, but the fact of the matter is that flying time between Phoenix and San Diego was a short 49 minutes and there wasn’t much happening to warrant thousands of words about the experience. Yeah, the flight attendants came by offering snacks and beverages, but there were no made to order omelettes or pancakes offered, and all I could do was just sit back and enjoy the scenery of the dry desert landscape passing by below.

Ok, it was too early for omelettes and pancakes anyway, and the truth is that I wasn’t even feeling hungry as we swooped in over Balboa Park and Little Italy before dropping down on runway 27 here at SAN. I was feeling a bit nostalgic though, considering that I used to fly on 757s all the time and I wouldn’t even be able to count all the times (without looking at my flight log) that I arrived San Diego on one of these birds over the past 20 years or so. It used to be such a common occurrence back then, but today it felt a little bit special and oddly different from all the 737s and A320s that dominate this airport now.

I hope you enjoyed this quick little trip to Arizona (and SFO) with me! Next up will be a very quick series of trip reports about my first class experience on Alaska Airlines to Florida and back. And I do mean quick – there will be no hotel reviews or anything else to go along with this one – unless of course you’d be interested in reading a review of my parents house. Come to think of it, that would be pretty funny actually… 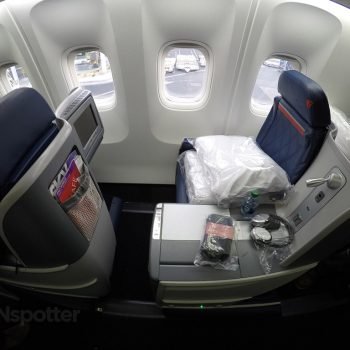