The flight down from Detroit was more frustrating than it was fun, but I’m never one to hold a grudge and I can get over negative feelings much quicker than most. I know all too well that expecting everything to be perfect and smooth is an awesome way to make life miserable, so that’s why I was feeling chipper and excited again as I was hovering around the gate area in the moments before this flight to SEA started boarding. I was so ready for this Delta One 747 flight!

If you’d like to jump ahead and watch a video I made of this experience, here you go:

And now, on with the words and pics:

There were several really good reasons for feeling upbeat about this flight. First of all, Delta pretty much knew they screwed up with the two hour delay coming out of Detroit this morning, and went all out with the snacks and beverages in the gate area as a way of saying “sorry” to 300 delayed passengers. I didn’t partake in any of that since my butt was about to be planted firmly in a comfy Delta One lie-flat seat for the next 5 and a half hours, but I appreciated the gesture.

The second reason was that there was a bit of an “AvGeek” party atomosphere in the gate area, much more than what I experienced up in Detroit a few hours earlier. It was obvious that there were many people who chose this flight just because it was a 747 – it was standing room only at the windows, and trying to get a pic of the 747 sitting at the gate required the use of aggressive elbows to find an open spot suitable for getting a pic or two.

Finally, about 10 minutes before boarding started, the captain came up to the podium and personally welcomed everyone to the 747 (as well as apologizing for the delay). The claps and cheers at the end of the welcome announcement made it that much clearer that I was in the company of some pretty hardcore AvGeeks here in Atlanta, something I’ve never experienced on any other flight in my life. This was going to be fun!

Delta One passengers were invited to board first, and I wasted no time getting myself into the queue and stepping back onto that airplane. I was in full trip report mode at this point, getting all the pics (and video) I needed in order to make this a truly epic flight review, and I was doing a pretty good job of it if I don’t say so myself.

I was just finishing up getting the pics I needed when that all too familiar voice of the captain came over the PA system. At first I thought he was offering us yet another friendly welcome to the 747, but the tone in his voice made it clear that he didn’t have anything good to say this time. Long story short, a fuel leak was discovered, and they needed everyone off the plane so that they could work on resolving it. Estimated time for the repairs were an hour to an hour and a half, and as soon as he tacked on a “maybe longer” at the end of that sentence I knew we were screwed. Telling passengers that there was “no rush” to get off the plane didn’t help either, as that made it clear that this delay was going to be a doozie.

As I was walking off the plane, all I could think about was my Alaska Airlines connection I had in SEA later that afternoon for my flight home to SAN. That was a separate ticket, and I was now faced with the real possibility that I was going to miss that if they didn’t get us out of ATL within the next two hours. Normally this sort of thing isn’t much to fret about, but this was Thanksgiving weekend (the busiest travel weekend of the year), and flights were sure to be booked solid. Oy vey.

I tried to put it out of my mind as best I could with a $10 sandwich purchased somewhere down the halls of concourse E. I took my time with it, hoping for the best, but by the time I finished and checked the boards, I saw that the new estimated time of departure was 3pm. Dang it. There goes my Alaska Airlines connection at SEA.

I was so scared to even look at what it would cost for a walk-up fare for a flight out of SEA to SAN later that evening, and I even started to prepare myself for the possibility of having to rent a car and drive. Oh man – I love road trips, but I was not prepared for two full days of driving considering I was very much looking forward to sleeping in my own bed that night. With my hands trembling (or at least it seemed that way), I opened Google flights on my iPhone to see what the cheapest flight from SEA to SAN would be that evening. Long story short, it wasn’t as bad as I thought it would be, and I ended up purchasing a flight on Delta to get me home. More on that in the trip report for that segment…

As I was finalizing the purchase of that flight, I noticed that the gate assignment for the continuation on to SEA had been changed. But the 747 was still parked at the original gate. Uh oh. That meant an aircraft swap. Will we still get a ride on the 747 to Seattle? Unfortunately, no. Sitting at the new gate was an Airbus A330-300, which disappointed many (including myself). But all was not lost. I’ve never been on a Delta A330 before, so I was a bit happy to get the opportunity to review a new-to-me product.

I feel sorry for all of those who wanted nothing other than a 747 though. There were many disappointed faces in the gate area waiting to board that flight, and I could truly empathize the feeling of being denied the Queen of the Skies. 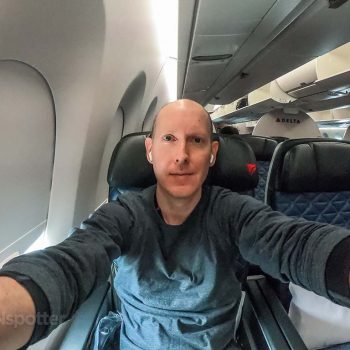 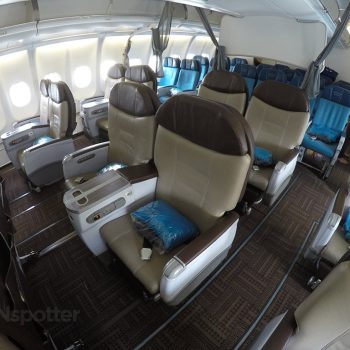