Having just finished a full trip report on one of the most bland domestic flights in existence today, I’m right back at it again with another detailed review of a flight so dull that it was impossible to remember without looking at my notes. One of the first things I learned about writing trip reports a few years ago is to take good notes during the course of the flight – otherwise I’ll never remember all the little details no matter how many pictures I take along the way. It was especially true in this case because this flight was three weeks ago and I’m already scratching my head trying to recall anything interesting about it. Looks like I’ll need the help of my notes for this one…

Because this was an 8am flight, it didn’t require rolling out of bed at a ridiculously early hour. I’m very much a morning person anyway, so getting the chance to sleep almost up to my normal waking time was very much appreciated – though I didn’t feel like it at the time. I felt rather groggy as I was preparing to leave, largely unaffected by the excitement of starting a new adventure. It takes more than an American Airlines 737 to get me going!

The process of getting an Uber ride down to the airport and passing through security went by in a flash, which did catch me a bit off guard since this was the Thanksgiving travel weekend (the busiest travel weekend of the year) and I was expecting the worst. Yeah, I was ill prepared to be moving with such vigor that morning due to how smoothly everything was operating.

I spent a bit of time hanging out in the west side of terminal 2 (which is a lot nicer than the east side), and it was nice to enjoy a yogurt and banana while watching the sun rise. It’s so hard to eat clean in airports, but I did my best to be healthy!

My lack of enthusiasm this morning worked out pretty well actually, because by the time I slowly meandered all the way back to gate 30, I only had to wait a few minutes before they started the boarding process. Gate 30, by the way, is the gate I hate the most here in terminal 2. There are absolutely zero views of the aircraft available from here. Seriously – there’s not a wingtip to be seen no matter how far you crank your head around one of the tiny porthole windows.

I was one of the first to board the aircraft thanks to the word “priority” stamped on my boarding pass, and I wasn’t even aware of that being a perk for spending a few extra bucks for a Main Cabin Extra seat. I’m never one to complain about things like that though, and I stepped onboard feeling just a little bit extra special for it. Well, not really.

I don’t fly American Airlines mainline very often (the last time was this time last year from LAX to JFK), and I’ve got to say that I really like the interiors of their aircraft. Dark gray cloth and nice leather looks great against the red and blue LED mood lighting, and it’s so much classier looking than the loose blue leather that seems to be the default on many other airlines. I really like the simplicity of the design, but I can imagine that there are others who would consider it to be too boring.

It was shaping up to be a beautiful late November morning in San Diego as blasted off runway 27 (on time no less), and as usual I spent the first 20 minutes of the flight with my nose glued to the window taking tons of pictures and video of the departure sequence. I find it amazing that after all these years, the simple act of taking off (and landing) fascinates me just as it did when I was 8 years old. I was absolutely terrified of flying back then however, so that’s one thing that’s changed. I guess growing up in the 80’s (when air safety was more questionable) had quite an effect on me. I loved flying but all the crashes I read about and saw on TV were terrifying!

I’m happy to report that we didn’t crash on take off (woo hoo!). But it was a bit bumpy, and the captain did say it was going to be rough going for the first portion of the flight. Because of that, the flight attendants remained seated for quite a while after departure and the service didn’t begin until one hour of flying time had passed. But it wasn’t so bad actually – just a bit of minor chop, but nothing worth making a big deal over.

I nibbled on my sack lunch during the service, while watching Veep on the personal video screen. Much to my surprise, American shows uncensored content as part of their in flight entertainment system, which was surprising and very much welcomed. Veep (and other HBO original series) are much better in their original form!

I watched a few more episodes of Veep before succumbing to sleep, though I think I’d actually just call it light dozing instead. I haven’t slept properly in an economy class airline seat since I was in my early 20’s, and I think it’s only going to get worse from here on out. Hopefully I still have a lot of flying years left in me before I’m unable to even sit in airline seat anymore.

The second drink service started with about 50 minutes of flying time remaining, and I was still dozing at this point so I passed. But I do recall thinking that the flight was going by really fast – much faster than I expected actually, which is a pretty good feeling when seated in the economy cabin.

The weather was perfect and the skies cloudless the entire way across the country today, so I was really hoping for a nice low flyover of downtown Chicago as we made the turn for a westerly landing at ORD. Unfortunately, the aviation gods weren’t playing nice today and Chicago was socked in under a layer of dense low clouds that didn’t dissipate until we were nearly on the ground. So much for getting pics of downtown Chicago on approach! I was hoping for the same thing the last time I flew into Chicago, and I wasn’t lucky then either. I’ll get the shot someday – I’m determined as ever.

So there you have it. A full trip report for a dull flight that was nothing but routine, put together from notes I took during the flight. This would have been a lot shorter if I had to do it all from memory, which may or may not have been all that bad considering what this flight was. But the good news is that the next several flights in this series were interesting enough for me to write gobs of text without even looking at my notes, so stay tuned for those! 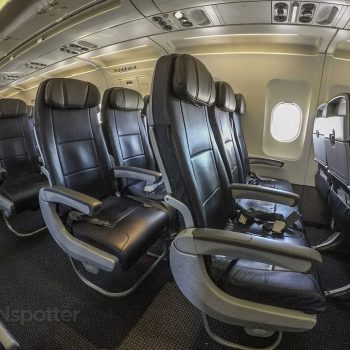 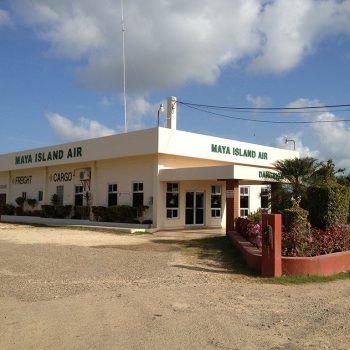