The Aeromexico Lounge in Terminal 2 of the Mexico City Airport (more formally known as the Salon Premier Club) is a perfect example of why I’m not always a big fan of airline lounges.

It’s small, dark, and the food options are limited. If you’re unfortunate enough to arrive when the majority of the seats are taken (which is almost all the time), it’s about as comfortable as hanging out down at the local DMV office. I only lasted about 10 minutes before I had to go back out into the main terminal. This Aeromexico Lounge wasn’t for me.

Where is the Aeromexico Lounge located at the Mexico City Airport?

This is a really easy lounge to find in the Mexico City Airport. Upon clearing the security checkpoint in Terminal 2, turn right and look up. The Salon Premier Club is located on the second level above the main departures hall (between the two individual concourses).

Warning: getting up to that second level isn’t all that intuitive. There are elevators and stairs located at the far ends of the departures hall – which is a long walk from one end to the other. There might be another staircase somewhere in the middle, but I couldn’t find it. Long story short, be prepared to walk for a bit before you find the stairs.

The layout of the Aeromexico Salon Premier Club

The good news is that the Salon Premier Club in Terminal 2 at MEX has been completely redesigned since my last visit back in 2016. Thankfully, most of the changes have been for the better.

This is a fairly small airport lounge with two levels:

In my opinion, this is a really good looking lounge. It looks a lot better than it did back in 2016, though it has been reduced in size quite a bit.

I have to give the designers of the Mexico City Salon Premier Club a lot of credit for making good use of a challenging floor plan. The two fully-staffed bars take up a majority of the space. The rest of this lounge is filled with a combination of open communal seating, along with private nooks and crannies separated from everything else with dividers.

There’s also a quiet room located at the far end the lounge. It’s really dark, and it has a strong “VIP room at a strip club” vibe going on. It’s awkward, but at least it’s quiet.

Is the food any good?

What food? I was unfortunate enough to time my visit between meal services (there was noting available). I could see the kitchen staff working hard in the background making the transition between breakfast and lunch – but I wasn’t patient enough to stick around to see what they were whipping up.

Looking around, I did see some people nibbling on what looked to be little pizza wedges. It looked fine, but cafeteria quality at best.

I found the snack options to be very limited as well. The only thing that I could find was a small snack basket with a variety of granola bars and chips. The nonalcoholic drink selection was pretty good though. They had pretty much any kind of drink you could think of.

How to get into the Aeromexico Lounge at MEX

Getting into the Aeromexico Lounge in Terminal 2 of the Mexico City airport is fairly easy (at least how it is compared to lounge access back home in the US). Here are the most common ways to do it:

When is the best time to visit this lounge?

I arrived in Terminal 2 approximately 4 hours before my departure to Tijuana, so I had a lot of time to observe how busy the Salon Premiere Club can get.

Basically, I found that it’s always extremely busy in the hour or so leading up to a large bank of Aeromexico flight departures. Since the timing of these flight banks are always fluctuating, my best recommendation is to show up early for your flight, wait for the next bank of flights to clear, and then go to the lounge.

Otherwise, it’ll be pure hell trying to get in (and then finding a place to sit). The food disappears really quick during these times as well, so it most likely won’t even be worth it – unless you’ve got a bad hankering for a shot or two of tequila.

Overall, I think that the Mexico City Aeromexico Lounge could be a lot better if it was just a bit larger. It was just too intimate and dark for my tastes, but that’s not saying much considering that I don’t normally like hanging out in airport lounges anyway. But before I get too far ahead of myself, here’s a list of all the pros and cons: 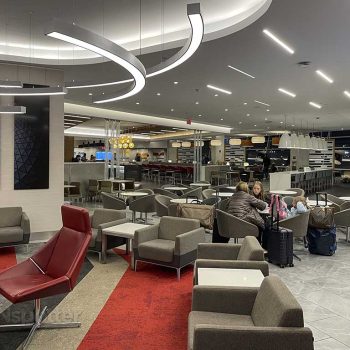 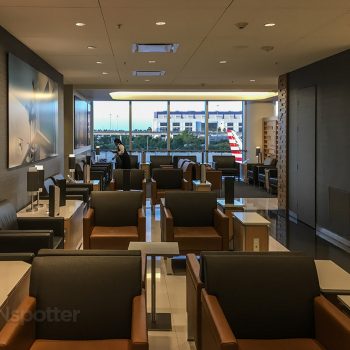