There’s not really much that will make a traveler’s butt pucker faster than realizing that they inadvertently booked a Tokyo connection which involves flying into Hanada and departing out of Narita (or vise versa). It’s a very easy mistake to make actually, since many airlines and multiple airline alliances have a large presence at both airports and it’s often necessary to transfer between the two in order to get the best flight options.

Having two major airports serving the same city certainly has its advantages, but it also causes a heck of a lot of confusion sometimes. Especially here in Tokyo! Haneda and Narita airports are very far apart from one another, and depending on freeway traffic (which is usually just nuts), it often takes over an hour to get between the two. So, you need to pay especially close attention whenever you book a flight that involves a transfer in Tokyo, because you just may end up having to do the Haneda to Narita shuffle. 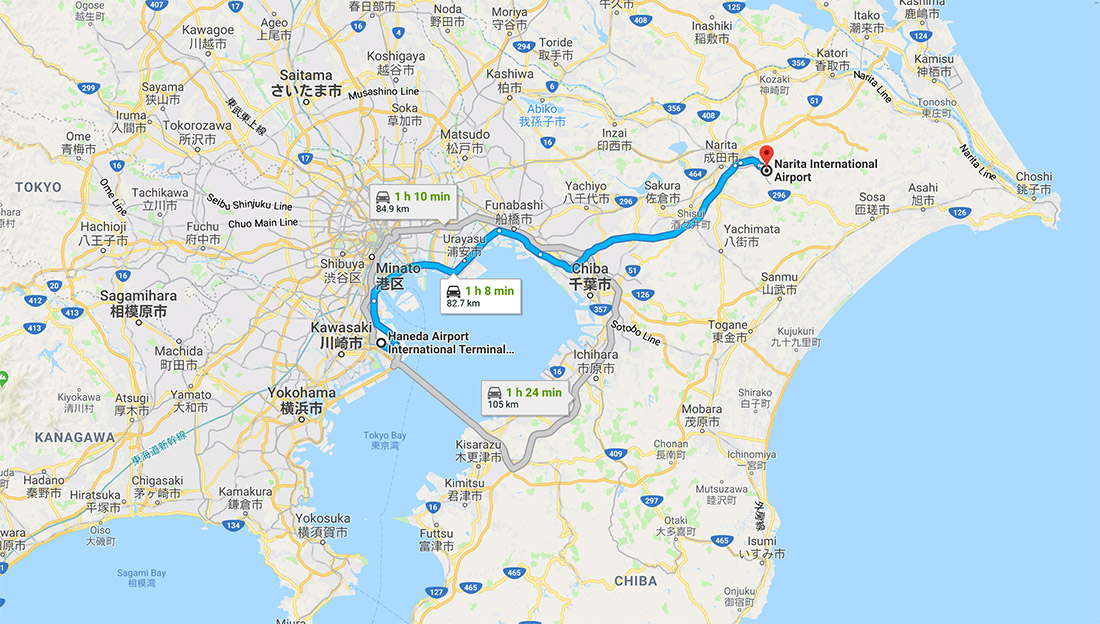 The route between Haneda and Narita airports. It may not look that far, but it can take over an hour!

Thankfully, the Japanese are experts in areas of public transportation and customer service. The Haneda to Narita airport shuffle probably sounds really scary to anyone who hasn’t done it before, but I’m here to tell you that it is extremely easy and I had no issues with it at all – which was surprising to me considering that my Japanese vocabulary consists of roughly 10 words and two short phrases. “Nice to meet you” and “My name is Scott” certainly does come in handy now and then when traveling around Japan, but it did absolutely nothing to assist me in figuring out how to do this one-hour bus ride.

First thing you need to do is find the kiosks that sell bus tickets. There are several bus ticket kiosk stations in the arrivals hall of both airports, so follow the signs (which are also in English by the way). Look for the orange kiosks – those are the ones that sell the airport-to-airport bus tickets. 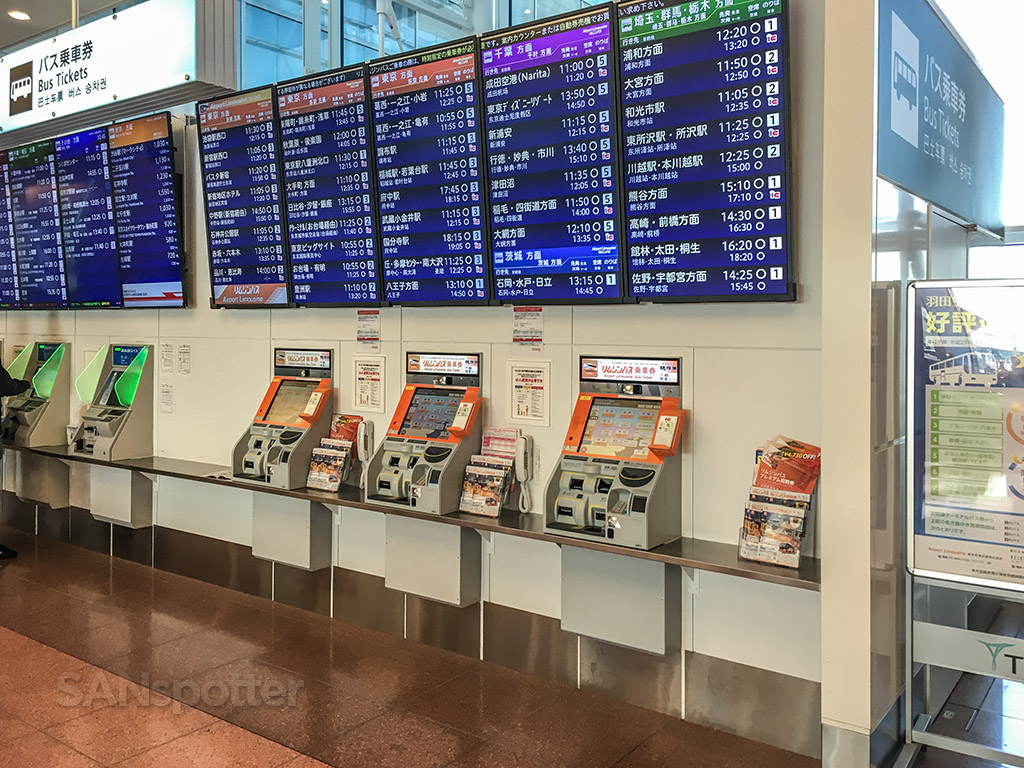 Have no fear – even if you can’t speak a lick of Japanese, these orange kiosks are super friendly and easy to use.

The first screen of the kiosk will ask you to choose a language, and from there just follow the prompts and insert cash or coins whenever it tells you. Trust me, I’m an idiot (always) when it comes to figuring out public transportation, but these kiosks are super easy to use and I had a bus ticket in my hand in less than 30 seconds. 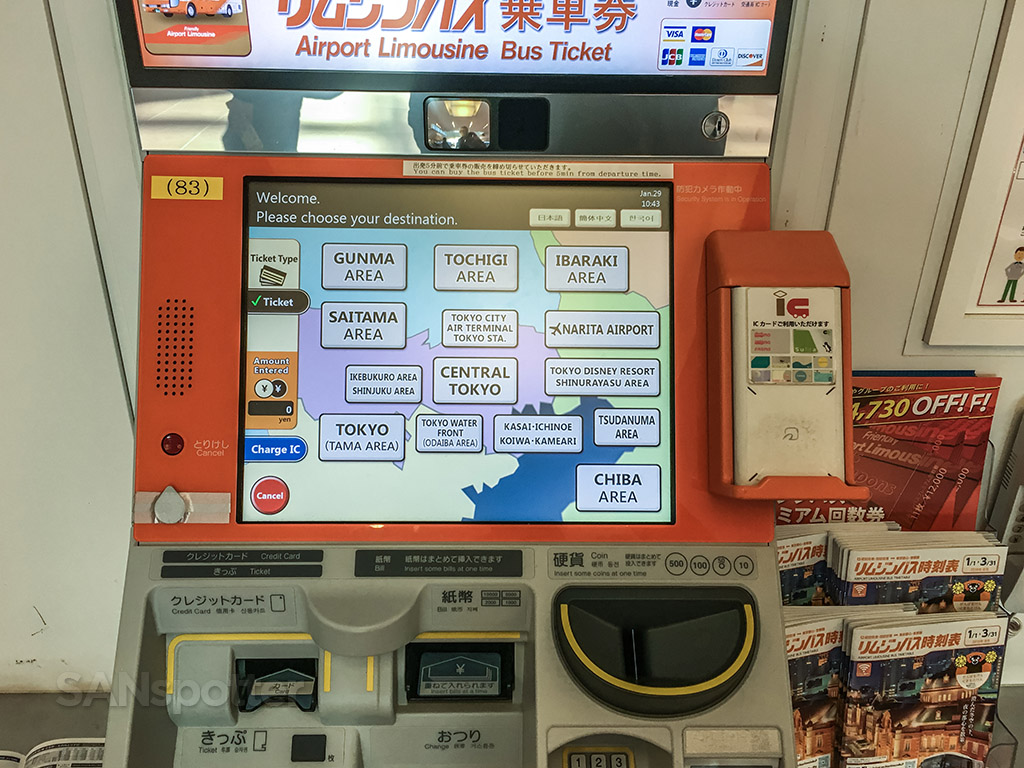 So easy that even a preschooler (and SANspotter) could use it.

Once you have a ticket, follow the signs to the bus terminal. Your ticket will say which platform the bus is leaving from, so just make your way down to the bus terminal and find the platform which is printed on your ticket. All signage is in Japanese and English, so it’s super easy to figure out. 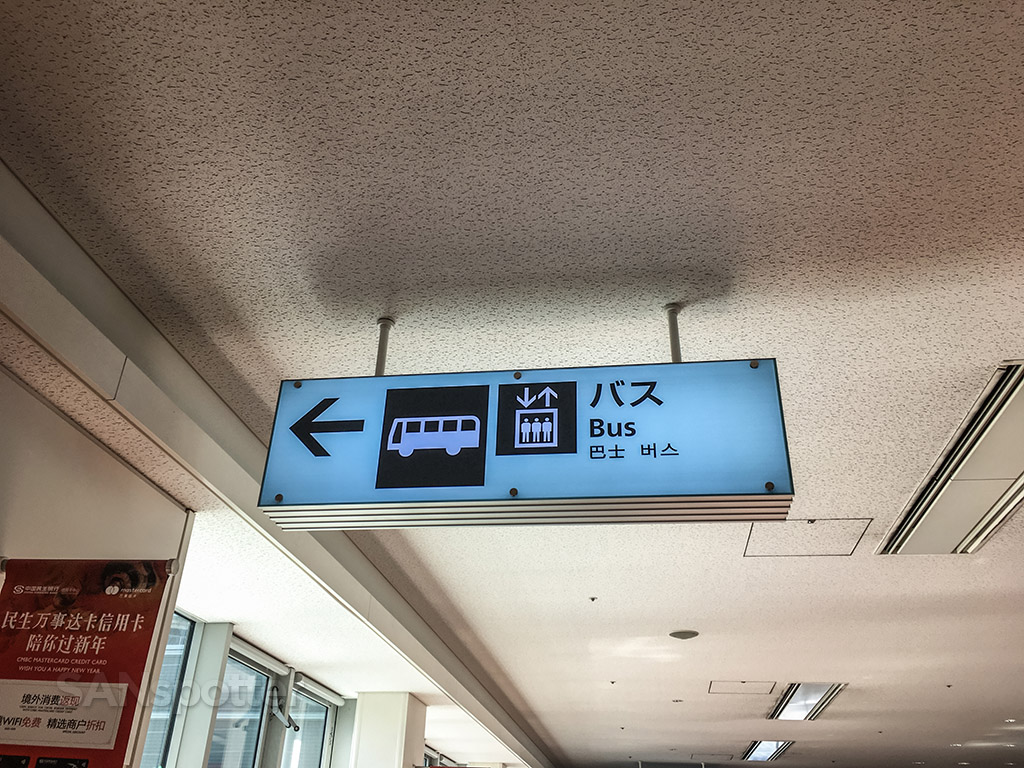 Have you ever seen Totoro? Remember Cat Bus? Considering that the Japanese use cartoon characters for everything, I’m slightly disappointed that Cat Bus isn’t the mascot for this airport-to-airport bus service. 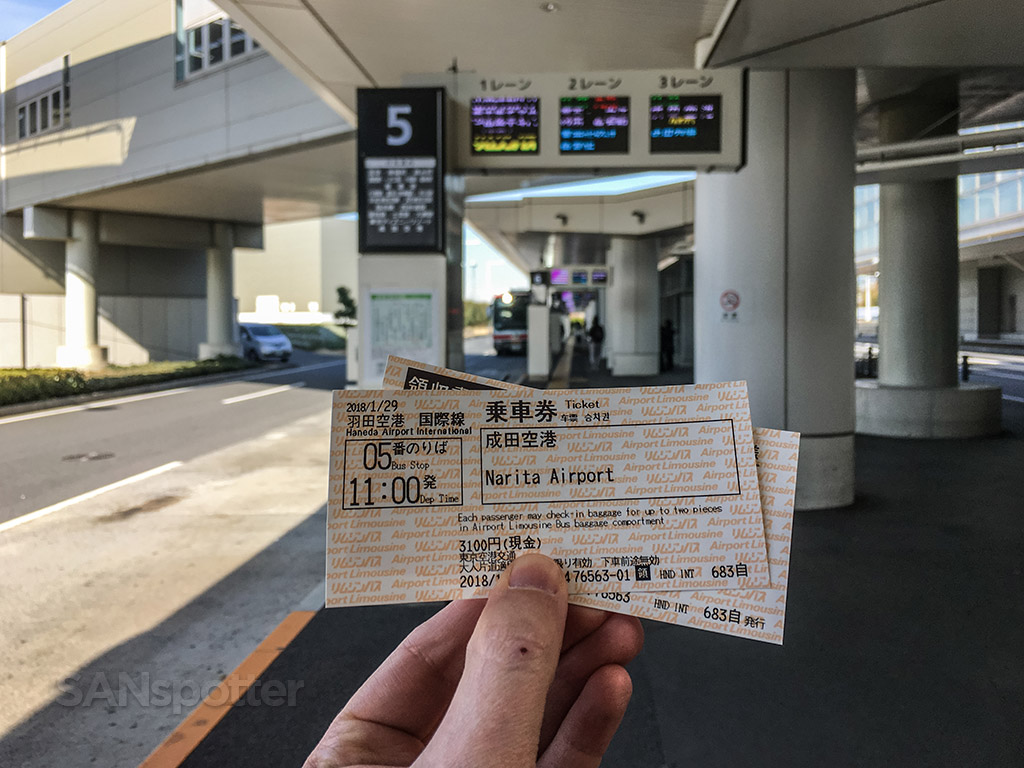 In search of platform number 5. Where the hell is number 5? 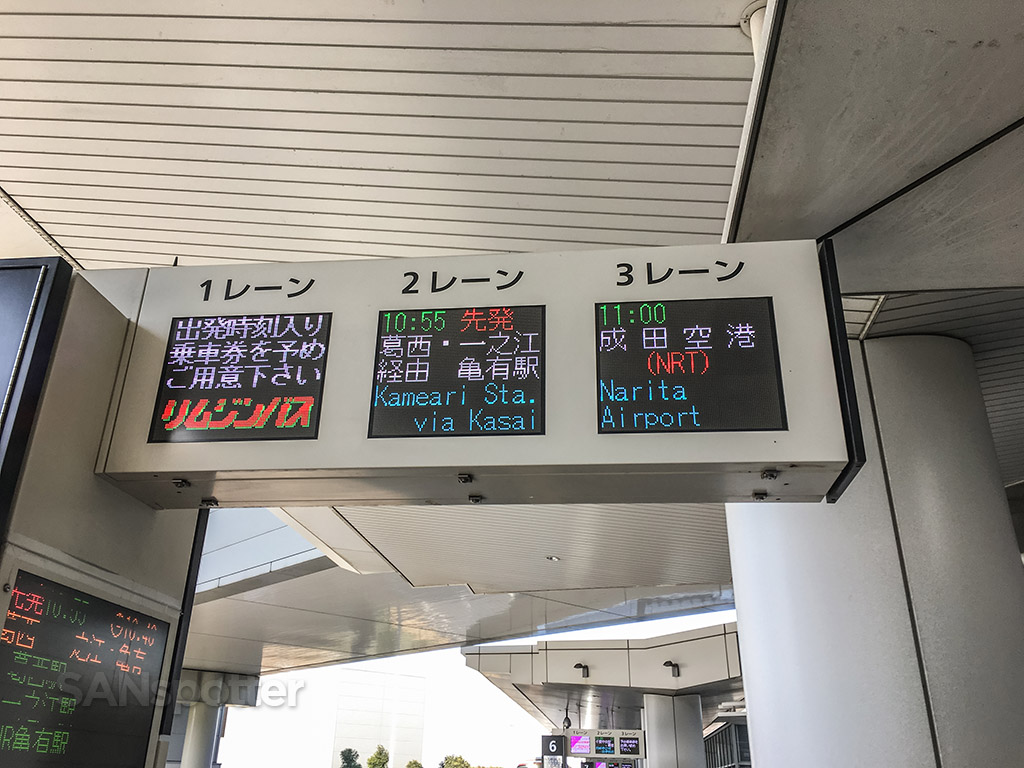 Thank God the signs are also in English, because I’m so dumb that there’s a good chance I would have been waiting at the hotel shuttle bus platform for hours, wondering when the hell my ride to NRT would show up.

I was about 10 minutes early for my 11:00 AM ride to Narita, so I hovered around a little bit waiting for it to arrive. But this is Japan, where order and organization are the pillars of the culture, and I soon found myself being herded into a very neat and orderly line (behind a clear marking on the ground) by one of the bus company employees who was attending this platform. He took my ticket, thanked me profusely for waiting, and I stood there for a few minutes longer until the bus arrived. 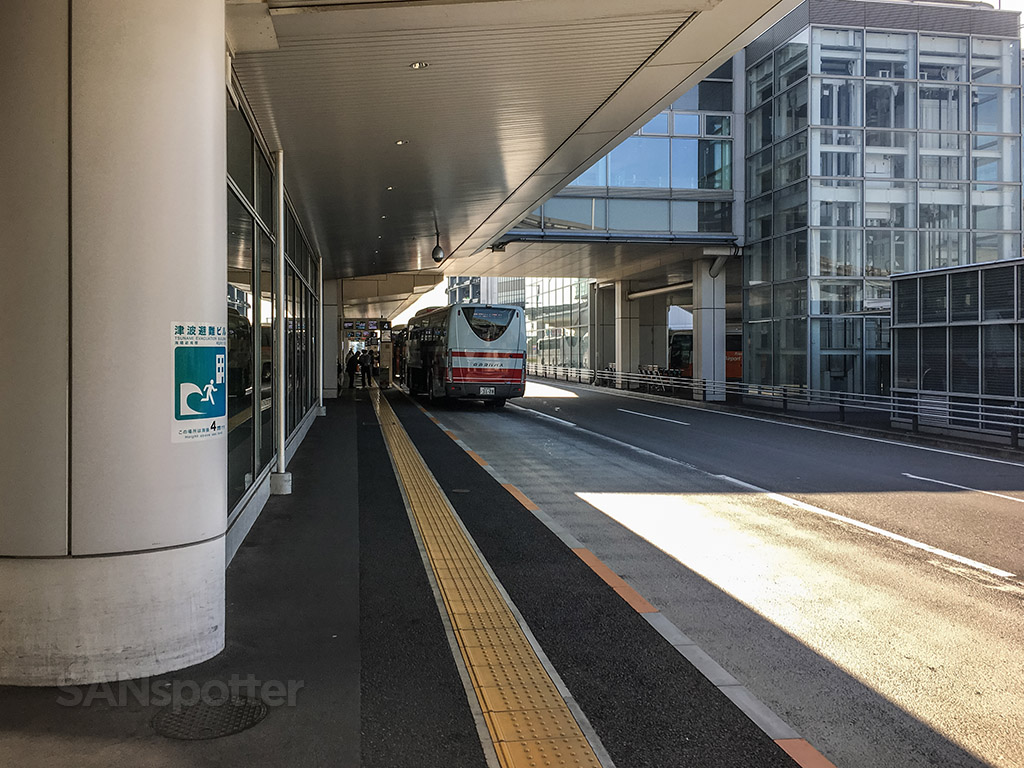 Waiting. Never mind that Tsunami sign on that pole…just focus on the bus and not the fact that you could be swept away in a giant wall of seawater at any moment.

I had well over five hours before my flight to San Diego would be departing Narita, so I wasn’t feeling any stress or anxiety at all as I boarded the bus and waited for it to fill up with other passengers. So even if traffic was going to be really bad this morning, it wouldn’t have bothered me any because I had plenty of time to kill and I was in no worry of missing my flight. 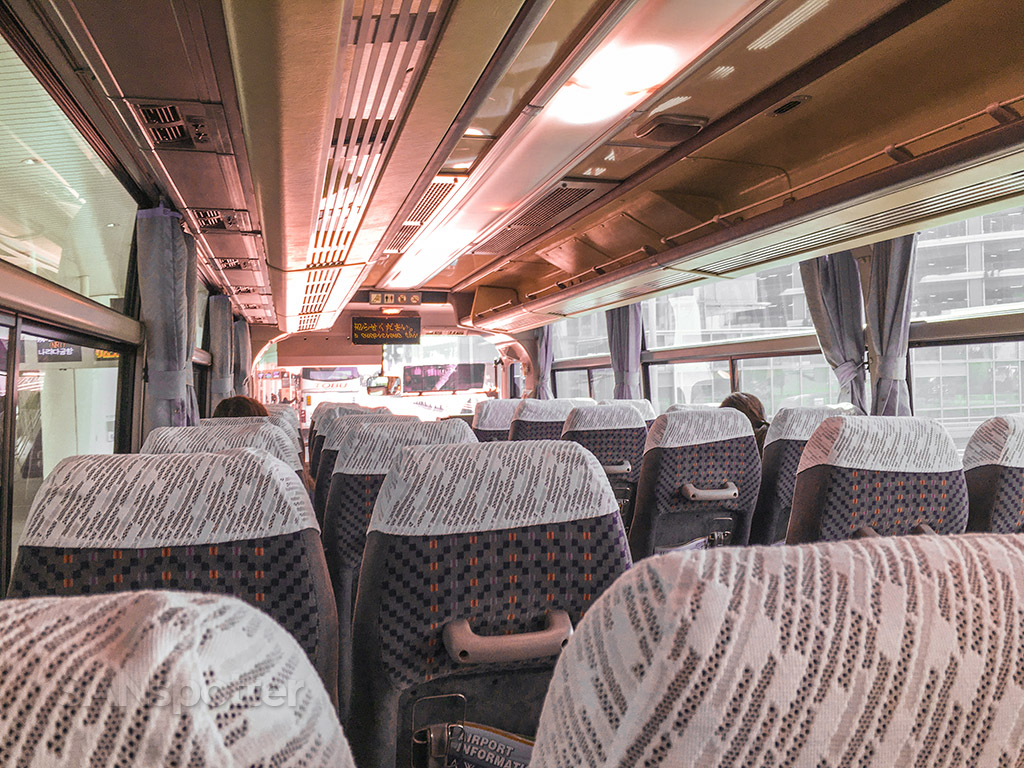 So what’s the protocol for bus reviews? Should I do the same things that I do for my airline reviews? This is all new to me… 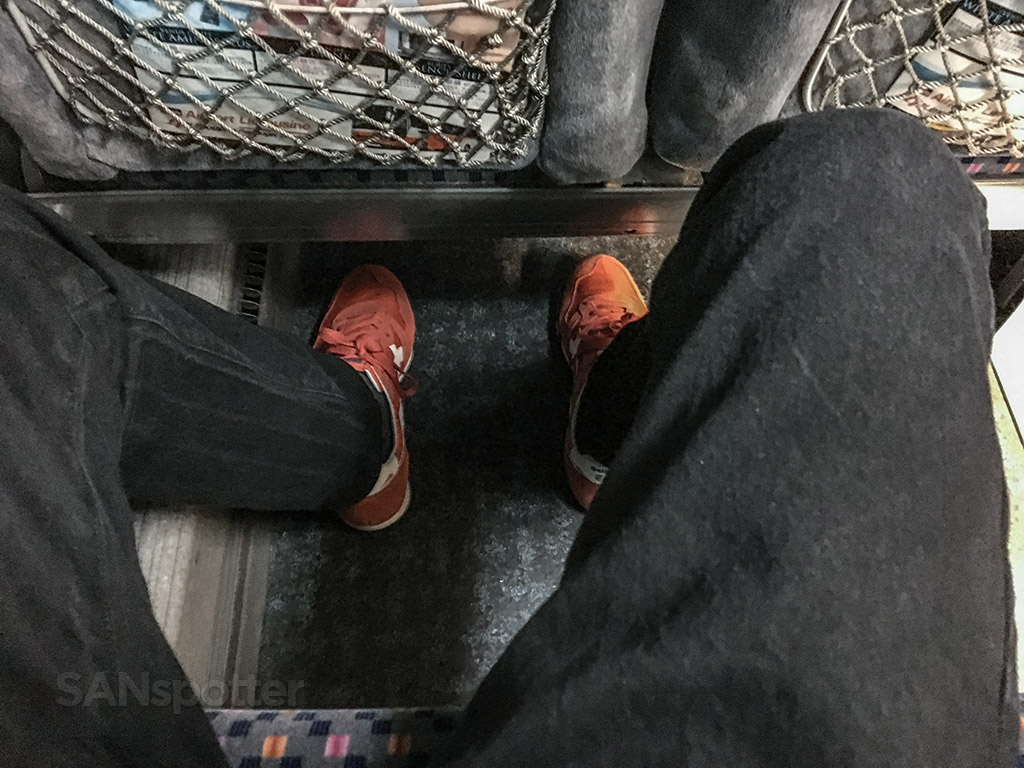 Perhaps I should have checked with some bus enthusiasts before writing this report. In any event, I assume that a pic of the legroom is considered mandatory – so here you go. 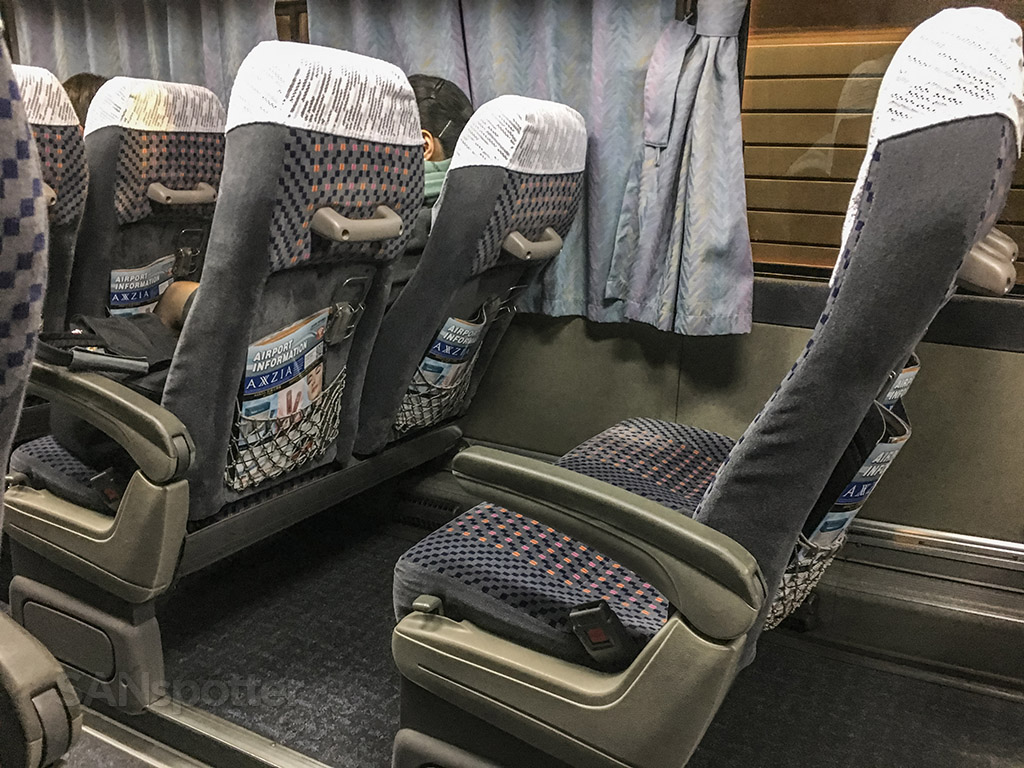 The interior of this bus was nothing fancy, but it was comfortable and I appreciated the fact that there were curtains on the windows to block out the sunlight if necessary. 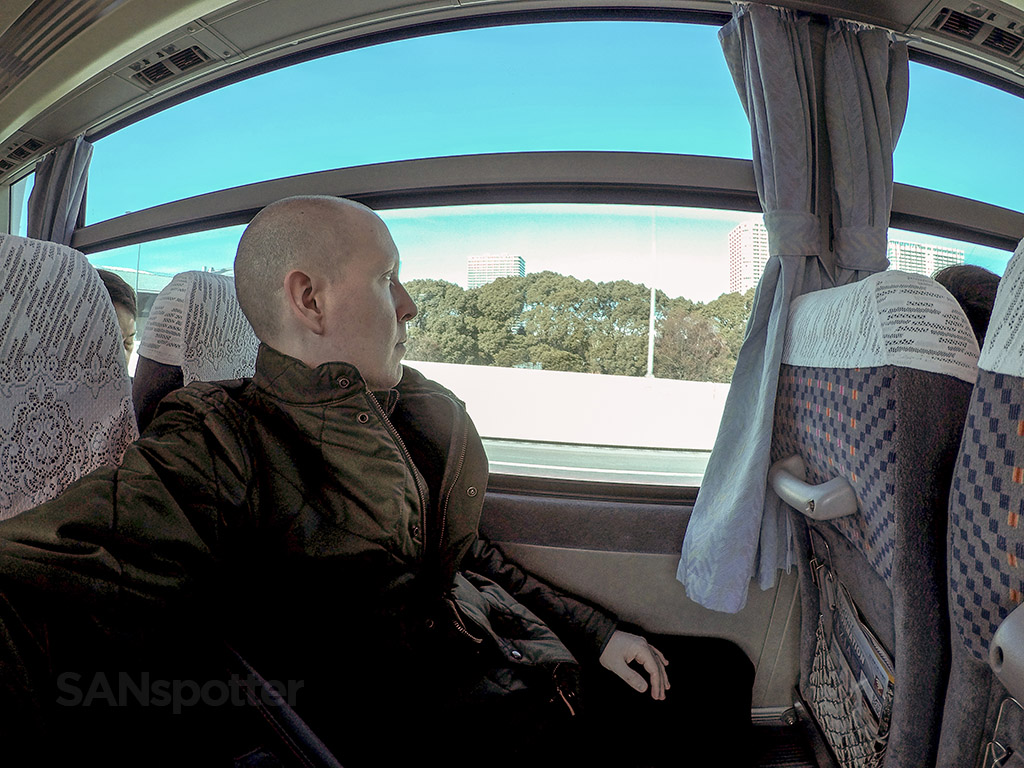 I left my curtains wide open of course. On a side note, my apologies for the weird color of these interior pics – the window tint was very odd (and strong), giving some of these pics a very “****ed up camera” vibe. 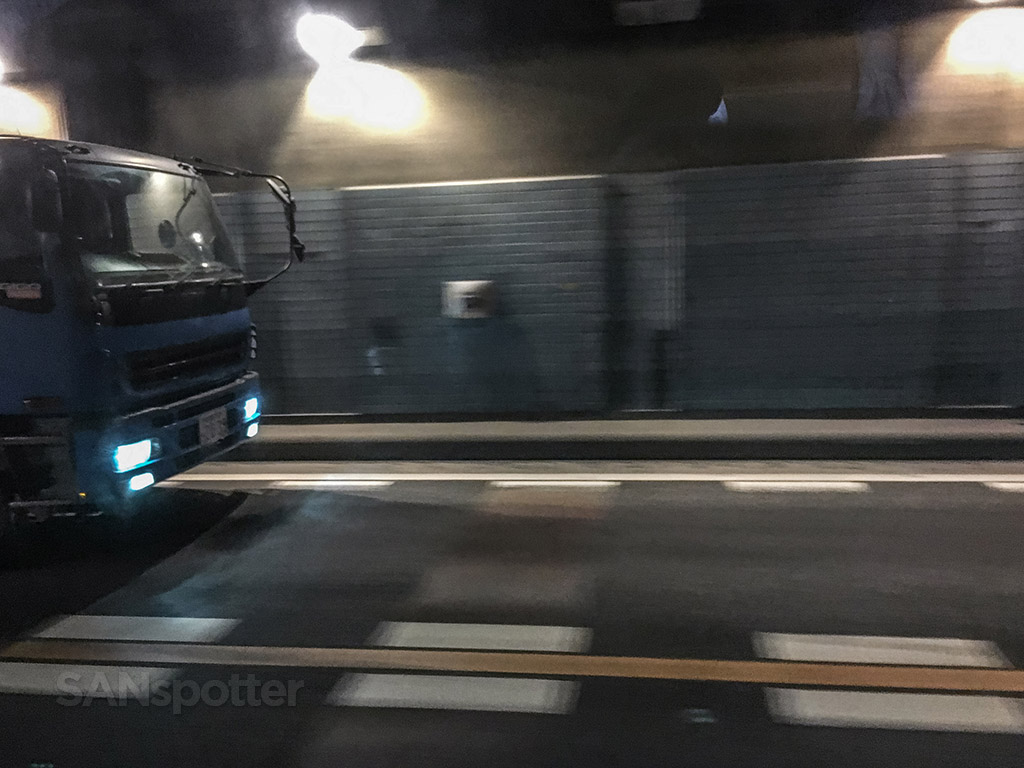 Apparently the colors and textures in that Tokyo Drift game are spot on.

The good news is that there were absolutely no delays on the way over to Narita, and all in all it ended up being a really nice relaxing ride. I’ve been to Japan many times over the years, but I’ve never once had the opportunity to explore Tokyo (as odd as that may sound). I felt just like a kid with my nose pressed the window watching the city roll by right in front of my eyes. 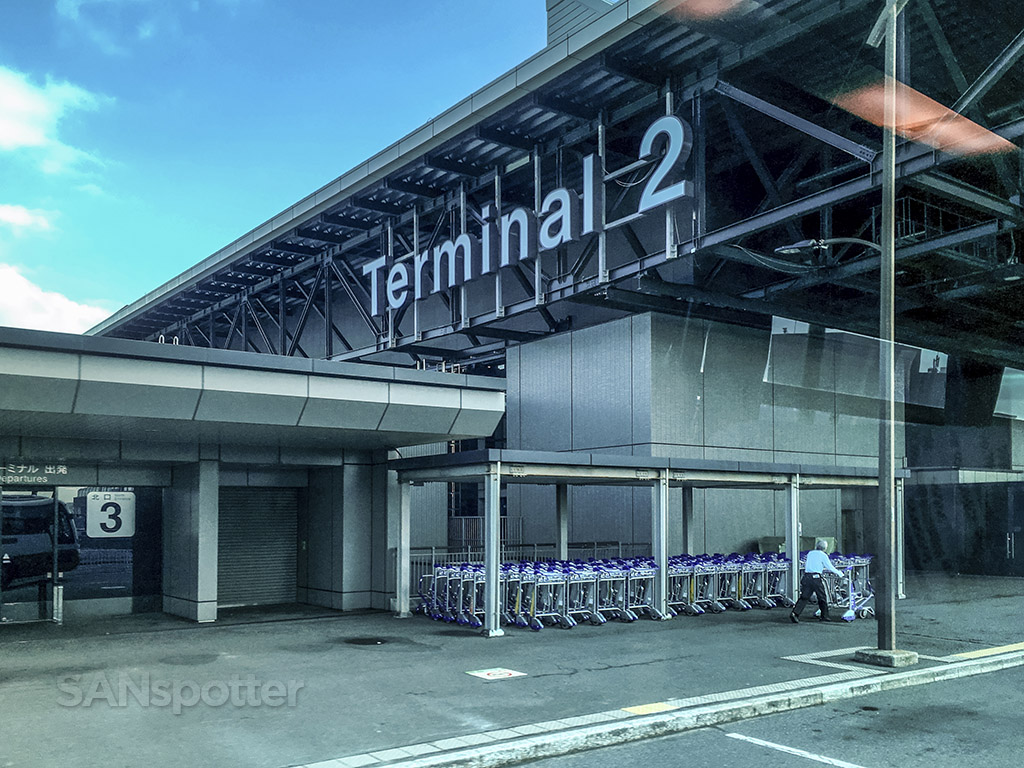 We made it! Arrival at NRT Terminal 2, and by this point I was starting to feel disappointed that it was too easy. 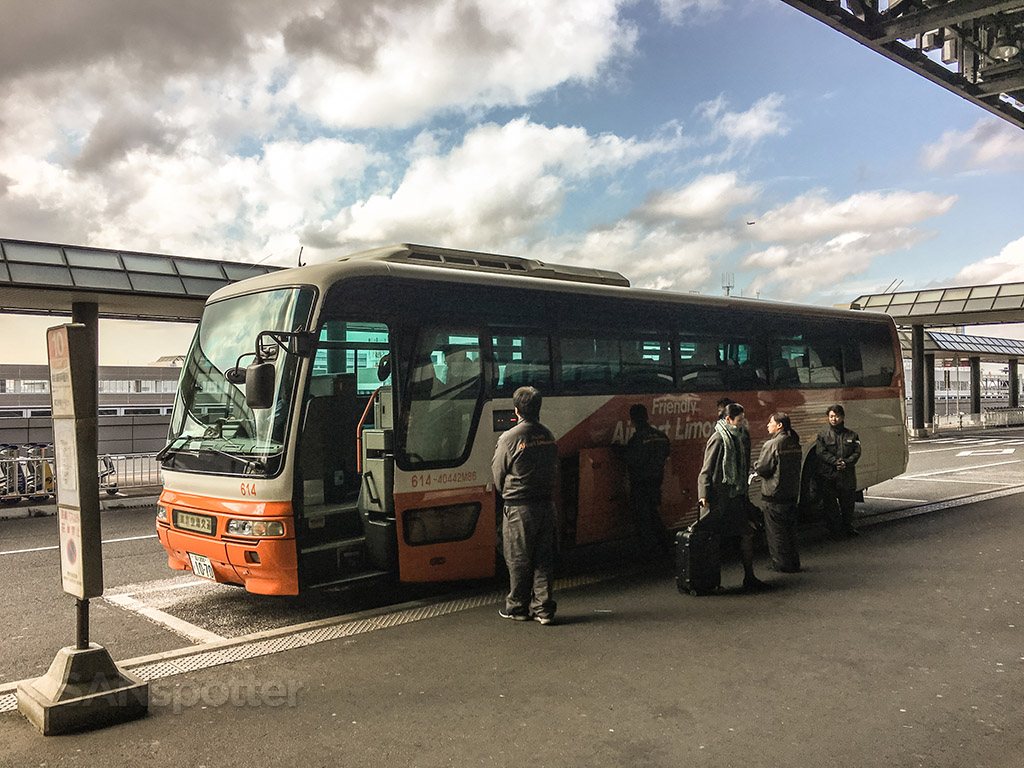 What good is a bus report without an actual pic of the bus? Here she is moments after our arrival at NRT – my apologies for not being able to tell you what make, model (and year) it is. I may be a total airline nerd, but I know absolutely nothing about bus spotting! 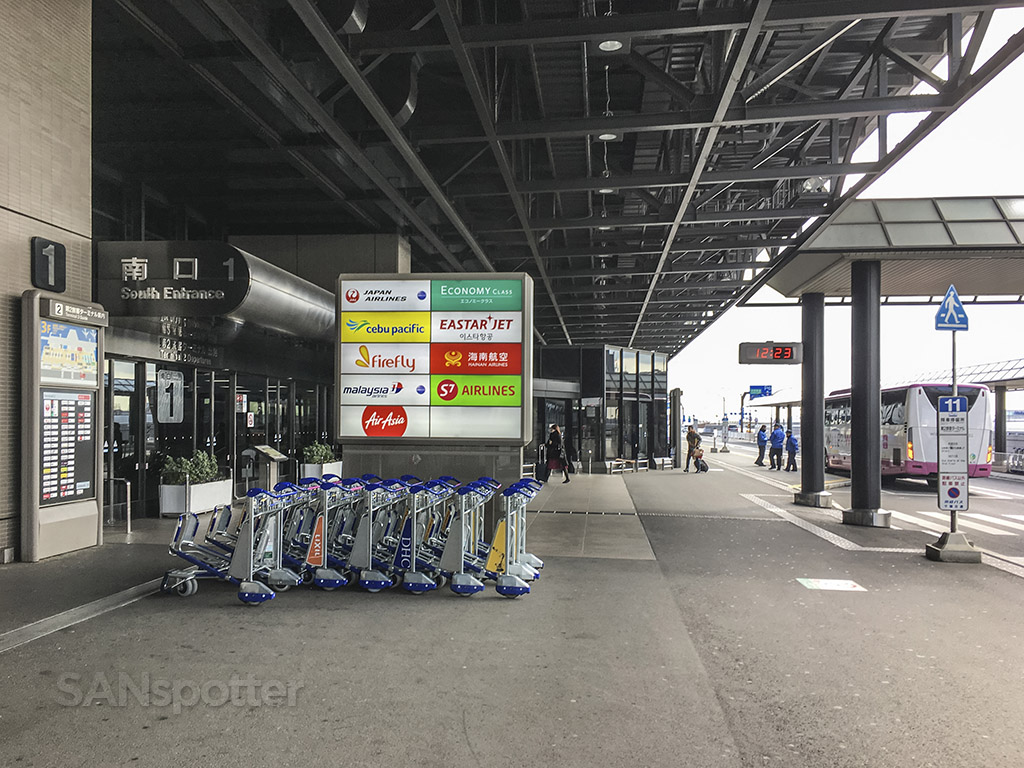 Where is everyone? Now that I was a HND-NRT transfer expert, I was feeling an overwhelming desire to help confused travelers find their way to HND. Sadly there was nobody to help…

Total travel time between Haneda and Narita today was one hour and 10 minutes, which left me gobs of time before my connecting flight home to San Diego. You know that means: lounge time!