The more time I spend at ICN, the more I’m convinced that Korean Air and Asiana are the same airline. Well, I’m probably exaggerating again, but the truth of the matter is that my experiences on these two different airlines have been nearly identical and it’s become increasingly difficult to tell the difference between the two. Both are stellar airlines with amazing staff on the ground in the air, and I’ve walked away from each of my Korean Air and Asiana experiences feeling like a spoiled king (a feeling I quite like) – they are definitely setting the standard for what large international airlines should be.

Unfortunately, the lines between the two becoming so increasingly blurry that it’s hard for me to choose one over the other. A perfect example of how similar these airlines are is their business class lounge experiences at Incheon airport in Seoul. If somebody would’ve told me that both lounges were designed by the same person and catered by the same staff, it wouldn’t surprise me a bit. They are the same darn thing!

Before starting with the pics, it’s important to know that this lounge is part of the Priority Pass network. That means that if you’re a Priority Pass member, you’ll have complimentary access to this lounge even if you aren’t flying Asiana. 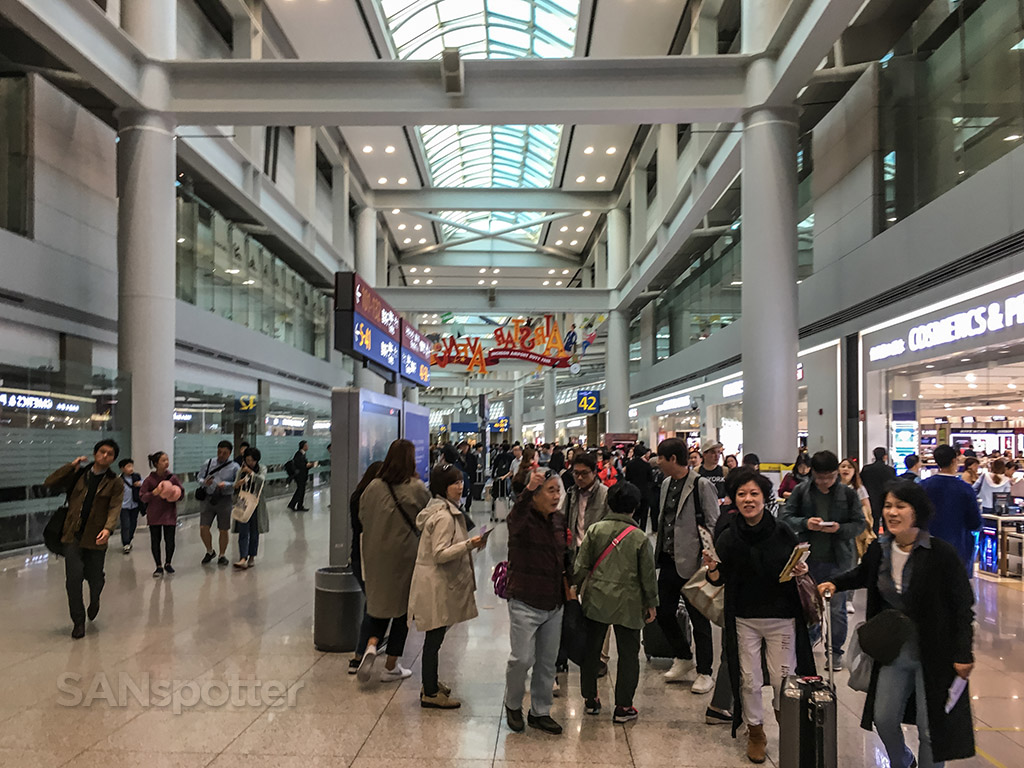 Looking for some relief from busy airport terminals such as this? Luckily, there is a lounge (or two) for that.

Back in January of this year, I made my first visit to the Korean Air Prestige Class lounge here in the heart of this massive airport. It was really nice – big, bright, and well-stocked with gobs of tasty snacks. The entire space was broken up into two separate rooms with the entry lobby separating them right down the middle. It was a good experience, and my time there was comfortable and relaxing. If anything, it made me all the more curious to find out what the Asiana lounge experience was like. 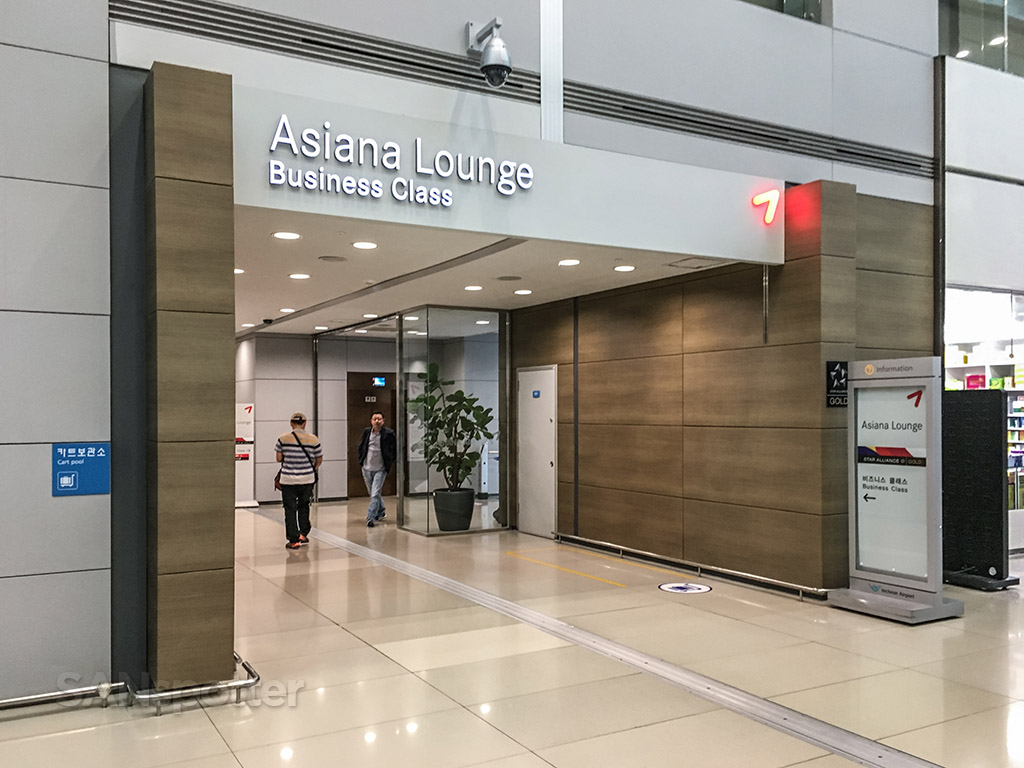 This is the main entrance to the Asiana business class lounge. My fingers were crossed that the place would be oozing with that awesome Asiana hospitality. 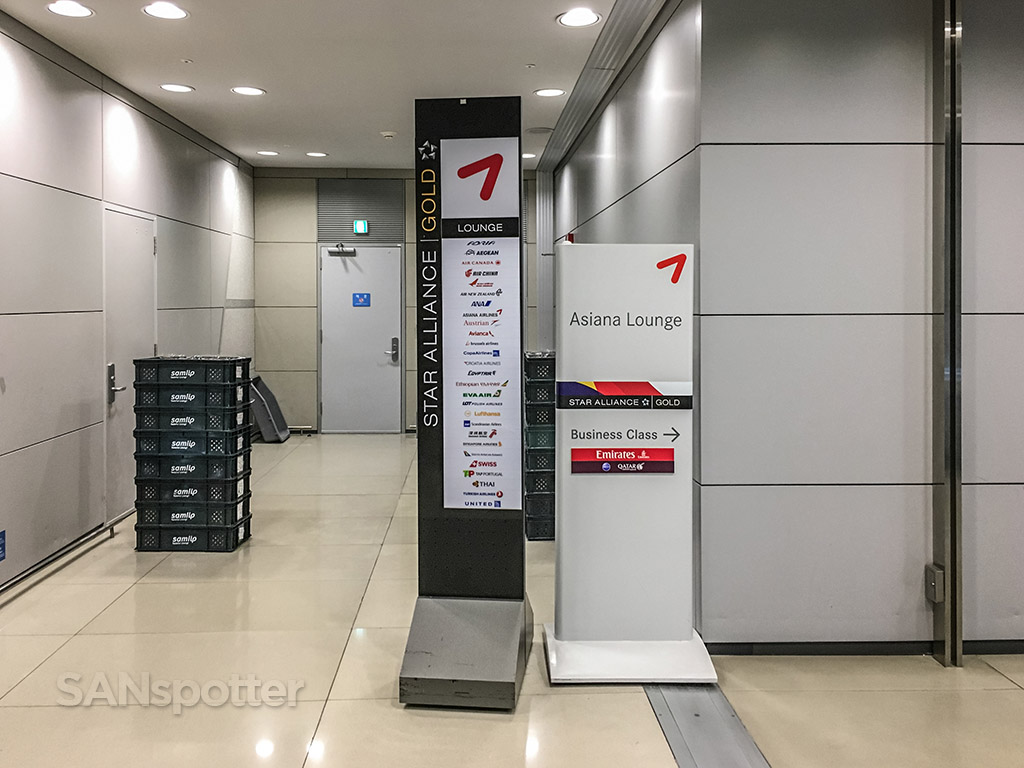 Unfortunately I didn’t see any of that amazing hospitality leaking down here on the main level. Perhaps I was going to have to go upstairs for that… 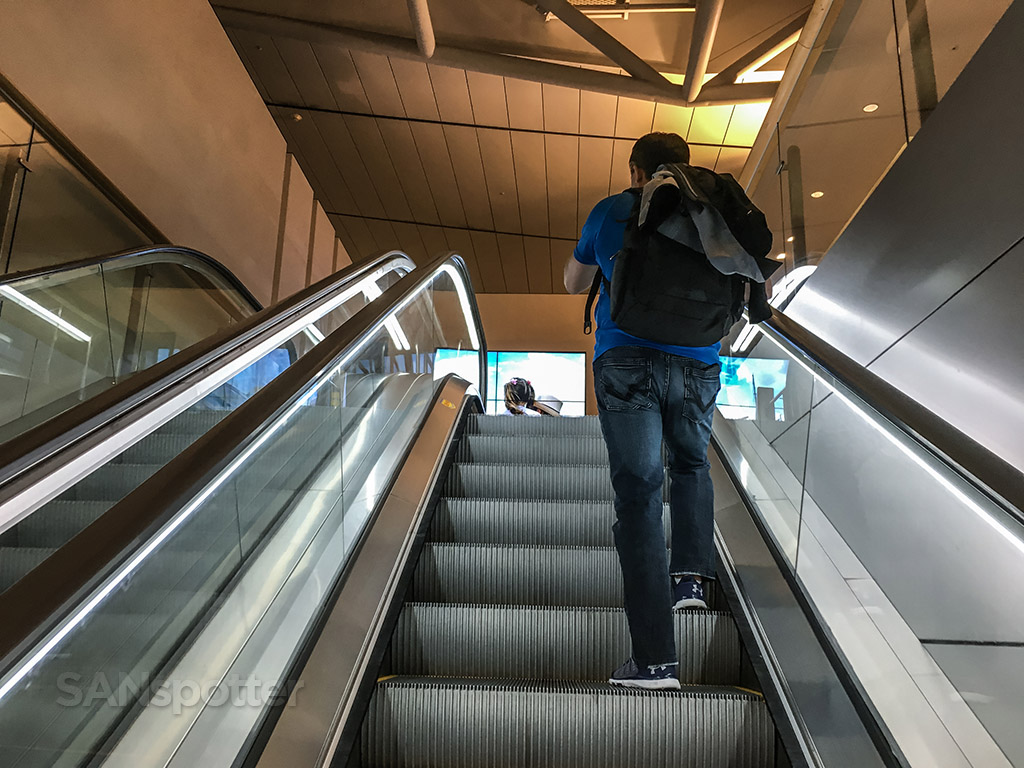 Does anybody else get really excited in the moment before entering a new lounge, or is it just me? 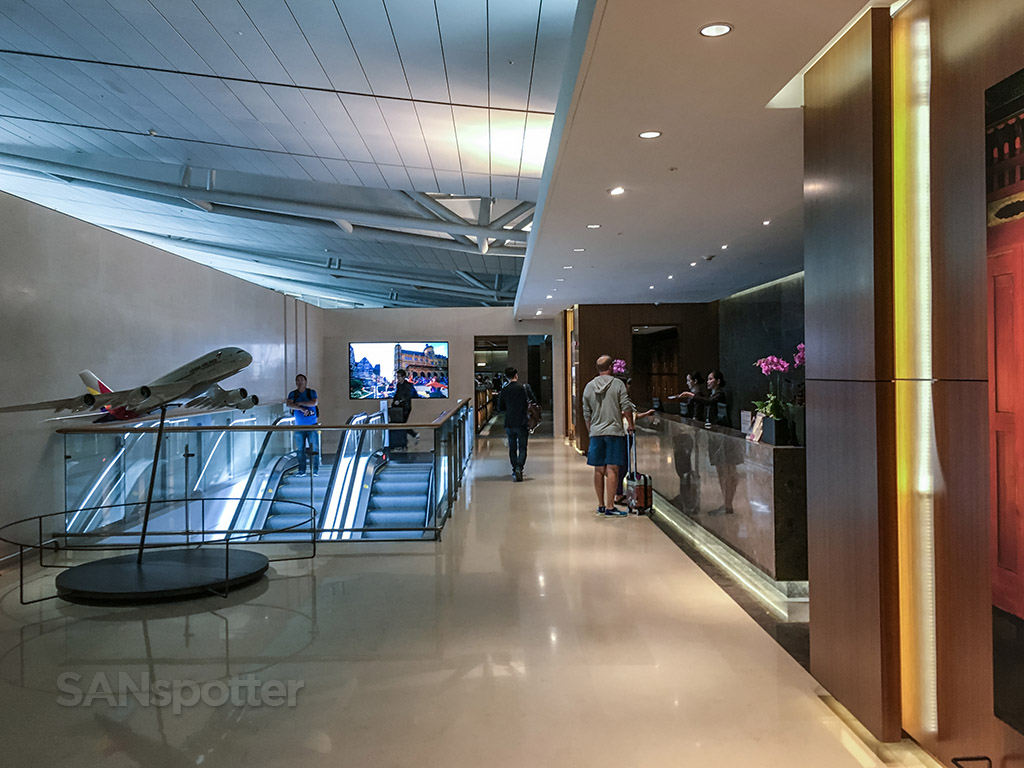 Hmmm… this main lobby looks very similar to another lounge I’ve been to here at ICN recently. 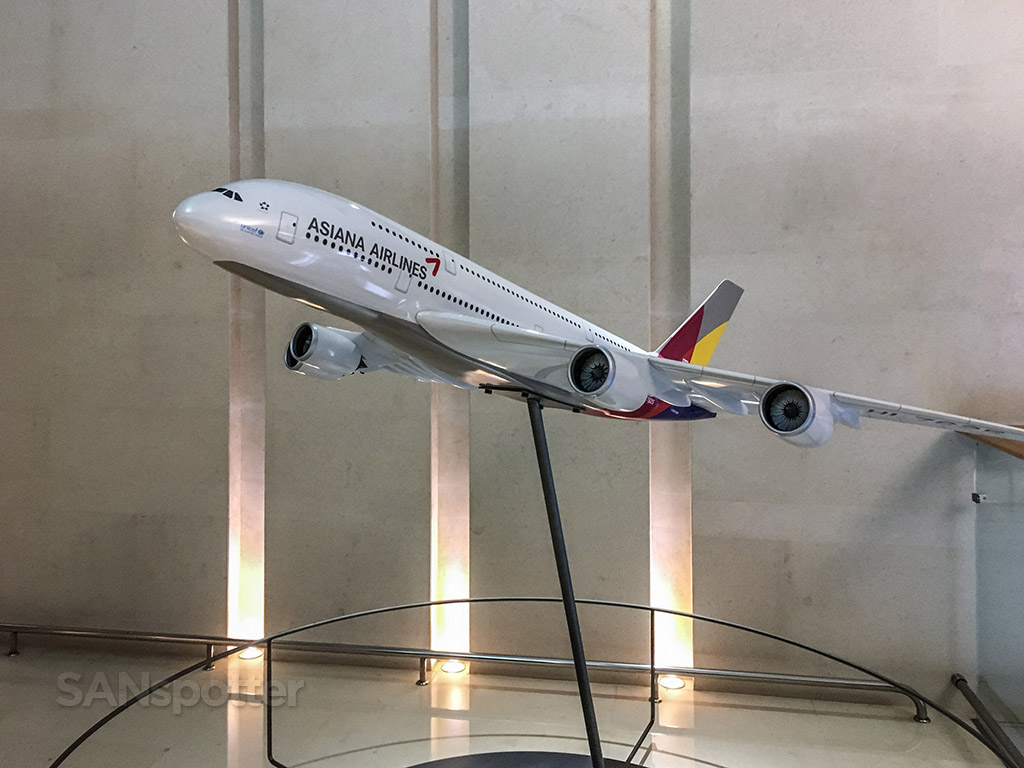 There’s even the same scale model of an Airbus A380 in the lobby, though this one is wearing a different livery.

Much to my surprise, The Asiana business class lounge here at ICN is a carbon copy of the KAL lounge – right down to the floor plan. The walls, windows, and square footage is exactly the same – as is the view outside to the terminal. The only physical difference between the two is the interior decor, which to be quite honest, isn’t really all that different. There is a wide variety of seating in both lounges, ranging from that familiar row of tables which faces the outside window, to clusters of chairs arranged in different configurations all throughout. 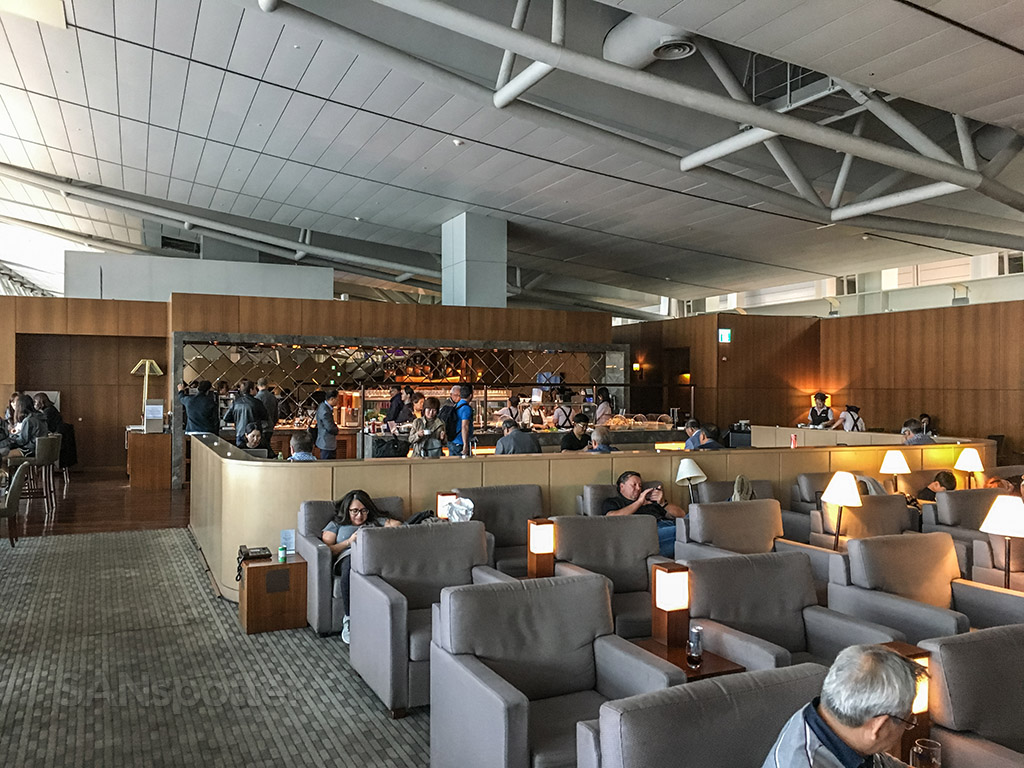 Interior of the Asiana business class lounge here at ICN and, like, whoa… I’m having flashbacks here. 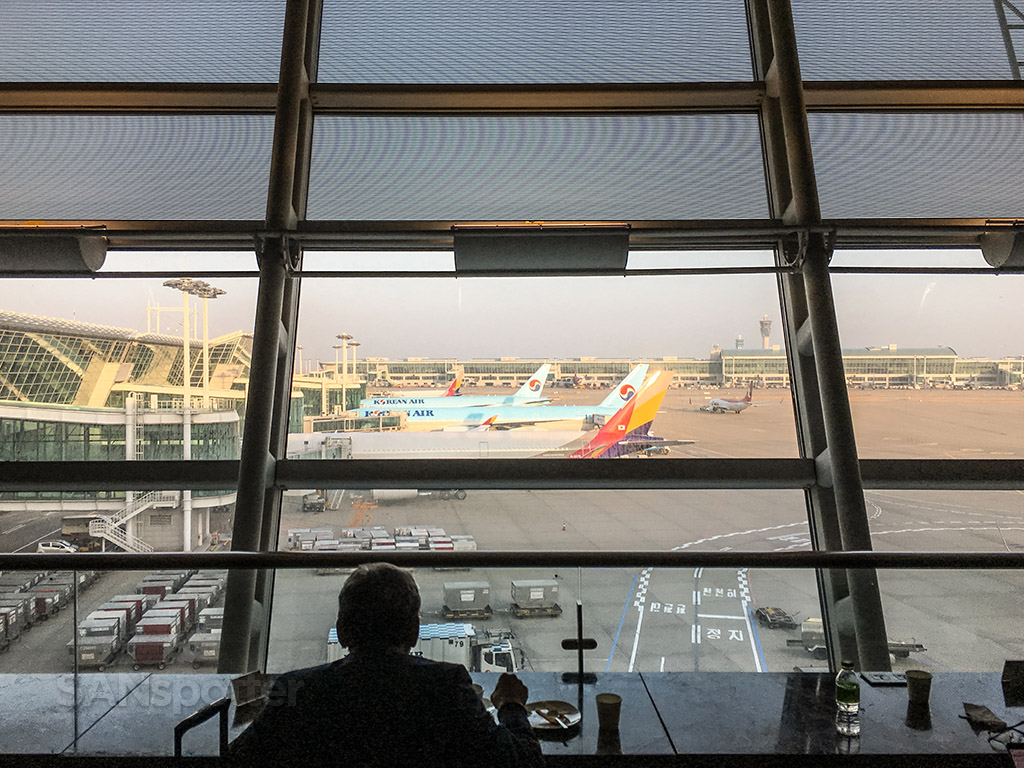 I’m feeling like I’ve been here before. Which is OK I guess, since the views are always nice here at ICN. 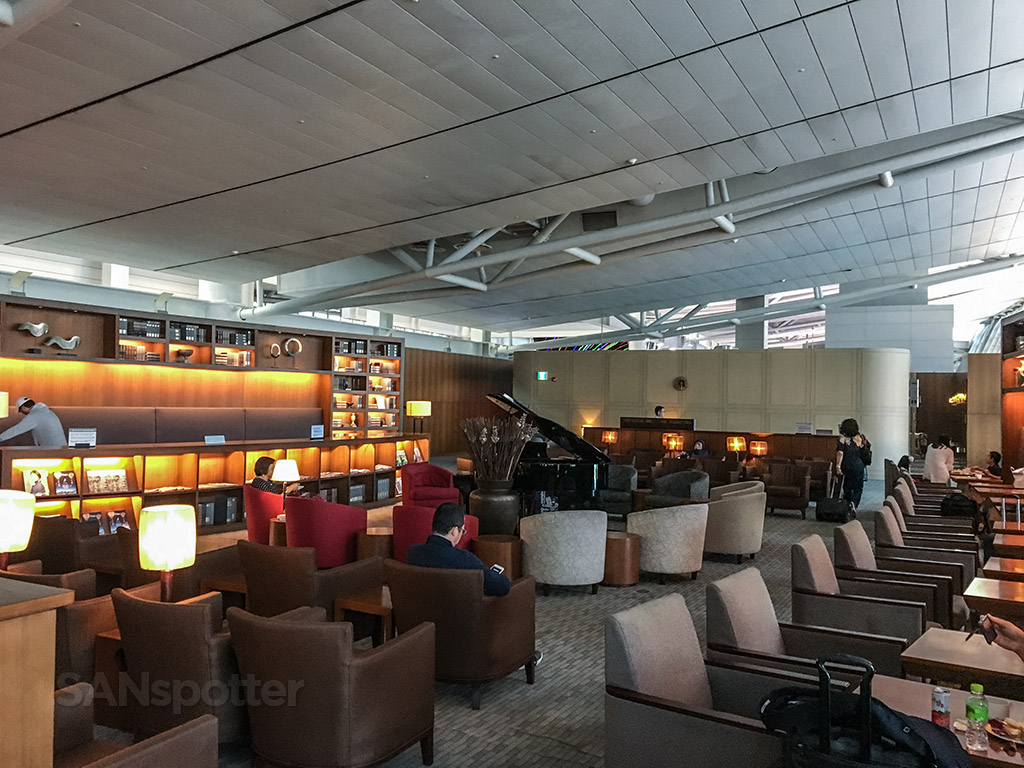 There is no shortage of seating in this lounge, that’s for darn sure. 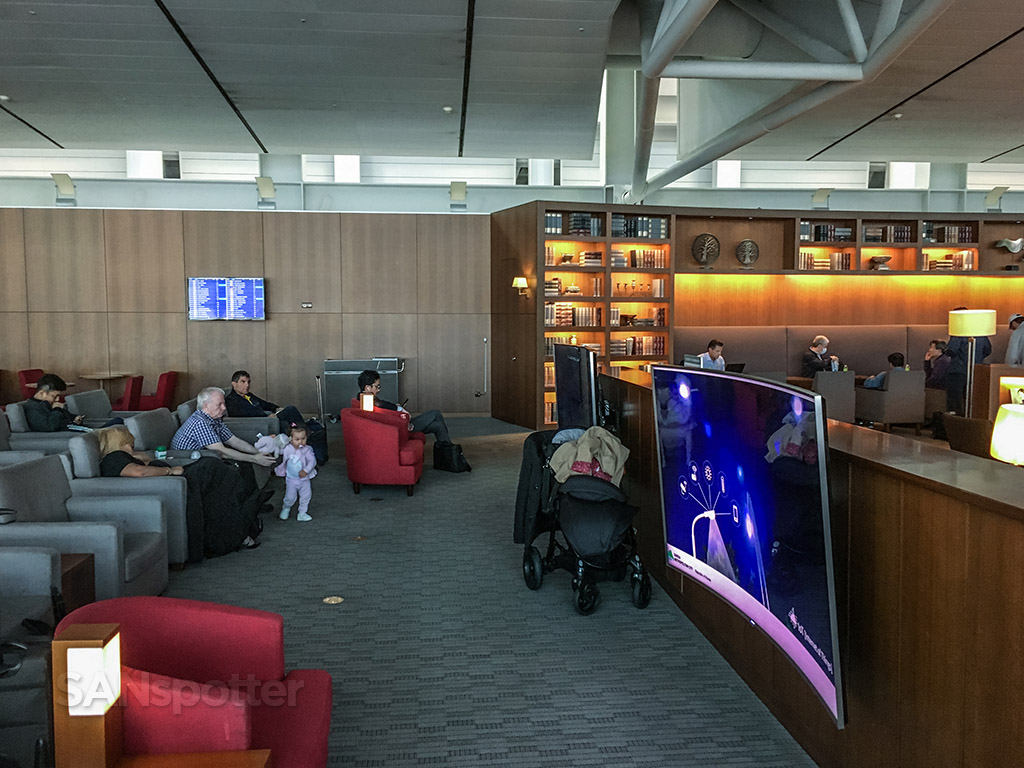 You know you’re in Korea when there are huge Samsung and LG curved TVs hanging on every available surface. 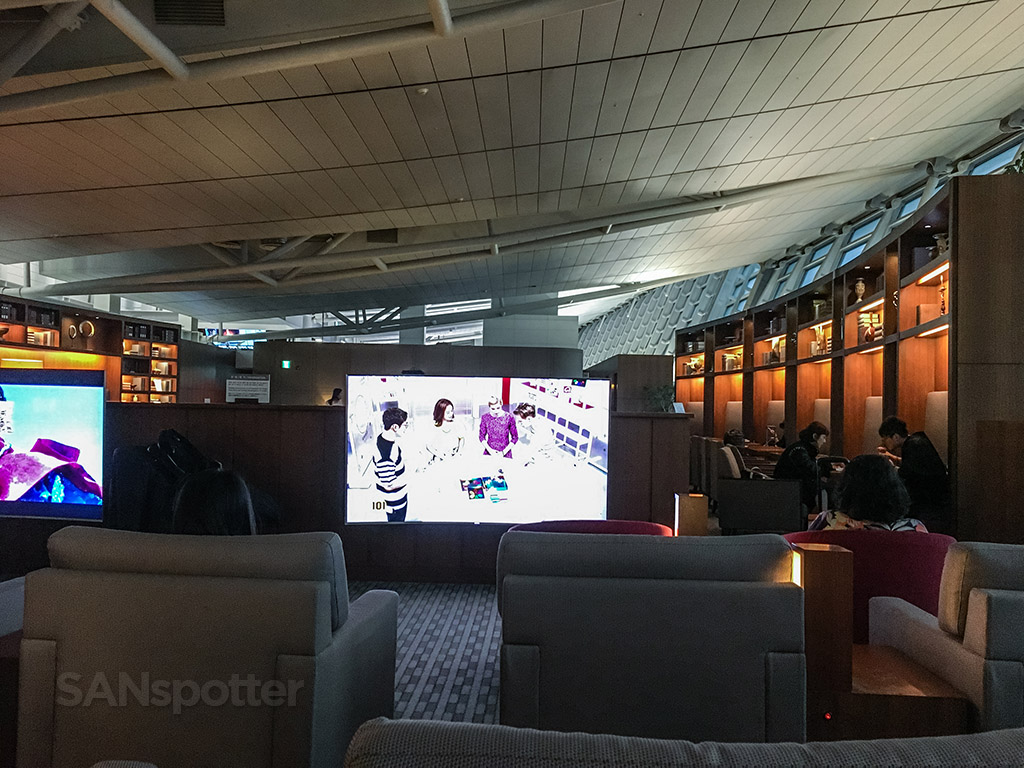 You better hope what is on TV is good, because it’s pretty hard to get away from these theater-like screens. 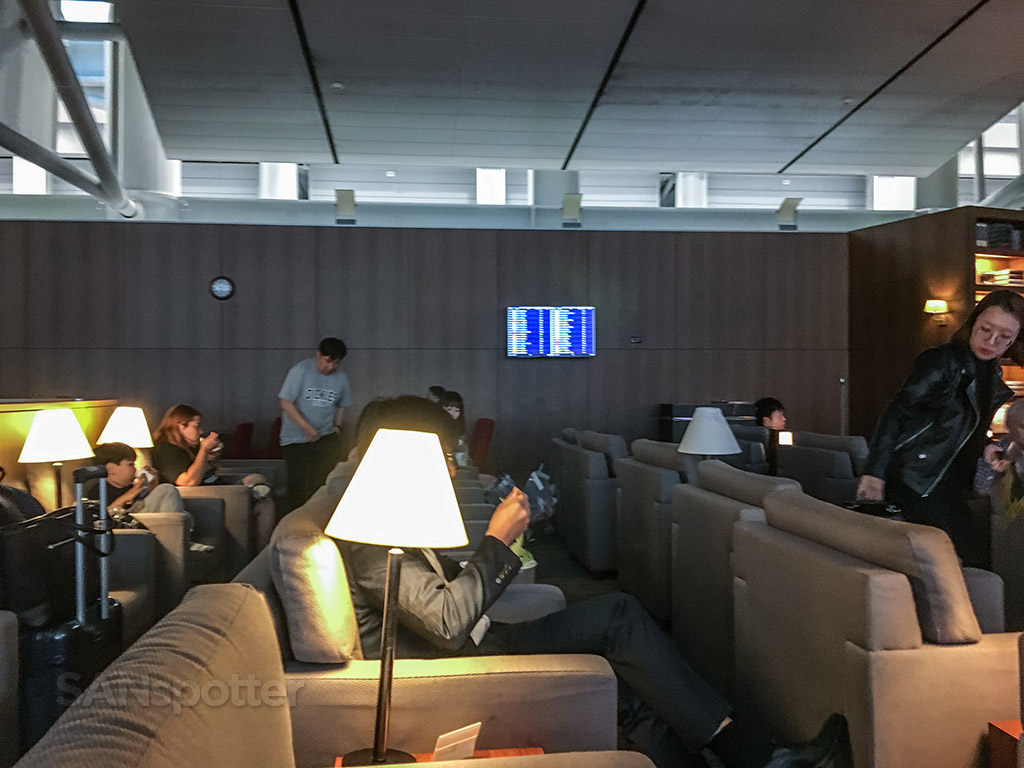 I thought it was pretty funny that the flight information display was this tiny little screen that was impossible read without getting right up to it. I’m sure that Samsung or LG would be very happy to solve that problem… 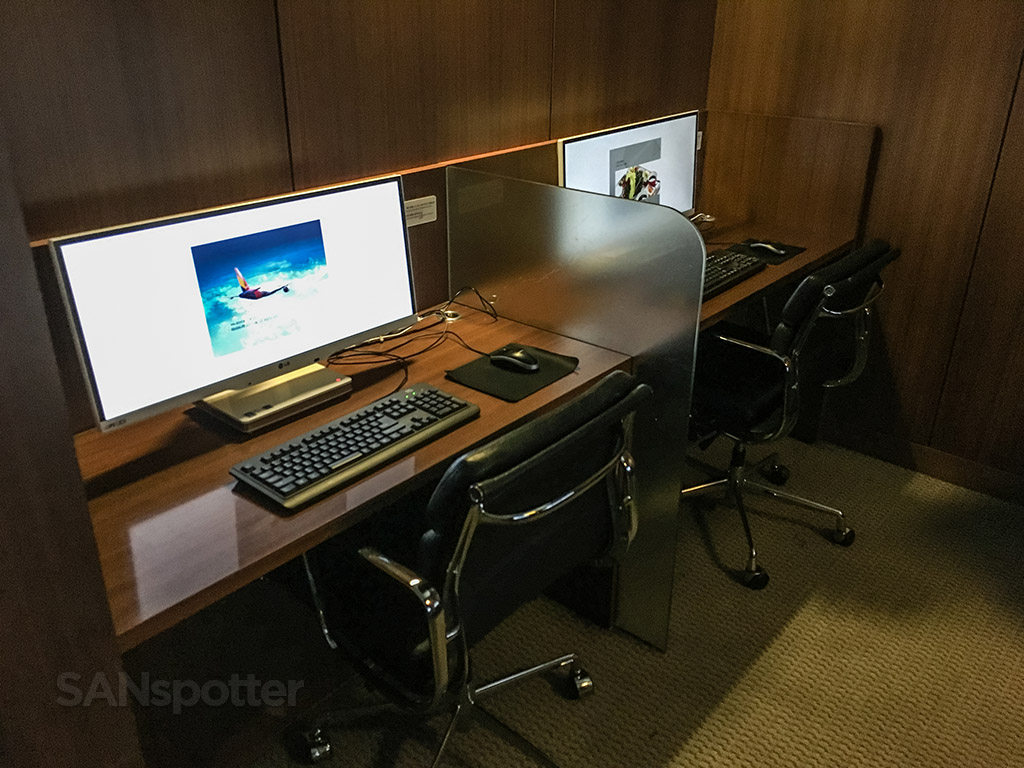 While I’m on the subject of technology, this is a picture of the business center – which, to be honest, looked like an awesome place to get some sleep due to how dark and quiet it was.

Another minor difference between the two lounges was the food. I’m not sure if it was just the time of day or what, but there seemed to be more food options in the Korean Air lounge when I was there earlier this year. Here in the Asiana lounge, it was slim pickings and the only thing that I could find to eat at 7:30 AM were a few stale sandwiches and a small cup of yogurt. 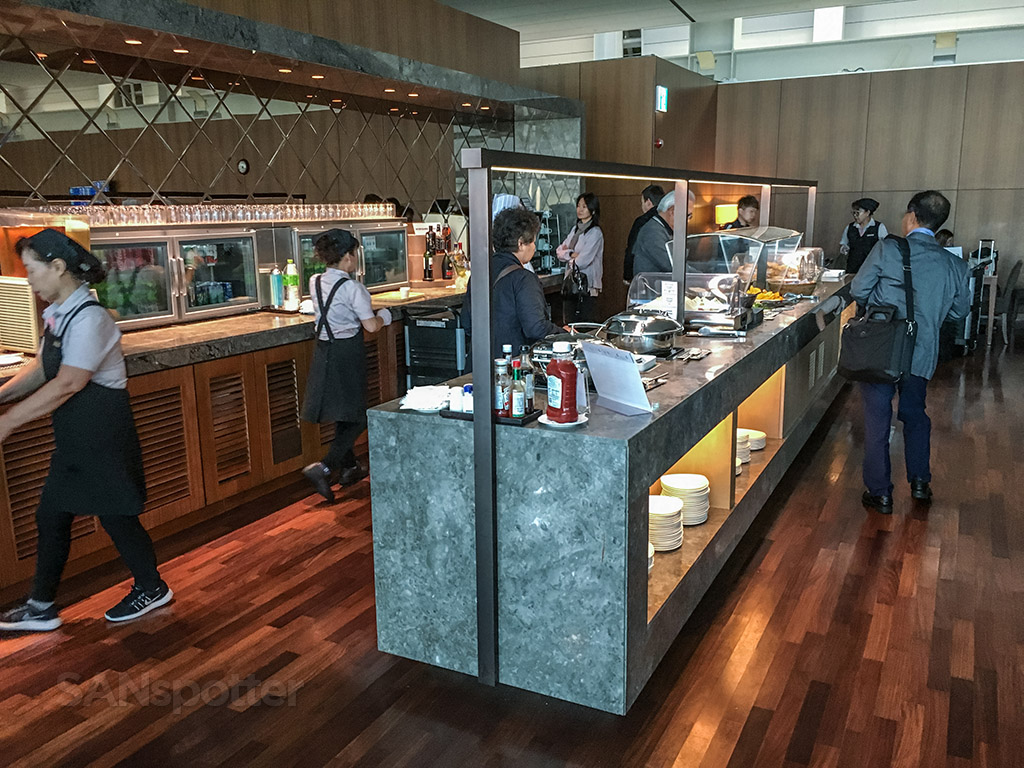 This is where the magic happens. This self serve food bar is a bit smaller than what is in the Korean Air lounge, but still nice and organized. 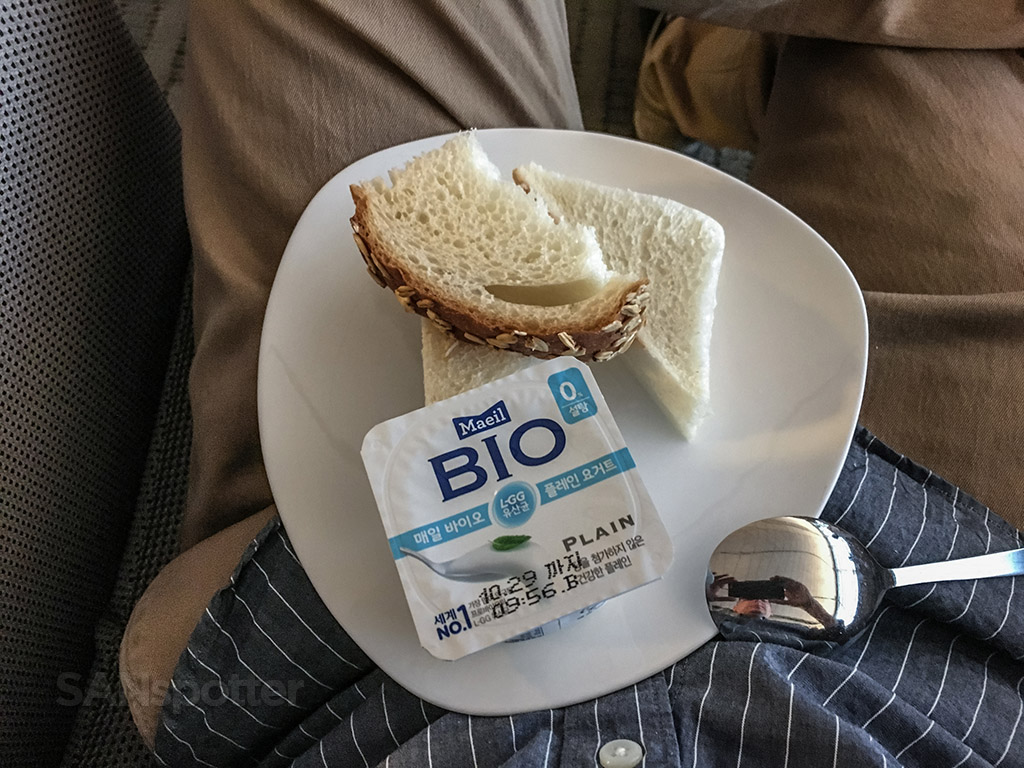 This was all I was able to rustle up shortly after I arrived. Not so bad for a light breakfast. Bonus points to you if you can spot the nerdy travel blogger taking a pic of his food… 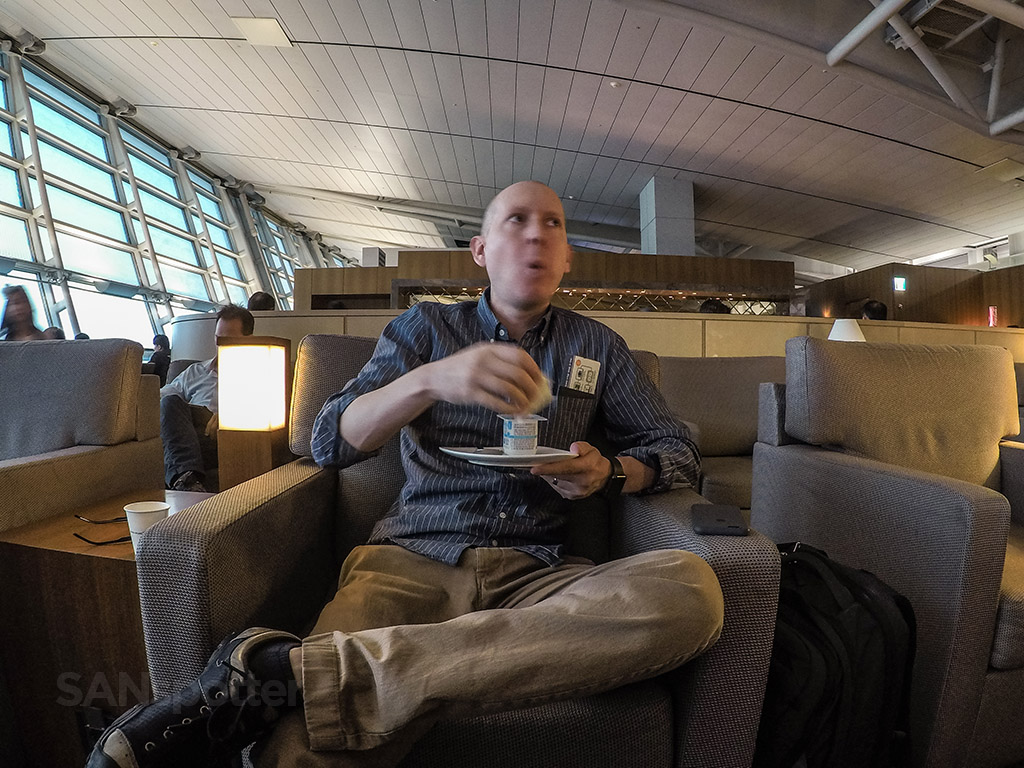 It wasn’t quite as good as something that the Camden Food Company could whip up (*wink* *wink*), but it was still decently tasty. 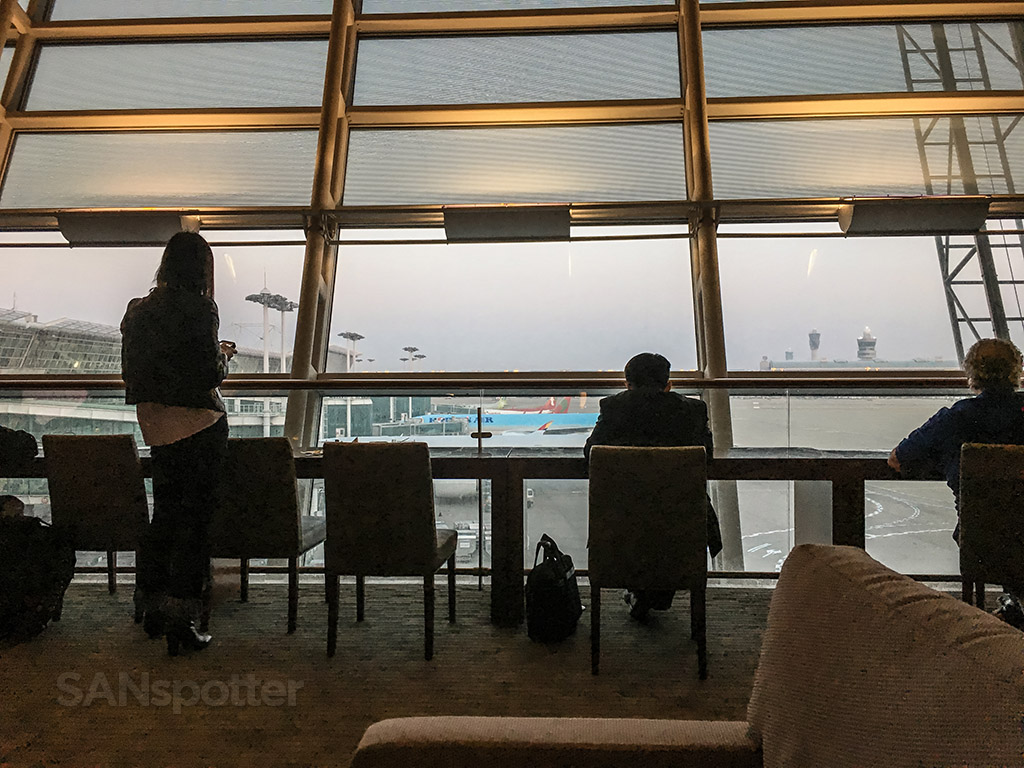 Thankfully the windows are large enough in this lounge that I still had a pretty decent view to the outside – even from where I was sitting inside by that large TV.

Thankfully, by 8 AM, they brought out a steaming hot pot of rice porridge which was a bit more substantial (and a lot more tasty). I had to act fast though, because it seemed like everyone else in the lounge was as hungry as I was, and it was a battle to get in there and get my share. For a moment there it kind of felt like I was a lion feasting on fresh kill in the Sahara… 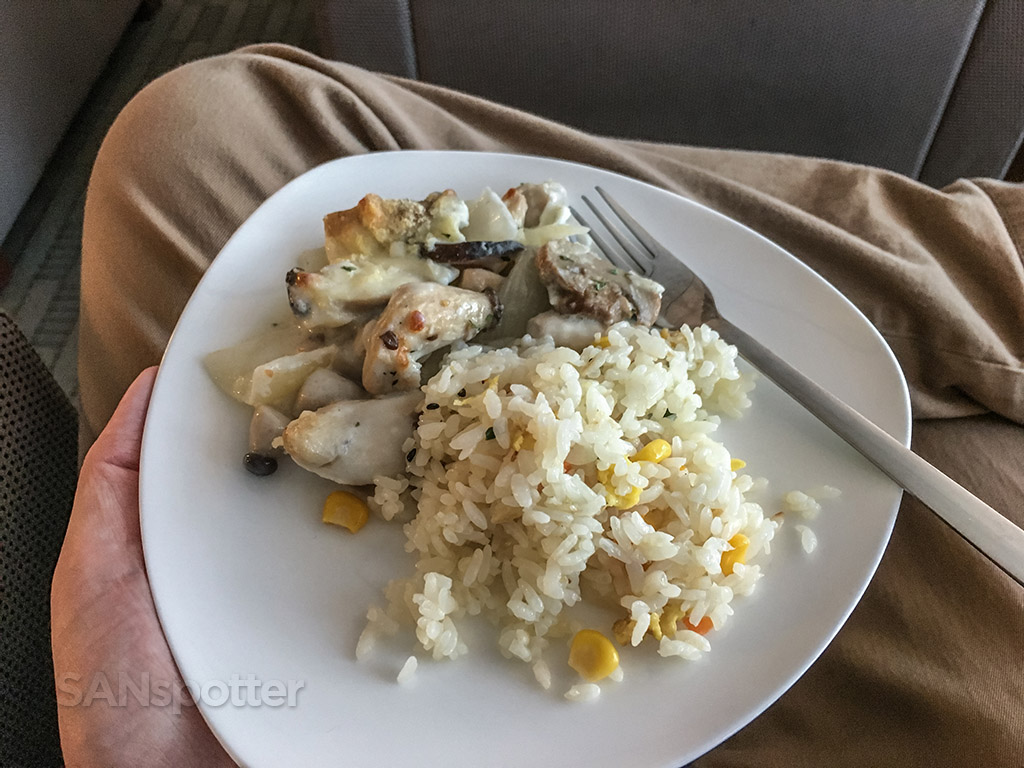 OK, this is more like it! I could’ve eaten a whole heck of a lot more of whatever this stuff was, but I needed to save room for what was sure to be a decent meal on the plane.

I get asked all the time about which Korean airline I prefer, and it’s always been difficult for me to answer because of the carbon copy similarities between KL and OZ. This Asiana business class lounge experience didn’t help me to separate the two in my mind – and as a matter fact, it only confuses me even more. As far as I’m concerned, the ground experience both Korean Air and Asiana are exactly the same. I enjoyed both of their business class lounges equally, and I’m not just saying that to be nice. It just happens to be the only conclusion I can come up with based on how identical the two are, so you can’t go wrong choosing one over the other.

Don’t forget to sign up for Priority Pass to get complimentary access to this lounge whenever you fly through ICN!