Kicking things off with this low budget / low cost Mexican airline adventure is a flight on Interjet – an airline that isn’t officially classified as low cost. I really know how to stick to a plan, don’t I? In my defense, I actually started planning this trip with the sole intention of trying Interjet and getting a ride on one of their cool little SSJ 100s (an aircraft which is quite rare here in the US), but it didn’t quite happen that way.

Seat map of this Interjet A321 (courtesy of seatlink.com) showing my seat (24A) for this flight to Mexico City. 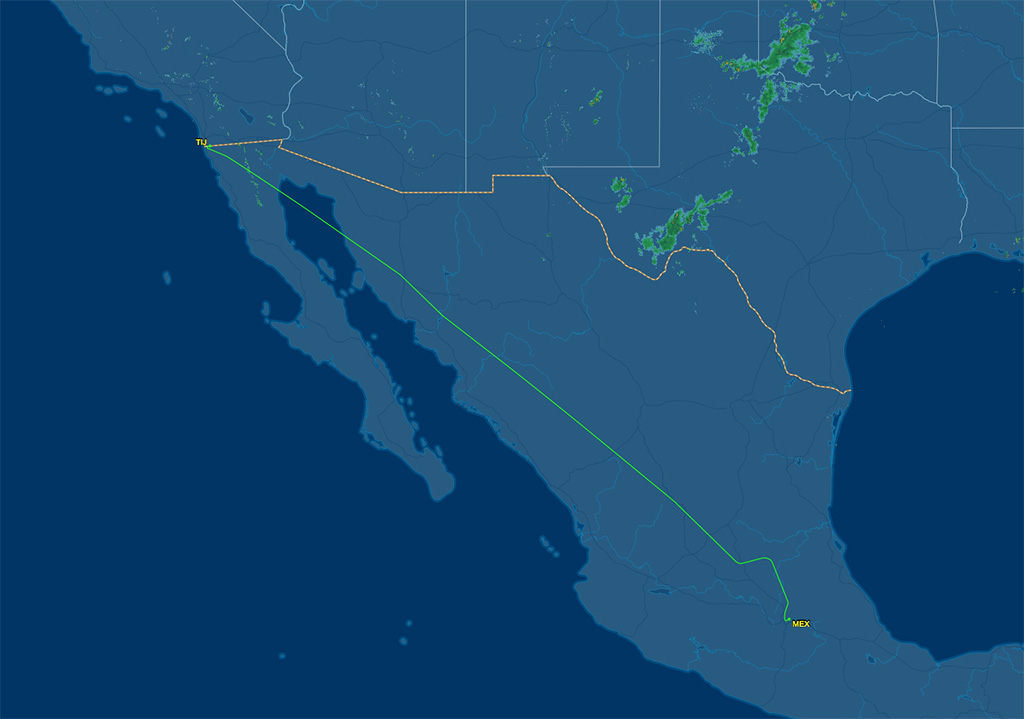 Our route from Tijuana to Mexico City this morning.

Lucky for us San Diegians, we have very easy access to the Tijuana International Airport via the Cross Border Xpress. It essentially an extension of the Tijuana airport which extends over the Mexico US border and allows easy crossing (usually 5 minutes or less) for passengers flying in and out of Tijuana. I had my first chance to try it last year, and it was such a good experience that I promised myself I would do it again for any trip to Mexico or points south. And guess what? Here I am, back at the CBX for this trip to Cancun. 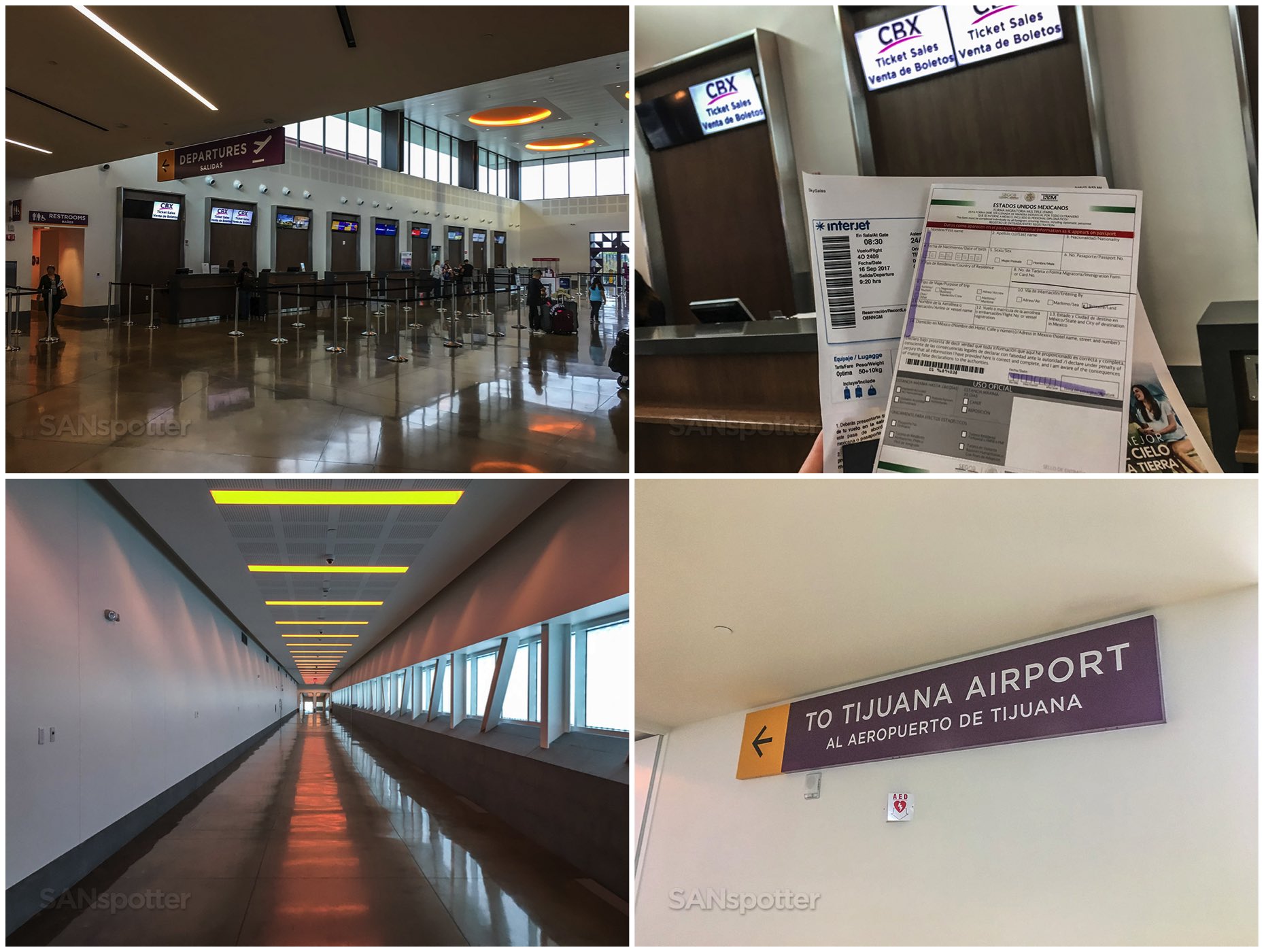 One of the best kept travel secrets in all of San Diego: the Cross Border Xpress (CBX). It’s good to be back, and I’m very glad to see that nothing has changed since the last time I was here!

Thankfully, the process of crossing the border and passing through security into the Tijuana airport was exactly the way that I remembered it from last time. Absolutely nothing was different, except for the fact that the downstairs area where I hung out while waiting for my AeroMexico flight to Mexico City has now been closed off and I had to wait upstairs with the masses. TIJ isn’t a very large airport at all, so the chance of finding a quiet spot to sit and wait is slim. Unless you have lounge access that is, which unfortunately, I did not today. 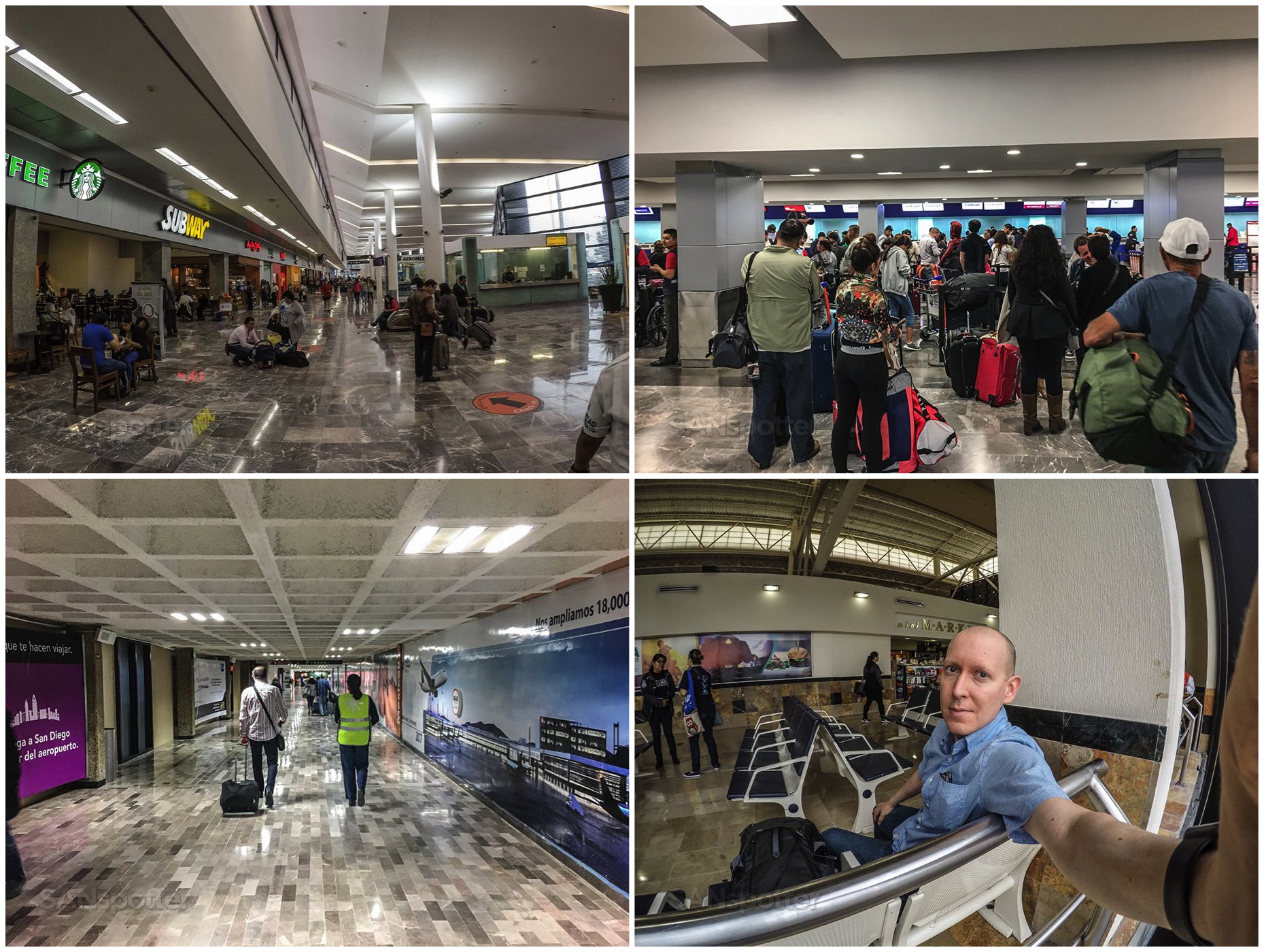 My apologies if you were expecting a dumpy little airport which reeked of livestock, but I’m happy to inform you that TIJ is really nice! All it needs is a good place to get authentic tacos, and it would be world-class in my book. How can there not be a good taco joint in this place? 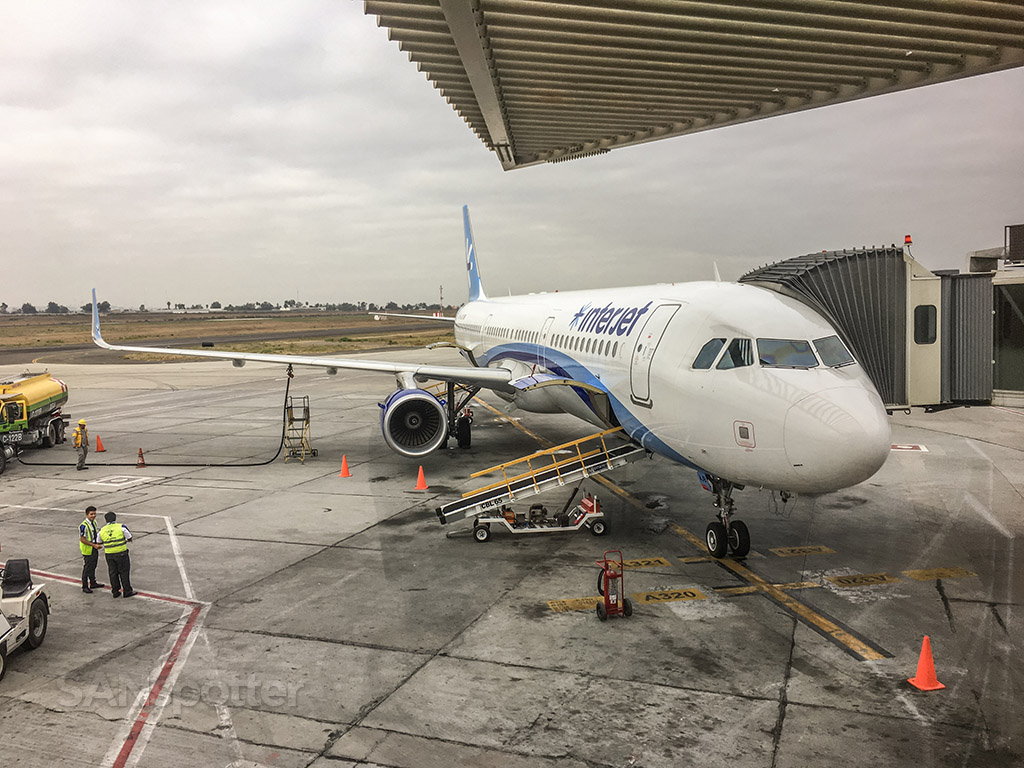 The subject of this trip report. XA-AJB looking sharp as she gets prepped for the run to Mexico City.

I was thrilled to see that they started boarding process right on time (it was getting crowded and noisy in the terminal), which was especially releving due to the fact that today was the Mexican Independence Day, and there were celebrations going on at the Mexico City airport which closed it down entirely for several hours. I learned about this the night before, and was sure that my itinerary would be blown to bits and I was going to miss some flights because of it. But thankfully, I didn’t have to worry about that – we were on our way to Mexico City right on schedule like it was any other normal day. 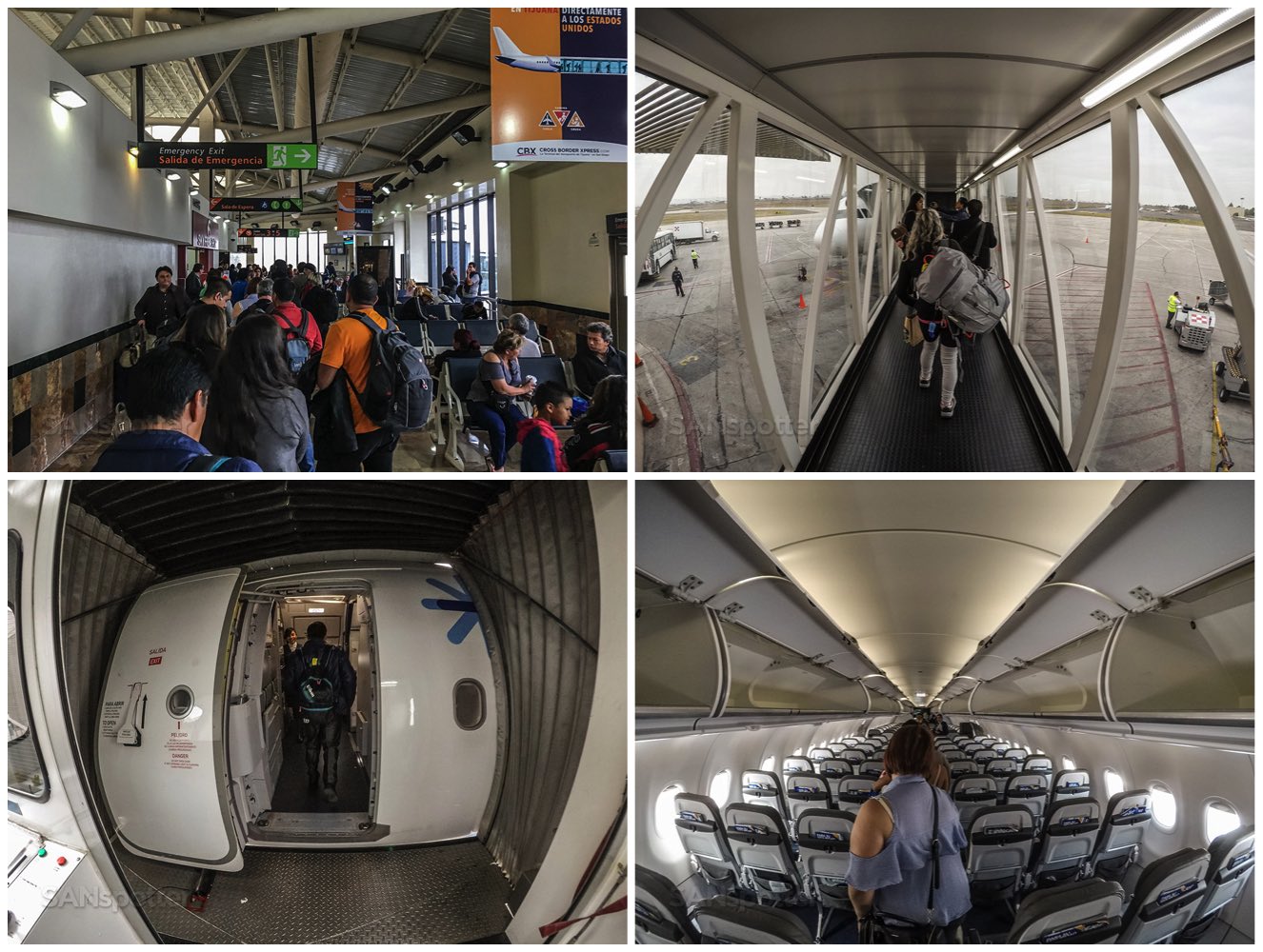 I’ve mentioned before about how much faith I have in the Mexican aviation system, but that didn’t stop me from feeling a bit of anxiety boarding this plane. A whirlwind trip on a plethora of low cost Mexican Airlines sounds nice – until you’re actually there. Time to man up and see what Interjet is all about… 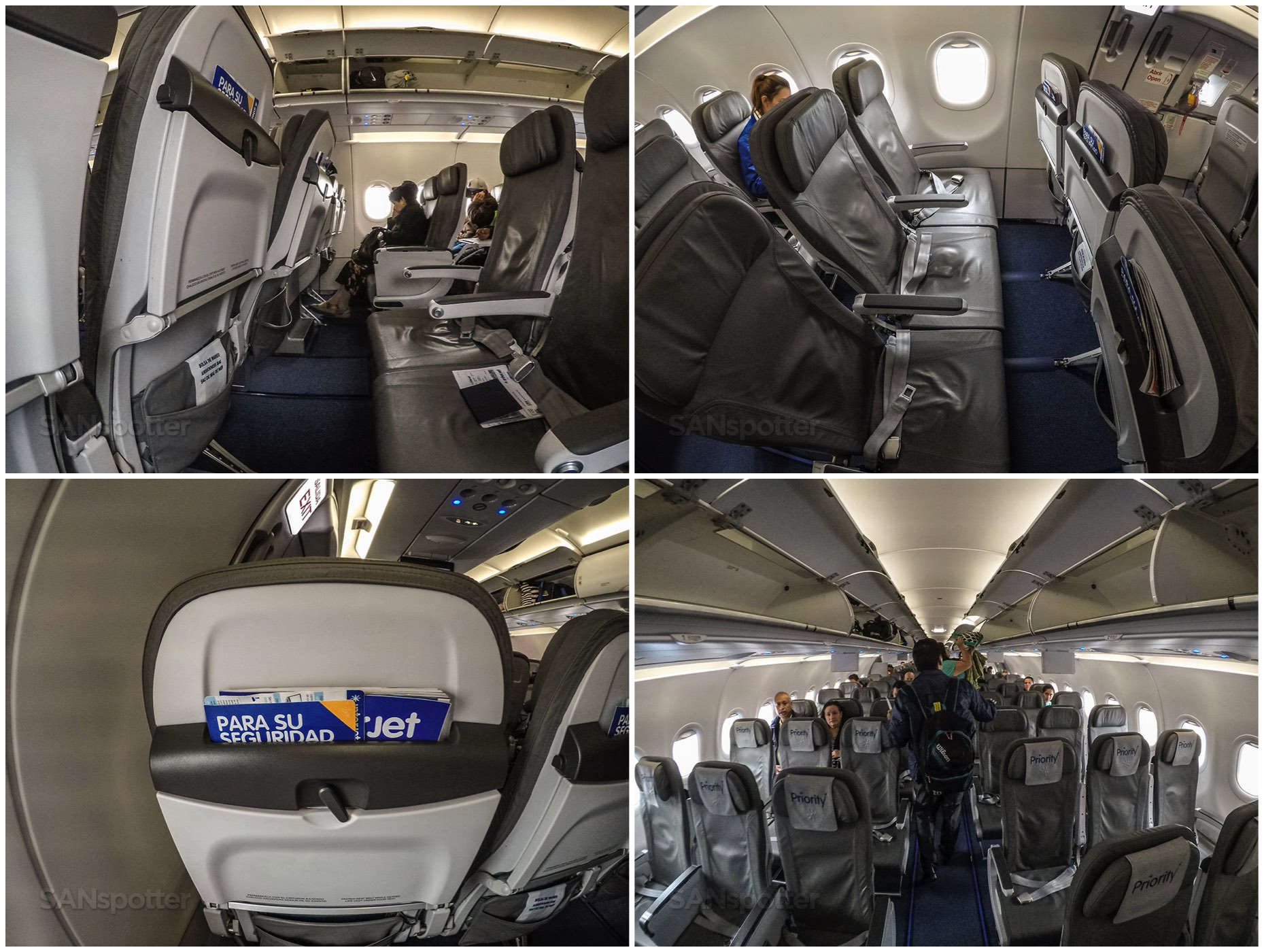 As we were sitting there waiting to pushback (there was a slight delay due to the temporary closure of MEX), The parents of the little boy sitting behind me seemed to have no issue with letting him play with his tablet at full volume. I had no idea what that kid was watching or playing, but it involved some kind of very annoying Mexican cartoon character who screamed at the top of his (her? It’s?) lungs every five seconds or so. I had a pair of ear plugs with me that I shoved as deep into my ears as I could, but it was of little relief and thought that we (me and everyone sitting around me) were in for the most annoying flight of our lives. Why are parents oblivious to this kind of stuff? 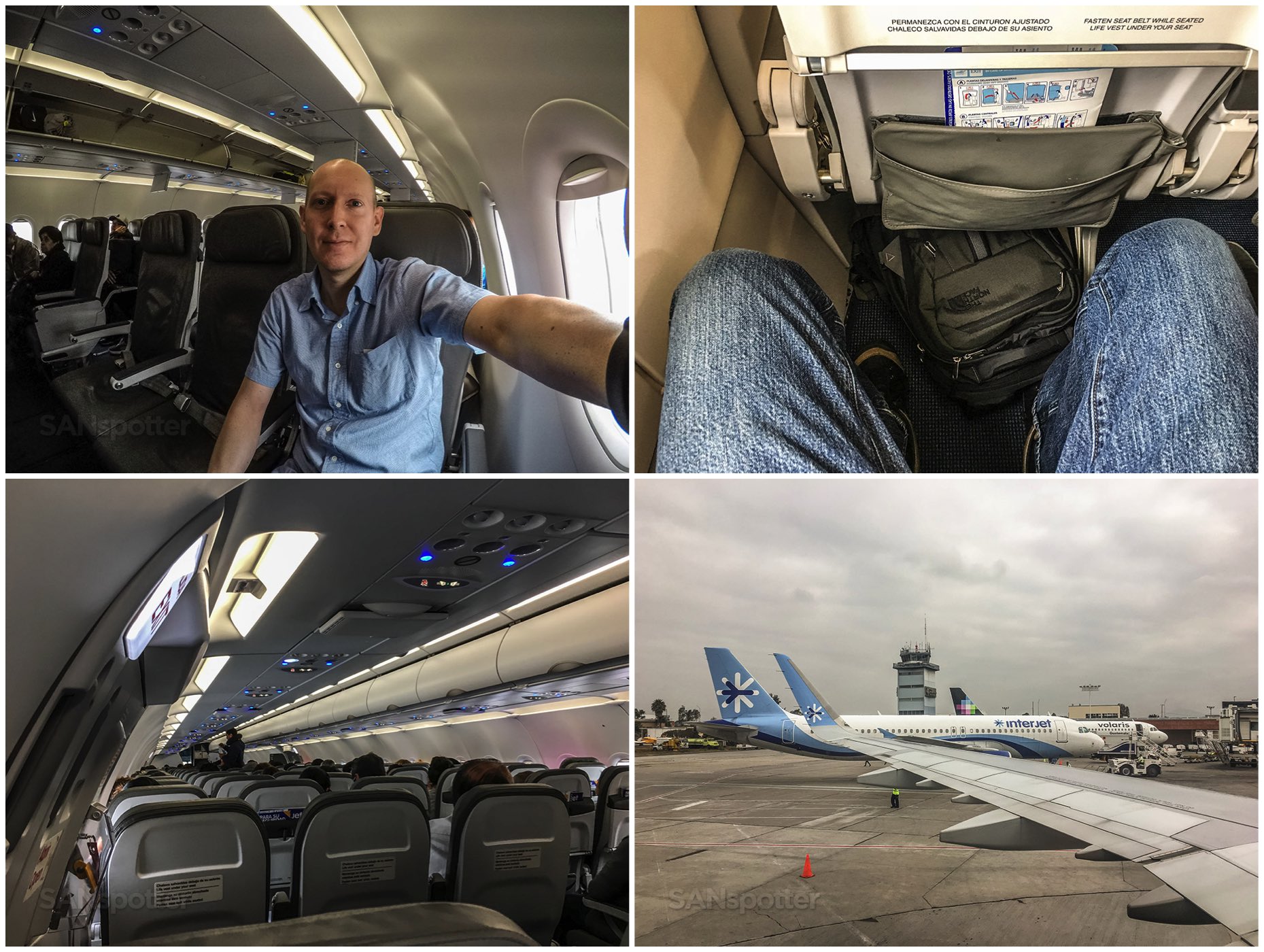 Do I look satisfied? I was actually, except for being slightly annoyed with the kid behind me playing Mexican cartoons at full volume. 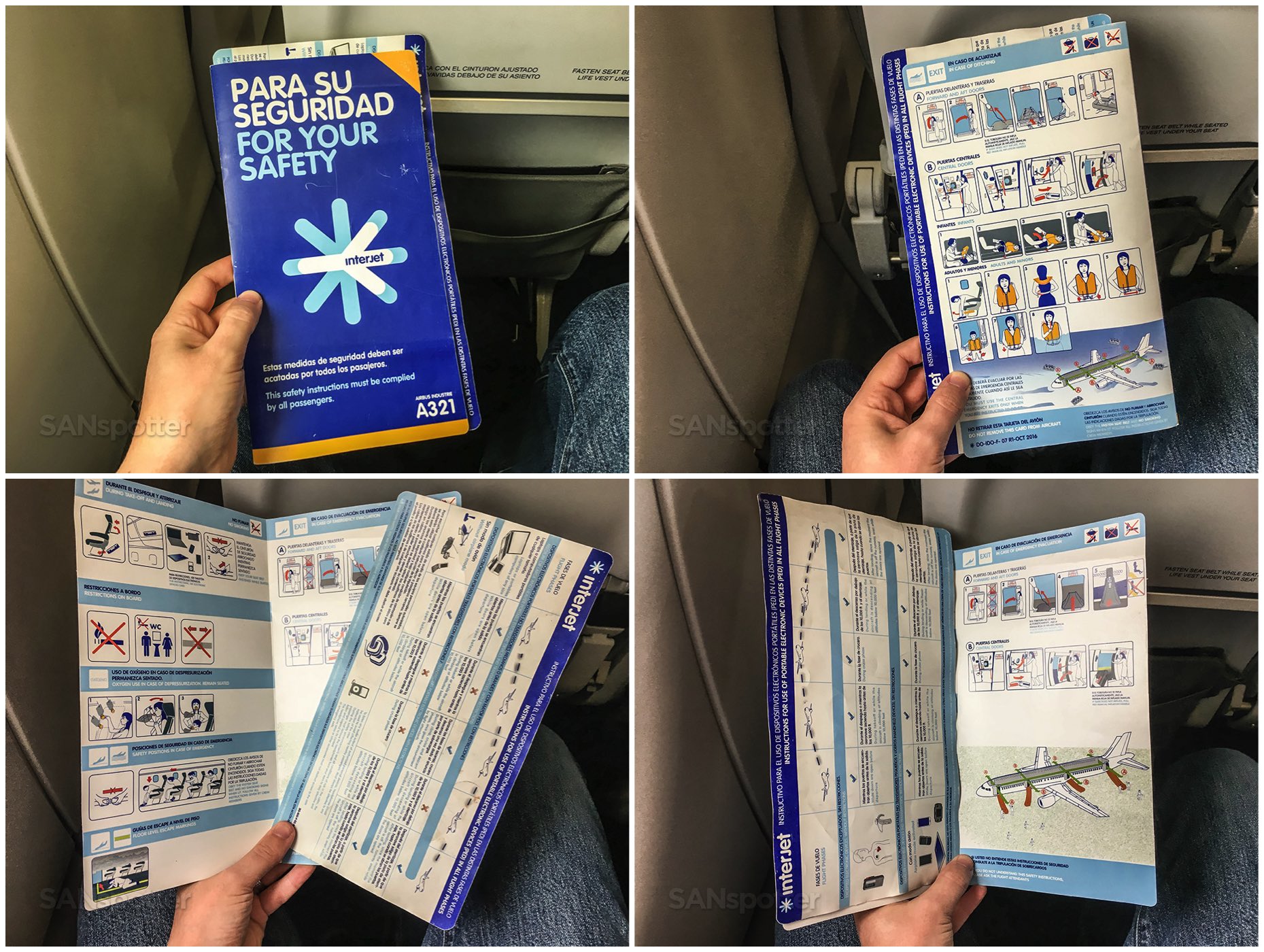 “Para Su Seguridad” – that means “free tacos onboard”, right? Brushing up on my Spanish as I perused the safety card… 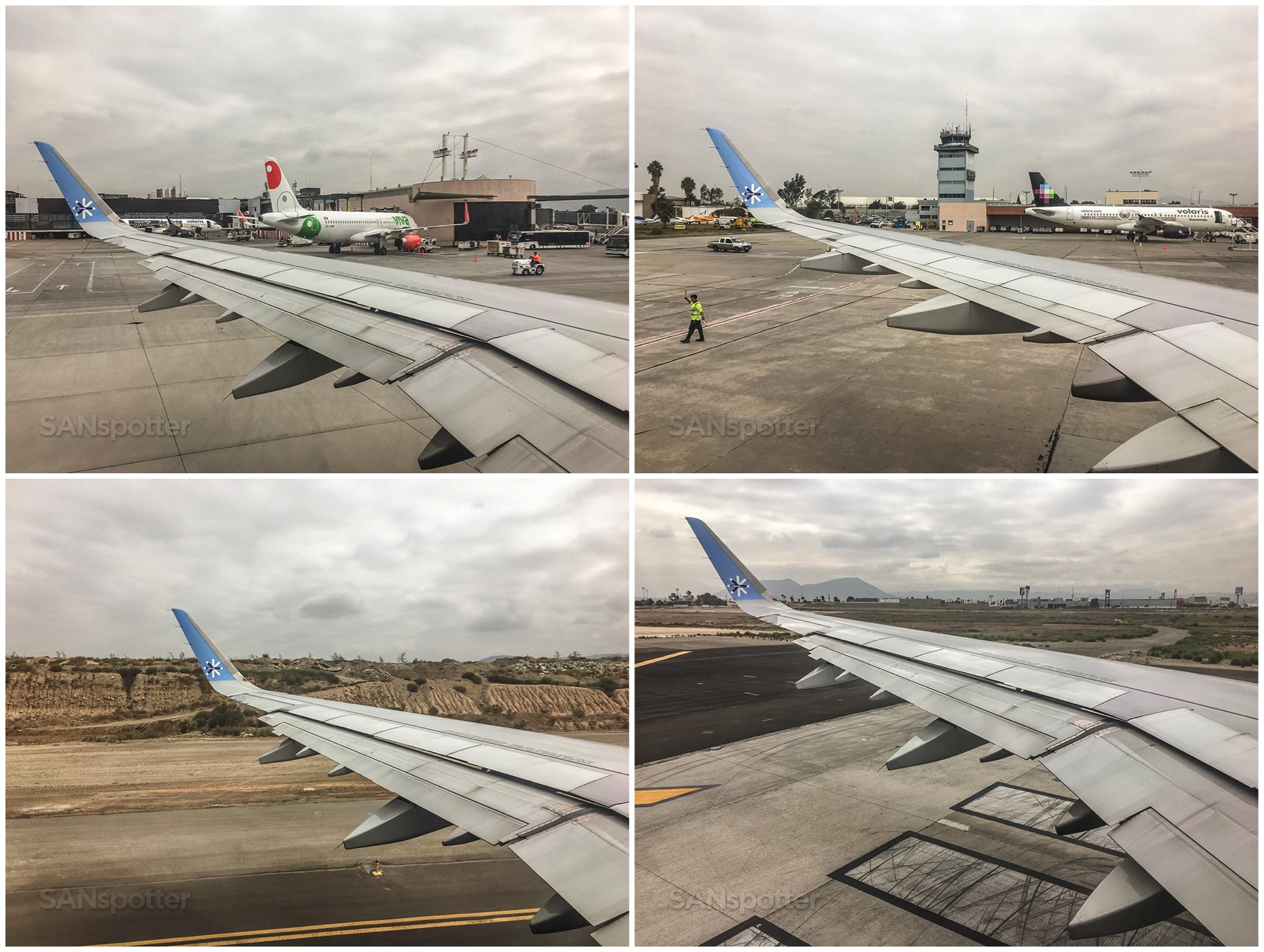 Pushing back off the gate, and what’s that I see? Why, a VivaAerobus A320, which I will get to try later today… 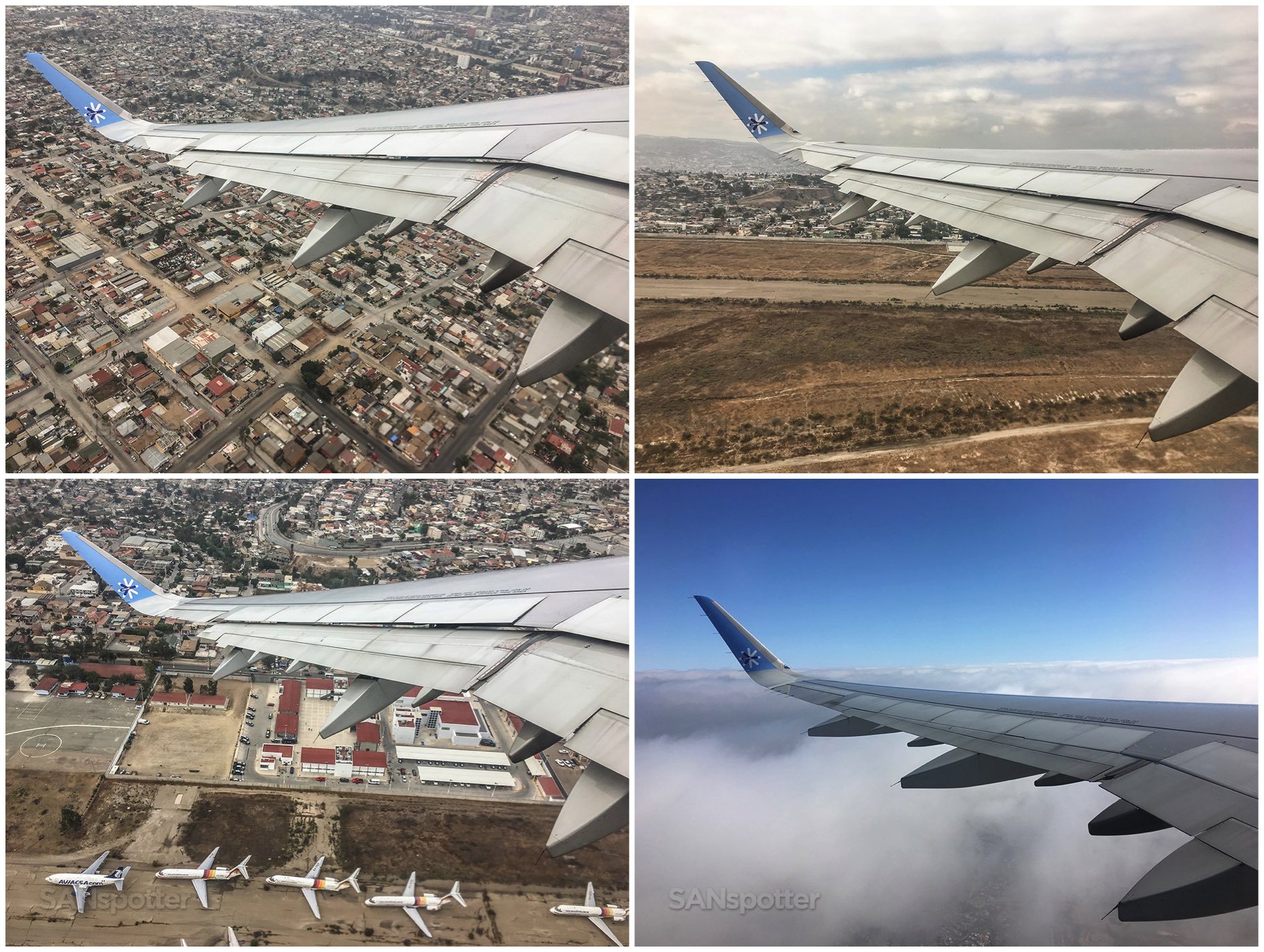 So long Tijuana! The best part of this departure (by far) were the four old Aero California DC9s parked along the airport perimeter. A total blast from the past, as I thought for sure these things were long gone.

Unfortunately, that service did not begin until one hour and 20 minutes into the flight. I really had no idea why they waited so long to start, as the flight had been pretty smooth so far with very little turbulence. The seatbelt sign was turned off 10 minutes after departure, so bumpy air was definitely not an excuse. Anyway, they served the cabin with two carts (One of the front and one of the rear) and met in the middle. Since I was roughly in the middle of the aircraft, I was one of the last to be served. No worries though, as I wasn’t really hungry or thirsty at all. 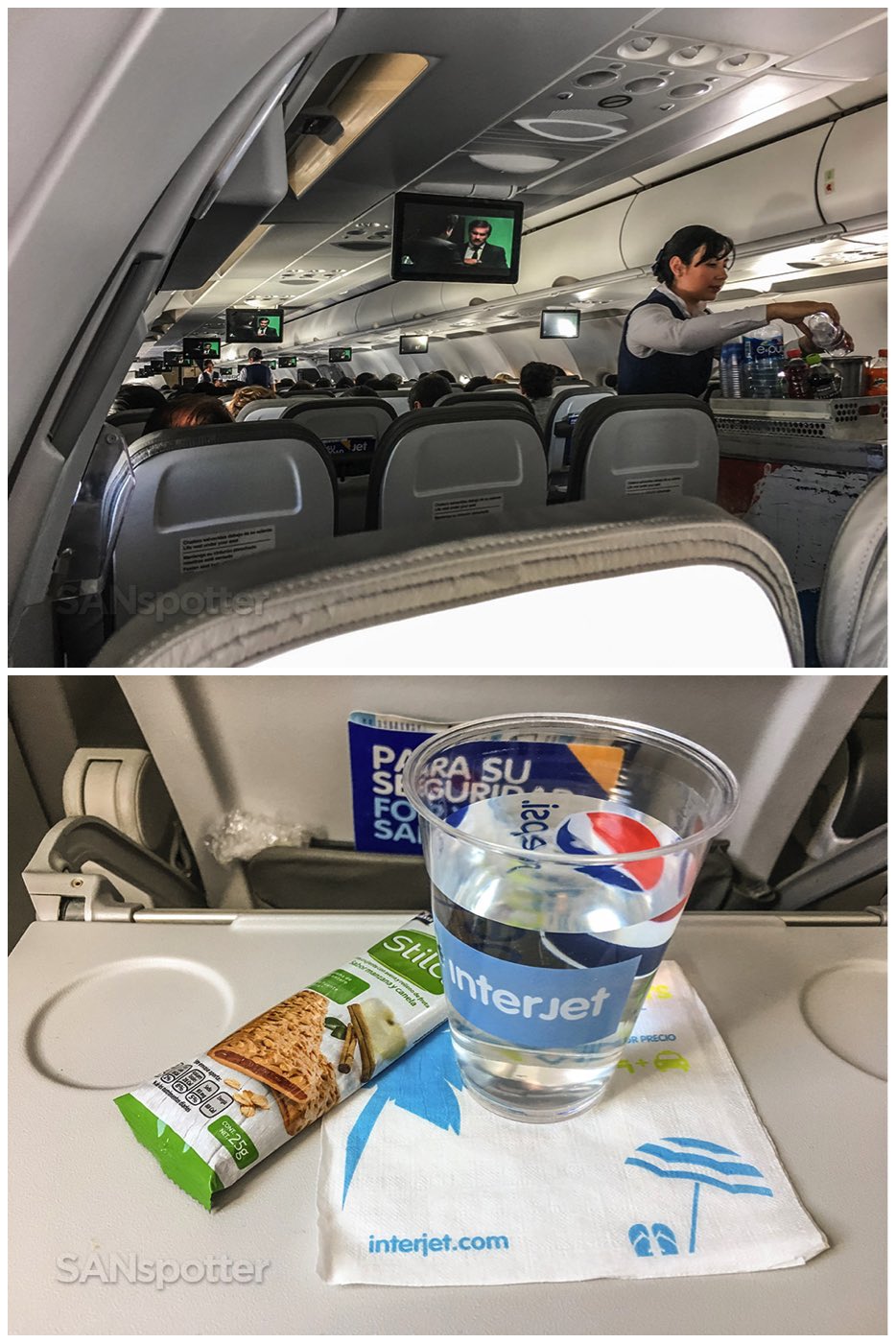 Interjet in flight service. I would have much preferred a quesadilla over this granola bar, but I’ll take what I can get. 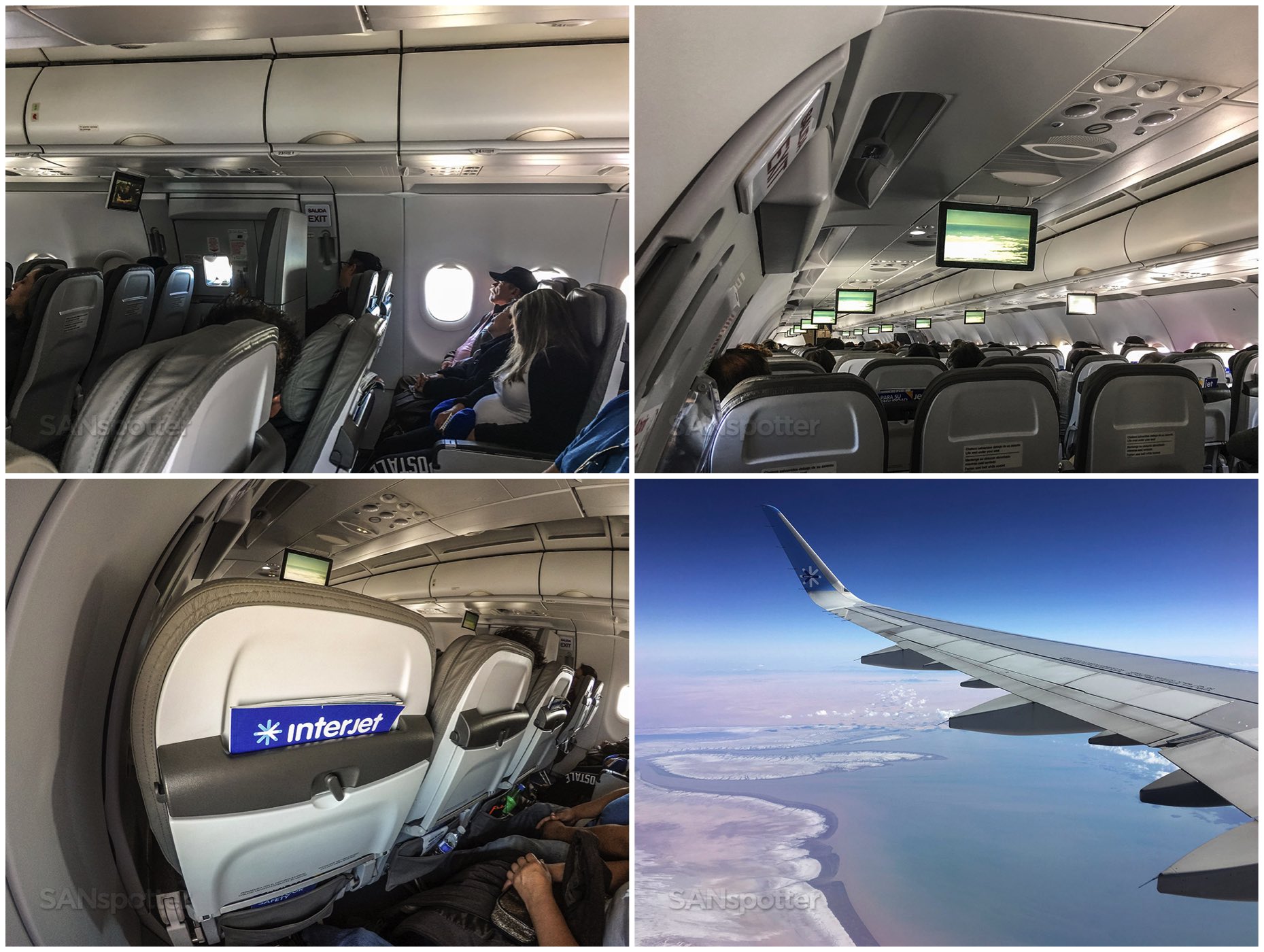 It was a nice ride to MEX on this Interjet A321. This trip is starting off well, thank you very much.

If you’ve never flown into Mexico City, I’d have to say that it’s an experience like nothing else. The size of the city is simply incomprehensible, seemingly never ending in every direction for the final 10 minutes of the approach into the airport. In all my travel around the world, there’s not a single city that I know of which spans this much surface area. Los Angeles is kind of similar, but nowhere near the size of Mexico City. Do yourself a favor and get a window seat if you ever fly into this place – you will be amazed at what you see. 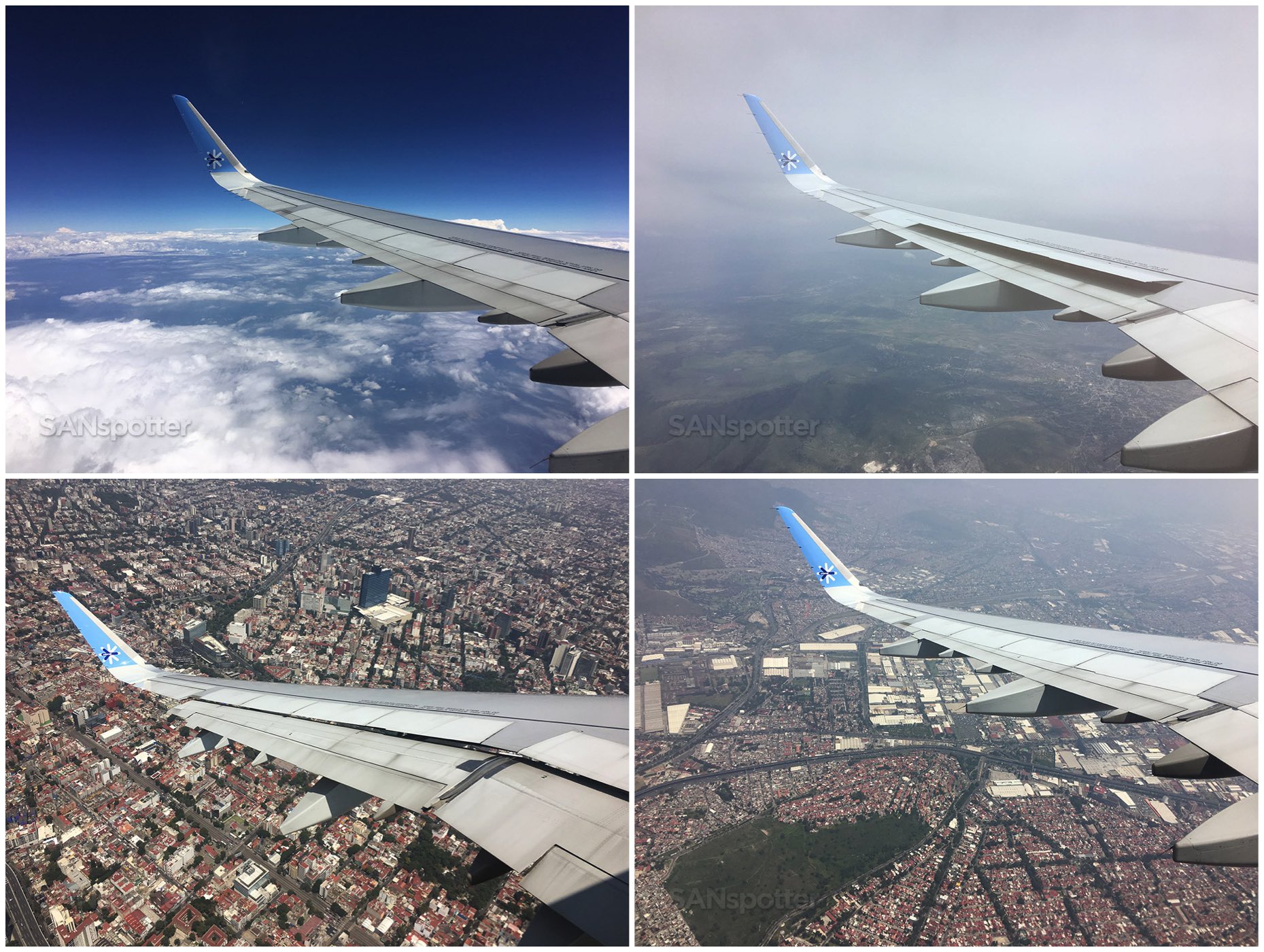 The approach into MEX is like nothing else. I double dare you to count all those houses… 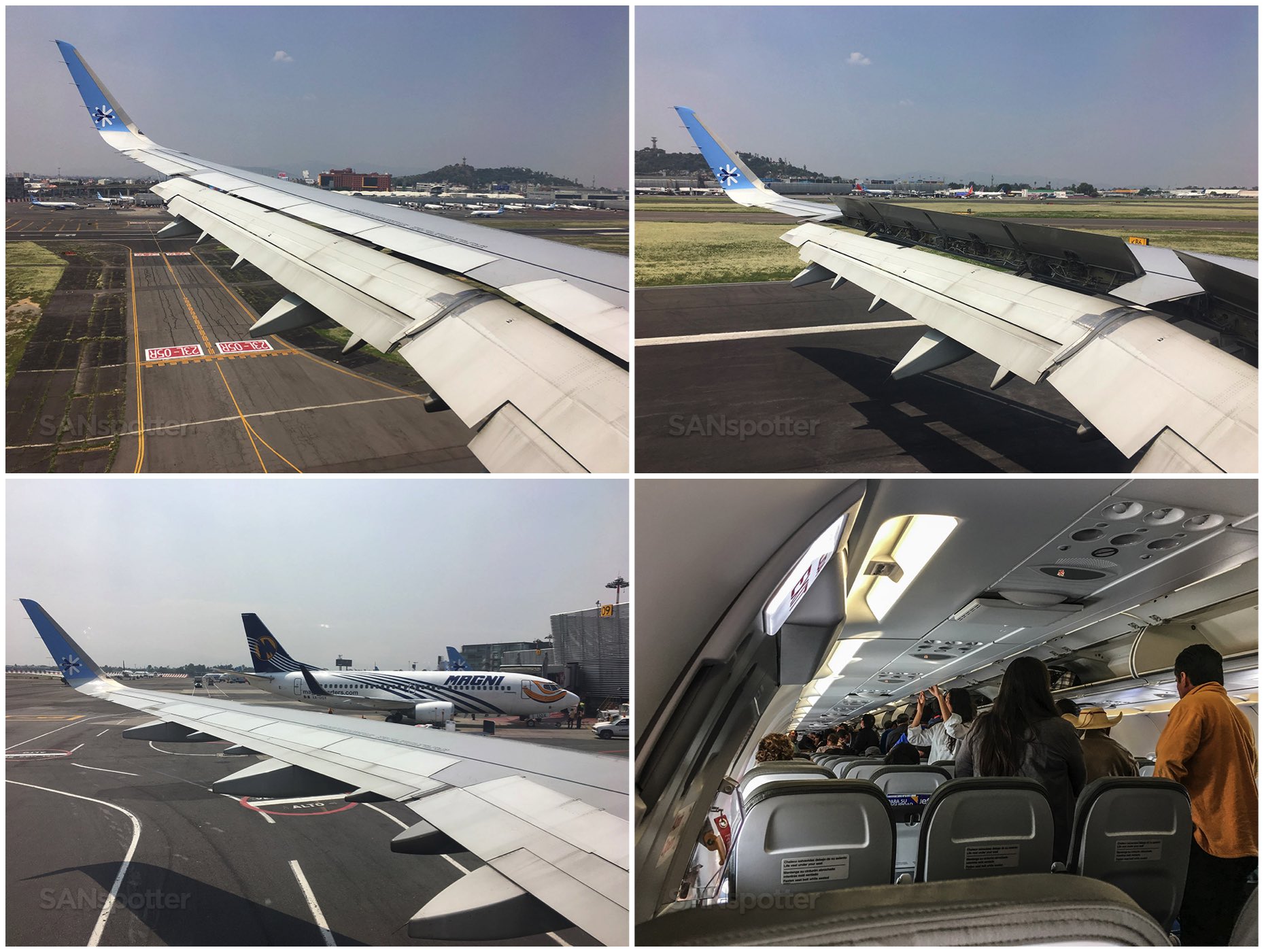 Welcome to Mexico City! And a big thanks to Interjet for getting me here on time despite the airport being closed for a few hours earlier in the day.

Overall, I would have to give high marks to Interjet and their service on this flight from Tijuana to Mexico City. OK, the flight attendants started the snack and beverage service a bit late, but otherwise this was a really good flight which was comparable to anything that you would get on a major airline in the continental US. I know that one three hour flight is hardly enough to make an informed decision, but I quite like Interjet and I’m already thinking about where I’m going to fly with them next. It will happen, and I especially hope it will be on one of those cool little SSJ 100s…