I’ve explained my feelings toward airline lounges in the past, but those of you who don’t recall, I’m about as far as a lounge snob as one can possibly get. While I agree that they are nice places to sit and relax before a long fight, I’ve never once walked into an airport thinking that I’ve just got to get to the lounge or else I’d die. It’s even like this when I’m somewhere with a really nice one such as the Virgin Atlantic Clubhouse at LHR or the Delta Sky Club at JFK. Airline lounges just aren’t that important to me – I actually like being inside busy airports, as sick as that sounds.

That being said, I’m never one to turn down the chance to check one out if the opportunity presents itself. That was exactly the circumstance that led me to the China Airlines Business Class Lounge here at TPE on the morning I returned to the US. It was there, I had the time, so I had absolutely no excuse not to go and check it out for myself. And hey – I was feeling a bit hungry, so if there was food to be had, all the better. 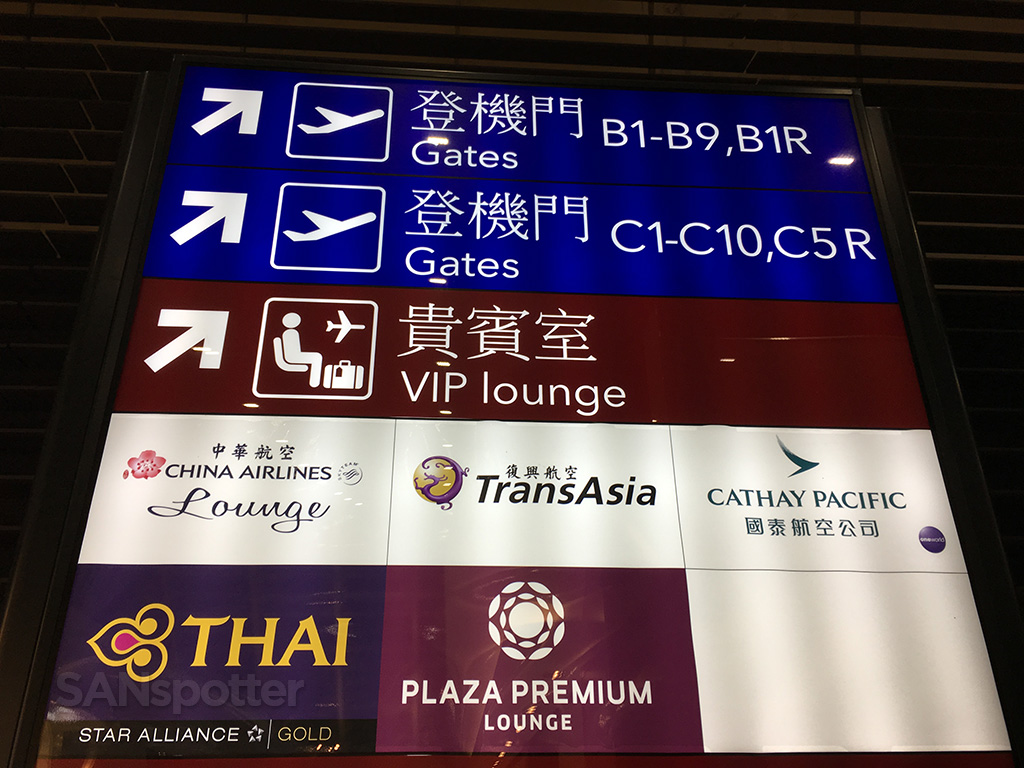 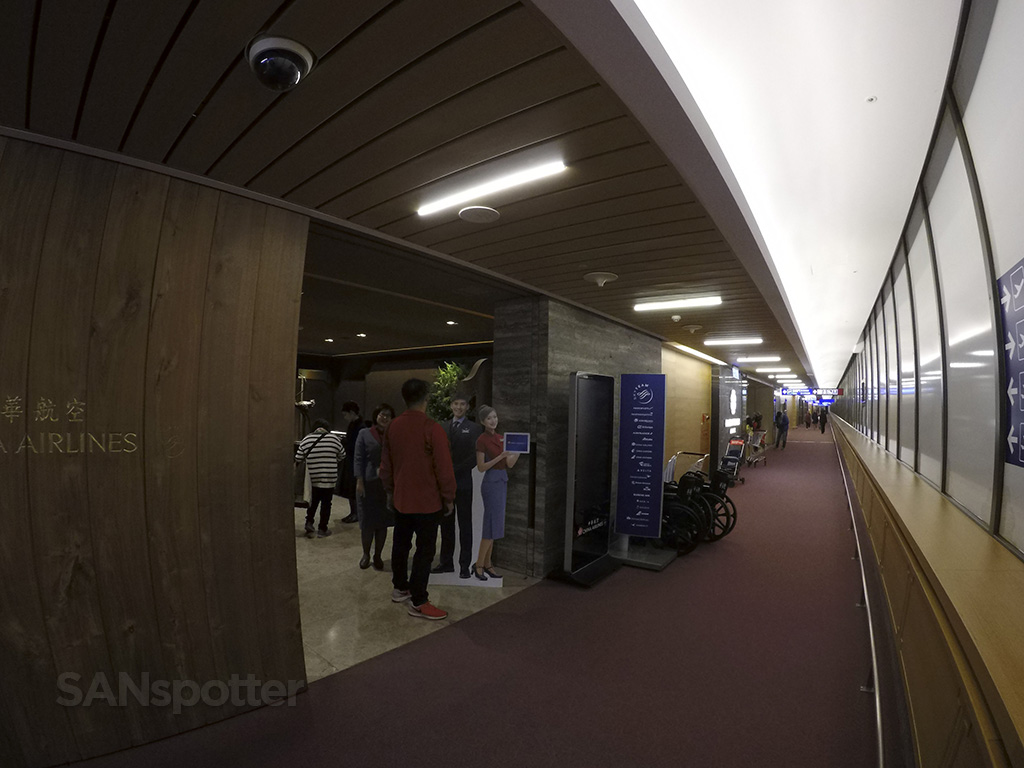 Entrance to the China Airlines Business Class lounge here in terminal 1 at TPE. 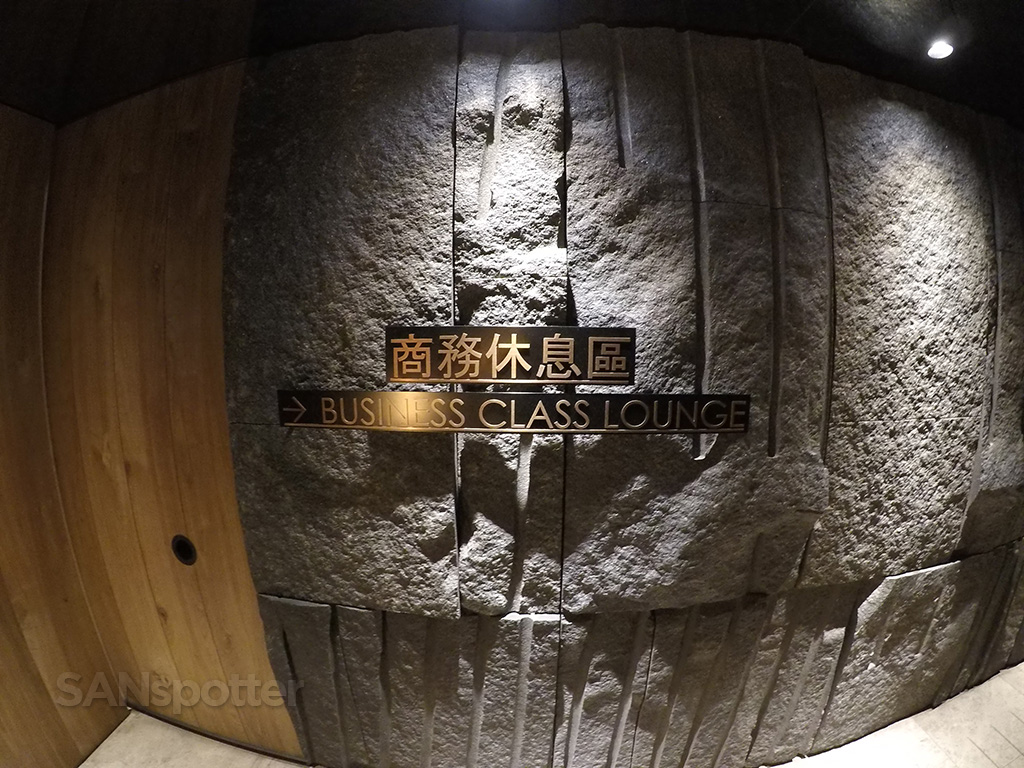 The wall textures are certainly unique. A very neat first impression for sure. 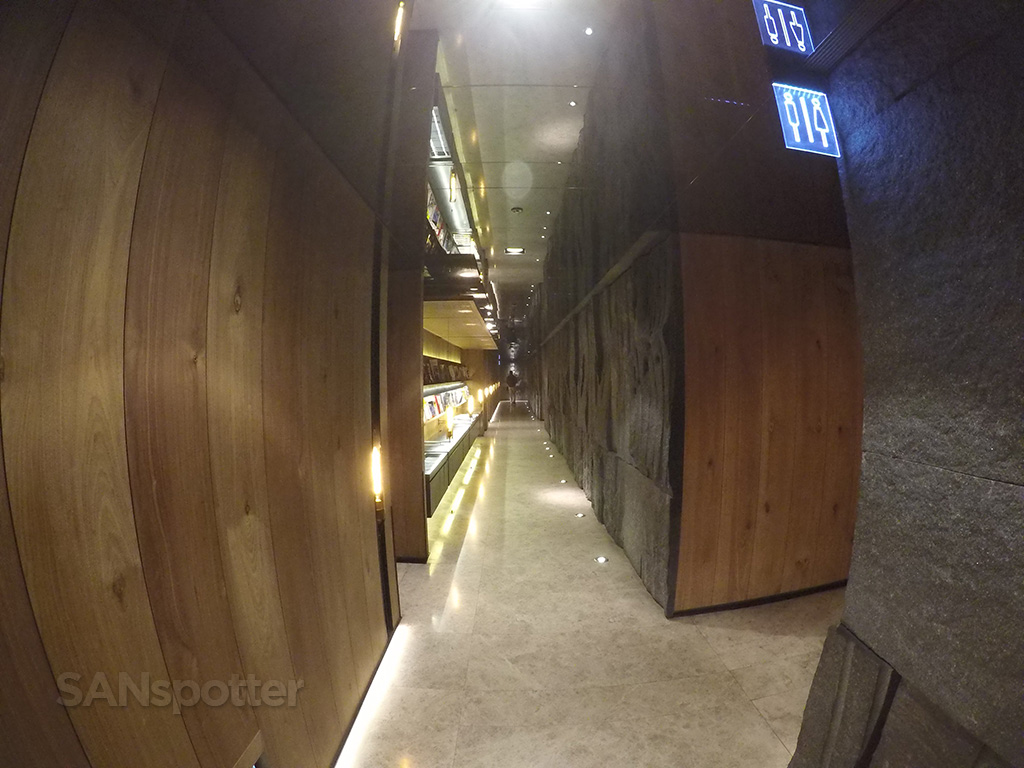 Walking down the narrow hallway that leads into the main part of the lounge. It really felt like walking into a cave!

Of all the airline lounges I’ve been to over the years, this Dynasty Lounge ranked right up at the top of the list as the one that felt like a “real” lounge. You know…dark and swanky, with a lot of plush couches in dimly lit corners. It really felt like a nightclub, and if there was loud techno music playing and the stench of alcohol in the air, it wouldn’t have seemed totally out of place. 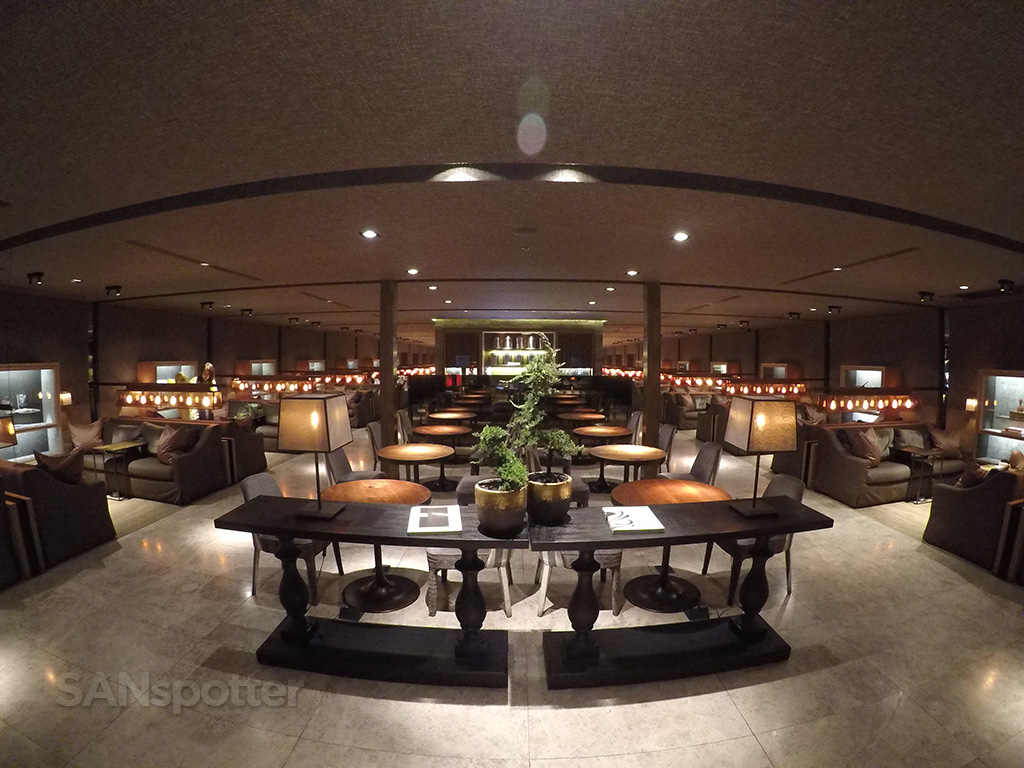 Thankfully, instead of smelling like alcohol, the aroma of this lounge was rich with freshly cooked breakfast. It hit me hard as soon as I walked through the main entrance, and it lured me all the way to the back before I could even stop to put my bag down or take any pics. I wasn’t that hungry, but boy did that spread smell good… 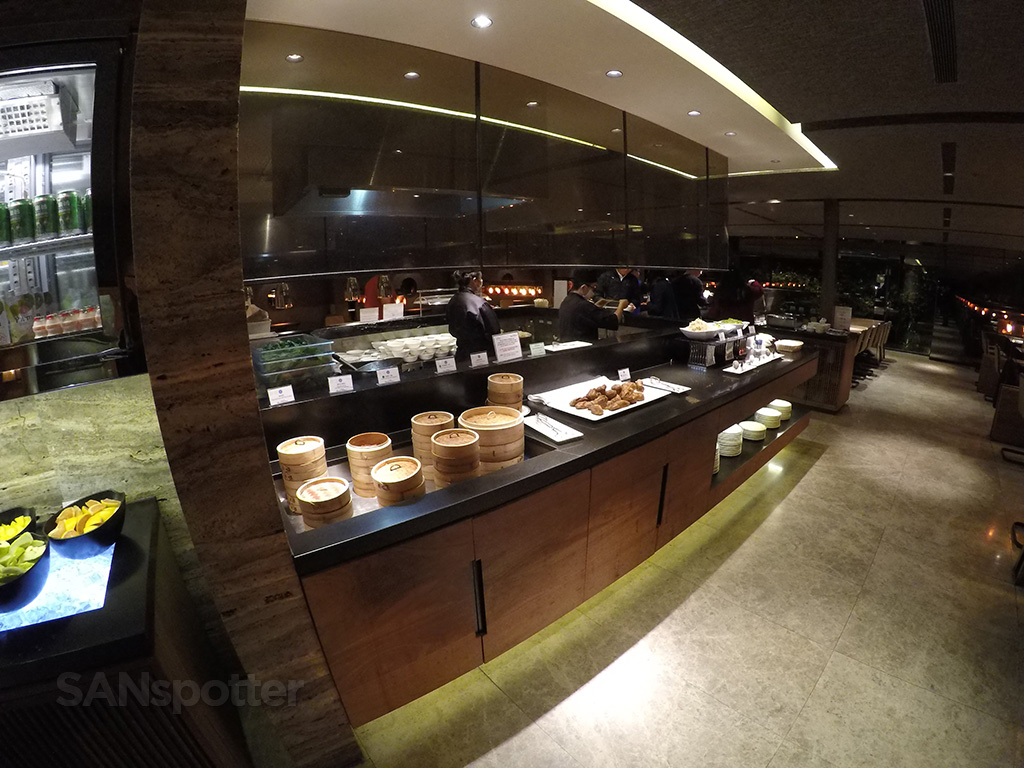 The amount of hot and fresh food in this lounge is probably the best I’ve ever seen. 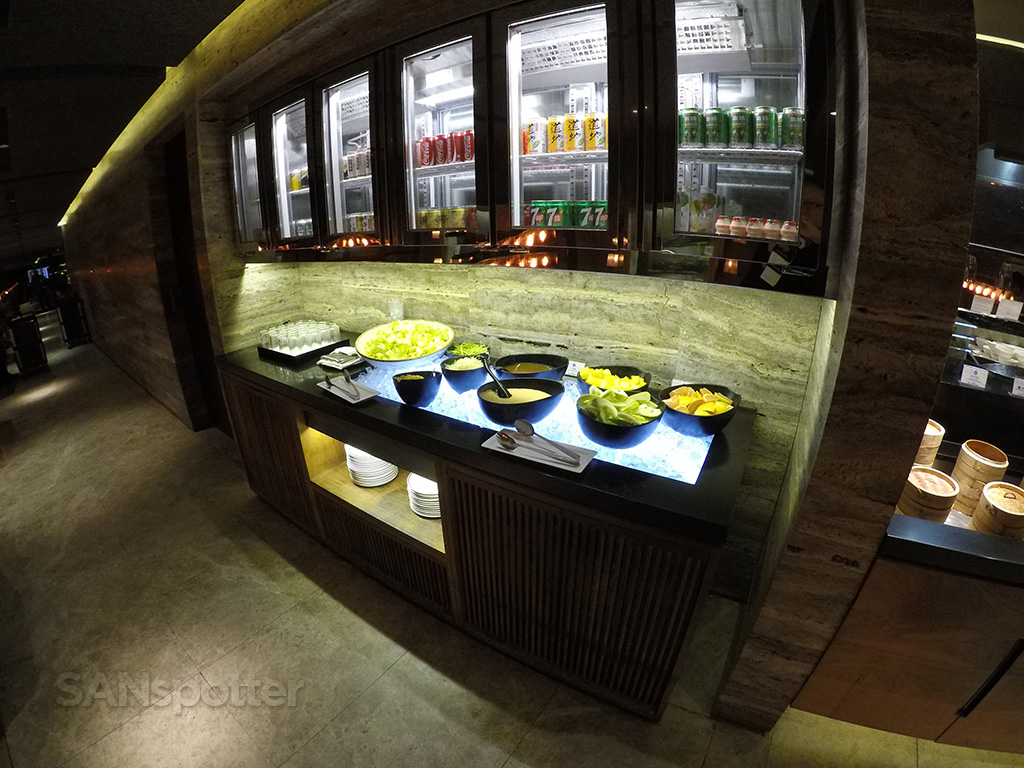 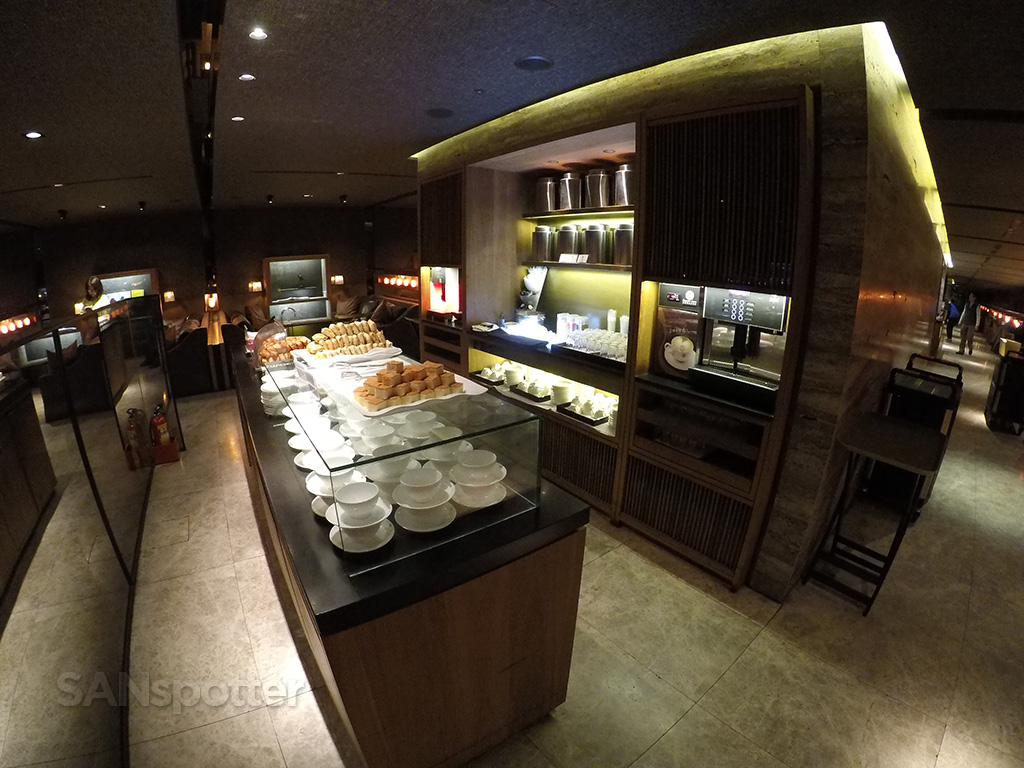 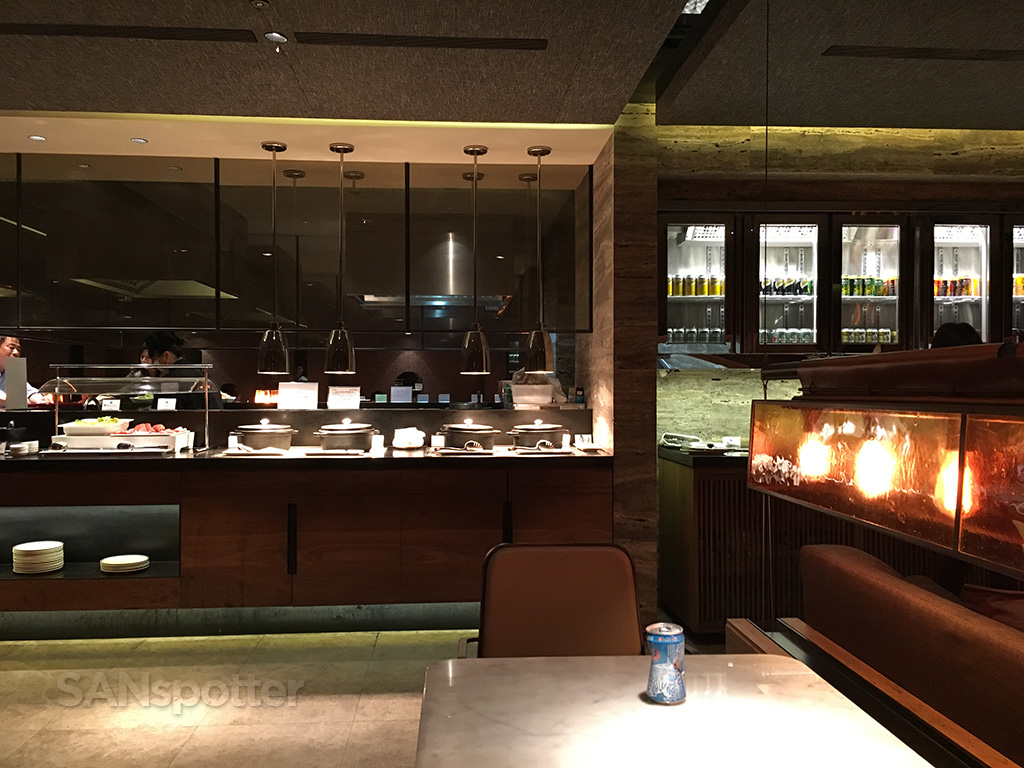 Hot breakfast items such as eggs, potatoes, congee, and sausages. It smelled good in here! 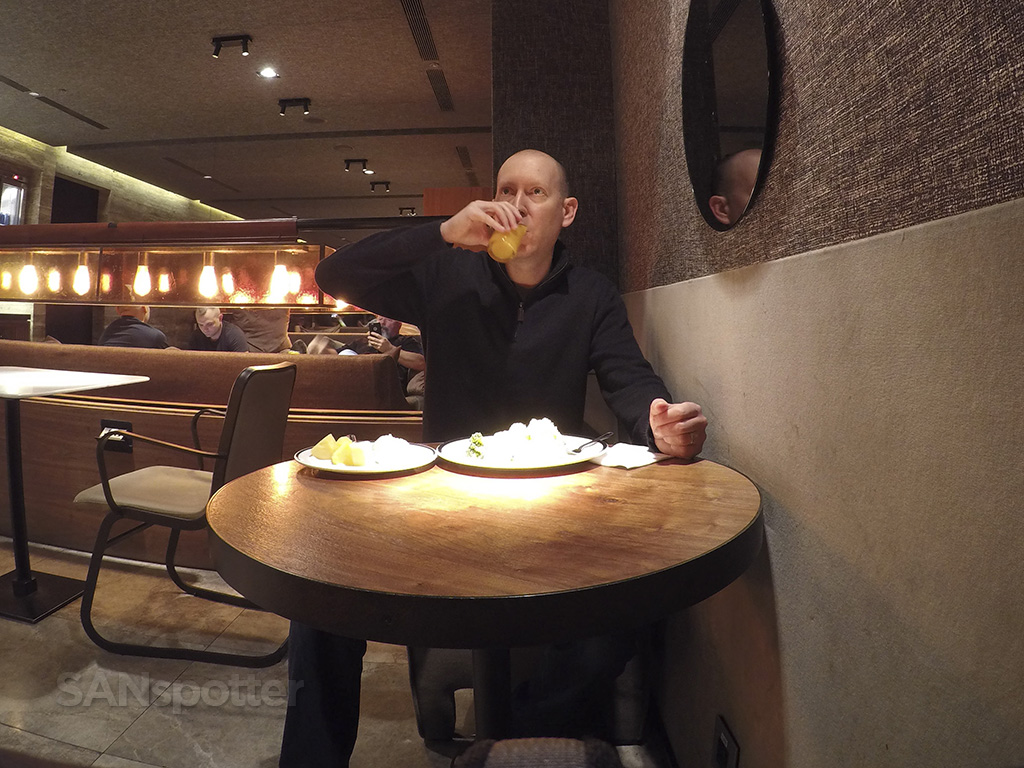 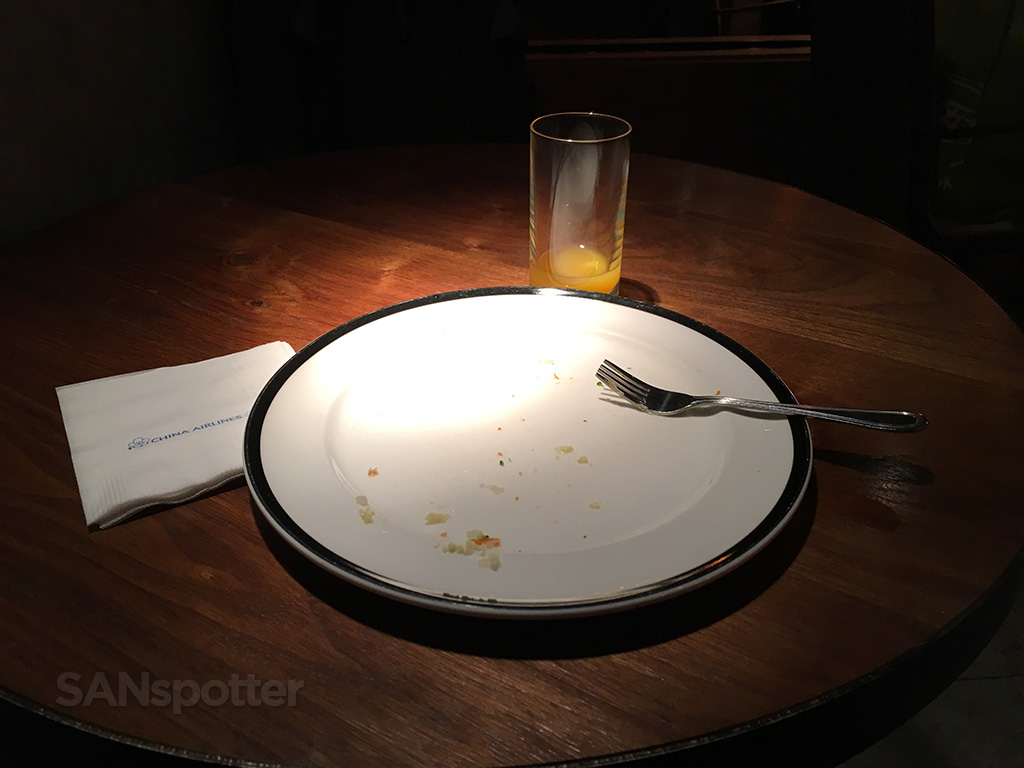 Ahh, that hit the spot.

I had a better look of the place after finishing my meal, and I couldn’t help but to think that this Dynasty Lounge was a bit too dark and dreary for my tastes. It would certainly be a cool place to hang out with friends and have some drinks, but as a airline lounge, it didn’t feel right. It was simply too dark to get any work done IMHO, so business travelers who are looking for an oasis between flights to catch up on things might not find this to be the optimal working space. Just for comparison, the American Airlines lounge at LAX is the perfect example of a lounge that’s comfortable and bright enough to work in. 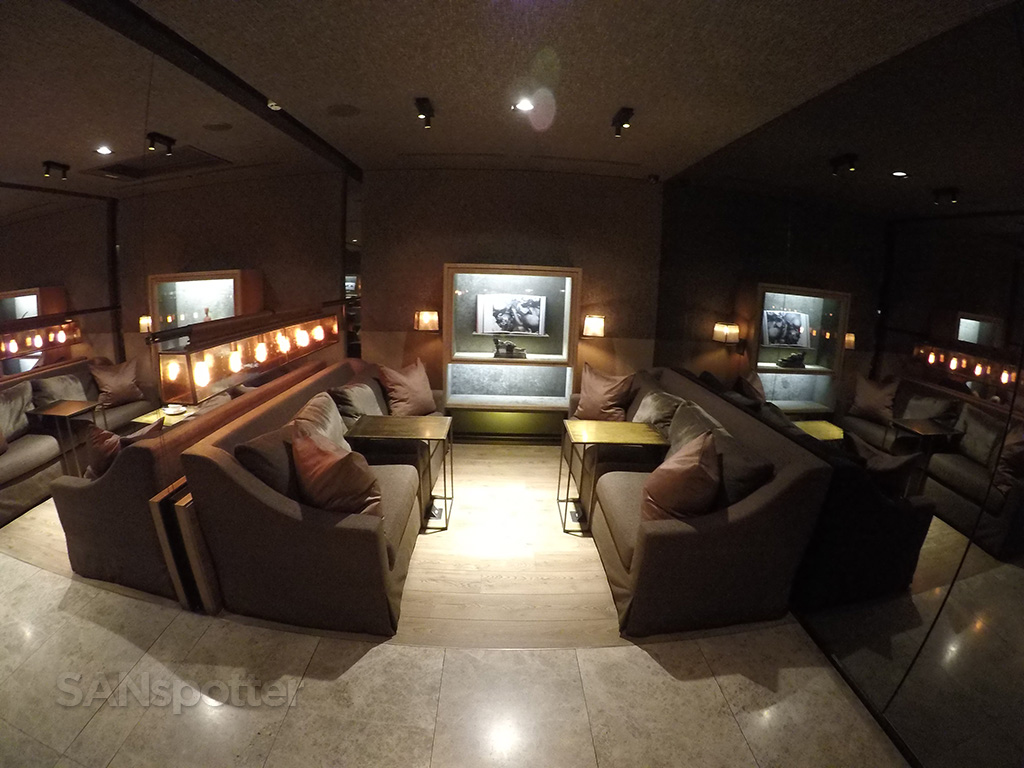 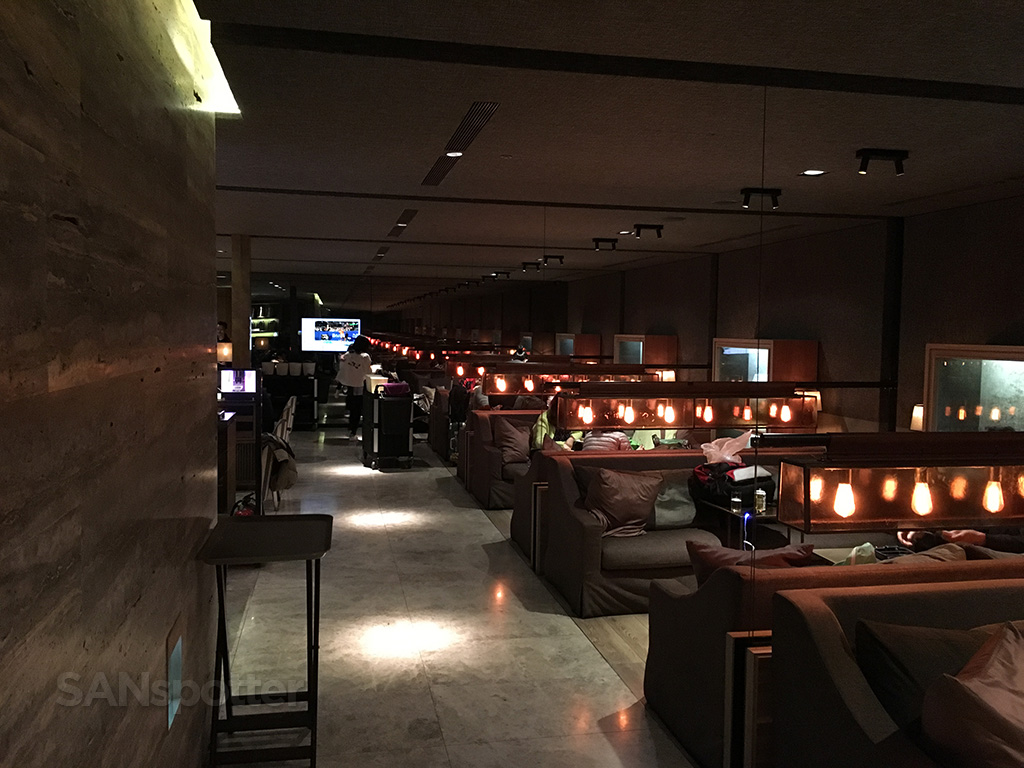 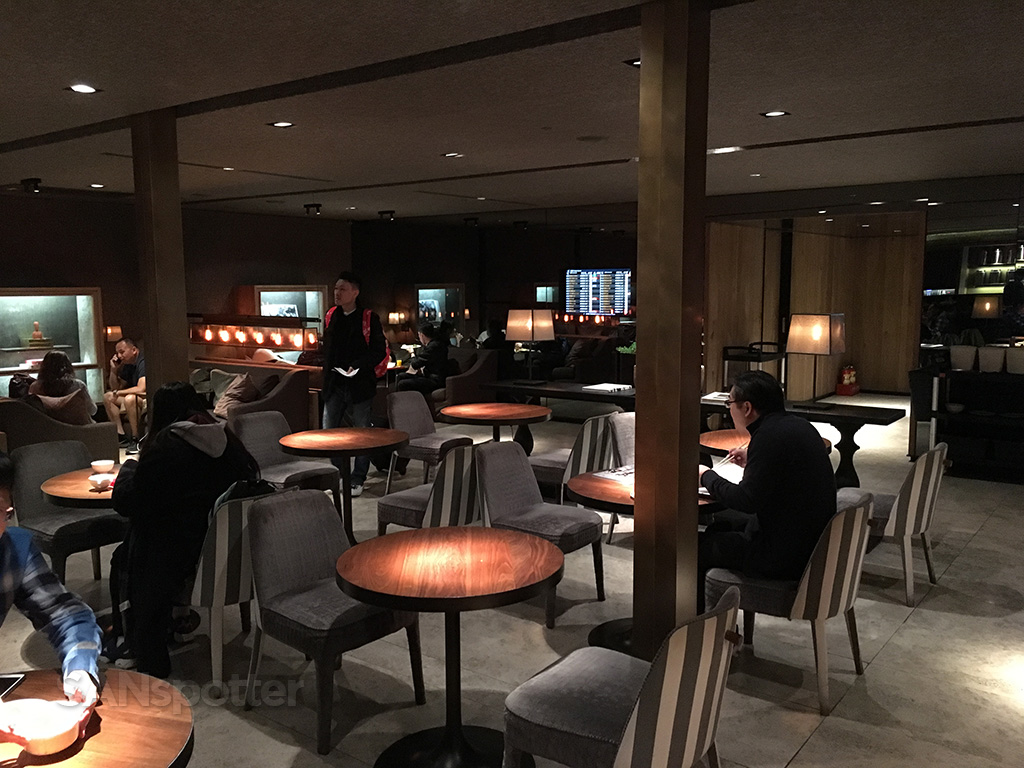 There were plenty of other types of seating options though. There were individual tables like this… 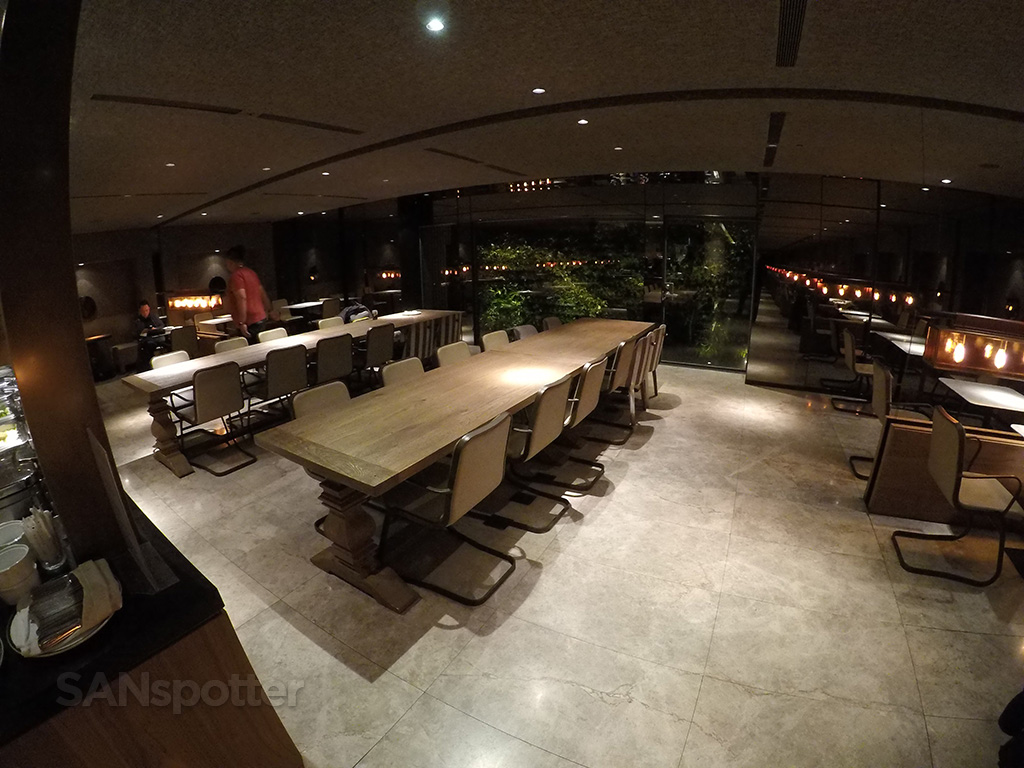 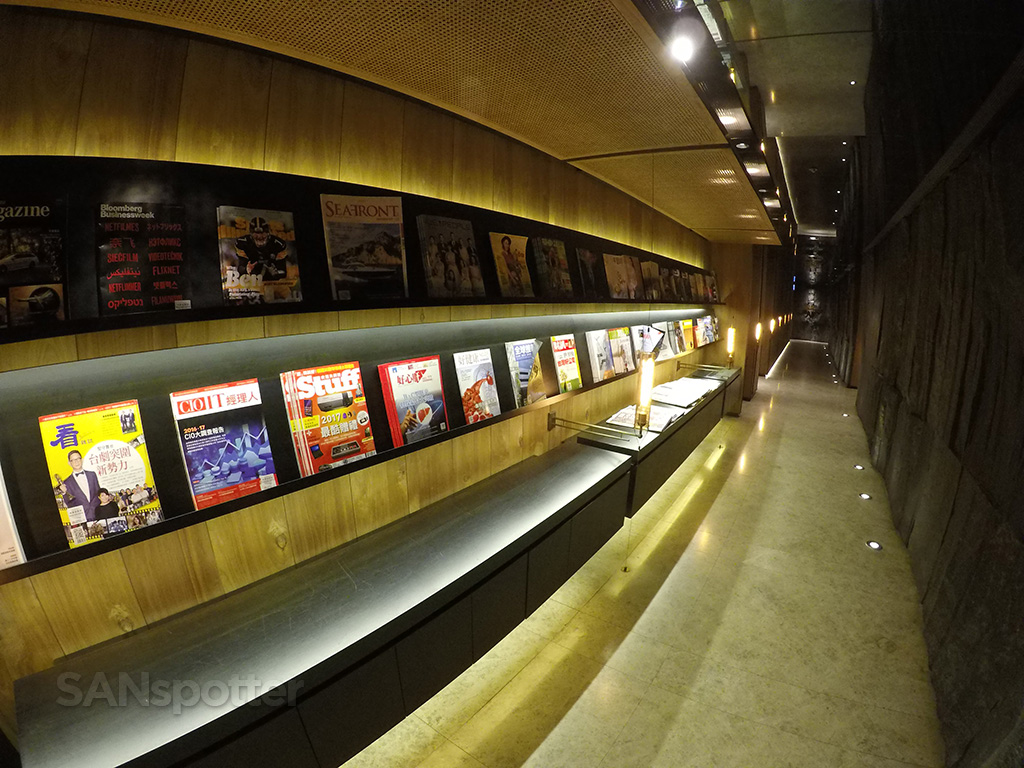 Magazine and newspaper section in the hallway leading to the exit.

Darkness aside, this is a very well-designed layout which seemed perfect for the weary traveler who needs a dark hole to hide in for a few hours. Especially considering that there aren’t many other public spaces in the terminal at TPE to find peace and quiet that the Dynasty Lounge can offer.