I’m being totally honest when I say that airline lounges aren’t really that important to me. Yes indeed, I’m that much of an airline nerd that I actually enjoy the ambiance of a busy airport terminal – and when I’m sitting in a lounge all I can think about is what I’m missing “out there”. However, there are times when I can highly appreciate the peaceful serenity of of a quiet lounge with decent food and this particular morning at LHR was one of them. It was early, I was tired and hungry, and the Virgin Atlantic Club House (Upper Class lounge) was exactly the thing I needed to get my day rolling.

Since I stayed at the LHR Hilton the night before, getting to the airport that morning was very quick and effortless. So effortless, as a matter of fact that I found myself at the dedicated Virgin Atlantic check in lounge (Departures Clubhouse) well before it had even opened.

Yes, that’s right – Virgin Atlantic has a dedicated check in lounge for business and first class passengers, which allows passengers ticketed in those cabins to bypass the main check in area at terminal 3 altogether. It’s so well designed that I actually walked into it thinking it was the actual departure lounge – so I was a bit confused at first as to why I was the only one there…

Luckily it only took a few minutes for the dedicated security lane to open, and I was the first one to go through. Actually, I was the only passenger there and I didn’t have to wait for anything, so I felt a bit special – at least for a moment. To be honest though, at this time of the morning, the normal terminal 3 security line looked to be fairly empty as well, so it didn’t even matter which line I used. But it was still fun to use the dedicated line!

I had assumed the dedicated security checkpoint would dump out into the actual Virgin Atlantic Club House, but to my surprise, the exit leads out to the main terminal, and then from there it requires a fairly long walk to the lounge itself. Not a big deal, but it did feel like a somewhat disjointed experience.

I arrived at the entrance to the lounge shortly after 6am, so I had to wait a bit since it didn’t open until 6:30. At least there was really nice and comfortable seating just outside so waiting was a non-issue.

Once inside, I was blown away at how large and diverse it was. I knew it would be highly stylish (this is Virgin Atlantic after all), but I had no idea it would be broken up into so many different sections with everything from wide open communal seating to private quiet rooms.

Food options were quite impressive as well – especially the complimentary/free food. There was a fully stocked (and staffed) breakfast bar stuffed to the gills with cereals, breads, and fruits that was really nice to see – it was exactly the kind of breakfast I was looking for.

There was also a full restaurant with food for purchase, but the food I got from the breakfast bar was all I needed to hold me over until lunch on the flight to JFK.

I’m going to go out on a limb here and declare this Virgin Atlantic Club House as the best airline lounge I’ve ever ever experienced. Yes, even better than the LAX Star Alliance First Class lounge – which wasn’t really all that impressive anyway (but it should have been, on principle). The LHR Club House is large, stylish, very diverse, and well staffed with friendly attendants. A very nice introduction to the Virgin Atlantic experience, that’s for sure. 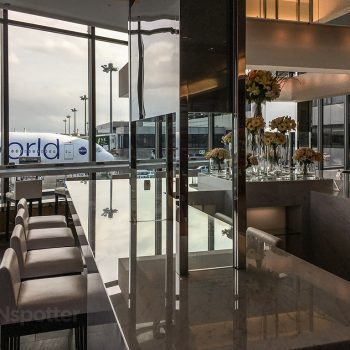 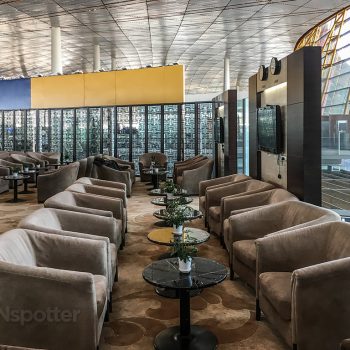