I did very little research prior to this trip, and one of the things that I just naturally assumed was that there would be a Virgin America lounge in our departure terminal (2) at SFO. I assumed wrong. It turns out that the only Virgin America lounge is located in the international terminal, which totally bummed me out because I really wanted to check it out.

It also bummed me out because ever since I introduced my wife to airline lounges during our trip to Japan last year, she’s become a huge fan – and I was looking forward to being able to treat her with another lounge visit on on this trip.

After some thinking, I remembered that I had just received my Platinum American Airlines AAdvantage MasterCard, which comes with a complimentary system-wide membership to their lounges. And since there is an AAdvantage lounge in terminal 2, that’s exactly where we went.

As far as domestic US airline lounges go, this one wasn’t any more special than anything I’ve visited so far. Although it opened in 2011, It actually felt a little old and tired – though it was certainly comfortable and well laid out with a really nice view of the ramp outside. 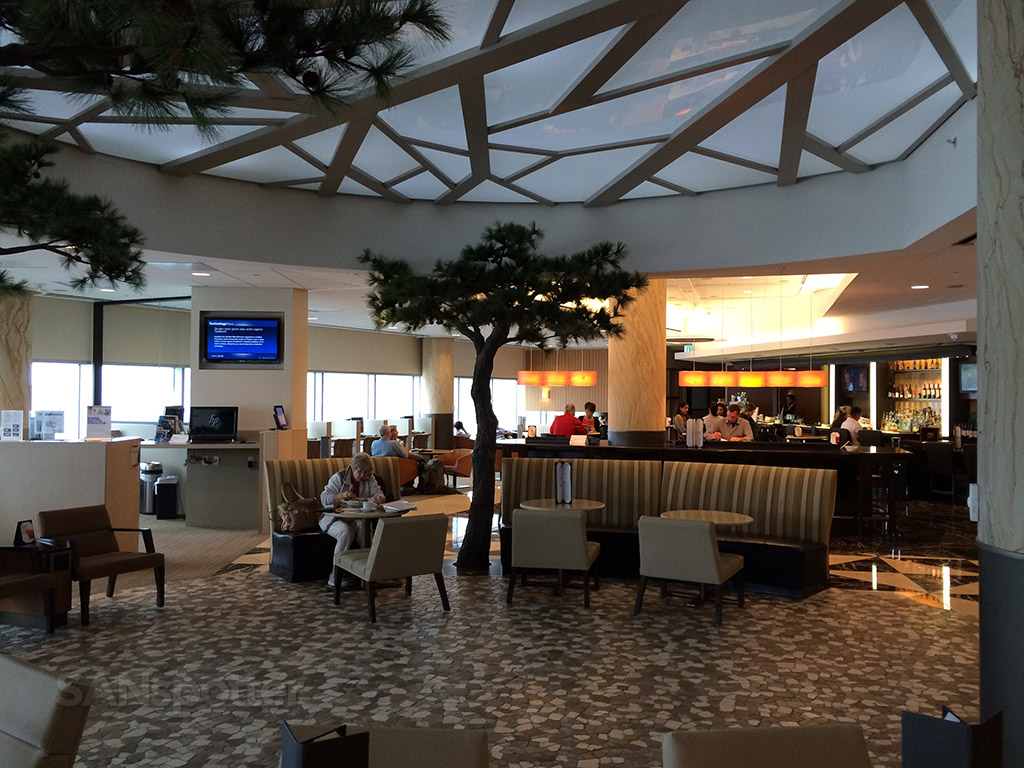 Standing directly in the center of the lounge, looking towards the bar area

Complimentary snacks and beverages were lacking, with a small variety of fresh fruit and small pastries. Coffee and juices were also available for free, but if you want anything more substantial, there’s a full service bar with a much wider variety of choices available (for a price). 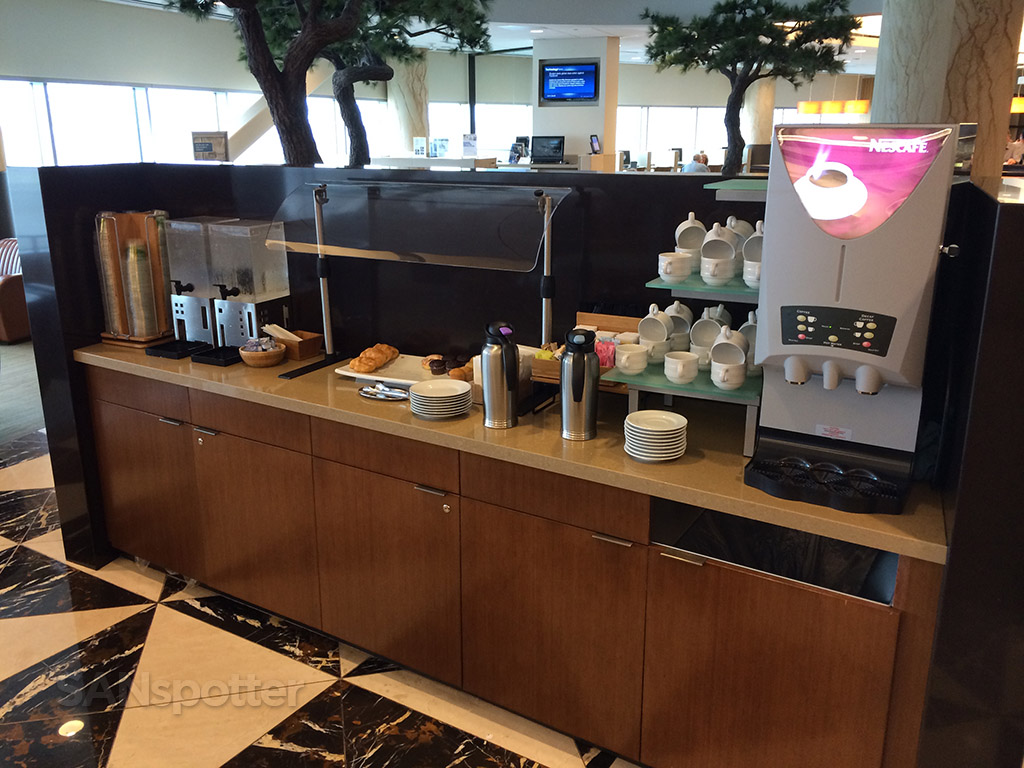 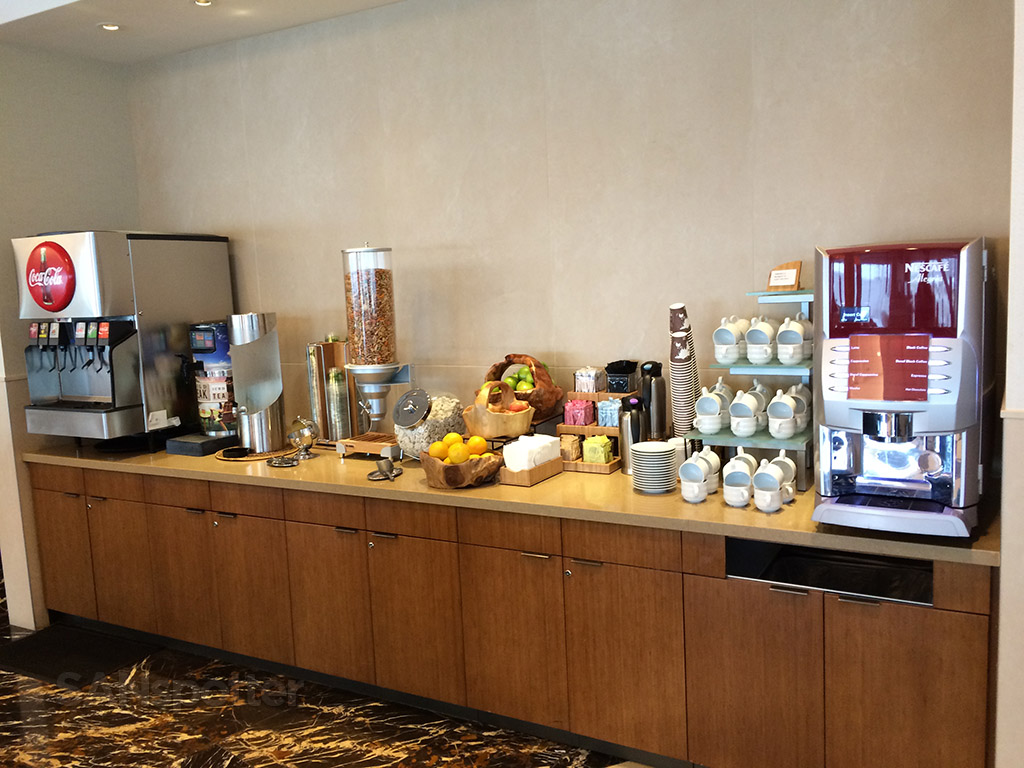 The other self-service snack bar located against the back wall 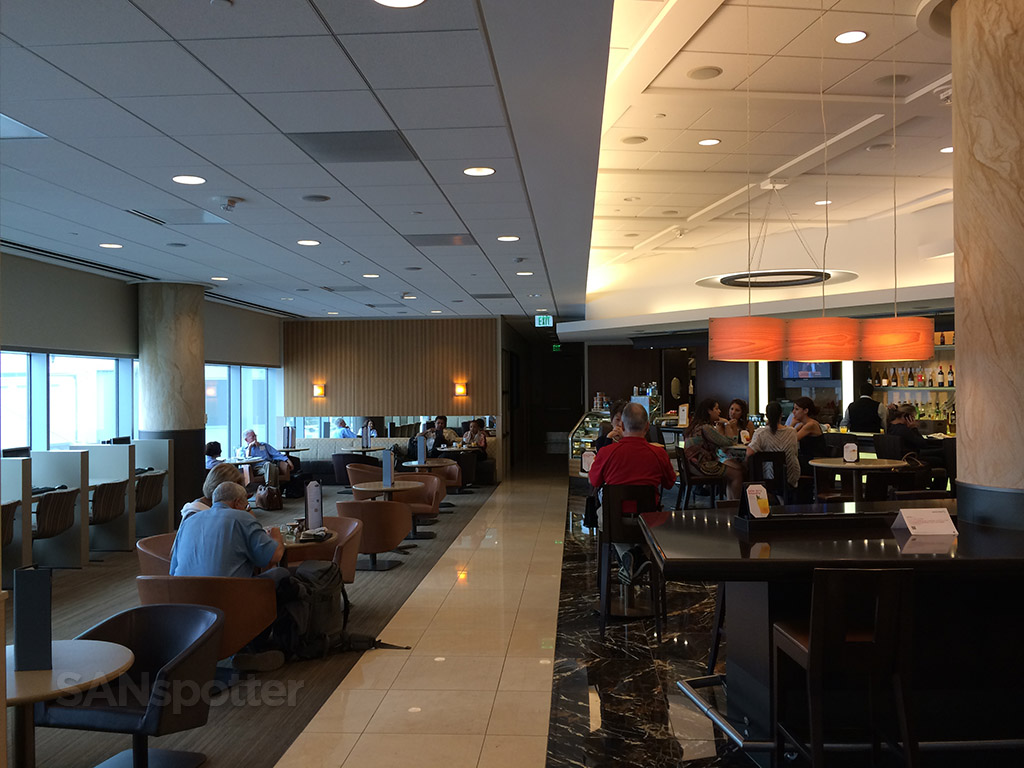 A closer look at the bar area

There was also the option to order real food from a rather extensive menu of options, though I didn’t try due to the fact that we didn’t have much time before our flight was scheduled to depart and I wasn’t very hungry anyway. I was happy enough just to munch on an apple. 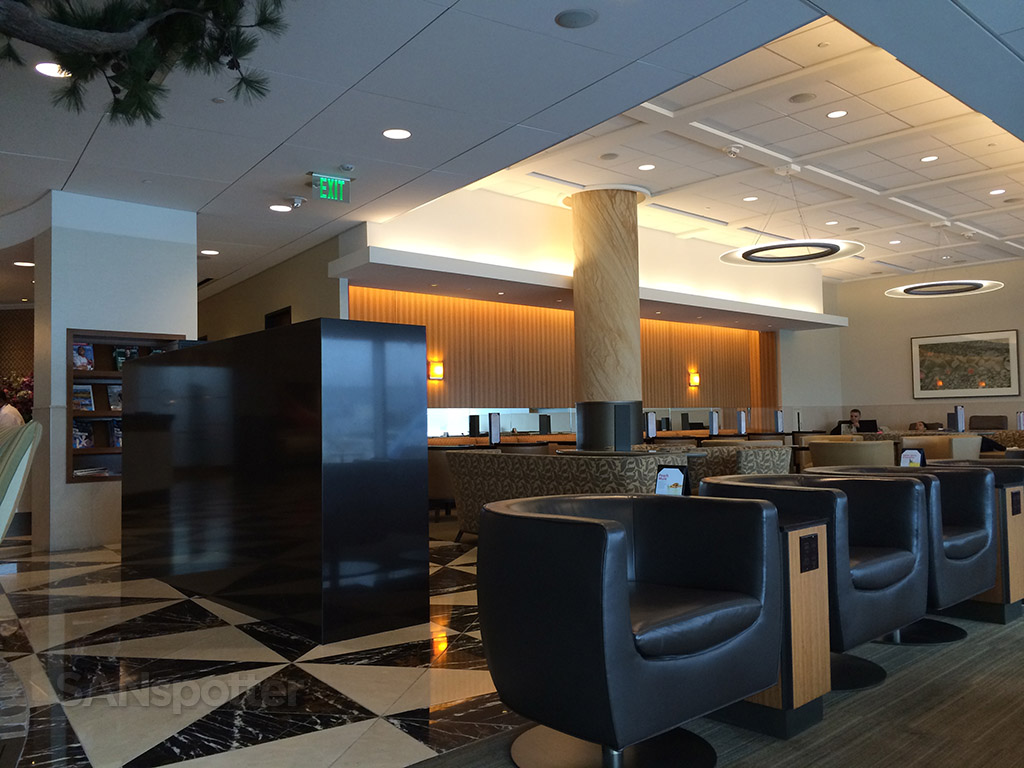 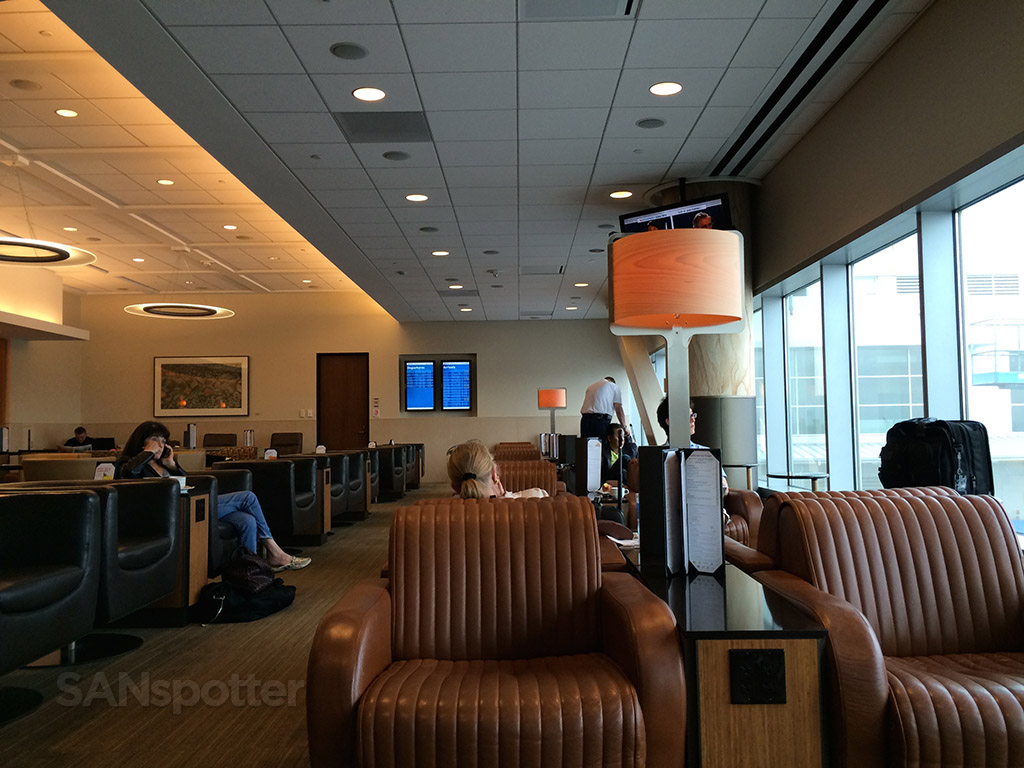 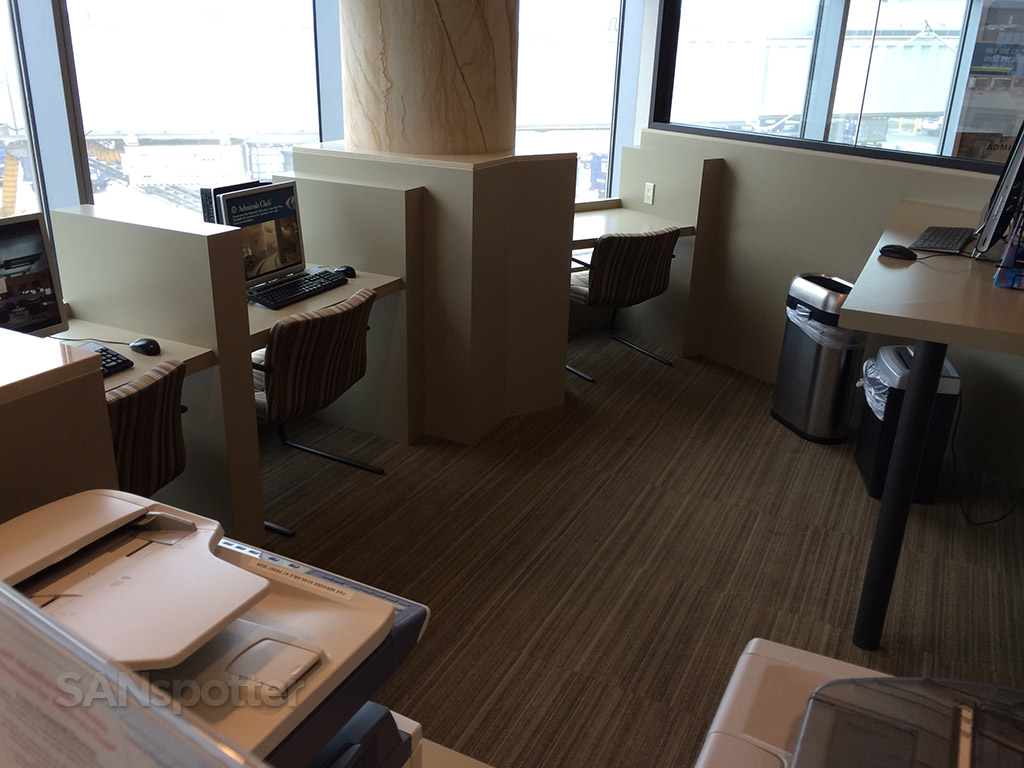 The business center in the lounge was bright, but a bit on the small side 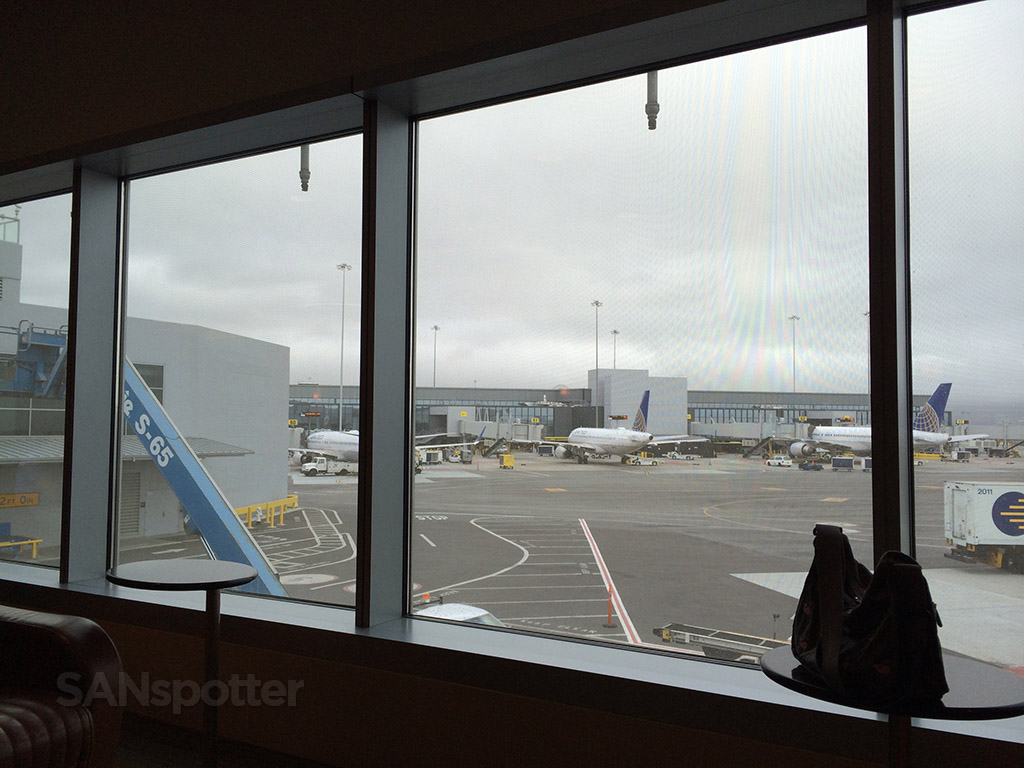 Too bad it was a gloomy day in San Francisco, because the view of the action outside was pretty good.

This was my first ever visit to an Admirals club, so I don’t really have much to compare it against. But now that I have access system-wide, I’ll be sure to try out some others in the near future to compare.