Now that I’ve had the chance to experience both the British Airways lounge at LHR, as well as the new United Club at SAN, I was really looking forward to seeing the United Club in San Francisco. Upon arrival at SFO, my wife and I excitedly made our way over to the international terminal to have a look.

The exterior looked grand and sophisticated, which only heightened our excitement. We were promptly checked in and we made our way down a small corridor and up an escalator to the main area.

In less than an instant, we were unimpressed. It was dark, gloomy, and not very cozy looking. Worst of all, the place was a zoo. It was packed to the gills, and we had to search high and low for somewhere to sit. We actually considered giving up and retreating back out to the main departure area instead.

We were a bit hungry however, so we grabbed a bagel and some juice. We eventually found a place to sit and ended up staying for about an hour and a half – mostly because other international flights were departing and many were leaving.

Slightly disappointing experience here, but that was overshadowed by the fact that we were about to experience ANA business class for the first time! 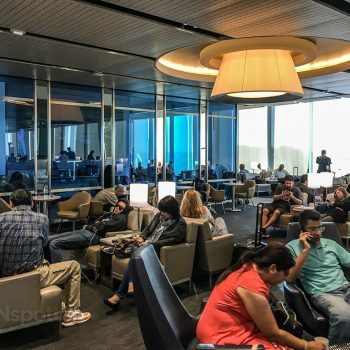 United Club, Terminal 7 LAX – I totally wasn’t prepared for this