Just like the last time I flew this route between Tokyo and Hiroshima, I was pretty exhausted with very little desire to take pictures for the sake of this blog. I usually feel pretty good by the time we land at Narita from the US, but the waiting around for our connecting flight to Hiroshima always drains me for some reason. I’m surprised I even remembered anything at all to write this out! So yeah – I apologize in advance for the lack of pics.

With the typhoon dumping buckets of rain over Narita, we were concerned that this flight down to HIJ would be delayed or canceled. Thankfully, during checkin they informed us that everything was still very much on time and on schedule. I don’t think that made me feel any better though – the thought of being whipped around from the wind and rain in a little CRJ-200 doesn’t rank high on my “things to do” list and all I could do was just take their word that everything was within limits. I just tried to put it out of my mind for the time being, but wow…the rain was really coming down outside.

Domestic ANA flights from NRT depart from a separate terminal (at ground level), and it’s essentially just one huge waiting room. All there is to do is sit until your flight number is called – and I think this is what drains me every single time. I’d much prefer to walk around and browse shops or something, but the only shop in this section of the terminal is a small convenience-type store which sells souvenirs and quick food items. Not much to look at, but my wife spent quite a bit of time browsing their sweets and chocolate selection.

Still pouring rain, our flight was called right on time and we were all herded out to board a bus which would take us to our aircraft parked at a remote stand. Did I ever mention that the CRJ-200 is my least favorite commercial aircraft of all time? Suffice to say, the dismal weather and fact that I was just about to board a tiny little CRJ was’t making me a happy guy.

We all managed to board the aircraft without getting too wet (much thanks to the bus driver who parked us really close to the boarding stairs), and from that point forward, that’s where things start getting fuzzy. I was dead tired and could barely keep my eyes open – let alone take any pics.

And that’s all the photos I took of this flight before I fell asleep. Sleep on a CRJ is never good – especially considering that Ibex doesn’t turn off the cabin lights during night flights. I’m not really sure if that’s an ANA/Ibex thing or if all Japanese airlines do it, but its highly annoying. Anyway, I slept as best I could, and I even woke up in Hiroshima with a fresh spot of drool on my shirt.

Just as the ANA ground agent handed us an umbrella upon deepening, I realized how good it was to be in Japan again. Service culture in this country is so refreshing compared to the US, and everyone I meet tries very hard to make me feel welcome. It’s one of the many reasons I like Japan, and it’ always good to arrive – typhoon or not. 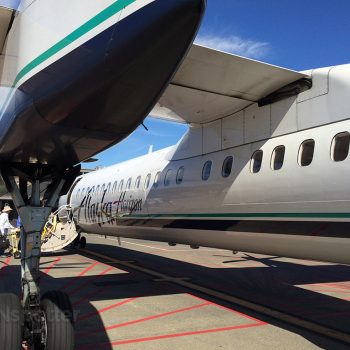