For those of you who don’t like to read, the TDLR of this article is as follows: COVID-19 has set me back a bit, but I’m still headed in the right direction. No, I’m not filthy rich, wildly successful, and stunningly good-looking yet. But I have reached a point where I know for a fact that I’ll never go back to the 9 to 5 corporate grind.

Being a full-time travel blogger hasn’t been pretty (nor graceful), but – I wouldn’t want to be doing anything else.

For those of you new to my blog, here’s a brief recap of how I got to where I am today. As much as I wish I could say that things have gone exactly to plan, I realize that would be boring. The content creator in me needs a little drama to spice things up every now and then, and thankfully – it’s been a little spicy:

Back in May 2018, the company that I was working for was asking for volunteers to be laid off. I had been writing sanspotter.com for nearly 5 years at that point, and I felt as if I was ready to make it my full-time job.

No, I wasn’t making any money with it yet. Yes, it scared the crap out of me to give up a big fat corporate salary. But I plowed forward anyway, full of child-like excitement and passion for what I was about to do.

Long story short, it’s been a tough road so far. Making money with a travel blog is an extremely difficult thing to do. However, by the end of 2019, I felt like I was starting to get things figured out.

I was seeing record blog traffic month after month. My YouTube channel was growing like gangbusters. Then, in March of this year, all of that came to a grinding halt thanks to COVID-19.

I’ll dive deeper into both of those things in a moment. But first, it’s time for an update of where things stand with the SANspotter brand.

Has COVID-19 squashed my plans to be a full-time travel blogger?

Yes and no. Technically, I spend more time working on SANspotter stuff so I do anything else, so I guess you could say it’s my full-time gig. However, it’s not my primary source of income right now (I have other projects which generate more revenue). Anyway, here’s a full breakdown of the situation:

Yes – it has squashed my plans slightly

Not only that, I’ve purposely made the decision to stay grounded out of respect for the safety of my family. The virus is still running rampant here in the United States, and me causally flying all over the country exposing myself to it (and bringing it back to the people closest to me) seems irresponsible.

I’ve even stopped posting to social media for the most part. I do post stuff occasionally, but it feels weird to be posting travel pics / content when I’m not traveling.

That being said, I want to fly. And depending on how bad my wanderlust gets, I might commit to doing a quick domestic trip followed by a self-imposed two-week quarantine after.

No – it’s still “full steam ahead” with this stupid travel blogger thing!

No, it’s not making very much money right now. I realize that my time is much better spent working on projects that will actually generate revenue, but that doesn’t stop me from banging out new content here on the blog at least once a week. It’s a labor of love at this point. I enjoy it too much to give it up completely, therefore, I’m not going anywhere and this SANspotter thing isn’t dead. Yet.

Remember in my last full-time travel blogging update where I told you that my traffic numbers had imploded due to COVID-19? Well, things haven’t improved much. People still aren’t searching for travel content on the Internet, and I’m not expecting that to change anytime soon.

I’ve spent more time working on sanspotter.com than any other project since 2013. Seriously. I’ve got more time and energy invested into this freaking blog then anything else. That’s why it feels like a dagger straight through my heart every time I look at the traffic numbers:

As you can see, traffic hasn’t recovered very much since March. I was hoping to see a brief recovery during the summer months when some people started traveling again, but it never happened.

The good news is that things seem to be moving along halfway decently even though I haven’t been posting any new airline reviews. It’s been a real struggle to come up with content ideas that don’t involve flying. I know that my subscribers want to see me fly, and I know very well that I want to fly – but it just isn’t possible right now.

The activity of my YouTube channel is encouraging. The summer months were rather slow as I was flailing around trying to think of content ideas, but I feel like I’m starting to gain some solid footing.

And just for the record, I have no plans of stopping the airline reviews. I will get back into it eventually (although probably not with the same frequency as before).

What are my plans for the next six months?

My hope is that I will have returned to the skies by the time I give my next update in six months. No, I don’t expect to be traveling extensively as I was in 2019, but I would like to hope that I’ll be doing occasional flights by then.

In the meantime, you’ll be seeing me experiment with different types of content and revenue streams here on the blog. The affiliate marketing thing has been working out pretty well. I might even launch the SANspotter merch line that I’ve been promising for years if I get desperate enough…

Thanks to everyone who continues to support me and all the content that I produce. Your support makes it far easier for me to fight through this downturn more than I ever could if I was going at it alone. You’re all awesome! 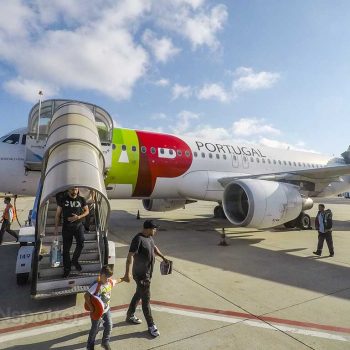 Do you have to go through customs for a connecting flight in Europe? It depends…