I’ll be the first to admit that my trip reports are about as far they could possibly be from being classified as “educational”, and I don’t think I’ve ever written an article here on sanspotter.com which would make someone instinctively reach for a notepad to scribble down valuable pieces of information as they read. It isn’t like I don’t have any desire to teach and inform or anything, but my writing style always gravitates towards making silly jokes about things like red shoes and Healthwhiches (leaving little mental energy left over to be serious and adult-like), and I just can’t help it.

But today is your lucky day my friends! Grab your notebook and something to write with, because this Austin to San Diego trip report contains a valuable life lesson which can potentially save you heaps of embarrassment and frustration as you arrive at the airport to check in for your flight.

25 minutes later, I was still waiting. I was seriously considering grabbing a taxi at that point, never even considering for a moment that I was actually in the right place and that the Frontier Airlines baggage drop was just 50 feet behind me. That’s right ladies and gentlemen – I had been given bogus information and I was about to be sent on a wild ride over to the South terminal (a place which just so happens to be nowhere near the North terminal – or even the airport for that matter). Heck, it might as well have been located across the state line in Louisiana, because once the shuttle bus did arrive to scoop me up, it was another long 25 minute ride over there.

Once we pulled up to what looked like a series of temporary buildings clustered together out in the middle of nowhere, it dawned on me that I had been led astray and that Frontier Airlines did indeed depart from the North terminal (where I had been dropped off originally). Dang it. Thankfully I have a habit of arriving at the airport stupidly early every time I fly, because I wasted an entire hour unnecessarily shuffling between terminals this morning. Even though I was in no danger of missing my flight, it was still rather embarrassing and not the best way to start a day of travel.

Once onboard with the boarding door closed, the possibility of having an open seat had been confirmed and I was enjoying sitting there with a little bit of extra room to spread out. Unfortunately, there was a small child sitting directly behind me, and you know how small kids are with their natural tendency to kick seats. I really thought that I was going to be in for a completely miserable flight, but thankfully the kicking stopped as we pushed off the gate and headed out towards the runway for departure. Disaster averted.

Just as I mentioned in my trip report about the flight to Austin several days ago, nothing is free on Frontier Airlines except for water in a plastic cup, so I took full advantage of that and sipped slowly on that chilly H2O all the way to San Diego. Hey – I’m an expert in milking free things for as long as possible, and I did a number on that cup of water this morning. It was an enjoyable refreshment lasting the entire 2 1/2 hours.

Also helping to pass the time on this flight was a bit of trip report writing and podcast listening (as usual). I didn’t even get up to use the lavatory once, and between all the writing, listening, and sipping, the flight went by in a flash.

And there you have it. We have reached the end of this Frontier Airlines trip report series, which ended up being a rather pleasant experience when I take a giant step back and reflect on it from afar. It was the first time that I had flown Frontier Airlines in years (the last time was back in June of 2015), and these two flights were painless and easy – so painless and easy in fact, that I’m actually looking forward to flying with Frontier again in the very near future if I can make it fit into my schedule.

The only real downside to flying Frontier instead of a large airline such as Delta (for example), is the fact that they are a smaller operation with a comparatively limited network. That’s perfectly ok if things are running as smooth as butter melting on a stack of hot pancakes, but throw in a thunderstorm or a naked guy running around on an active runway somewhere, and I can imagine things getting messy really fast. Larger airlines such as Delta and American can absorb these problems a lot easier thanks to having more aircraft and a larger network, but there is no way that Frontier can compete when things go bad. It’s just something to keep in mind you’re trying to figure out if it’s worth it to gamble on Frontier for your next trip…

Oh wait – was that another valuable life lesson worth jotting down? Holy crap – that’s two in one post and I hope you haven’t run out of paper! 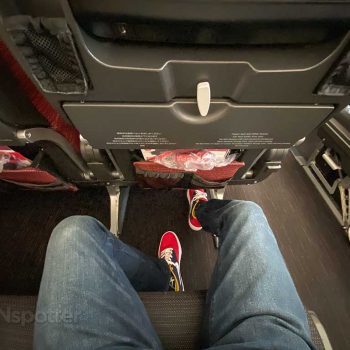 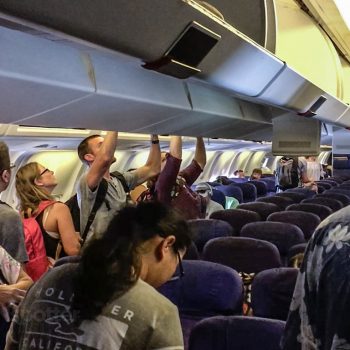