Remember when Delta used to fly L-1011’s, 777’s, and 767’s (both -300’s and -400’s) between ATL and MCO? I sure do. These days it’s pretty much all comparatively-boring narrow bodies doing these runs on a much more frequent basis, which I suppose is a good thing for the average traveller. Smaller airplanes take less time to load and unload, and who can argue with a greater frequency of flight options? I suppose I’m turning into a grumpy old #avgeek or something, because I don’t care about any of that nonsense. Bring back the heavy metal and make flying interesting again!

Despite the lack of wide body options for my flight down to MCO today, I had been looking forward to to this flight primarily due to the fact that at the time of booking, it was showing as an A321 – a brand new aircraft type to Delta’s already well-diverse fleet. But the scheduling gods had frowned upon me several days before departure, cruelly swapping that flight to a less-interesting 737-900 instead. Oh well. That’s just the way it goes sometimes. At least I got to keep the same seat I had reserved.

It had been a while since the last time I flew through ATL, and if there’s one thing about that place that I like, it’s consistency. ATL has remained exactly the same (pretty much) as it was ever since I started flying in the late 90’s, so there’s never a need for me to worry or get stressed flying in and out of this airport. I know it like the back of my hand, so it it was good to get reunited with it once again, if only briefly.

The boarding process was about as uneventful as you could imagine for a short 737 flight such as this, and I only say that because it took me about two minutes of thinking of something interesting to write before I finally gave in and decided that it was ok to tell it like it was.

Hey – there’s nothing exciting about getting on a 737 in terminal A at ATL. First class or not, this is about as dull as flying gets!

My mood started picking up once I got onboard and started to have a look around. This was my first time on a Delta 737-900, and I’m not going to lie – as much as I prefer larger (wide body) aircraft, this one was…really nice. I mean, like, really nice!

Compared to the old Delta domestic first class seats on the 767-300, this 739 was bright, comfortable, and very modern. And to top it off, it even had the “new plane smell”.

The Boeing Sky Interior is something I’ve always been quite fond of (how can anyone not like colored LED mood lighting?), and combined with the large personal video screens, I quickly started to forget all about my disappointment over modern-day 737 dominance.

Speaking of the personal video screen, the overall experience of using Delta Studio was much better than what I had just experienced in the 767. The screen was large, very bright, and best of all – it responded immediately to my touch (sounds dirty, right?).

I didn’t realize how bad the 767 system was until I started using this one. It was as smooth and responsive as any latest-generation smartphone, which was very unexpected and so refreshing. I guess all those years of bad touchscreen displays on airplanes have taught me not to set my expectations so high, so this was a nice (and very unexpected) little perk.

We pushed off the gate right on time, and took a runway 27R takeoff to the west. The only thing worth noting about the takeoff was the fact that we pretty much used all of the runway on our way out. Hot air temperature plus a heavy aircraft will tend to make that sort of thing happen I suppose.

The flight time down to Orlando was about an hour, and it wasn’t all that interesting given the fact that the weather was clear most of the way there and the inflight service was short and abbreviated with only a quick beverage service and some snacks from the snack basket.

FYI, they do serve full meals on flights longer than 2.5 hours. To see what that is like, do be sure to read my review of Delta 737-800 first class.

Things did get a bit more interesting as we approached MCO, however. The closer we got, the worse the weather looked. There was a lot of twisting and turning as we made our way down, so much so that I was starting to get disorientated and unclear as to which direction we were actually pointed. There was a lot of nasty weather out there to dodge, so props to the pilots for weeding us through that mess.

Arriving in a full downpour was interesting (and a bit butt-clenching), but thankfully the taxi to the gate was short and I was off and into the main terminal within minutes. And speaking of the main terminal at MCO: wow! This was my first time in this airport and I guess I was surprised at how chaotic and busy it was inside. Yikes! 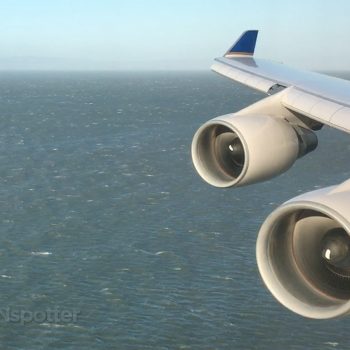 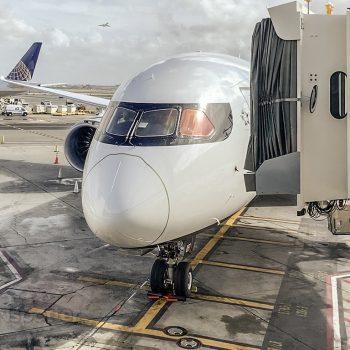