Ok, let’s hurry up and get this over with. Writing a review of Delta A321 economy class seemed like a good idea up until about a week ago, and I was actually looking forward to telling you how much I enjoyed the flight. I was even stuck in a middle seat too!

The problem is that I’m currently sitting at ICN ready to hop on a Delta A350 to DTW, and…well…writing about a lowly A321 doesn’t seem so exciting anymore. Especially since I’ve been flying some other really amazing airlines over the past 6 days as well. I wanna skip ahead and write about those flights, and it’s really hard to hold off on it because patience has never been my virtue.

Anyway, here’s the story of how I actually *enjoyed* being stuck in a middle economy class seat for 5 hours. As long as I forget about the A350 sitting right in front of me outside the window, I just might be able to pull this off…

I know. That’s a bold statement considering I’m currently nose to nose with a Delta A350 here at gate 253 at ICN, but hear me out on this. Delta is a fantastically good domestic US airline. They cover every corner of this country better than any other airline does, and they manage to do it in a professionally consistently way. Clean planes, happy crews, incredible IRROPS performance…I could go on an on about how much I approve of the way they run their operation.

Delta began flying the A321 in early 2016, and while skeptical at first, I quickly realized how much of a game changer this airplane was. I hated the fact that it was purchased to be a 757 replacement (my favorite aircraft of all time), but my mind was put at ease once I got a taste of it on a flight from MCO to ATL in July 2016.

The fact that I was seated in first class probably helped to make me feel more excited about it, but I found it to be impressive overall.

Delta views the A321 as the aircraft which will eventually become the backbone of the fleet, and with the way they’ve configured it (generous leg room in economy, huge seat back video screens, and beautiful mood lighting) it’s exciting to think that this same experience will be available to a majority of domestic US Delta destinations over time. It’s a “right sized” airplane (not too big or small) that can fill a variety of roles comfortably and efficiently.

Even though it might not look as cool as their flagship A350, the comfort and flexibility of the A321 (especially the way they’ve configured it) is going to be a huge hit for both Delta management and the flying public.

By the way, first class on the Delta A321 is very nice, but today, I’m going to show you what economy class is like.

I’m totally out of my element on these annual Christmas trips to visit family. Not only do I have a travel companion (my wife is not a fan of travel – that’s why I usually travel solo), we bring along two large suitcases stuffed full of Christmas gifts for the family. And sometimes, depending on the aircraft we fly on, I end up in the middle seat. She’s an aisle seat person through and through, so I’ve got no choice in the matter but to take the middle like a good husband should.

Christmas is all about family though, so I’m not one to complain about taking one (or two, or even three) for the team if it means keeping others happy. Besides – how often do I get to write about my experiences from the middle seat? From a trip reporting point of view, situations like that have the potential to be highly lucrative trip report fodder.

As mentioned earlier, Delta has configured their A321 economy class in a quite comfortable manner. Leg room (seat pitch) is generous, seat width is decent, and the large seat back video screen in your face is just the distraction you need to take your mind off the fact that you’re going to be stuck in a middle seat for the next 5 hours. It’s better than Delta 737-800 economy class, that’s for darn sure.

It should be noted that the leg room (seat pitch) here in economy on the Delta A321 isn’t generous enough to be able to squeeze by your seat mate without being incredibly awkward (and borderline assaulting).

It helps if that other person is family, because you’re gonna have to climb all over them if they refuse to stand up. The annoyed look on my wife’s face as I stepped on her toes and crushed her arms trying to get out tends to make me think that the leg room isn’t as generous as it could be on this airplane.

The bottom line is that the Delta A321 is a relatively comfortable place to be for longer flights such as this (even in economy). It’s not anything I’d call luxurious, but it’s far better than what other US airlines are doing (specifically compared to economy class on the United Airlines A320).

What kind of food were they slingin’ on this flight?

If you’ve caught my two most recent reviews (SAN-ATL and PBI-ATL), you shouldn’t be shocked to know that the service was exactly the same on this flight. As usual, Delta was offering free snacks to everyone here in economy, as well as an assortment of items for purchase from the menu. Also as usual, I couldn’t resist overpaying for a small fistful of something. Anything.

My vile hatred of mayonnaise was revealed to the world in my recent video review of Alaska Airlines A319 first class, so therefore, it should be of no shock to know that I was mortified to discover a blob of the white gunk smothered all over the $9 sandwich I purchased.

My vile hatred of mayo runs so deep that I actually considered not eating that sandwich. Thankfully my wife was there to give me a stern look of “you better eat that thing – or else”, and I sat there in silence for the next 25 minutes pouting like a 5 year old trying to think of anything but mayonnaise with each and every bite.

Is there anything Delta could do to make A321 economy a more enjoyable experience?

Well, they could start by not smothering their $9 sandwiches with mayo. Is anyone at Delta listening? For the record, I’m not a picky eater or anything – as a matter of fact I’ll eat most anything that is put in front of me (just as long as it isn’t mayo). Who wants to start a petition with me to have the stuff banned form existence?

As as far as non-petty suggestions for improvements go (lol), the Delta A321 economy product is so good that there isn’t much to complain about other than personal preferences (which others may not agree with). It’s basically as good as Delta 767-4oo economy.

For me, I don’t care for the mid-cabin lavatory so much. By the middle of the flight, there were many people hovering around in the aisles waiting their turn to use it. It was distracting to have people constantly walking back and forth past our row.

The queueing problem might be less of an issue on shorter flights where there are less people using the lavatory, but it’s definitely an issue on longer segments such as ATL-SAN – which just so happened to be pushing 5 hours (including taxi time) on this particular day.

While I’m still not very accepting of the fact that the A321 is the replacement for my beloved 757, Delta is doing it right by configuring these birds in an extremely comfortable (and efficient) way. Being able to enjoy 5 hours in a middle seat says a lot about how much I enjoy these 757 murderers, and I’m looking forward to many years of flying them all over the vast Delta network.

Ok, how was that? Good enough? It better be, because this was an extremely hard post to write considering I’ve got nothing but A350’s (and other neat flight experiences) on my mind. The fun begins next week with a full review of QANTAS 787-9 premium economy from San Francisco to Melbourne! 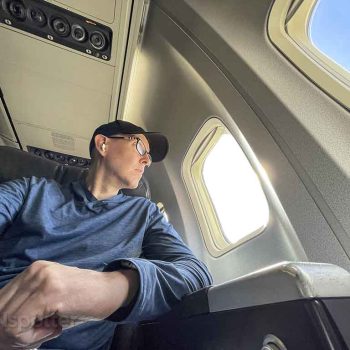 United 737-900/ER first class: a throwback to a different era in air travel