I know. I’m always late to the game, and this Cathay Pacific business class review is something that I should’ve done years ago.

Anyway, for those that don’t know, Cathay Pacific operates one flight a day between New York and Vancouver. However, you gotta hurry if you want to try it for yourself because it’s coming to an abrupt end next spring.

Can you believe that I successfully managed to put together a Cathay Pacific business class review video that came in less than 14 minutes?

Depending on who you ask, this is easily one of the best airlines in the world. Surely I’d be able to put together a 3-hour documentary of my experience, right? Yeah, I could have. But I also know that more than 14 minutes of SANspotter content (in one sitting) is a bit too much to handle for most people.

Thanks as always to Epidemic Sound for the soundtrack. They always come through for me, and it’s always fun browsing their catalog of music whenever I start putting together a new video.

Can I just say how nice Terminal 8 is here at JFK? This is the first time I’ve ever been in here, and it was so nice that it was also the first time I’ve *ever* had to tell myself to chill out on getting pics and video footage even before clearing security.

Terminal 8 is nice. So much so that I think I shot like 10 gigabytes of pics and video of the ticketing hall alone! And since this is supposed to be a Cathay Pacific business class review (and not a silly review of T8), I’ll spare you the agony of scrolling through an endless stream of pics showing every little detail. Time to move on…

What lounge does Cathay Pacific business class passengers have access to here at JFK?

One of the perks of being a Cathay Pacific business class passenger here at JFK is getting full access to the American Airlines Flagship Lounge.

I’d have to say that I quite liked the Flagship lounge. It was a bit small though, and I had to keep moving around trying to find a quiet spot to get some work done. The food was good, plentiful, and I left feeling fat. All of the most important qualities of an airline lounge experience, right?

Anyway, I’ll write a full summary of this lounge later, but for now, let’s press on with this Cathay Pacific business class review.

The boarding process for Cathay Pacific 865 to Vancouver

This is it! My first ever Cathay Pacific experience is just moments away. Can you believe it’s taken me this long to fly what is arguably one of the best airlines in the world? I’m so ready for this.

FYI, it seems that gate 47 is the only one in all of Terminal 8 where there are no views of the aircraft parked outside. I couldn’t even a see a winglet.

Seat 18K is the one I chose for this flight over to Vancouver tonight, and from what I could tell it looked to be a fine choice.

Since there aren’t many other situations in life where I’m gonna get treated this well, it felt awfully special pulling stuff out of that little amenity kit as we waited to push off the gate.

And yes, we got hot towels too. I think that I need to fly business class more often.

So what’s the verdict so far? To be honest, nothing has stood out to me as being especially remarkable, though it indeed felt like a legitimate long haul business class experience so far.

It was a relatively uneventful takeoff out of JFK this evening, but I do recommend checking out my video of this flight if you want to hear those big GE90’s propel us west out of New York.

Being a relatively short five and a half hour flight over to Vancouver this evening, the cabin crew started the service within minutes of our departure. Here are some of the highlights:

The entertainment system was a little slow, but the movie catalog was seriously impressive. There was so much that I wanted to watch, which hardly ever happens on an airplane. I usually end up watching movies or TV shows I don’t have much interest in to begin with, and I can’t stay focused.

You know, I’ve seen enough QFS Aviation videos to know that Cathay Pacific is a little better than the rest when it comes to the little details. That still didn’t prepare me for feeling as cheerfully amused as I did by this menu (which resembled a newspaper).

This was phenomenal by the way, and every part of it (even the bread) was prepared to absolute perfection.

Again, this was cooked and prepared to absolute perfection – to the point where I actually think that this meal was *better* than what I was served in Qatar Airways business class earlier this year.

After dinner: rest and relaxation (while feeling fat)

You know how I’m always trying to make my loo reviews exciting? And what usually happens is that it’s usually the stupidest part of the entire review? Well my friends, this time it’s different. Why? Check this out:

Remember what I said earlier about something embarrassing happening with the mattress and duvet? Well, I’m an idiot and I didn’t realize at the time which was which, and I proceeded to use the mattress as my blanket.

At the very least, all I can hope for is that I gave the flight attendants a funny story to tell. And, who’s to say that they weren’t hovering over me giggling and taking pics while I was sleeping? I guess I’ll never know. Unless I show up all over Instagram as part of a silly “Cathay Business Class review” meme or something.

The descent into YVR (and final thoughts)

We began the descent into Vancouver just shortly before 11pm local time, and I’m happy to report that I had A pretty good nap in these lie flat seats. I dreamt about Vicarious Voyager and Kochan (as usual) and I know that you would too if you were as big of a fan of their content as I am.

As you might expect with a flight time of only 5 and a half hours, it felt much shorter than that thanks to the comfy seat and all that good food earlier on.

However, the cabin crew was just so so in my opinion. Of course they were nice, but at no point did I feel as spoiled as I did in, say, Qatar Airways business class. That’s not to that I was disappointed or anything.

As a matter of fact, this business class experience was right on par with what I was expecting, primarily since I’ve been hearing so many mixed reviews about Cathay Pacific lately. It was good. Not great, but…good.

In comparison, I found this service to be slightly better than my Philippine Airlines 777-300ER business class experience between Vancouver and New York last fall. That was another 5th freedom route between these two city pairs that recently ended, and I’m happy that I got to experience it while I could. The same can be said for this CX flight, since it is scheduled to end next spring (after nearly 20 years of service).

I hope this Cathay Pacific business class review was helpful! Although this particular route won’t be flown for very much longer, this should give you a pretty good idea what to expect on long haul routes to and from Hong Kong.

If you have the time however, I’d highly recommend heading over to the American Airlines website and scooping up one of those 35,000 mile JFK-YVR Cathay Pacific business class awards while you still can. It’s easily one of the best premium travel bargains out there at the moment IMHO. 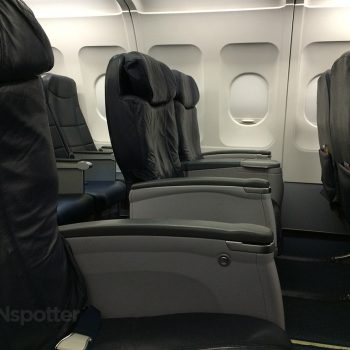