I know. Normally I’m the king of organization and I post all my trip reports in the order in which I flew them. However, things were kind of busy last summer and I sort of fell behind on my writing schedule a bit. Ok, I will admit that I was feeling slightly lazy as well, but I was mostly busy. I promise. Anyway, this post represents the Avianca review I should’ve written four months ago.

FYI, I’m going to do things slight differently this time. As an experiment, I’m going to use the script from the video as the base for this written review. Then I’ll mix pictures into it as I normally do. I’m getting the sense that nobody reads the entire article anyway, and it’s the pics (and captions) that tell the story. So…why waste time writing an entire article when I already wrote the script for the video months ago? Slowly but surely, I’m learning to work smarter (not harder)…

If you’re a regular consumer of my content, you probably watched this particular Avianca review on my YouTube channel months ago. However, it didn’t get as many views as most of my other videos usually do, so I know there are some of you who are seeing this content for the very first time.

Video reviews are a higher priority for me these days, but even I will admit the time between the publishing of that video and this written review was a bit too long. Shame on me.

The music for this video, of course, came from my good buds over at Epidemic Sound. Do consider subscribing to their service if you need really good music for your own videos!

Arriving at EZE for my first ever Avianca review

I made it to the airport with plenty of time to spare before my 5 and a half hour flight up to Bogota on an Avianca A330, and I was feeling pretty good about it. I was a little sleepy still, but…otherwise good.

Terminal A here in Buenos Aries isn’t all that interesting if I’m being honest. It’s certainly nice…but it’s very basic with limited views to the outside. Oh – and to the cashier of the Havana Coffee shop located adjacent to gate 5 who rang up my breakfast that morning: you are the meanest cashier I’ve ever met. Just sayin’.

The old livery on the plane flying me up to Bogota this morning is one of my favorites for sure (and I’m glad it was the one that ended up in this Avianca review), but unfortunately the pic above was the best view of it could get from inside the terminal. Oh well. I was still too flustered about my encounter the meanest cashier lady on planet earth 10 minutes ago to really care.

Just as it was for the boarding process for my Latam flight from Santiago to Buenos Aires two days ago, exactly nobody rushed the gate until it was their turn to do so. It was freaking awesome.

Avianca A330-200 economy class is configured in a typical 2-4-2 layout. I had an aisle seat in the center section for today’s flight up to Bogota, which as you will soon see, was chosen for a *very* specific reason.

Is there not a better feeling in the world than knowing that you’re just minutes away from flying thousands of miles away from the meanest Havana Coffee shop person you’ve ever met? I’ve never been more ready to fly in my life.

You’re probably dying to know why I chose this particular seat. Well, to be honest, at this point, I still wasn’t sure if I made the right choice. Just a few more minutes to go, and I’ll know…

I may not have any wing footage in this Avianca review to show you, but I can promise you that I’m feeling like a king here in seat 12D all by my lonesome self.

Wanna know who else likes moving maps? My Patrons, of course! All of the guys listed below love airlines and travel just as much as I do, so I’d highly recommend checking out their content:

What is the breakfast service like in Avianca economy class?

I guess the nice thing about suffering through one traumatic breakfast experience so far this morning meant that I was ready for anything at this point. Clumpy eggs? over cooked potatoes? grumpy flight attendants? bring it.

Should I be worried that I’ve never once heard anyone say amazing things about the food in any other Avianca review I’ve ever seen? Maybe not, considering that I’ve never heard of anyone ending up in the hospital from eating the stuff either.

Despite being one of the blandest looking plate of eggs I’ve ever had the pleasure of sitting in front of, it was surprisingly decent. Although, I’m guessing that the fact that it wasn’t served with a heaping pile of attitude as well had a lot to do with it. If I had to rate this meal, I’d say: 3 and half stars out of 5.

After breakfast (and before settling down to catch on some sleep), I made a quick trip to the loo. One of these days I’m going to experience an economy class lavatory that impresses me. Today wasn’t that day.

Relaxing (and trying to sleep) in Avianca economy class

There’s a little over an hour to go at this point, and…I’m not exactly sure what I was hoping for by checking my watch every 5 minutes. Other than massive progress of course.

Making time go by even slower was watching our pixel-by-pixel progress on the moving map. Are we there yet?

Final thoughts about my first ever Avianca experience

So that pretty much wraps up my first ever Avianca review! My entire experience was ok I guess, with mediocre food, a decent seat, and most importantly…a cabin crew a million times more friendly than a certain Havana Coffee employee back at EZE.

If I’m being honest, up until this point, the first thing I thought of when hearing someone say “Avianca” was the crash of flight 52 way back in 1990. For some reason or another, that incident really stuck with me and I’ve never been able to shake it.

Thankfully, being able to experience Avianca for myself absolutely helped to reset my thoughts and my mind doesn’t immediately got to such dark places anymore. How so? Well, it’s been four months since this flight, and I hadn’t even thought of that incident until writing about it just now. For a negative Nancy such as myself, that’s huge.

By the way, having an empty seat next to me on this flight made all the difference, and…if you’re curious how I’ve been able to make that happen so many times over the past several years, I recently wrote an entire article about it that I recommend reading. It’s stuffed full of good tips, tips, and techniques that’ll make *any* introverted Flyer weak in the knees with excitement. 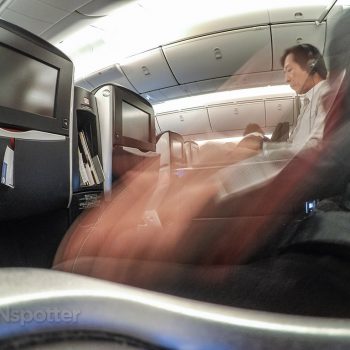 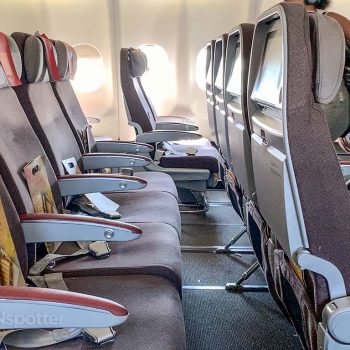