I’m not a big fan of super early flights, but going to the east coast sort of requires it if you want to arrive at a decent hour. I dislike arriving at my destination very late even more than I do an early departure, so that pretty much explains why I chose this 6:30am departure to LAX this morning. Oh well – it’s better than arriving into JFK around midnight especially since this was to be a quick turn and I would be coming home the next day.

The taxi picked me up promptly at 4:30am, and to be honest I wasn’t quite prepared for a super-chatty cab driver this morning. He was as chipper and talkative as could be, and it was difficult for me to keep up as I was struggling to get my body going at that early hour. He was really cool though – and kind of interesting as well so he was fun to chat with as we made our way down to SAN.

Security lines weren’t very long, but it did take me about 15 minutes to get through and into the main terminal. From there, I pretty much followed my usual routine for early morning flights out of SAN, which mainly consisted of wandering around taking long-exposure pics of aircraft parked at the gate. I got a few decent shots, but not many.

Oddly enough, my flight up to LAX wasn’t even listed on the flight information boards. I just had to trust that the information on my mobile boarding pass was correct – luckily it was.

Boarding was right on schedule, and I ended up being the third person to board. I found it surprising that there weren’t many other passengers rushing the gate as soon as they called for first class, but later I found out that there were many others that hadn’t even arrived at the gate yet.

They actually delayed the departure time by a few minutes to wait for more passengers to arrive. Normally I’d find that annoying, but there are only a few days left before Christmas so I’m sure they need to get people where they are going to avoid more problems down the line.

This flight to LAX this morning was my second ever time on an ERJ-175, and as a matter of fact, I had the exact same seat as the last time (3A). Suffice to say, it didn’t feel any different – not that I was expecting it to, of course. American Eagle configures thier ERJ-175’s just as United Express does, meaning that the first class cabin is a 1-2 layout – with the single row being the most private (of course).

The flight attendant did a good job of keeping drink orders filled while we were still on the ground during the short delay, and she was also quick to serve more as soon as we were in the air. I passed on refreshments this morning, but I did find it interesting that she didn’t have a snack basket to offer to any of the other passengers. This was a short 25 minute flight though – so I could certainly understand the lack of snacks.

The approach into LAX was simply amazing this morning, with the rising sun illuminating a very thin layer of fog hovering off the ground.

We touched down on runway 25L just a few minutes behind schedule, and unfortunately there was an aircraft occupying our gate which meant we had to sit and wait for about 20 minutes before they could fit us in. That wasn’t a big deal to me since I had a three hour layover, but I did feel bad for some of the other passengers who had really tight connections.

Anyway – we got a nice ground tour of LAX that morning as ground control moved us around and away from other aircraft. At least there was a lot of interesting things to look at as we rolled around!

This was my first time arriving at the new American Eagle terminal on the eastern side of the airport. It was decently nice as far as commuter terminals go, but I didn’t spend much time there before jumping on a shuttle bus to terminal 4 to catch my flight to JFK. 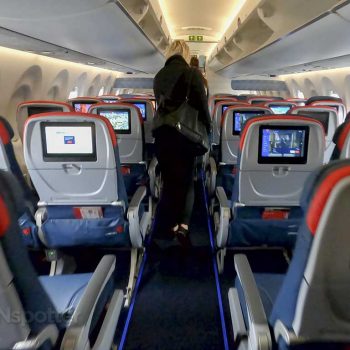