First of all, I can’t freaking believe that it’s been six months already. It seems just like yesterday that I wrote that post announcing my departure from my corporate desk job with a butt-puckering transition to full time blogging, and the realization that it was a half a year ago is giving me the willies. I thought for sure that time was going to slow down substantially once I left the stressful demands of the corporate life, but I’m glancing at the calendar right now with a look of absolute horror on my face. Where the heck does time go?

The scariest part of this is that I’m not anywhere near where I thought I’d be by this point. That’s not necessarily a bad thing, as there have been a handful of good things that have happened in that time which I never could have predicted six months ago. But it’s those unrelated opportunities which have derailed my blogging plans a bit, and I’m not happy about that because making a living travel blogging (or at least living off the SANspotter brand) is my ultimate goal and I’d be feeling better if I was giving that all of my attention right now.

The best way to summarize the last six months is to list out all of the things I’ve learned while trying to make the full time transition to travel blogging. It’s been nowhere near as sexy as it thought it was going to be, and there isn’t a day that goes by where I think that I’m never going to make it and that I need to give it up and get back to a “safe” 9-5 lifestyle. Going out on my own is not doing good things for my self esteem, that’s for dang sure.

1. There’s actually no such thing as “full time” travel blogging

Seriously. It just doesn’t exist. Making a living writing blog posts (and nothing else) is so 2005, and it’s just not a realistic goal for mere mortals like me anymore. Sure, there are a few mega-popular bloggers who are raking in the big bucks by simply spitting out a blog post every day, but the only reason they can do that is because of their massive audience – which translates to hundreds of thousands of page views a month (which advertisers love). How am I ever going to be able to build that kind of following writing about United Airlines 737 economy class?

Because it’s so difficult to build a massive audience, most travel bloggers need to focus on other things which can actually generate revenue (freelance writing, public speaking, consulting, etc). The blog is essentially demoted to a marketing tool at that point, and not the primary focus of thier business whether they like to think it is or not.

Unfortunately, I’ve been finding myself going down that same road, and its exactly why I’ve not been posting here on sanspotter.com as much as I would like. I’ve been too busy working on projects that actually generate income and It’s killing me because all I want to do is focus on this blog and keep it growing at a fast and furious pace. It’s been anything but that.

2. I’m a terrible salesman, and it’s holding me back

Did you know that I actually wrote a book? It was something I was extremely proud of when I published it last January, as I’ve never written a book before and I was so excited to share it with the world. But then, less than a week after launching it and making a few references to it in a few of my posts, something weird happened. I felt really dirty for pushing it on my readers, and it was really uncomfortable stepping out of my comfort zone and asking my readers spend their hard earned money on my stupid book.

I really hate pushy sales pitches (especially when it’s unrelated to the context in which it’s brought up), so that’s why you haven’t seen me mention it all. However, I know that I’m being slightly obtuse about it because I wrote it with the SANspotter audience in mind and I really think it would be entertaining and helpful to a lot of you. If I’m ever going to make it as a successful travel and airline blogger, I need to gain the confidence to promote stuff like this. Speaking of which, why haven’t you purchased one of my social media image packs yet? 😉

3. I’m having mega difficulty trying to figure out what I should be focusing on

When I left my full time day job to begin this full time blogging journey, this blog was my primary focus – although I also had my YouTube channel and aircraft illustration blog (which were both nothing but side projects). The problem is that now that I no longer have a full time day job to suck up all my focus, I’ve been giving all three projects equal amounts of time. And guess what? They are all growing because of it. Yay, right?

Not so fast, buckaroo. Yes, I’m seeing positive growth on all three, but it’s only this blog which still isn’t generating any revenue yet. My YouTube channel isn’t generating much, but there is a bit of money coming in and every month is better than the last so it’s definitely headed in the right direction. It’s my illustration work (mostly contract jobs) which is bringing in the bulk of my revenue right now.

I need money to pay the bills every month, so what do I do? My heart tells me to have faith in sanspotter.com and keep grinding on it in hopes of hitting it big eventually, but it’s really the YouTube channel and the illustration work that are the proven sources of (growing) income. As you can guess, it’s been difficult to focus on just one of these because they all have value in one form or another. And since I’m working on all three, I can’t focus 100% of my time and energy on one (which most business gurus say is critical when trying to scale). See the problem here?

4. Writing is extremely time consuming – and it’s only become worse since it’s “full time” now and I feel like everything has to be *perfect*

Did you know that one of my typical airline reviews (such as the Austrian Airlines business class review) takes approximately 12 hours to put together? Not only that, it requires a ton of mental energy which leaves me feeling like a blob of peanut butter once I decide it’s good enough to smash the “publish” button. That’s a lot of time an effort for an activity which isn’t generating revenue, and the unfortunate reality is that it’s a lot of time that can be used to focus on more productive things.

I guess what I’m to say is that writing doesn’t come as easy to me as it does to others (or so it seems). For example, Ben writes 6-8 posts for onemileatatime every freaking day and he’s been doing it for years. How does he do that?? Even if this blog was my only project, I’d have a really hard time writing one post every day – let alone 6. Somebody give that man a medal, because I can’t compete.

The big question is: how do I translate the things I’ve learned into positive action?

Blog growth and monetization is a huge priority – plain and simple. But my YouTube channel is also a key part of the SANspotter brand, and seeing positive things happening with my video content makes me feel less concerned about not having enough time to write. However, I can do better treating this blog more like a business rather than a hobby (for example, creating more helpful content) and that’s what is going to be needed to get to the next level. More airline reviews, less hotel / lounge reviews, and generally more helpful airline-related content (tutorials and such).

Anyway, there was no real purpose to this post other than to publicly answer all the “howz it goin’?” questions I’ve been getting lately. I think the fact that I’m not dead in a ditch somewhere is enough to give me hope that there’s still a chance for this blog to succeed, and that I just might be on the right track (even though it doesn’t feel like it most days).

And now, if you’ll excuse me, I’ve got to get busy because I sure as heck want to give you all a much more exciting update for the 1-year anniversary update next May… 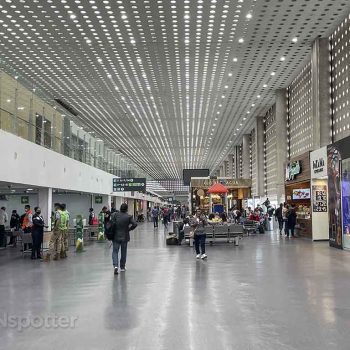