Home
|
Travel Discussion
|
How to use Uber at the San Diego Airport (caution: it’s a bit different)

Being that my home airport is SAN, one of the most common questions I get from people flying in is “how do I get an Uber at San Diego Airport?” The good news is that it’s extremely easy – as a matter fact, it’s much easier now that was just a month ago.

How Uber used to work at SAN

Those of you who have tried to hail an Uber here at SAN before November 2019 will remember exactly how painful of an experience it was. While it was quite convenient to have a designated Uber pick up locations at both Terminal 1 and Terminal 2, it was essentially a free-for-all due to the limited space designated for rideshare pick ups.

Finding your driver during peak times was an exercise in futility and usually ended up leaving both the passengers and drivers extremely frustrated. It was especially annoying after arriving on a long flights from, say, Tokyo or Zurich and then having to deal with the nonsense of finding my ride in a sea of other cars (and people).

Thankfully, this is no longer the situation and the process of getting an Uber at the San Diego airport has just been streamlined. Some may say that it has been “enhanced”, while others will argue that it’s worse than it was before. Let me explain…

Getting to and from the San Diego Airport using Uber is two completely different experiences. Getting to the airport is the easy part. It’s the process of hailing an Uber which is a bit more complicated. But as I said, it’s a lot easier now than it used to be:

All Uber drivers are allowed to drop off riders on the main departures level with other traffic. There is no designated drop off area for Uber when arriving at the airport. Simply tell the driver which airline or terminal you’re departing from, and they will drop you off right at the main entrance closest to your airline.

Proceed to the rideshare pick up location located on the ground level directly across from the terminal. Note that this applies for both terminals (1 and 2). 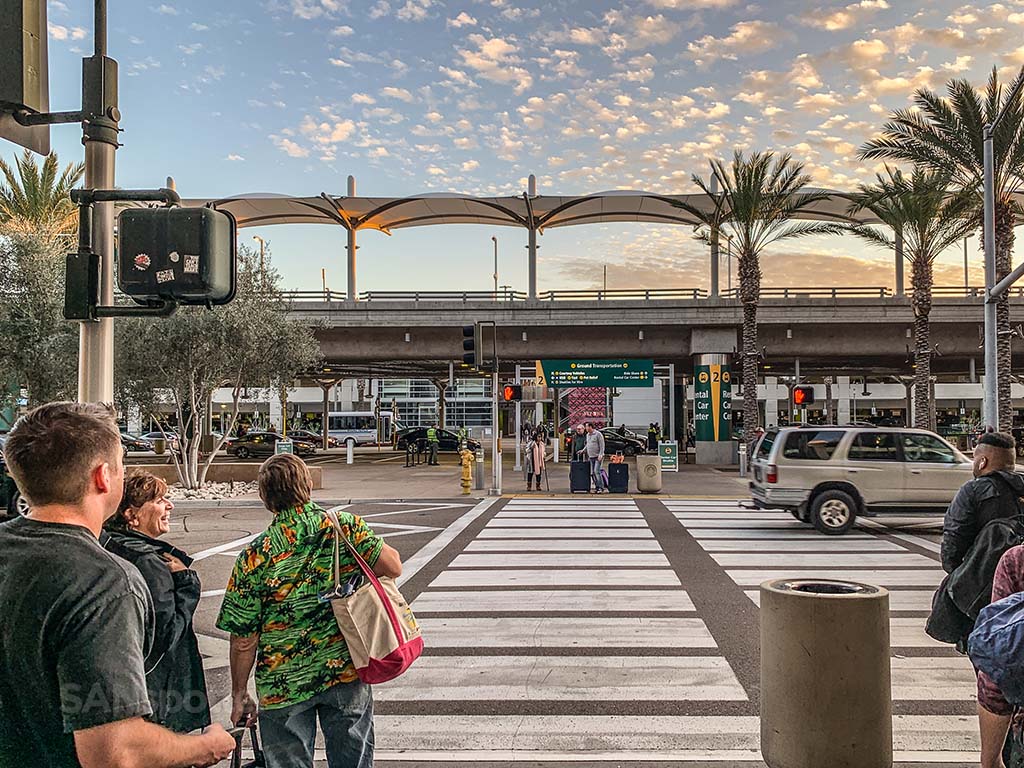 Arrivals level, Terminal 2. Why is everyone in this pic really happy? Because getting an Uber at SAN is extremely organized and easy. 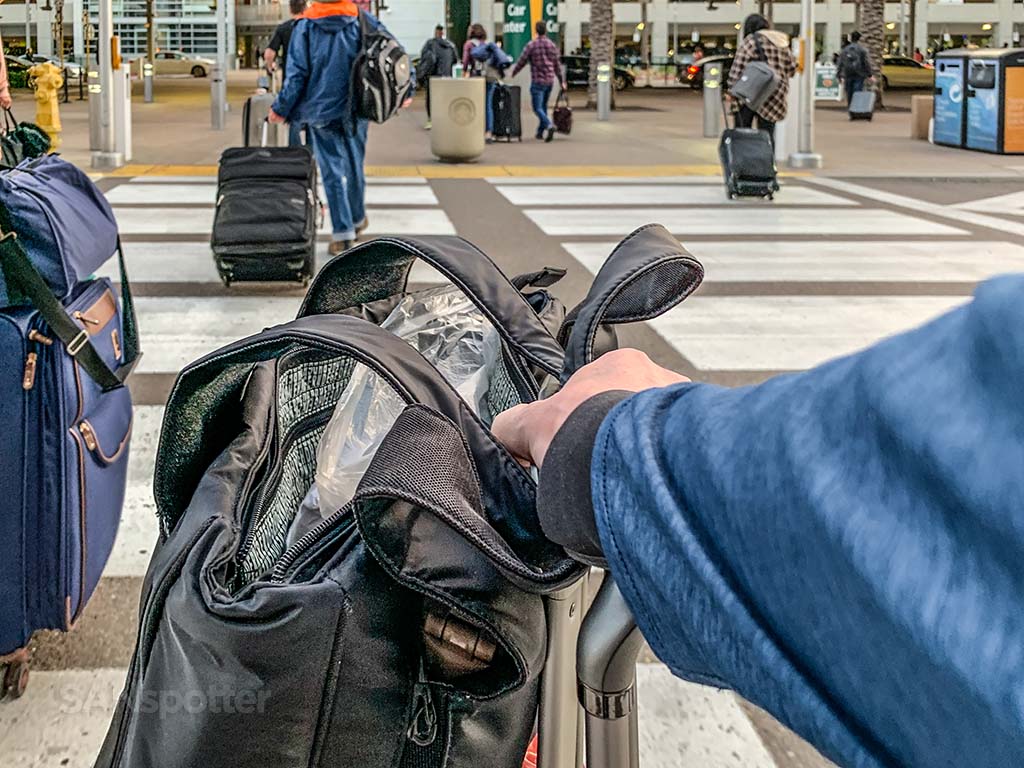 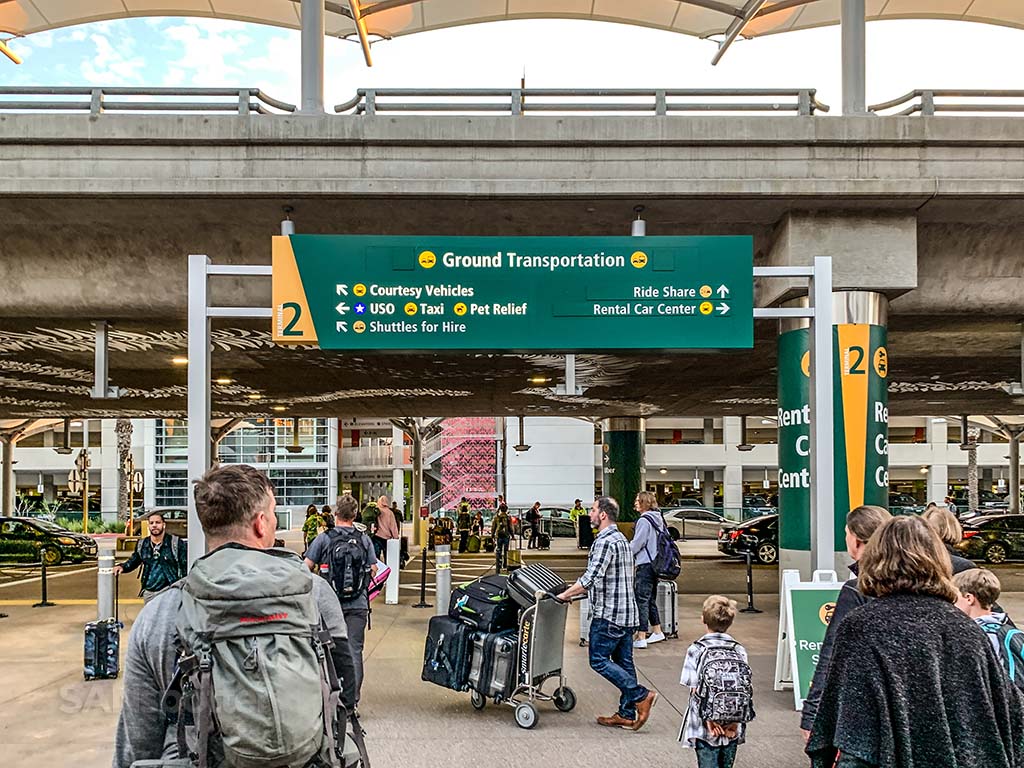 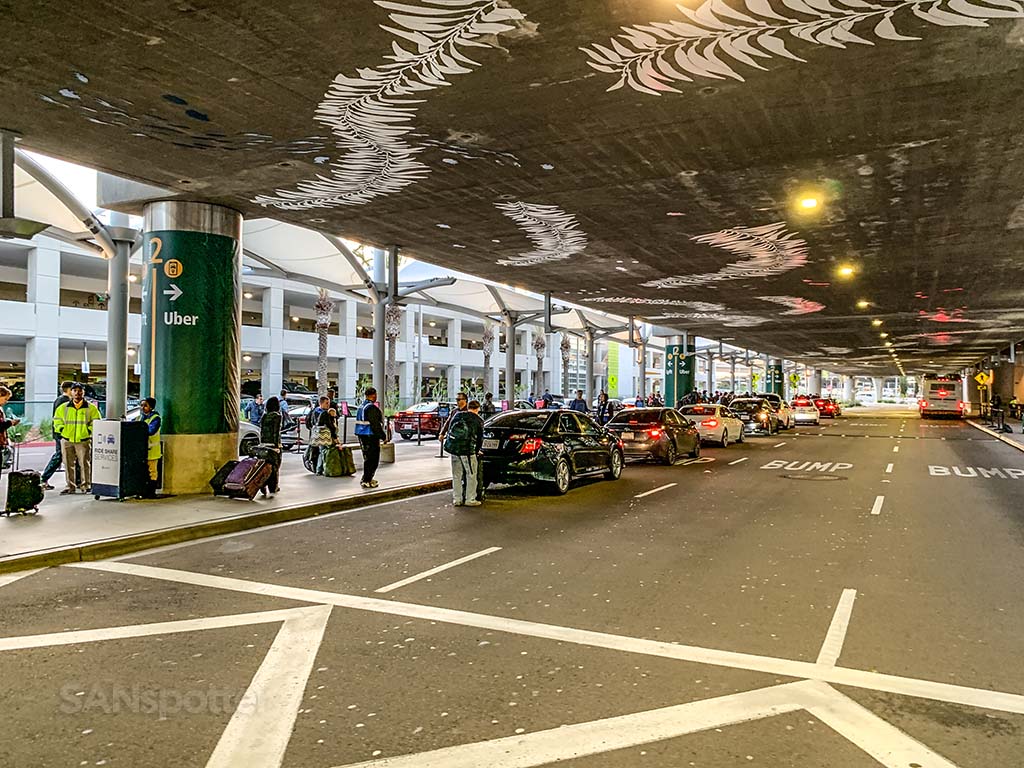 You’ve arrived! Welcome to the home of Uber at SAN.

Note that with the new set up here at SAN, it’s no longer necessary to initiate a ride from the app while you’re still in the terminal gathering your luggage off the carousel. You won’t be saving any time by doing this, and you’ll understand why in a moment…

Once you’ve arrived at the Uber pick up location, use the app to initiate a ride just as you normally would. However, note that this is where Uber at San Diego Airport gets a little bit different. You see, instead of the app pairing you up with a specific driver who then needs to drive to your exact location, you are given a six-digit PIN number instead.

Here’s a screenshot of what the Uber app shows you once you’ve requested your ride. Pay extra close attention to the six-digit PIN number at the bottom. You’re gonna need that.

Once you have your six-digit PIN number, you then need to stand in line (just as you would as if you were queuing up for a taxi). Just follow the signs – everything is very clearly marked, and there are even Uber employees there to assist you. They will show you where you need to go. 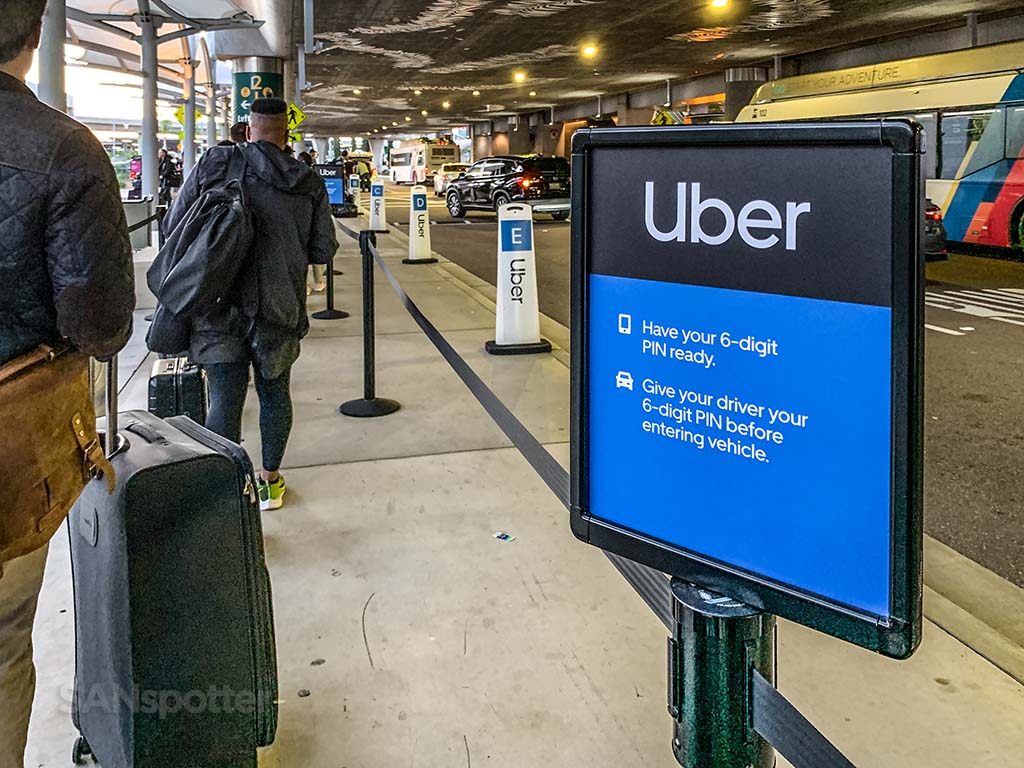 The line forms here. Kinda feels like queuing up for an old-school taxicab, doesn’t it? 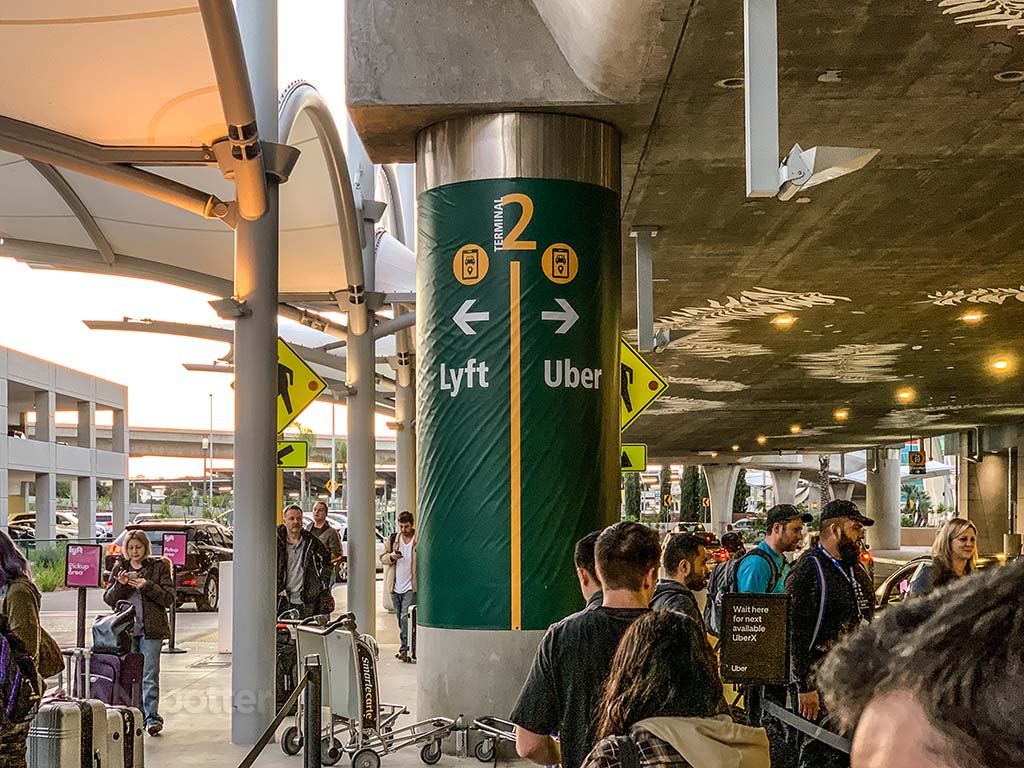 FYI, Uber is on the right, and Lyft is on the left.

When you reach the front of the line, wait for the Uber assistant to tell you where to stand. Just like at taxi stands at most major airports, there are coned areas designated with letters where the dispatcher will tell you to wait for the next available car. 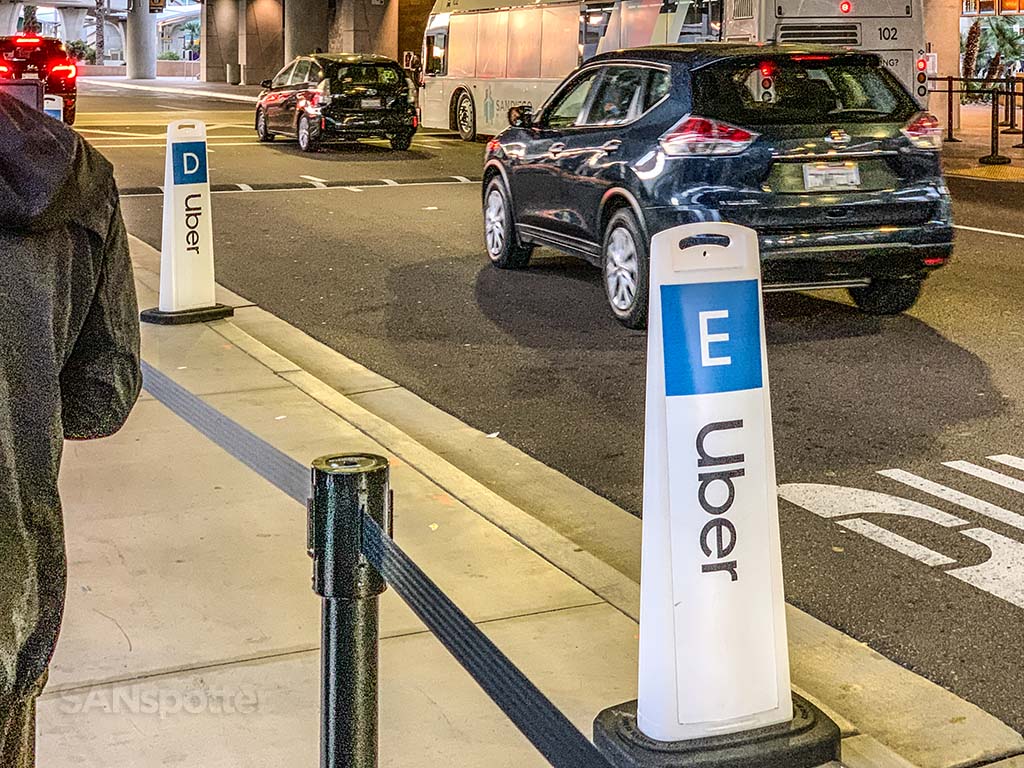 Once you reach the front of the line, the friendly Uber assistant will tell you which one of these lettered cones you need to stand next to. See? Paying attention in grade school was important after all.

When the next available car drives up to your spot, show the driver your six-digit PIN number. He or she will enter that data into their app, and your ride will begin.

Pros and cons of this new Uber setup at SAN

Not surprisingly, there has been a lot of controversy surrounding this new way of using Uber at San Diego Airport. Many have criticized it for being slow and confusing, but I personally disagree. I’ve already used this new system three times over the past month, and each time has been a very positive experience.

To summarize my experiences as succinctly as possible, let me throw out a few pros and cons regarding this new six-digit PIN system:

If it isn’t obvious by now, I am a really big fan of the new Uber set up at San Diego Airport. Here are two more few specific reasons why:

1. This new setup greatly reduces the chances of being scammed by a driver

Yes, shady Uber drivers are definitely a thing. One of the most common scams as of late is having a driver cancel a ride on you. More specifically, they are trying to get you to cancel the ride since they still get paid a small amount for accepting the ride in the first place. If you cancel a ride on them, they get paid, and they don’t even have to drive you anywhere.

This is the how it works:

This new six-digit PIN system prevents this scam. The driver can’t accept your ride until you are standing right outside their window showing you them your PIN number to initiate the ride.

I admittedly have a bit of social anxiety, and trying to hail an Uber at the San Diego airport has always been a difficult experience for me. Standing in the designated pickup area with 50 to 75 other people all pacing around nervously looking for their Uber was organized chaos at its finest. A total butt-clenching experience.

This new six-digit PIN and queueing system is so much more organized and I haven’t felt any stress at all getting an Uber this way.

Hopefully everything that I’ve shown and described above gives you a pretty good sense of how to use Uber at the San Diego Airport. However, in order to make sure I’m covering all the bases, I thought it might be a good idea to list out a few FAQs as well:

How long of a walk is it from the terminal (1 or 2) to the designated rideshare pick up area?

Less than 2 minutes walking at an average pace. Give yourself 4 minutes if you’ve got two very angry four-year-olds and three large suitcases in tow.

Where are the designated rideshare pick up locations located?

As I mentioned above, there are two designated Uber pick up areas at the San Diego Airport (one for each terminal). Both are located at the ground level directly across from the main terminal building. From baggage claim (both terminals), simply walk outside and across the street.

How much does an UberX typically cost from the airport to downtown?

It varies slightly depending on the time of day (surge pricing is a thing), but you can typically expect to pay $7-$10 for a ride into downtown.

How much does it cost for a ride to La Jolla / University City?

In my experience, it usually costs anywhere from $22-$26. Note that I used to pay upwards of $40 one-way for a taxi ride going the same distance. Uber is definitely the better deal here!

Will drivers be upset with you for taking a short ride just off airport property?

In my experience, yes. They will be. Especially now with the six-digit PIN system that requires Uber drivers to queue up just as taxi drivers do. Since it can sometimes be a very long wait for drivers to reach the designated pick up area, it should be totally understandable that they would be miffed to get paired up with a rider who only needs to go a couple miles.

For what it’s worth, I’d recommend taking a taxi if you don’t need to go far. This will prevent an angry Uber driver from giving you a bad rating.

What about other services such as Uber Black or Uber Pool? What is the process / procedure for using these Uber services from San Diego airport?

Good question! At the time of this writing, Uber black and Uber Pool operate the same way as they always have from the San Diego Airport. This means that you use the app to request a ride (just as always), and wait for the driver to arrive. Note, however, that there are specific pick up locations (adjacent to the UberX queue) for each terminal. Simply follow the signs. Don’t worry – if you’re standing in the wrong spot, one of the Uber staff members working the area will be quick to tell you where you need to be.

Sign up with Uber using my code and your very first ride is free!