Home
|
Travel Discussion
|
Aviation gifts for him: 25 really good ideas for any occasion

Yeah, I know. I realize that I’m publishing this post on Christmas Eve, so it’s a little too late for this particular “aviation gifts for him” article to be something useful for the current holiday season. No matter though. This list is not intended to be holiday specific, so anything I mention below would be an ideal gift for any guy on your list who is a massive aviation fan / nerd / groupie / addict.

Please do be aware that aviation enthusiasts (especially us guys) love receiving gifts for no reason at all. Whether it be for a birthday, Christmas, Valentine’s Day, or whatever – receiving the gift of aviation is always very much appreciated. You’re also going to be an absolute hero by doing so, and it’s a total “win-win”.

Also, do be sure to check out my list of the best aviation gifts for HER if you’ve got both males and female aviation fans to shop for…

How this “aviation gifts for him” list is organized

When thinking about aviation gifts for him, my natural inclination is to break it out into several major categories. From there, it makes the most sense to break it down and list specific ideas in each of those top level sections. By doing it this way, I was easily able to come up with 25 really good ideas in 5 major categories.

Hopefully that will make this list easy to digest (and filter) based on the specific things that the aviation guy in your life is into.

My 5 nominations for the all time best aviation gifts (for him):

The most important thing to know when it comes to buying aviation gifts for him is that guys aren’t picky. If he’s into airplanes and aviation, nearly any aviation-related gift is going to hit the mark.

If there is one thing that is absolutely guaranteed to make any aviation fan giggle with delight, it’s a diecast model of an airplane. Speaking from my own experience as a diehard aviation fan (I also happen to be a guy), I’d be absolutely delighted if someone gifted me a die cast model of nearly any type of airplane.

I may be a grown man, but that doesn’t stop me from obsessing over diecast models of my favorite things.

Since any type of airplane will do, this makes it the ultimate aviation gift for him. However, there are diecast models of nearly every type of airplane in every airline delivery that ever existed. Therefore, you’re going to win tons of extra bonus points if you give him a diecast model of his all time favorite airline / aircraft combo.

Not sure where to start? I’d recommend focusing on 1:200 scale models, which are small enough not to be a nuisance, but big enough to capture all the details in amazingly accurate detail. Note that I prefer the Inflight brand, which consistently strikes a nice balance between incredible detail and price. These are very good diecast models for the money.

Some of my favorite diecast aircraft models include:

If you’re not exactly sure which airline and aircraft combo is his absolute favorite, you can rest easy knowing that any one of the items I listed above will make a great gift. These are the most popular and well-liked combinations in the airline industry at the moment, and I guarantee that choosing any of them will make you a rockstar gift giver in his mind.

Another surefire aviation gift for him is something that he can wear. I mean, let’s face it. Guys (especially aviation enthusiasts) love wearing clothing which matches their interests and personality. You just can’t go wrong giving a guy a hat or shirt with his favorite thing on it.

My current favorite place at the moment for buying aviation-themed apparel is 08left.com. My buddy Ryan owns the shop, and I can vouch for him being a mega-ginormous AvGeek with a passion for the products he creates and sells.

No, this isn’t Ryan. This is me (SANspotter) sitting in the main terminal at HNL recently, just an hour or so before hopping on a flight back to the mainland. My hat from 08left.com is a clear indication that I am a huge aviation nerd.

Here are a few items from 08left.com that I own (and wear frequently). As a huge aviation enthusiast who also happens to be a guy, I can totally vouch for aviation-themed apparel as being perfect aviation gifts for “him”.

Yours truly rocking the 08left Sunset Hoodie in Bogota, thinking quite fondly of the Avianca flight from EZE I had just stepped off of. 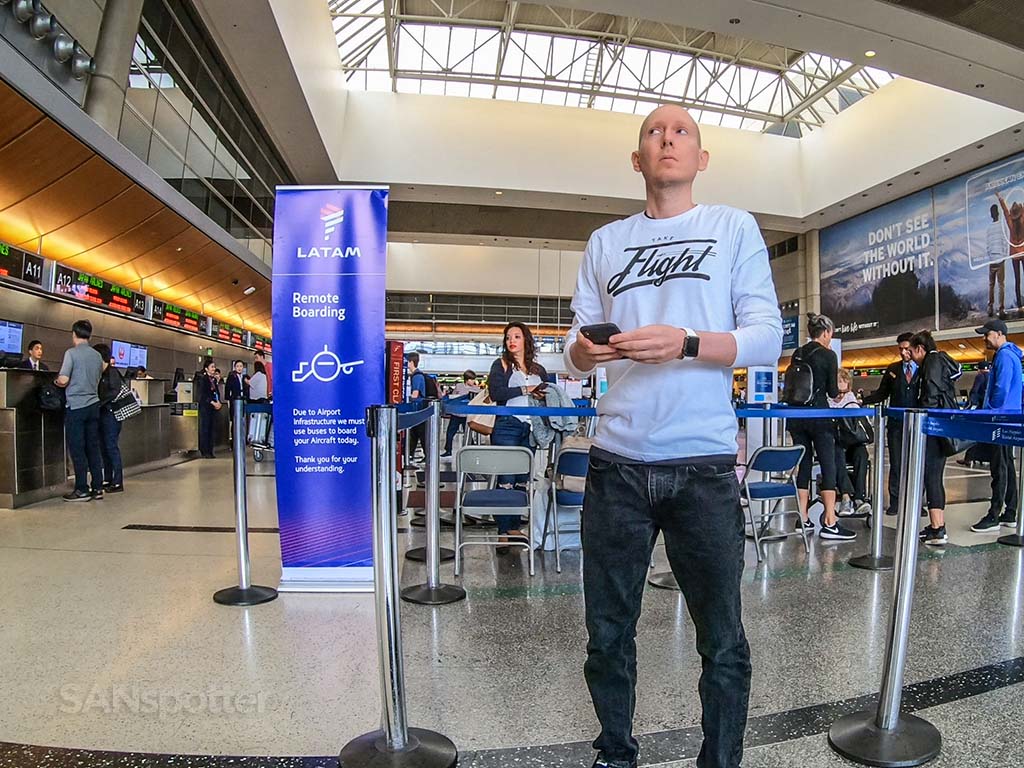 This me, looking awfully unsure about what it is that I’m doing (as usual). I also happen to be wearing the 08left “Take Flight” shirt. A very appropriate piece of clothing at the time, since I was just about to step on a LATAM flight to Santiago.

It should also be noted that Amazon is a pretty good place to find some really good aviation-themed apparel as well. Here are some of my favorite items that I’ve been tempted to pull the trigger on myself:

Another thing that I immediately think of when someone says “aviation gifts for him” is wall art. You just can’t go wrong giving a guy a huge poster or mural of anything even remotely related to his love of aviation.

Trust me on this: giving the gift of aviation-themed posters and art is super easy and very safe. Don’t worry – you can’t mess up! Why? Well, primarily because it’s completely unnecessary to match the content of the poster to his specific interest. As long as you give him something vaguely aviation related, he’s going to be very proud to hang it on his wall.

I mean, really. What guy would NOT want this hanging in his man cave? Best of all, it’s completely customizable! Read more about it here.

A slight word of warning though. Giving the gift of aviation-themed wall art can be both good and bad. It’s really good because of how great of a gift idea it is. It’s bad because (as I said) he’s going to be super eager to hang it on the wall for the world to see. If you live with this guy, it means that you’re going to have to live with it too. It’s in your best interest to get him something that looks great!

Thankfully, this is where 08left comes to the rescue (once again). Ryan, the owner of the site, is an extremely talented designer and creates everything on his website himself. His vast catalog aviation-themed posters and wall art is mega-cool and I’d personally be thrilled to hang any of it on my own walls.

Here are some of my particular 08left favorites:

If you’ve made it this far, I hope you’re starting to understand that there are lots of great ideas when it comes to aviation gifts for him. However, we’re not quite done yet. I’ve got more ideas:

Yet another sure-fire aviation-themed gift is a 1 year membership to Priority Pass. It’s the easiest and most cost effective way to give him access to over 1200 airport lounges worldwide. Best of all, it’s the gift that keeps on giving all year long.

I’ve been a happy Priority Pass user for several years now, thanks the the complimentary annual membership I get with my American Express Platinum card. 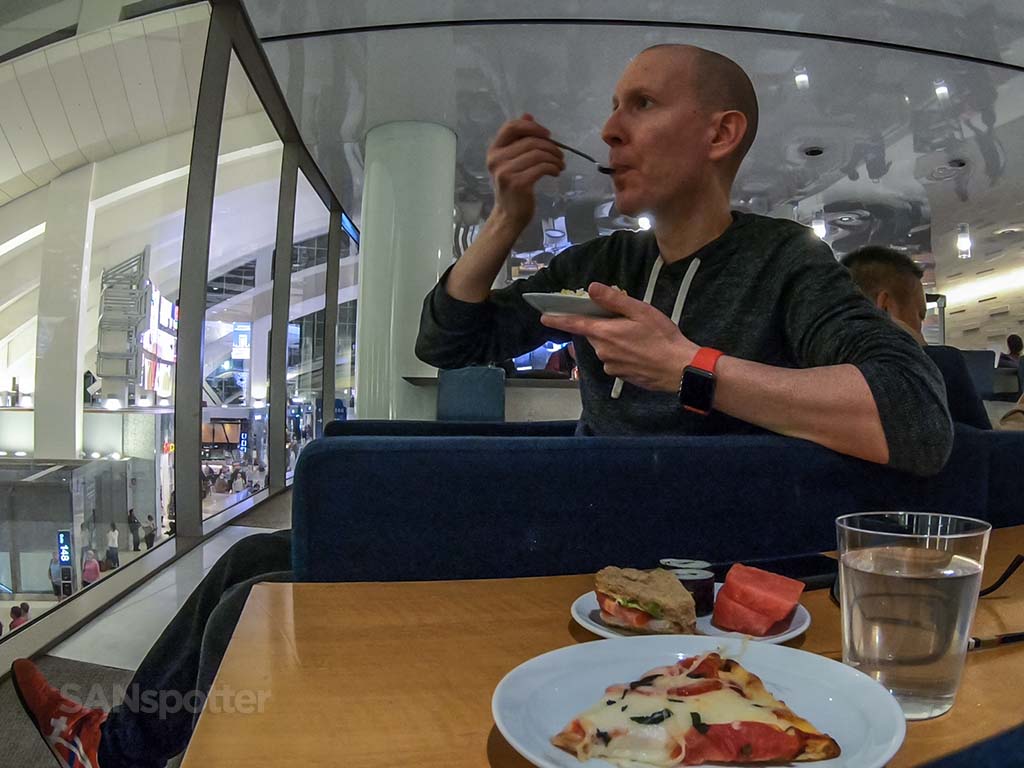 This is what I look like enjoying a free meal in the coveted Korean Air Lounge at LAX. Thanks Priority Pass!

And yes – even if Amex didn’t hook me up with access every year, I would have no problem at all paying for an annual Priority Pass membership out of my own pocket. It’s definitely been a lifesaver for me during all my travels.

Even if he travels only a few times a year, the convenience of having free lounge (and restaurant) access in nearly every airport makes this is a perfect aviation gift for him!

OK, this is it. I’ve saved the best idea for last! In my not so humble opinion, airline tickets are (by far) the ultimate “aviation gift for him”. After all, if his main passion in life is to fly, there’s not much better you can do than by giving him the gift of flight. The best part about this, by far, is that you can’t mess this up either.

For example, as much as I make fun of flying on dumpy little United Airlines CRJ-200’s, I would be thrilled to death if someone gifted me round-trip tickets between any two airports on that little aircraft I hate so much. The fact of the matter is, just like all aviation geeks (AvGeeks), I love flying no matter what the aircraft or route is. Go ahead – buy him airline tickets to anywhere in the world on any airline / aircraft combination. I guarantee that he will be incredibly excited about it.

Even though it’s totally impossible to mess this up, I’ve got a few specific ideas for specific airline tickets that will simply blow his mind:

As an AvGeek myself who is more into the modern aircraft (such as the A350 and 787), I’d still pee my pants with excitement if someone gave me the gift of a ride on an old piston-pounder such as the DC3.

There aren’t many places left in the world who offer rides on older aircraft such as this, but here are a few that I found just now doing a quick search in Google:

As scary as it may seem, it’s not hard at all to buy gifts for an aviation enthusiast. Especially if he’s a guy who has been fascinated with flight for his entire life. We are not picky!

I’m very confident that everything that I have included in this list is something that will satisfy most every man’s deepest AvGeek desires. It sounds kinky, I know, but you gotta trust me on this.