Home
|
Travel Discussion
|
Sam Chui’s net worth: I tried to calculate it, and…now I feel poor.

Well – it’s summertime, and that only means one thing here in the northern hemisphere: everyone is on vacation (or outside enjoying the nice weather) and it’s the time of year where less of the content I produce on a weekly basis actually gets seen. Therefore, it’s the perfect opportunity for me to take a little break myself and write about some fun stuff that I normally wouldn’t include in my regular content schedule. And what’s more fun (and offbeat) than trying to calculate Sam Chui’s net worth?

For those of you who have no idea who Sam Chui is (shame on you!), he’s basically the Godfather of AvGeekdom. He’s always been an “influencer” in the aviation and airline niche, and…well…if I have to explain it, you wouldn’t understand. Since the entire point of this article is trying to calculate his net worth, let’s just jump right into that before anything else. I’ll follow it up with a brief history of Sam (and why he’s so significant) later in the post.

In order to properly calculate Sam Chui’s net worth, we first need to look at his annual income:

Ok, so, before I go any further with this, I do need to say that I’m totally going to be pulling the following facts and figures right out of my butt. I have no solid proof for the numbers I’m about to write, but as an aviation blogger and YouTuber myself, I do feel like I have enough experience and credibility in this niche to guess somewhat accurately(ish).

Then, we need to subtract his expenses:

By now, you may be thinking something along the lines of “Holy crap! Sam Chui’s net worth is absolutely insane!” But…hold on a second. Yes, he’s generating a lot of income on an annual basis. However, based on what I can tell (as an outside observer who doesn’t know him personally), he’s got some fairly significant expenses as well:

Finally, what do we know about Sam’s assets?

Crickets are chirping in my brain as I begin to attempt to factor in owned assets into the “Sam Chui net worth” equation. The truth is…I have no freaking clue what significant assets this guy owns that are paid off and appreciating.

To keep things simple, let’s just say that Sam has $500k in home equity and $500k in various retirement accounts and investments. This isn’t unreasonable for someone of his age and history of high-income professions.

I’m willing to bet that most people think that Sam Chui is a 10X millionaire who has everything given to him for free. Yes, he’s fortunate enough to have connections that little guys like me will likely never have, but there are some rather significant expenses that offset his hefty income. 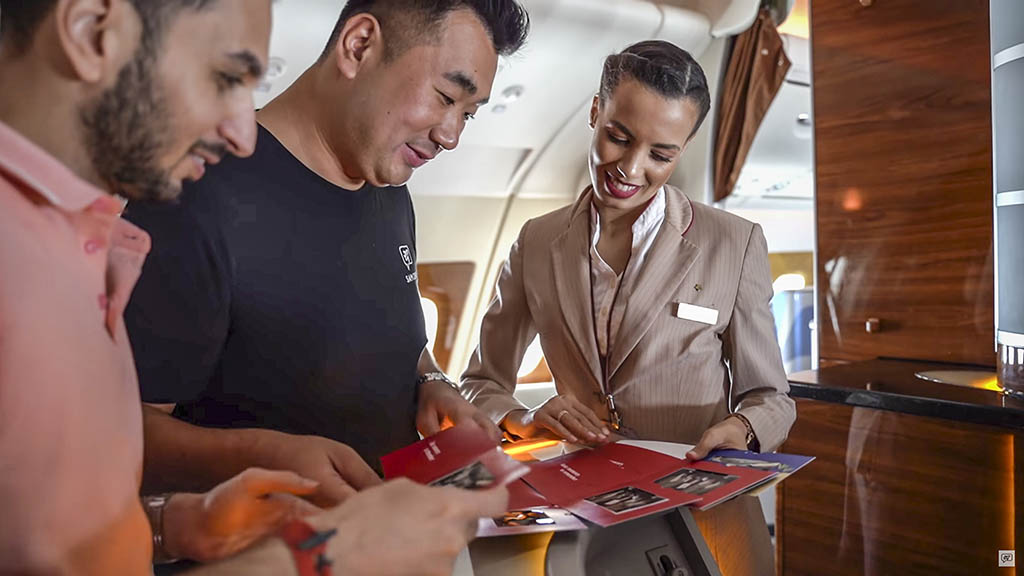 What exactly is Sam is showing them? For all I know, it’s pics of the solid gold toilets he’s installing in his house once he gets home from this trip (lol). But seriously – this picture captures the essence of what Sam is: an extremely passionate and outspoken person who loves to interact with cabin crews.

Still, a net worth of $2,000,000 is incredibly impressive for a guy who built a career from his biggest passion in life. Not only that, Sam has risen to the top of the AvGeek food chain – to the point where he’s known to people who have no interest (or knowledge) in the airline industry. Seriously – I’ve had completely random people (like coworkers and grocery store staff) ask me if I knew who Sam Chui is once they realize I’m an airline blogger / vlogger.

You’re probably wondering what kind of scenario involves revealing my interest in airlines to a grocery store employee…but that’s not the point of this post. The point you need to focus on is that Sam Chui is incredibly successful and he’s got one heck of a net worth to match.

The interesting thing about Sam is that he’s extremely proactive. What I mean by this is that everything that he’s ever done with his hobby of airlines and aviation has been to the extreme. For example:

Sam Chui built his net worth around:

For example, It was actually Sam who brought aerial airport photography to the mainstream in the early to mid 2000’s. At the time, the idea of helicopter photography over a major airport what was completely out of the realm of what normal aviation photographers such as myself were doing at the time. But now, it almost seems as if you’re not considered a legitimate aviation photographer unless you’re hanging out of a helicopter with a 500mm lens over a major airport on a regular basis.

It was such an extreme concept back then, but Sam became known for it and it propelled him to the top of one of the largest aviation and airline hobby websites in the world. Additionally, Sams easy-going personality and his love of meeting people allowed him to build an incredible network of personal connections within the airline industry.

I’m always amazed at how he always seems to be given exclusive inside access to every airline product that he flies – even if he pays for the ticket himself.

He’s usually the first onboard (long before anyone else), he’s able to gather the entire crew for a group photos, he sometimes helps the cabin crew serve meals – it’s unreal. As a moderately introverted and shy individual myself, I can’t even imagine the conversations that must happen to allow him into those kinds of situations. 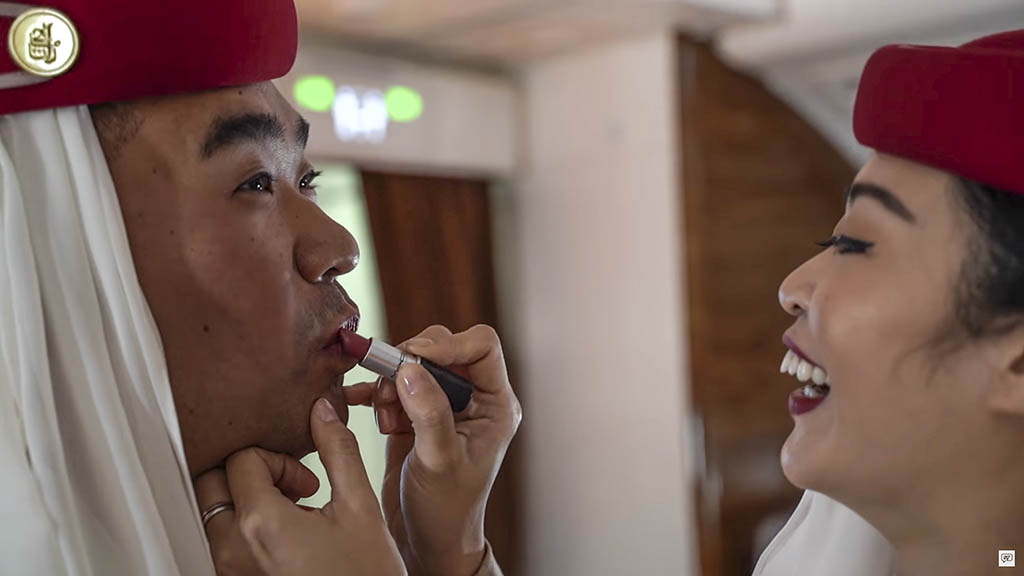 This. THIS is why my lowly YouTube channel will never be as popular as Sam’s. Can’t say that I’ve ever slathered on lipstick for one of my airline reviews, though…if that’s what it takes to succeed…

It’s these social interactions and valuable connections in the airline industry which have contributed so much to Sam Chui’s net worth.

On a side note: I wonder how many times he’s actually been flat out rejected by an airline for exclusive access to something? I mean, as busy as airline staff and cabin crews can be sometimes, it doesn’t seem unreasonable that he’s been told to pound sand (and take his seat like a normal passenger) every now and then. I wish he would talk about THAT kind of stuff more often!

What’s next for Sam? And what’s it going to take to propel his net worth to the next level?

From my lowly perspective, Sam is living the dream of nearly every AvGeek on the planet. He flies around the world for a living, he’s given exclusive access to special events, and he’s so well known that he’s almost always given special treatment on any flight that he takes. Seems like a pretty good life, doesn’t it?

However, as a full-time aviation YouTuber and blogger myself, I know exactly how difficult it is to create this type of content on a regular basis. There’s always immense pressure hanging over our shoulders, and we’ve always got to be ready to pivot and refocus on the next hot new thing. It’s not as easy as it may seem to do this type of work.

Sam seems like he’s in a pretty good position right now, arguably holding the number one spot at the top of the AvGeek food chain. Not only that, he’s got a net worth that most people in this world would envy – whether they’re in the airline industry or not. But at what point is he going to burn out? And where does he go from here? Do you think he’s content to stay at the level that he’s at for the rest of his life?

I sure as heck don’t think so

If there’s one thing I’ve learned about Sam over the years, it’s that he loves to push the envelope of what’s possible. Not only within the airline and aviation hobby, but with himself as well.

Personally, I think YouTube is going to fizzle out and be far too competitive to succeed in within 10 to 15 years (even for mega stars such as Sam). By that point, I could see him moving onto an advisory or consultant role within the airline industry.

Thinking really long term, it wouldn’t seem unreasonable for Sam to finish out his career as a successful airline executive. Heck, is an airline called “FlySam” on the horizon? Time will tell…