Remember the post I wrote about six months ago where I announced that that I finally decided to sign up for ExpertFlyer? I was really excited about it at the time – mainly because I had heard many good things about the service and I was hoping that it was going to elevate my travel game to the next level. Never mind that I had just left my high-paying corporate job and I had absolutely zero money coming in. If I was going to make any headway as a full-time travel blogger, I felt like I needed professional tools to help me uncover the best travel opportunities.

At the end of that post, I promised that I would write a full review of ExpertFlyer once I had the chance to use it for a few months. Would it live up to its promises of being one of the most useful (and powerful) tools available for searching premium award space availability? Would it really be useful in helping to snag the best seats on any flight? And finally, how easy would it be to use? I get lost driving around in my own neighborhood for crying out loud, so ease-of-use was going to be a pretty big deal for me.

Despite how excited I was to dive right in and start taking advantage of all the useful tools that ExpertFlyer has to offer, I admit that I was somewhat skeptical. The overall design of the website seemed a bit clumsy and dated, and right away I wasn’t getting the kind of feel-good vibe I like to have when forking out hard earned cash for a new subscription service. Especially being unemployed and all. 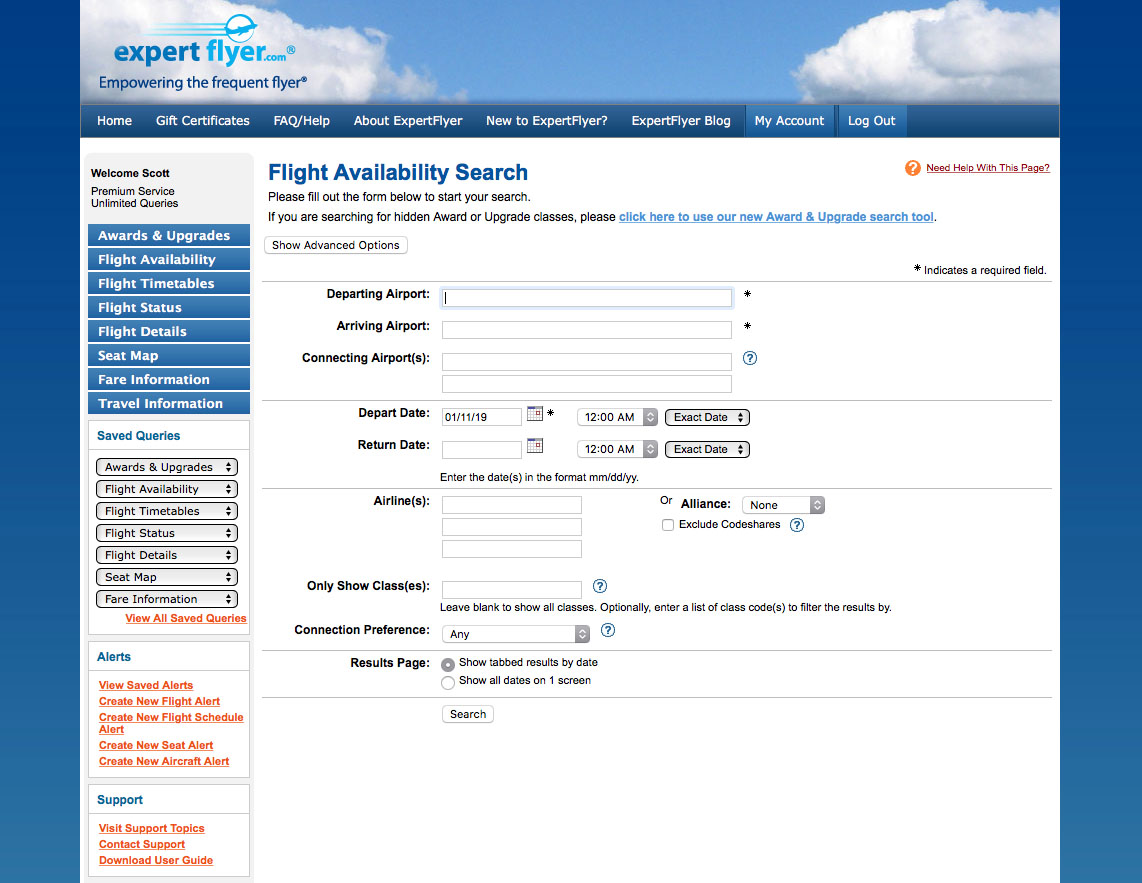 Using ExpertFlyer for more than 30 seconds will give nearly anyone flashbacks to the early 2000’s, but stick with it. You’ll learn to like it once you realize the things it can do for you!

However, I’m getting a little bit ahead of myself here – The point is is that I’ve been a “Pro” level ExpertFlyer subscriber since the day that I wrote that post, and it’s a tool that I’ve been using on a weekly basis. And now that I’ve had the chance to get to know the service on a fairly deep level, I figured that the time was right to come back and write this brutally honest ExpertFlyer review. And as far as I’m concerned there’s no other better kind of review then a short to-the-point pros and cons list. So here we go.

Pro: The promise of being able to uncover available award seats is true. ExpertFlyer definitely lives up to the hype in this regard – as a matter fact, I’ll go as far as to say that it’s annoyingly addictive. I can’t count the hours of sleep that I lost as I sat mute in the middle of the night pecking away at my keyboard trying to find an itinerary for the most epic trip report ever. 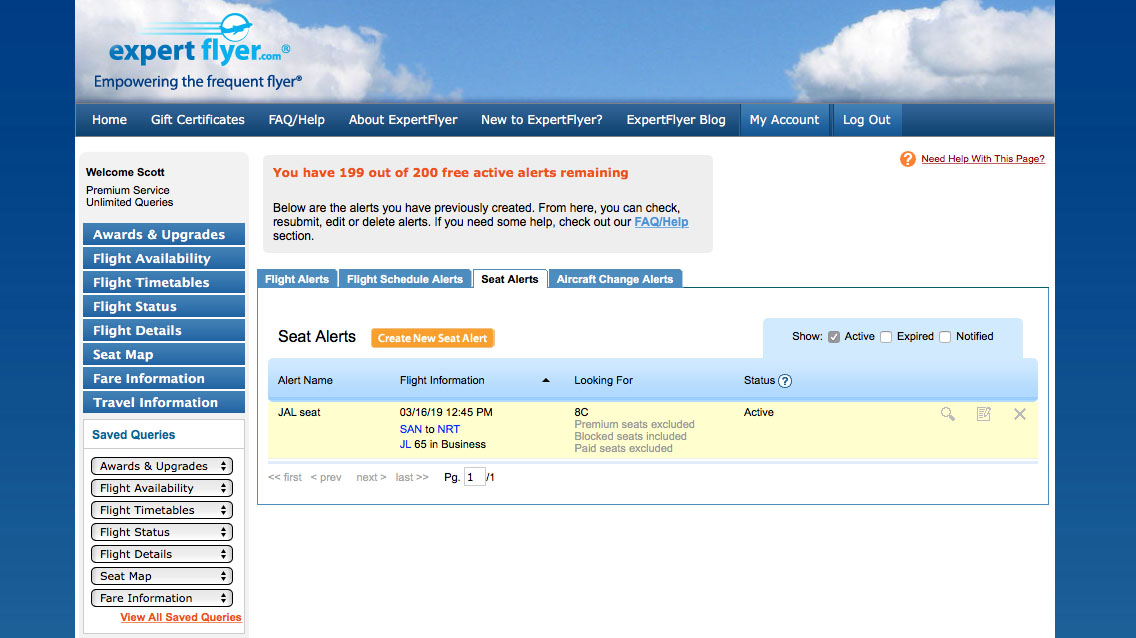 A screenshot showing one of my current active alerts: yep, I wanna fly SAN-NRT again now that JAL has announced they are bringing the Sky Suite to San Diego. Not that I *need* to do it. I just want to. Like, really bad.

FYI, I’ve got some amazing trips coming up for 2019 that were discovered while using this tool. Stuff that I never would’ve found using Google Flights or anything else!

Pro: The ability to set up alerts to notify me for a wide variety of things was extremely convenient. It also prevented me from losing more sleep than I already had. For example, I am a real stickler for getting the window seats just ahead of the wing so that I can get great shots of the engine for my trip reports and videos.

This is been a real challenge for me lately, because it’s rare that I book a flight way in advance and by the time that I do all of the primo seats are usually gone. With ExpertFlyer, I’ve been able to set up alerts that will notify me when specific seats become available. And most of the time, they actually work! Using the power of the ExpertFlyer seat alert tool, I was able to grab some really good seats for my next trip coming up later this month. Trust me – you’re gonna like what you see.

Pro: ExpertFlyer’s way of consolidating everything you need for a powerful flight searching experience is pretty nice actually. I’m normally the kind a guy who ends up with 15 open tabs on my web browser whenever I’m trying to put a trip together, so it’s really convenient and much more organized to do everything from one location. I can search many airlines at the same time (even those not in the same alliance), check current seat maps to see how open or full a specific flight is, and the integration of SeatGuru makes it easy to determine if the seat I want is a good one or not.

Yes, you can do all of these things without being a subscriber to ExpertFlyer, but I guarantee it’s going to take a lot longer because you’ll be jumping from website to website trying to keep track of everything along the way. ExpertFlyer makes that journey super simple.

Con: As I mentioned a few paragraphs earlier, the overall design of the website is extremely dated and pretty much on par with something we would’ve been using way back in the early 2000’s. I know this isn’t a very big deal to most people, especially if it helps to uncover amazing flight opportunities.

The problem is that I spent the last 20 years working as an anal-retentive user experience designer, and trying to stumble around a clunky website such as this just makes me cringe. Surely ExpertFlyer has at least one person on their staff who understands this. I say we promote that person and give them all the power they need to create a slick (but very intuitive and easy to use) user interface.

Con: One of the most common questions I get about ExpertFlyer is whether or not it would be a useful and productive tool for novice flyers. The honest answer is that no – I do not believe that it would be beneficial for anyone who knows very little about the airline industry. The problem is that you kind of have to know exactly what you’re looking for, and there’s no way to set up generic queries like you can and other tools such as Google flights. 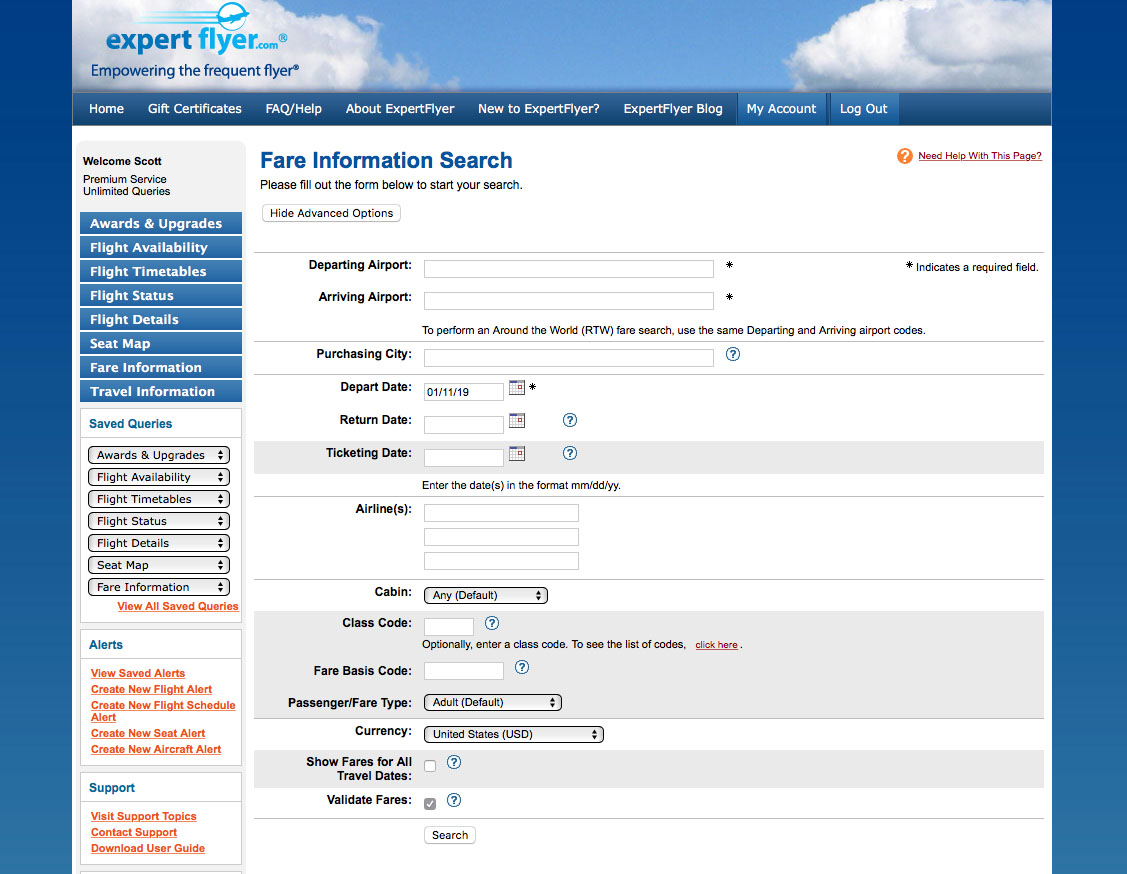 An example of a fare search screen in ExpertFlyer. If you have no idea what half this stuff is, run like the wind because ExpertFlyer is not for you. For the rest of you…welcome to your new addiction.

The problem with ExpertFlyer (for novice flyers that is) is that you can’t just say “show me the cheapest business class fares from my city for next weekend”. You literally have to select the airline you want, the date you want, and even the specific flight number you want – stuff that most novice flyers wouldn’t want to deal with because it requires a lot of knowledge and research about existing flight options. For this reason alone, I would never be able to recommend this tool two people who fly maybe once or twice a year. It just doesn’t make sense.

Con: To piggyback further a bit off of my last point, even I (a fairly seasoned flyer) do feel incredibly frustrated sometimes when attempting to do a broad search. As far as I can tell, ExpertFlyer isn’t built for broad searches. You have to know exactly what you’re looking for, and if you don’t you’re going to end up frustrated and never wanting to come back. However, because it’s so good at giving me the ability to set up alerts for triggers that I specify (such as award space opening up or my desired seat becoming available), I remain a satisfied subscriber.

When it comes right down to it, this ExpertFlyer review was really easy for me to write. I love how it simplifies the process of putting complex itineraries together, as well as helping me identify available business class award space. Having the ability to set up alerts to notify me when the seat I want becomes available has been a huge plus as well.

On the flipside, I’ve discovered that ExpertFlyer is a tool that lives up to its name. It’s built for expert flyers who are familiar with the frequent flyer lingo, and not the casual traveler who flies once a year to visit grandma. You’re going to have to spend some time learning all the tools to get the most out of it, but once you do you’re likely to find that it’s something you can’t live without.

Anyway, I have grown to love it’s quirks. And based on the things I’ve been able to do with it, I think that I’m going to be a subscriber for a long time to come. Not that I’m an expert or anything – but it sure helps me to feel like one.