Seat map of this Delta Air Lines MD-88 courtesy of seatguru.com) showing my seat (31E) for this flight to ATL. 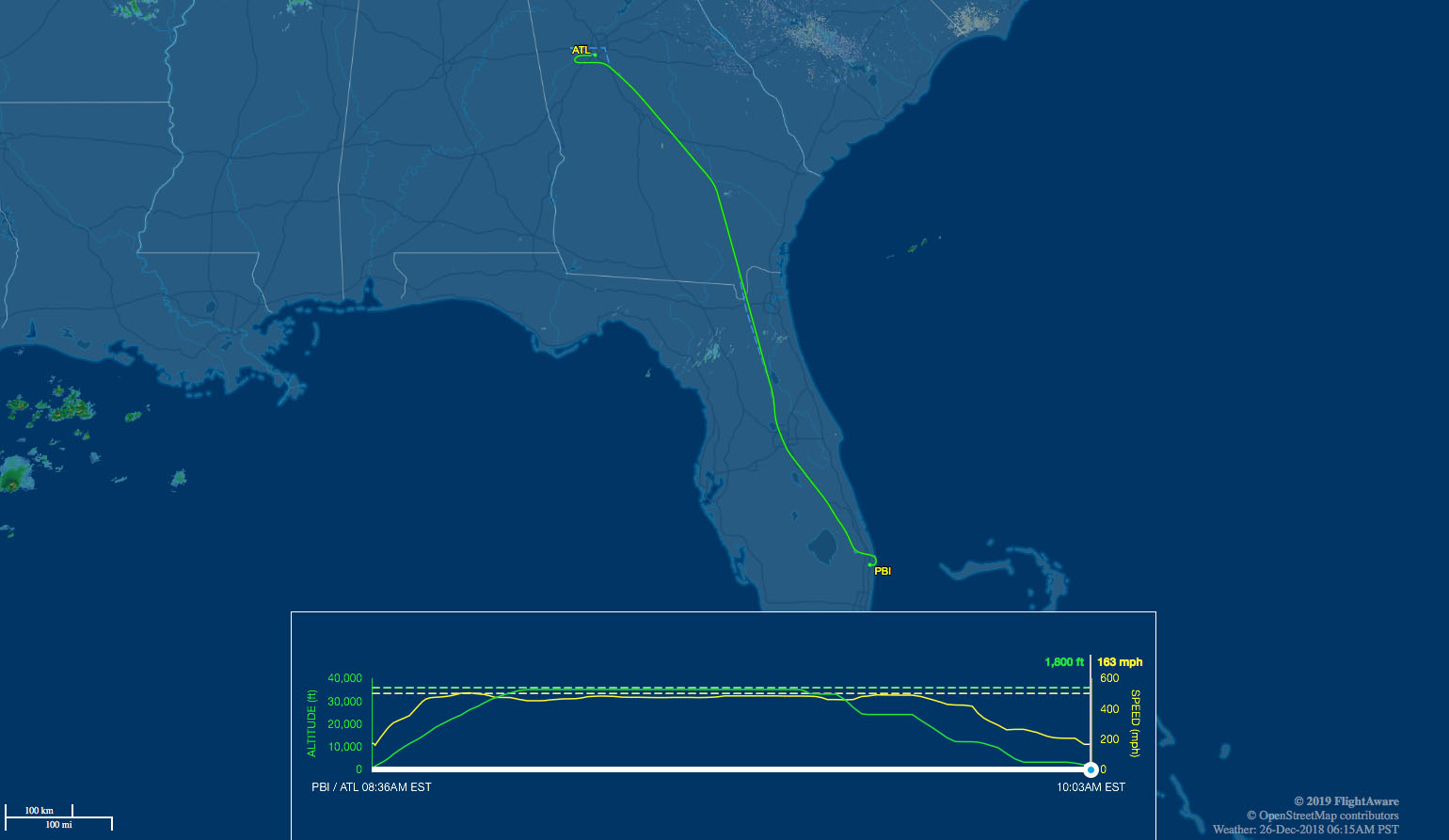 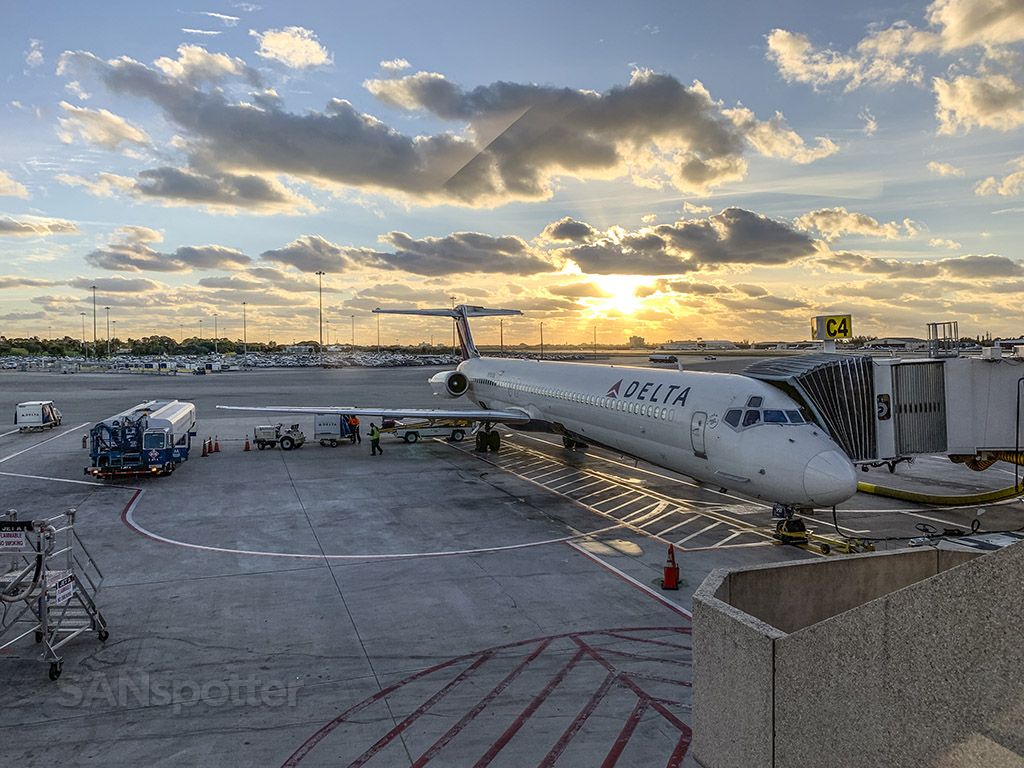 It’s as if God himself said “oh ****! SANspotter is flying an MD88 out of West Palm Beach this morning and I know how much he likes dope sunrise pics for his trip reports. I need to get crackin’!” 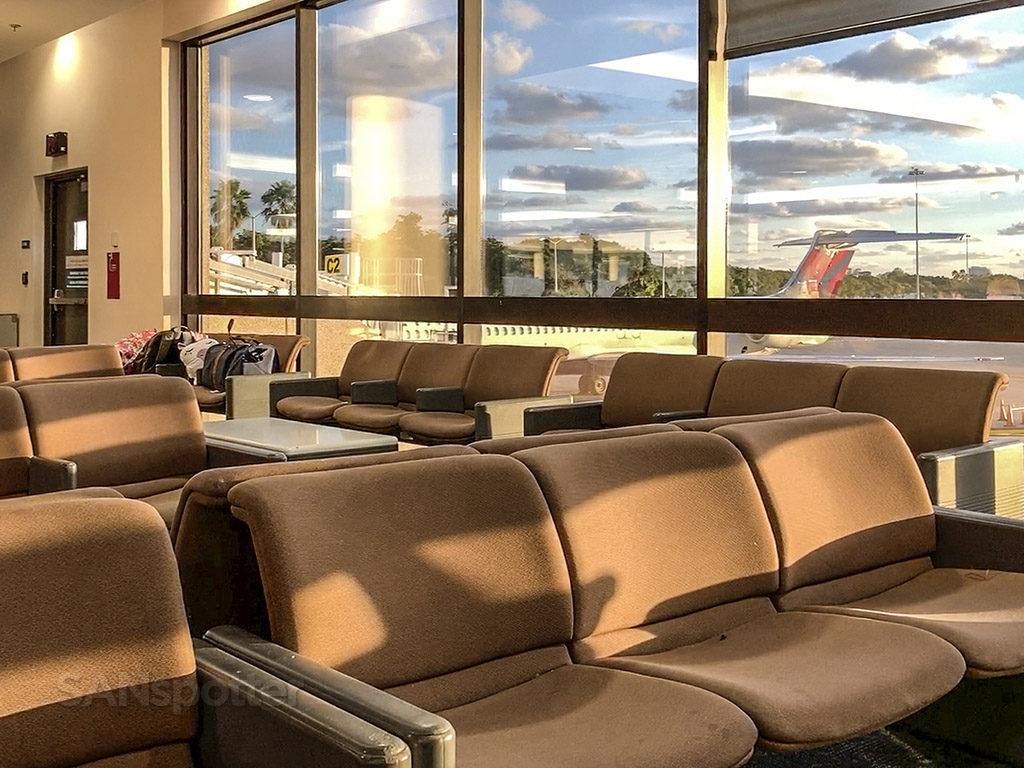 If the lighting is good (and there’s a Delta MD-88 in the frame), it’s a pic that’s going in the trip report. 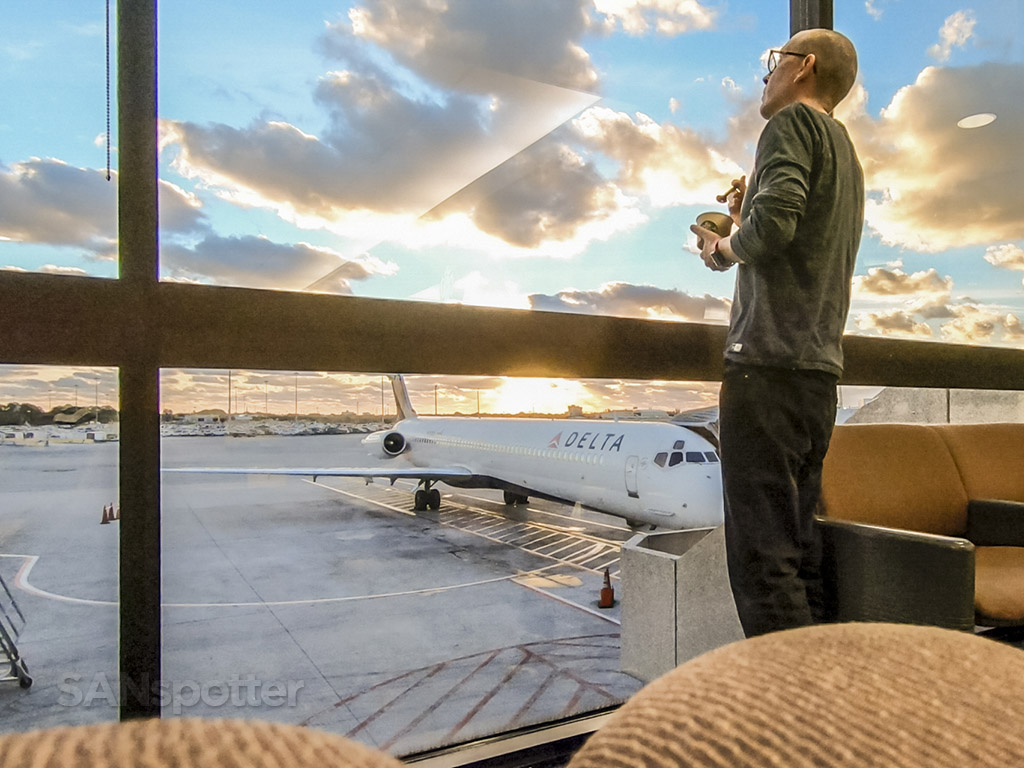 How perfect of a trip report pic is this? I’m even eating oatmeal too (as a way to counteract the horrifically large quantity of unhealthy “holiday” calories I ingested over the past two days). 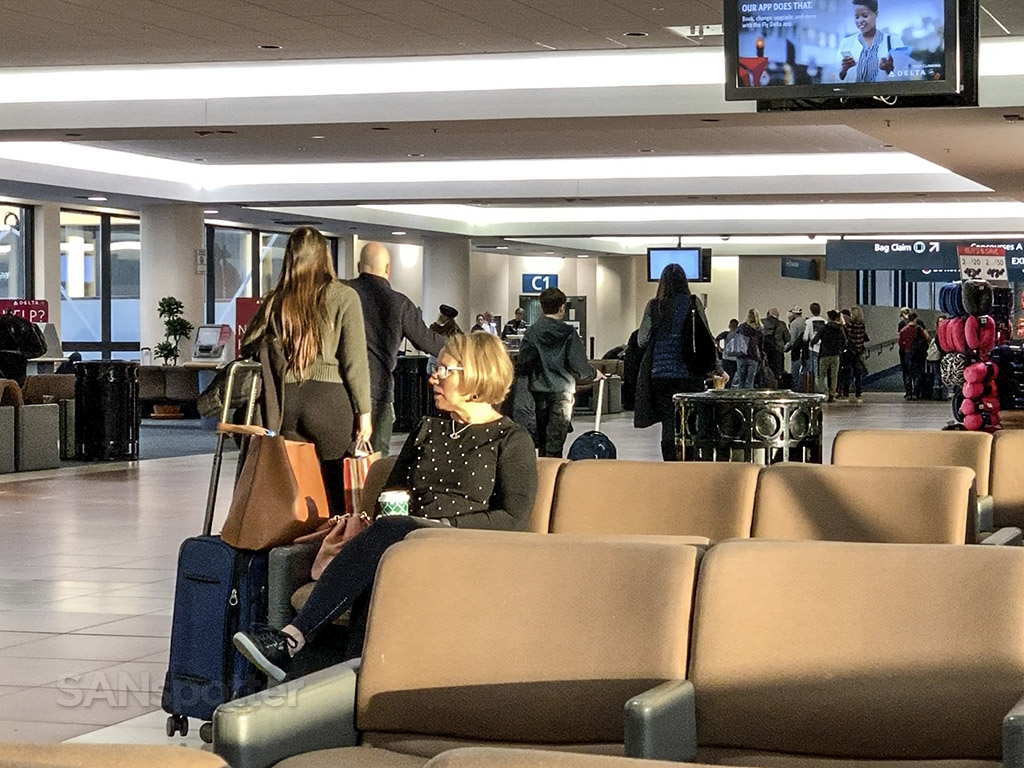 Another pic of absolutely nothing – only because the lighting was magical that morning. Florida sunrises are the best. 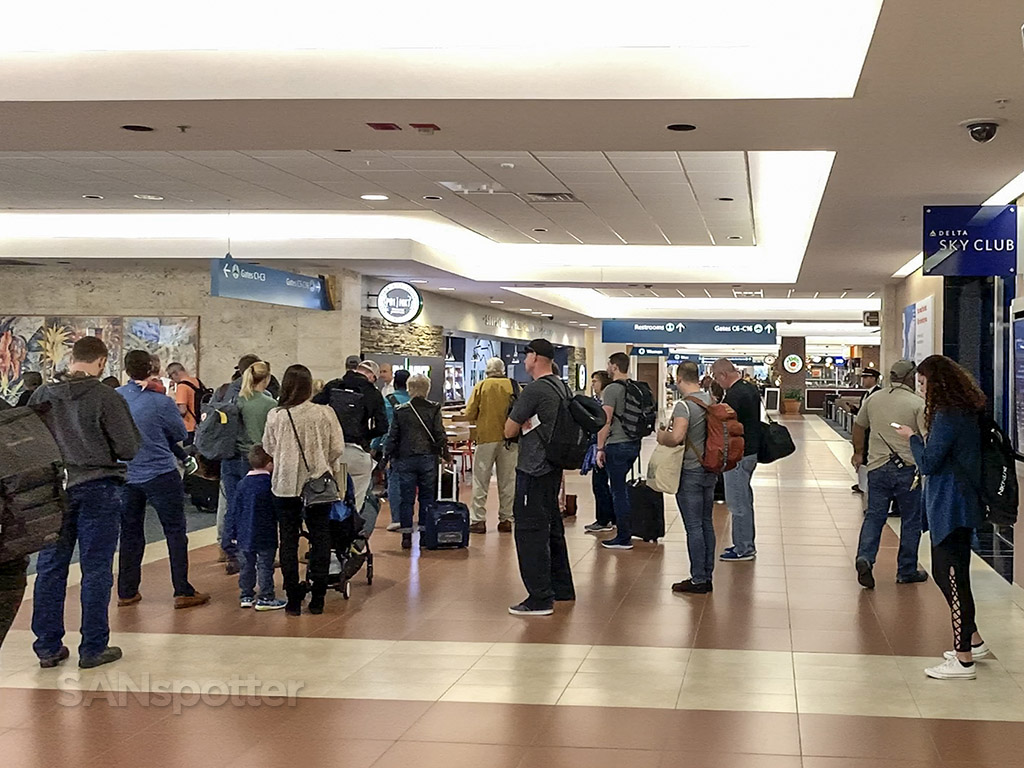 Ok, yeah, it looks like a shopping mall that hasn’t been updated since 1993. But I love everything about PBI! 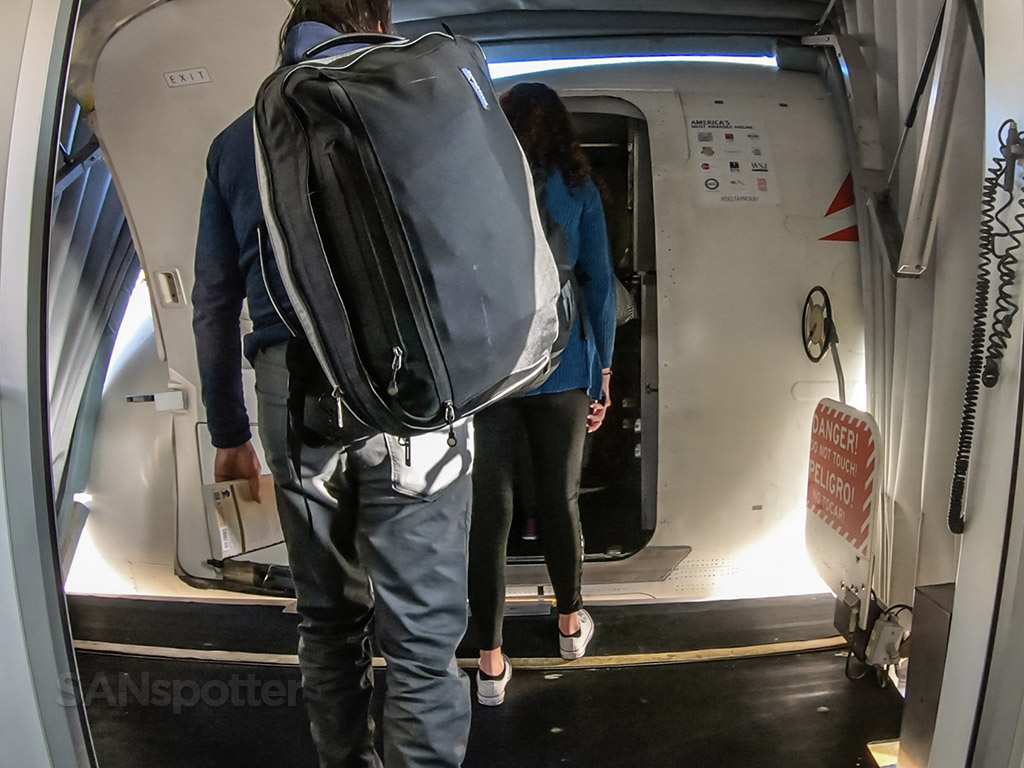 Since my wife was traveling with me, I think I missed a golden opportunity to hand her the camera stand at the door and wave like every US president has since the 1930’s. She probably wouldn’t have spoken to me for days afterwards though – she’s not as enthusiastic about my trip reports as I am. 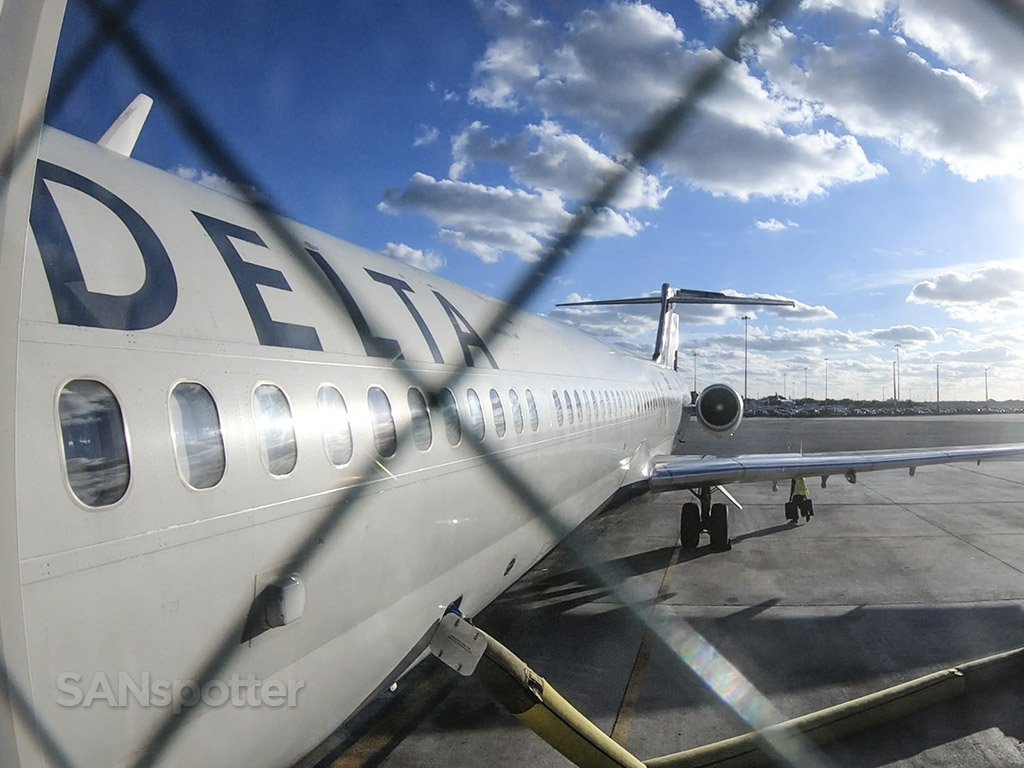 Now that’s a sparkly airplane. According to the guys at my local car care center, this looks to be the $28 “supreme” wash. Complete with bug remover and tire shine! 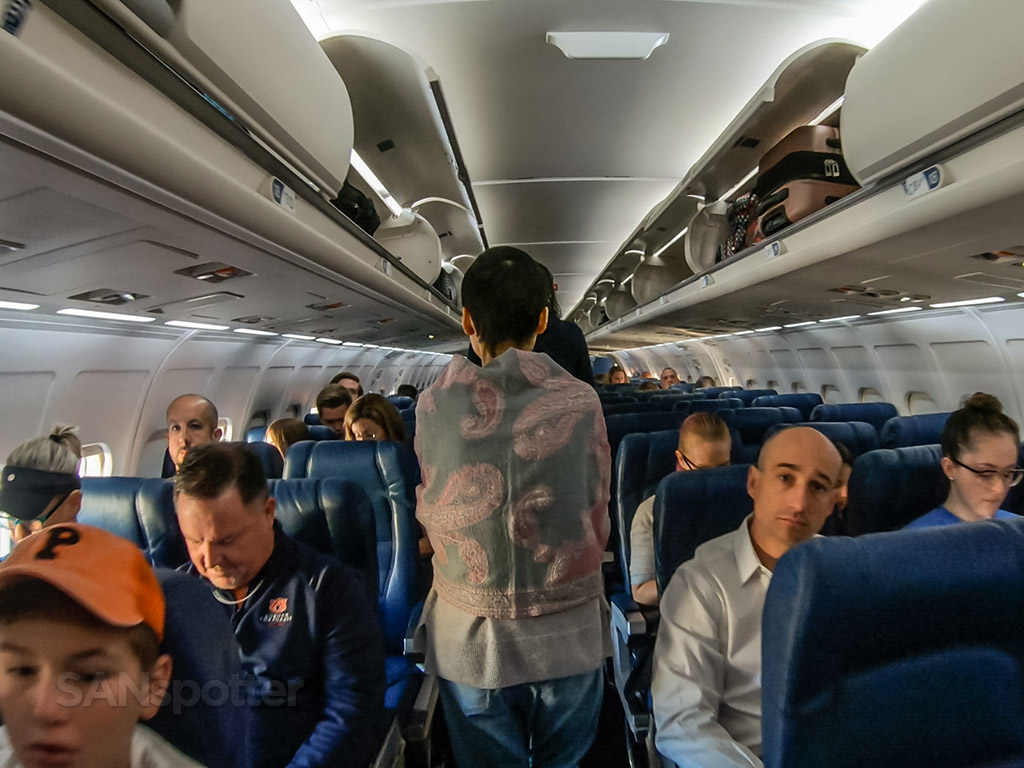 The guy in the white shirt looks really surprised that I’m making a trip report for a lowly MD-88 flight up to ATL. Either that or I’ve got a clump of oatmeal on my face that I missed. 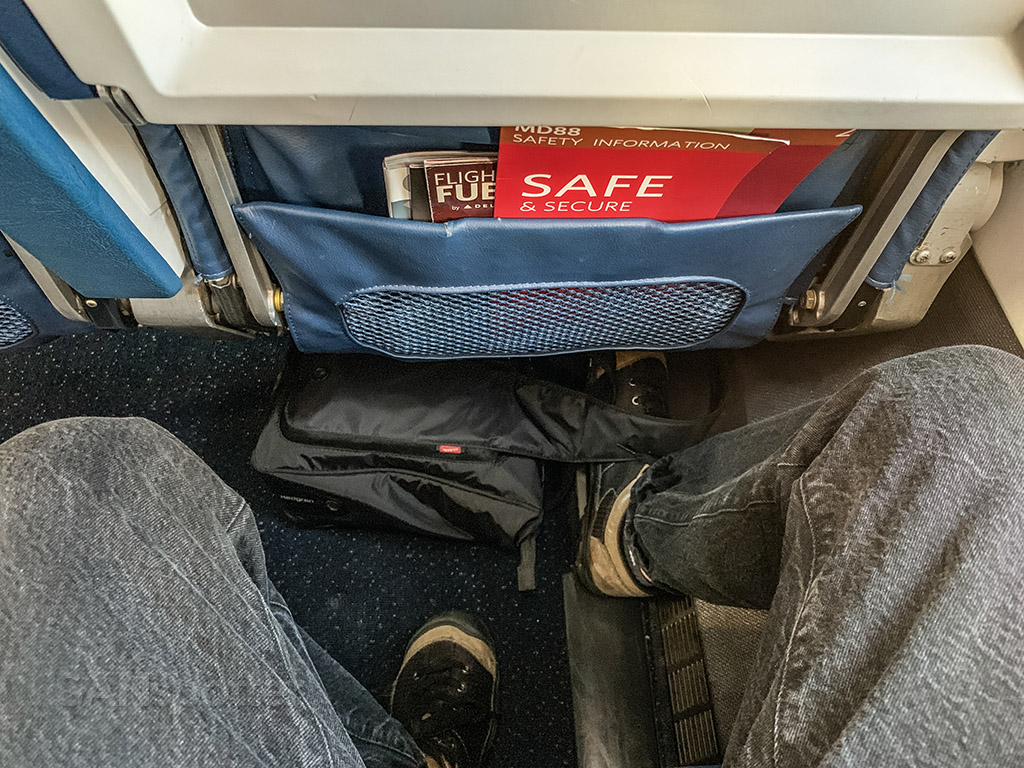 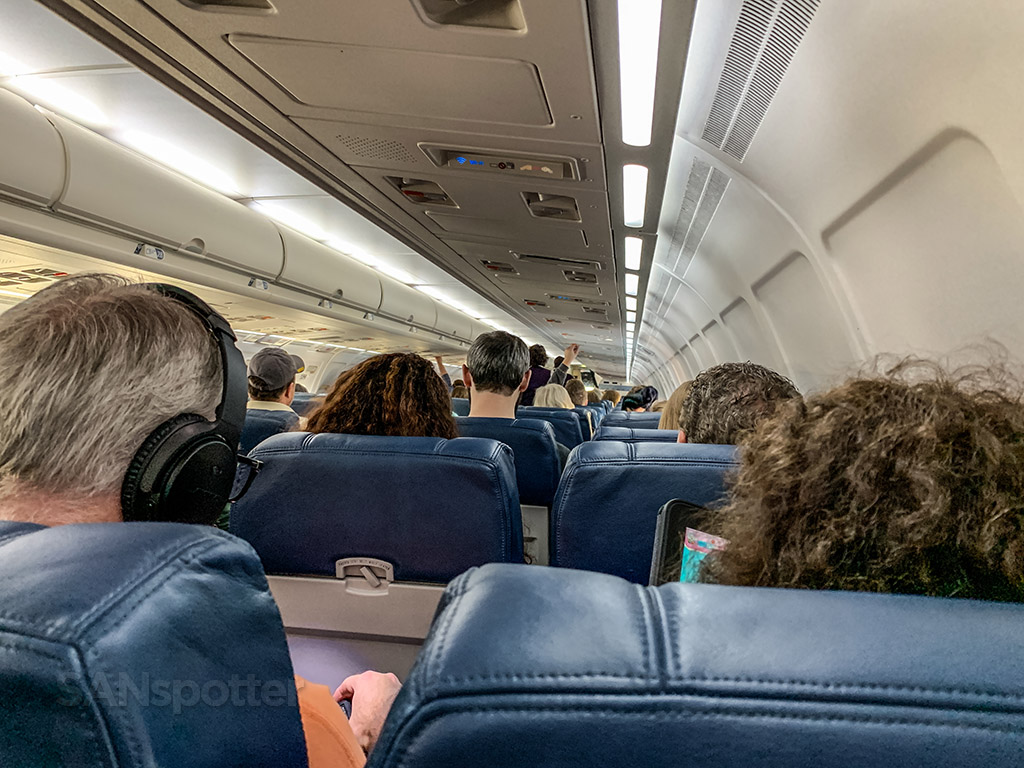 You can’t even see the front of the plane from way back here in row 31! All the better if we slam nose-first into the side of a Florida mountain I guess. It pays to be poor economy class dwellers! 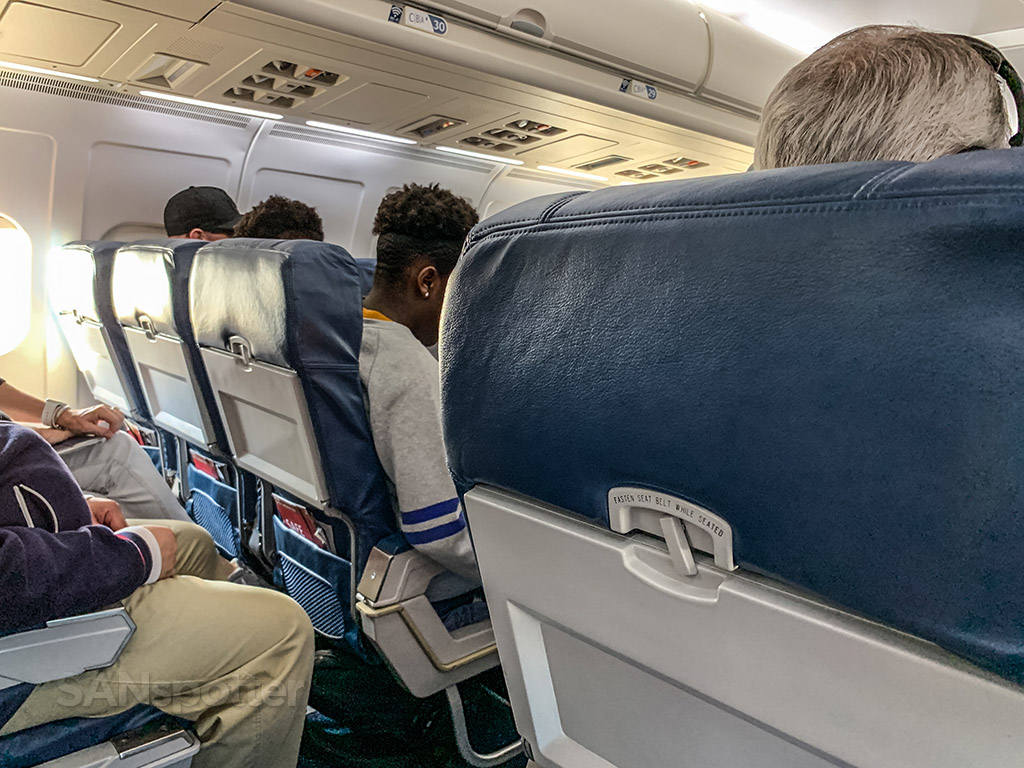 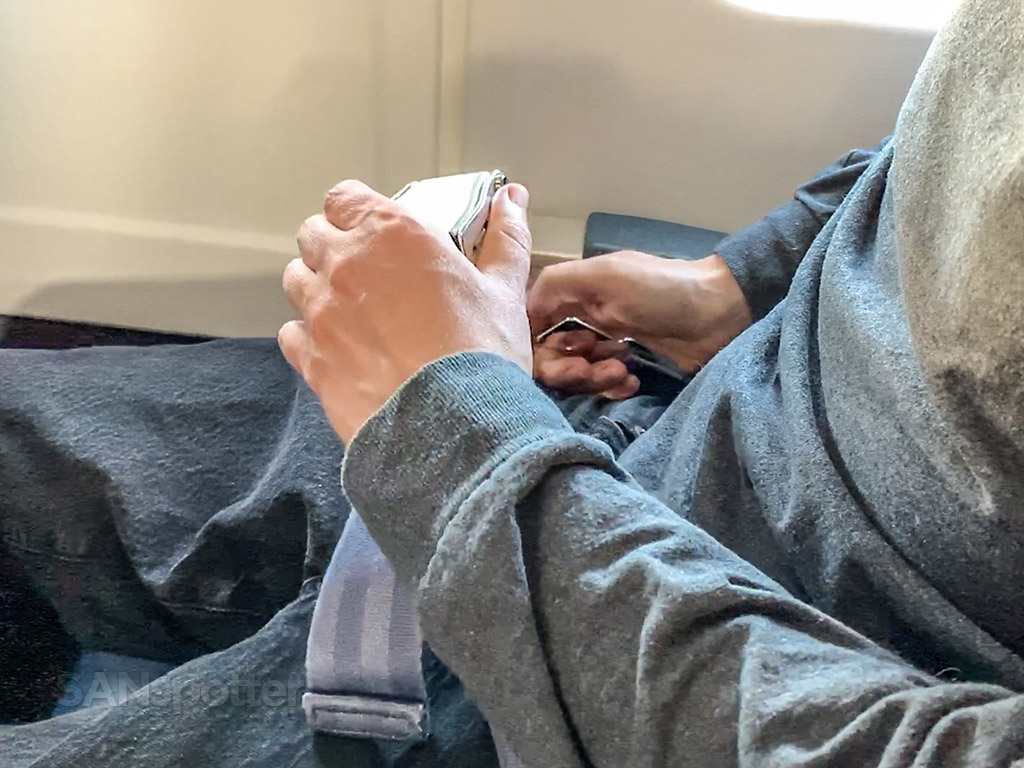 “Insert the flat metal end into the…wait…how does that go again?” 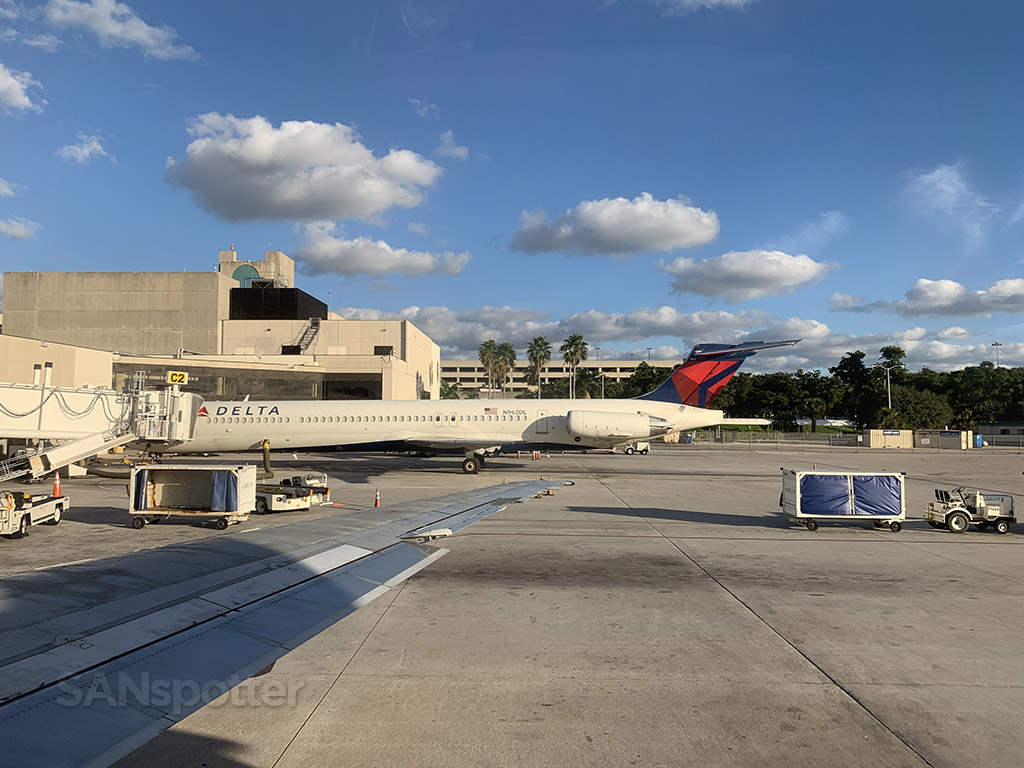 See? This is what I meant about the PBI/Delta MD-88 connection in my brain. There’s always at least one of ’em here. 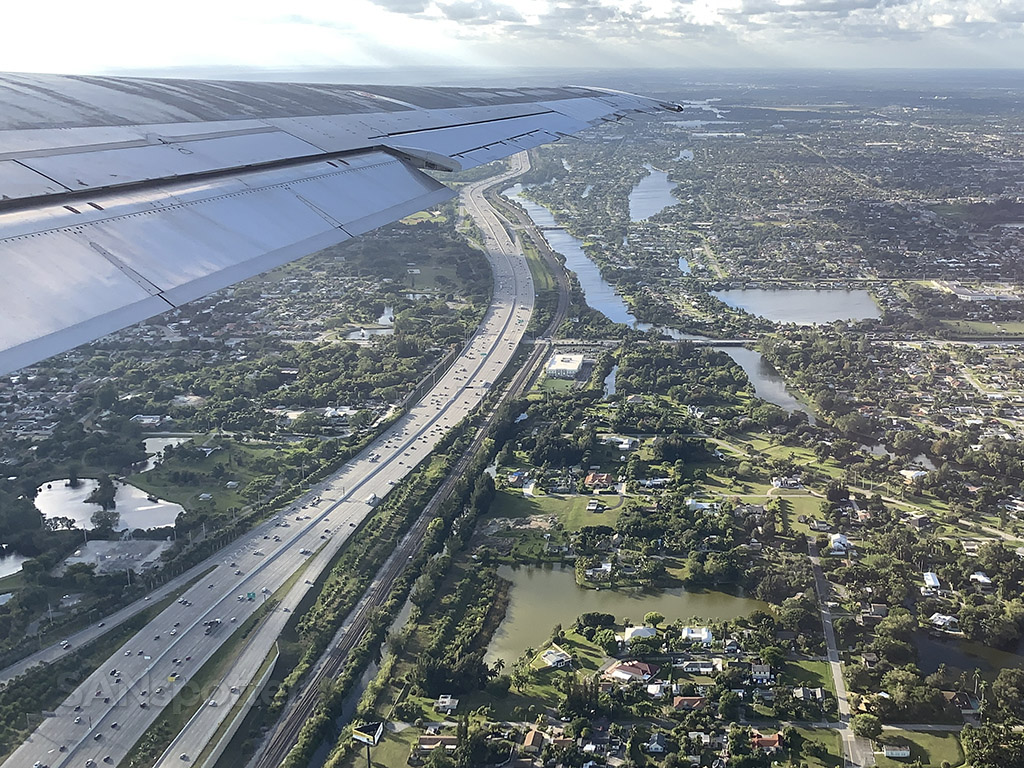 If this were 1978, this would be one of those “Whisperliner” 727’s and we’d be shattering the windows in every house you see down there. Ahh, the good old days. 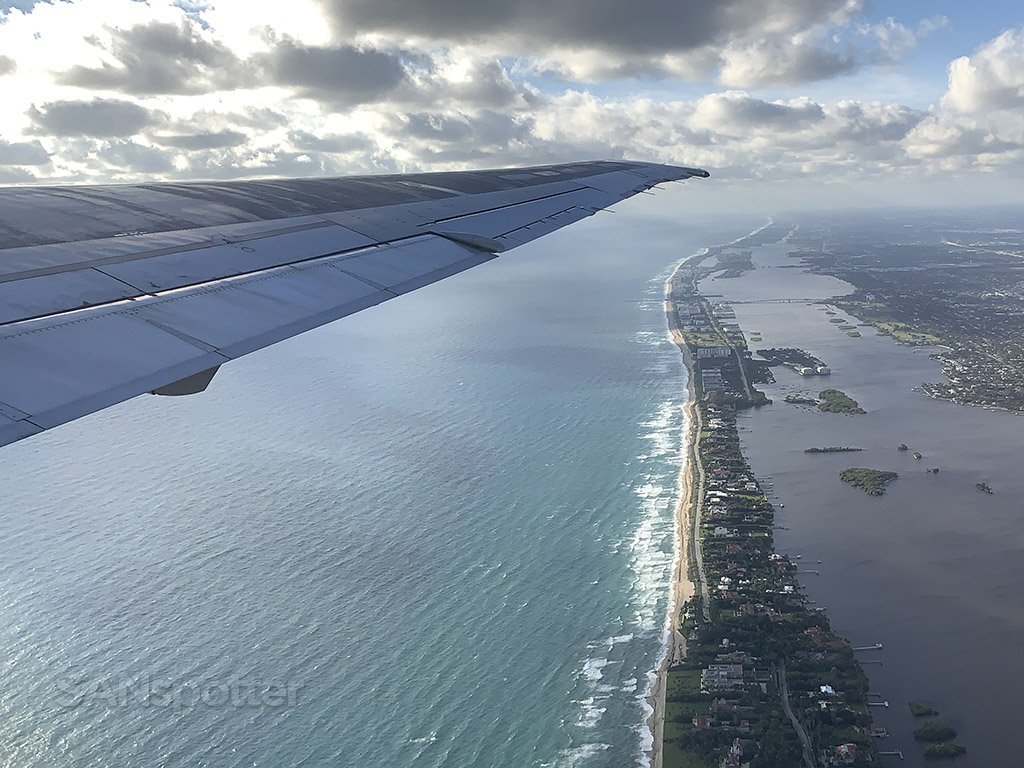 Now I wish this was a 727 instead. Dang it, why did I have to mention the Whisperliner?! 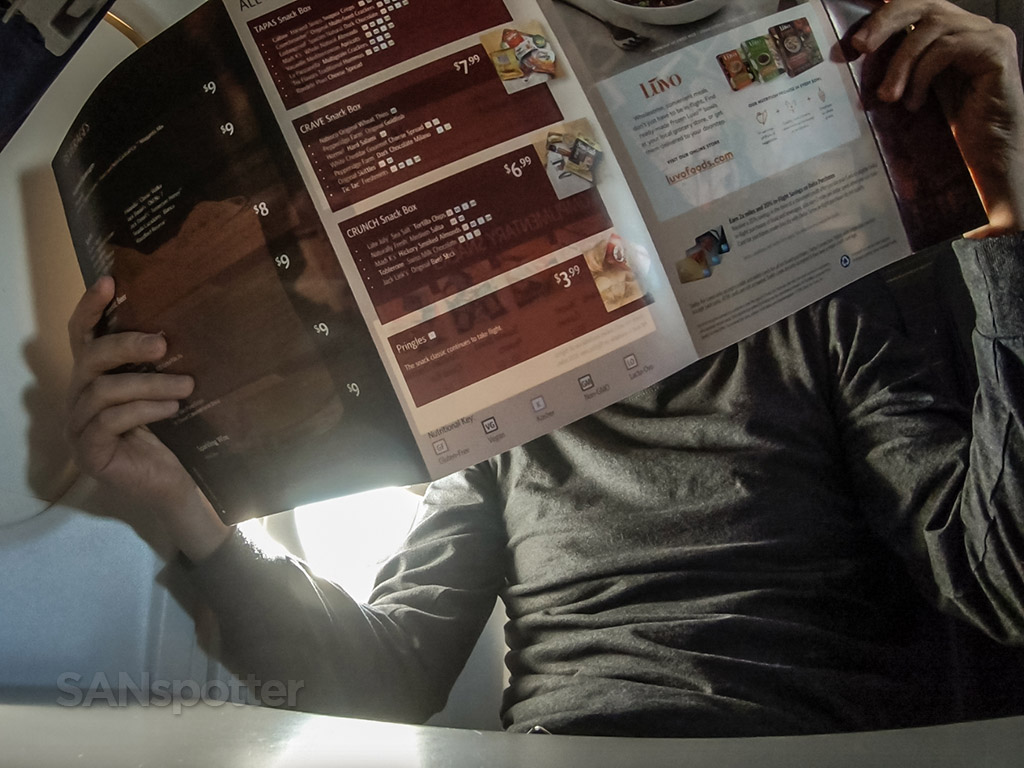 SANspotter hard at work finding the perfect snack for this trip report. 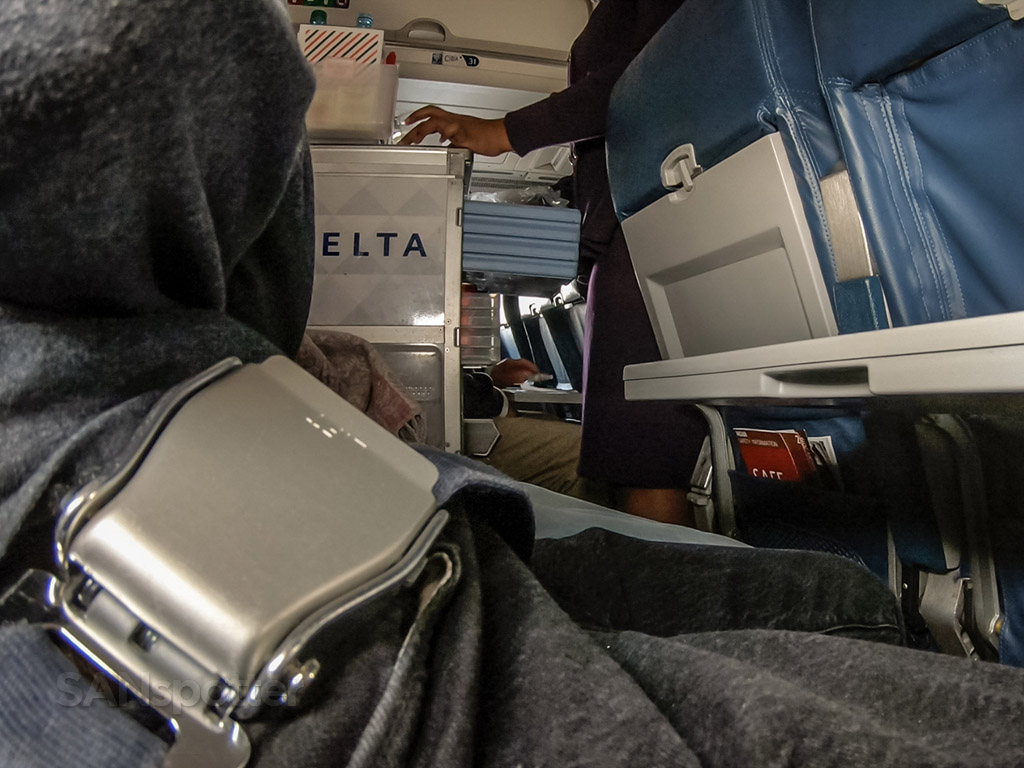 Who else flip-flops on the snack choice in your head a million times until the moment they ask “what can I get for you?” It’s gotta be one of life’s easiest decisions, but I swear it’s as difficult as splitting atoms. 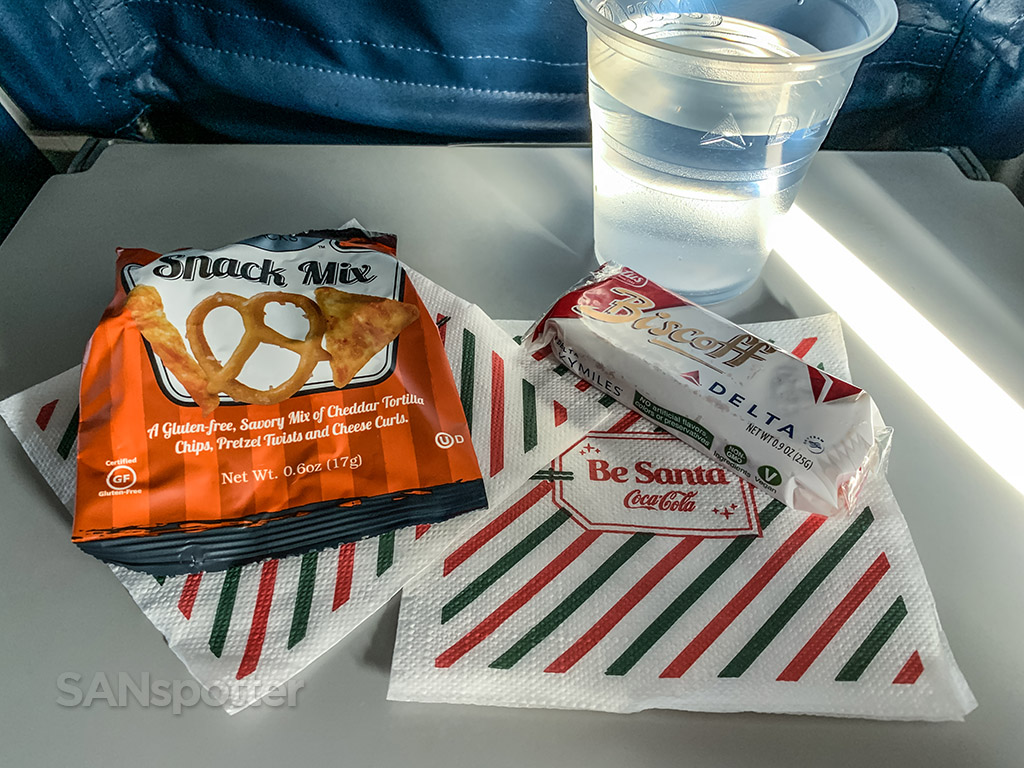 All that studying and I went for the free stuff. Oh well. I’ll be ready and prepared for the next flight! 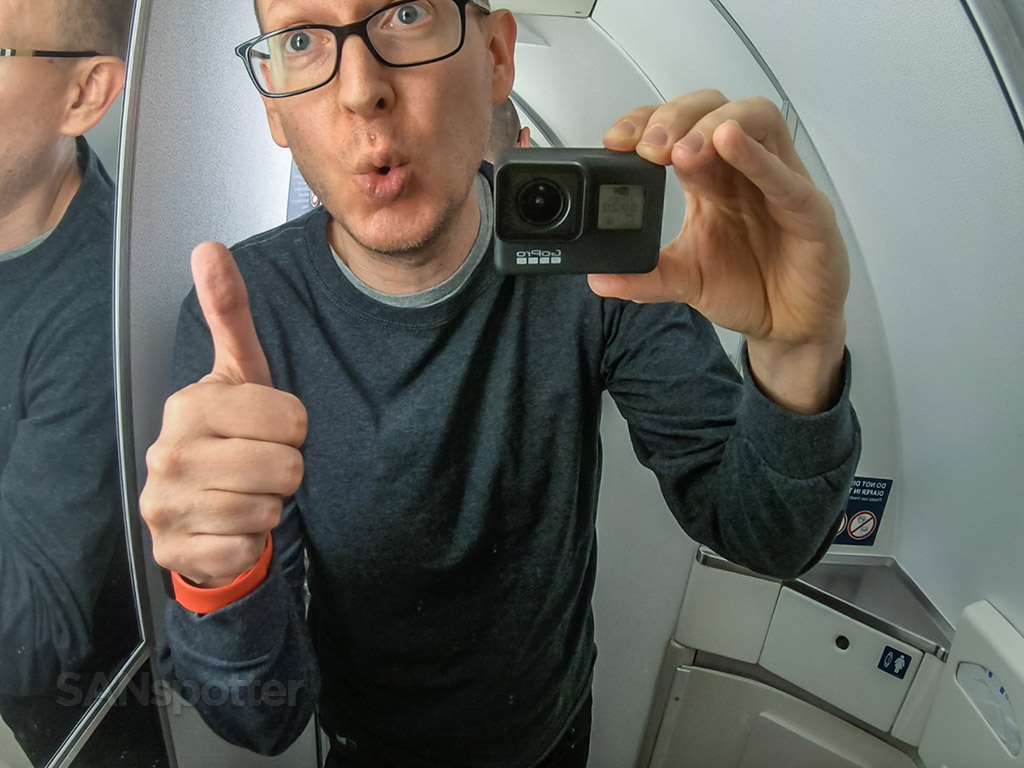 The lavatory was just alright. 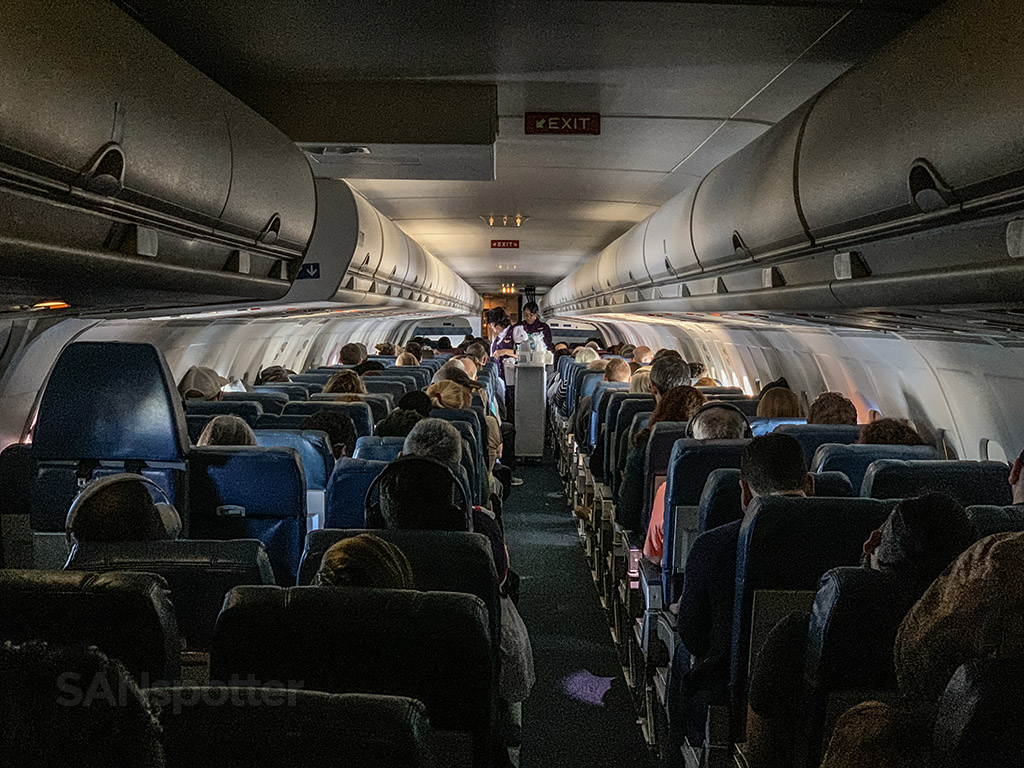 I love the retro vibe of these Delta MD-88 cabins. I don’t love the fact that I might not be able to get back to my seat because of that service cart in the aisle… 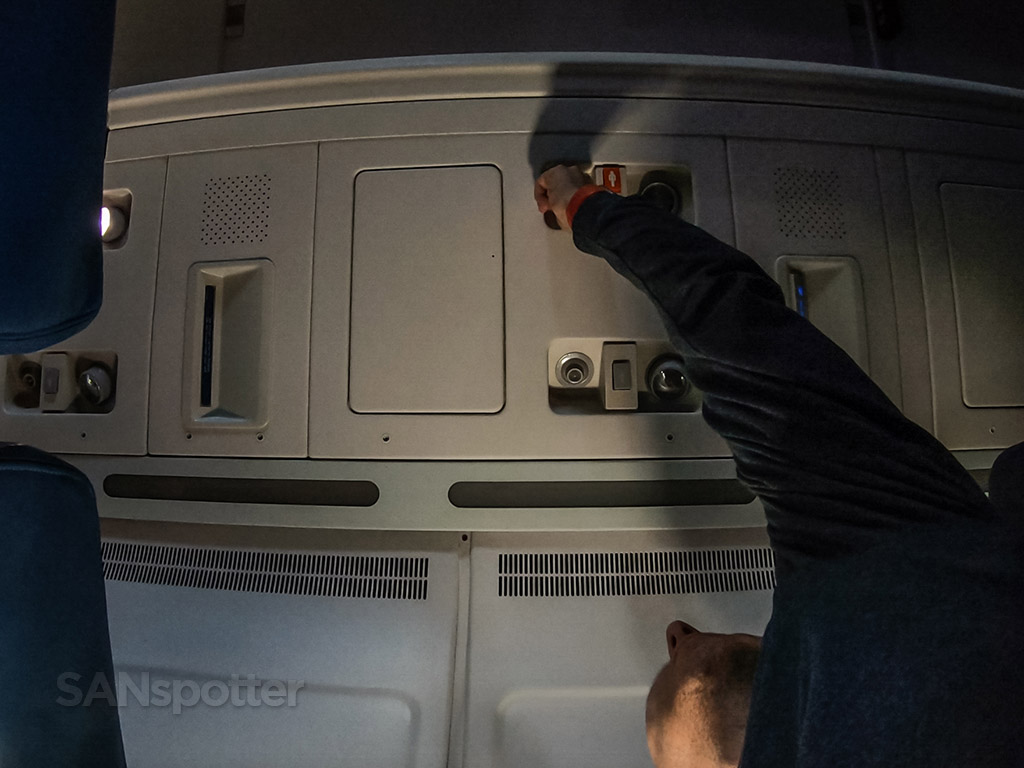 The MD-88 may be old and outdated, but it’s an extremely comfortable and spacious regional aircraft IMHO. “I can barely reach the ceiling” is something I’ve never said while sitting in a CRJ-200.

Anyway, I refuse to say goodbye to the MD-88 right now. Because if I do, it means that I am inadvertently going to find myself on six more of these airplanes between now and the time that they are retired – and you’ll be really sick and tired of every “farewell” post I write leading up to the grand finale. That’s exactly what happened with my last three Virgin America posts (which you can read here, here, here, and here) and I’ve got a sneaky suspicion that I jinxed myself for saying goodbye so early to that airline. 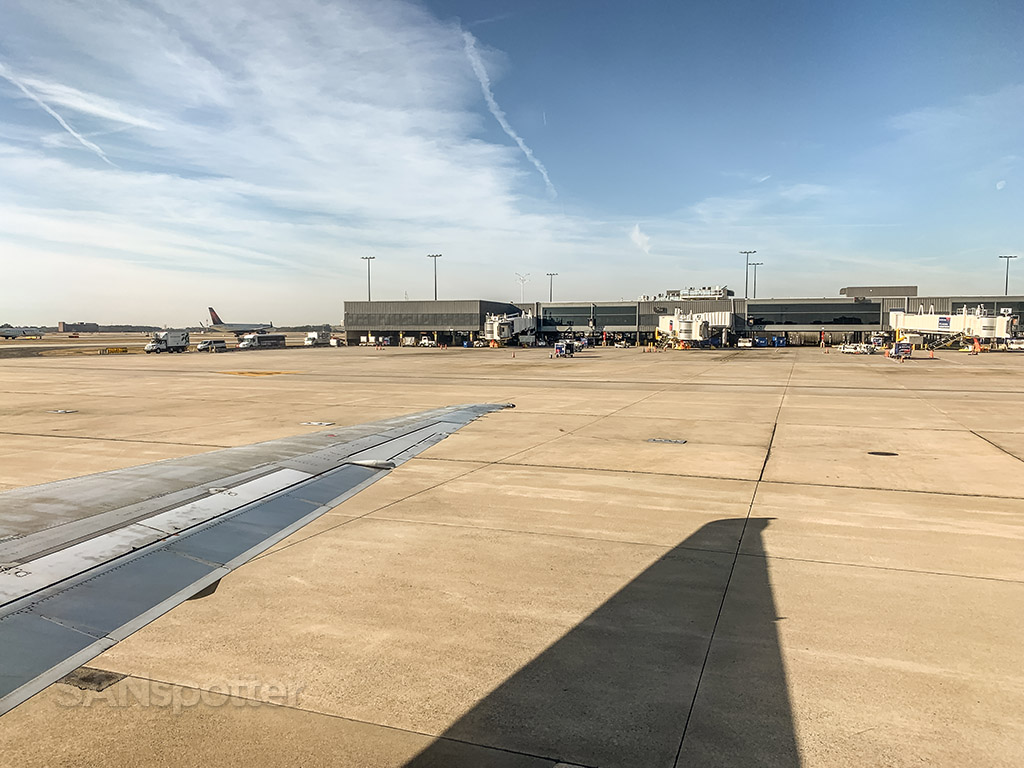 Pulling up to the gate at ATL in what might be the last time ever on a Delta MD-88. Maybe. Probably? I don’t know… 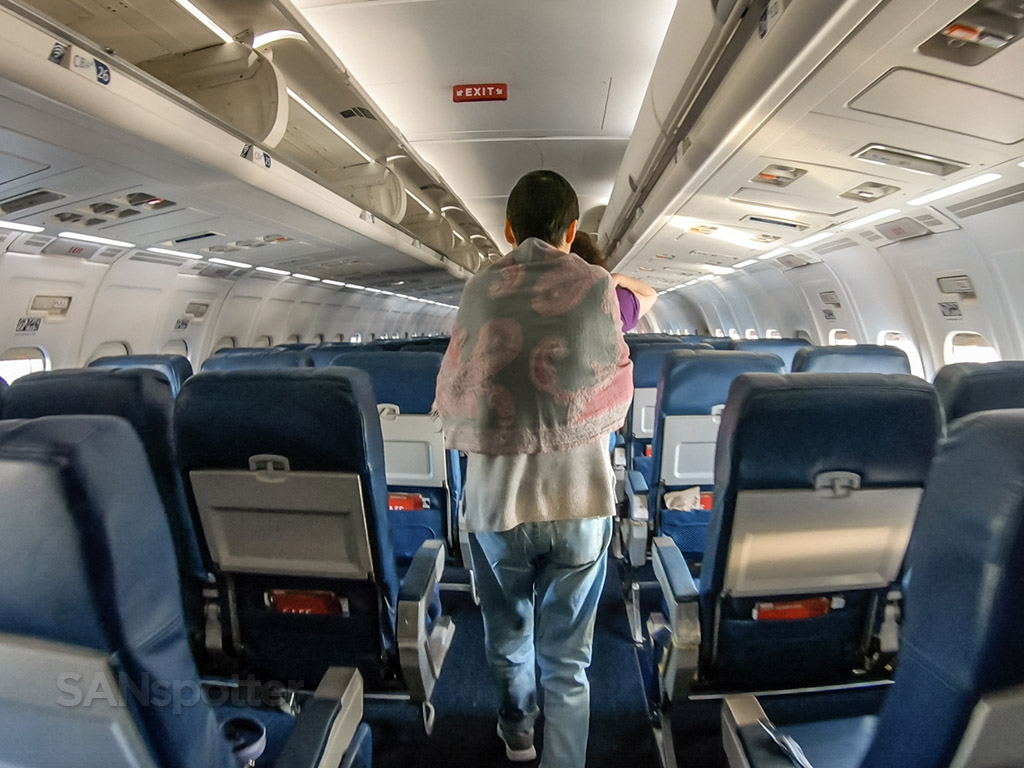 I would have walked slower to savor the moment if it weren’t for the fact that there were 20 people behind me who weren’t going to let anything get in between them and their connections. “Run the AvGeek over! Nobody likes his stupid trip reports anyway!”