Some may say that an airline’s reputation is forever ruined after an incident of some kind, but for the most part, I’m not one of those people. Maybe it’s because I’m so passionate about air travel and the business of commercial aviation, but my line of thinking has always gravitated towards the idea that **** happens sometimes and it’s not like the airlines are trying to kill us or anything. Even in the cases where a crash was deemed to be deliberate (Egypt Air 990 for example), I’m not the type of guy to hold a grudge and avoid a particular airline for eternity.

Despite my forgiving attitude towards mistakes, Air Transat is the only airline in existence that has spooked me in a way that I’ve never been able to shake. The incident involving flight number 236 happened well over 17 years ago, but for some reason I still felt a twinge of hesitation before booking this particular flight to Montreal.

I think the issue I’ve been struggling with all these years (among others lol) is the fact that the entire incident played out like a well-scripted Hollywood thiriller that would have had an entire audience gnawing on their fingernails and sitting on the edge of their seats. I can’t imagine how horrific of a feeling it must have been to realize that you’re out of gas out over the North Atlantic Ocean, and…uh…I’m just going to leave it at that so I don’t end up too flustered to type.

All you really need to know is that I found the courage to face my fears and give Air Transat a try. Yay me!

Seat map of this Air Transat A330-300 (courtesy of seatguru.com) showing my seat (44K) for this flight to YUL. 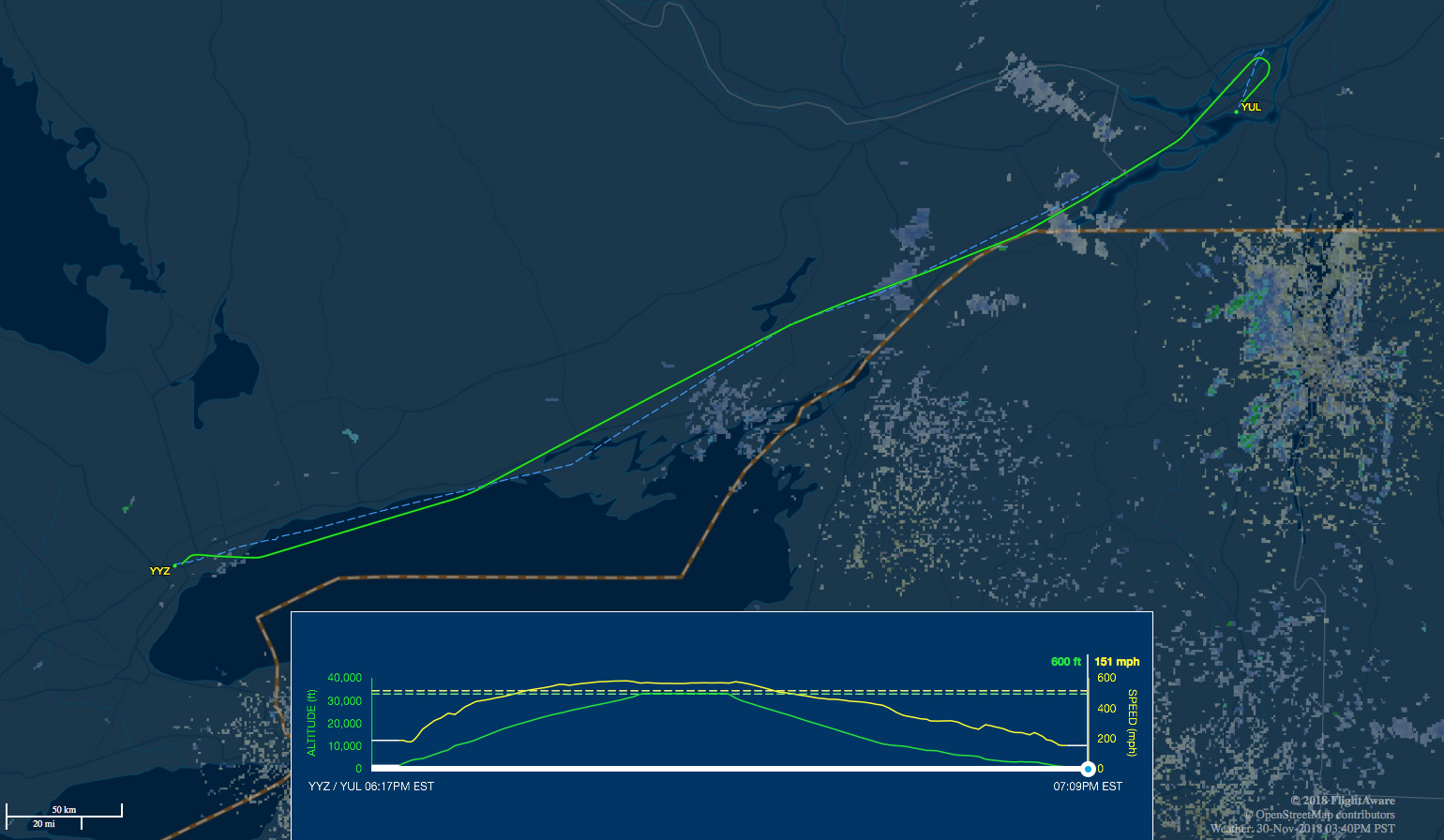 Our route from YYZ to YUL this evening: DEDKI4 MIGLO HABBS4

Those of you clamoring for a detailed description of this journey to Toronto to Montreal can see it all in the video I created (below). A word of warning though: You may find yourself with a craving for corn chips, apple juice, and broccoli while watching this, so I’d recommend having those items at the ready as you watch.

As always, a huge shoutout goes to Epidemic Sound for providing the soundtrack. If you’re a YouTuber looking for amazing music for your videos, they’ve got what you need!

Here are 4 really neat things about this Air Transat A330-300 flight to Montreal:

The truth is that I’ve got a lot more than 4 things I want to talk about, but for the sake of brevity I’m going to keep this list short and sweet so as not to turn this into a total airplane-nerd bore fest…

Part of the reason why I found the courage to give Air Transat a try is because they’ve still got a sizable fleet of A310’s and I’ve got a really bad hankerin’ to fly on one of them before they’re all gone. They’ve still got 7 in active service the time of this writing, which might not sound like a “sizable fleet” to most – but I’m willing to call it that considering that there are only 29 left in the entire world. It’s a rare airplane.

This particular flight from Toronto to Montreal is one of the last remaining A310 routes, and as a matter of fact, booking a ride on one was the primary purpose of this entire trip. I was so proud of myself for booking a seat on such a rare bird, but I couldn’t have been more disappointed to discover that they swapped my particular flight to an A330. 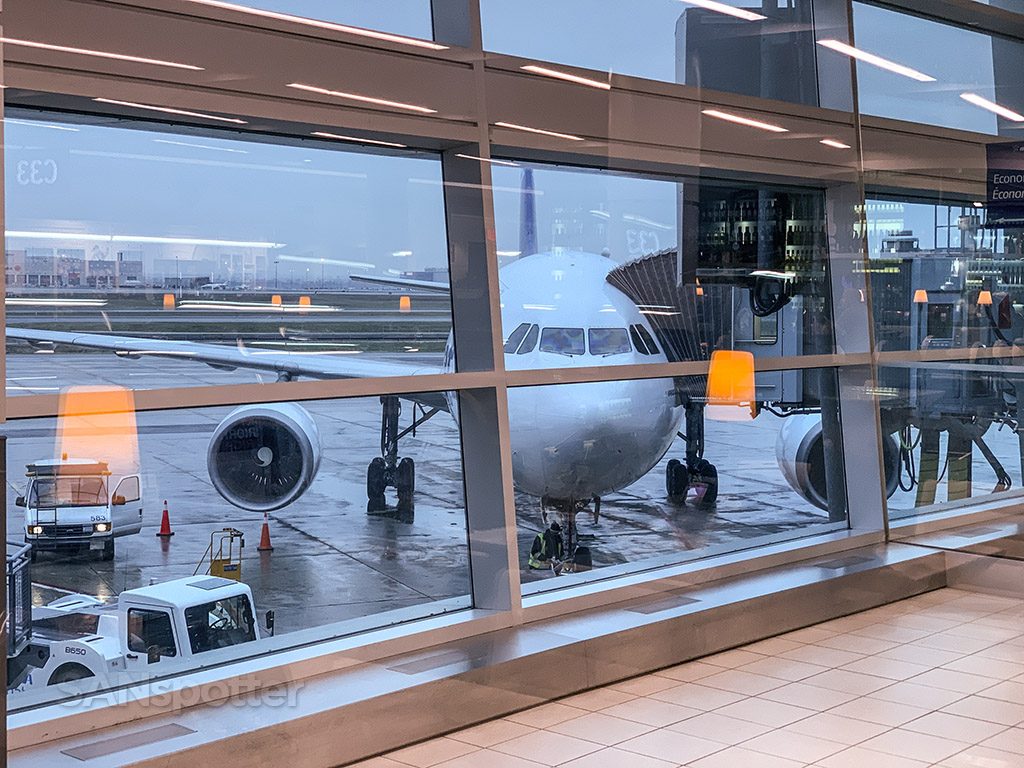 So close, but yet so far. Of course I realize that a ride on an A310 might have meant dealing with sticky seats and weird smells, but I came here fully prepared for that. I wanted a ride on this airplane! 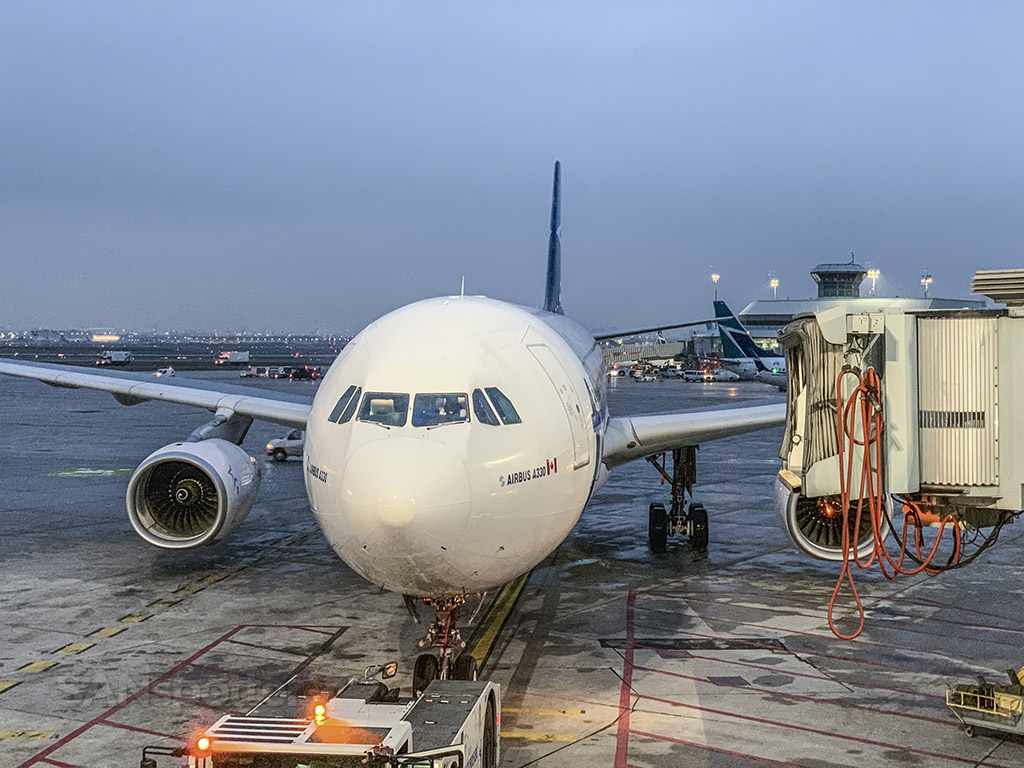 Normally I’d pee my pants with excitement for having the opportunity to ride on an A330 on such a short route, but…I wanted that sticky and stinky A310 dammit! 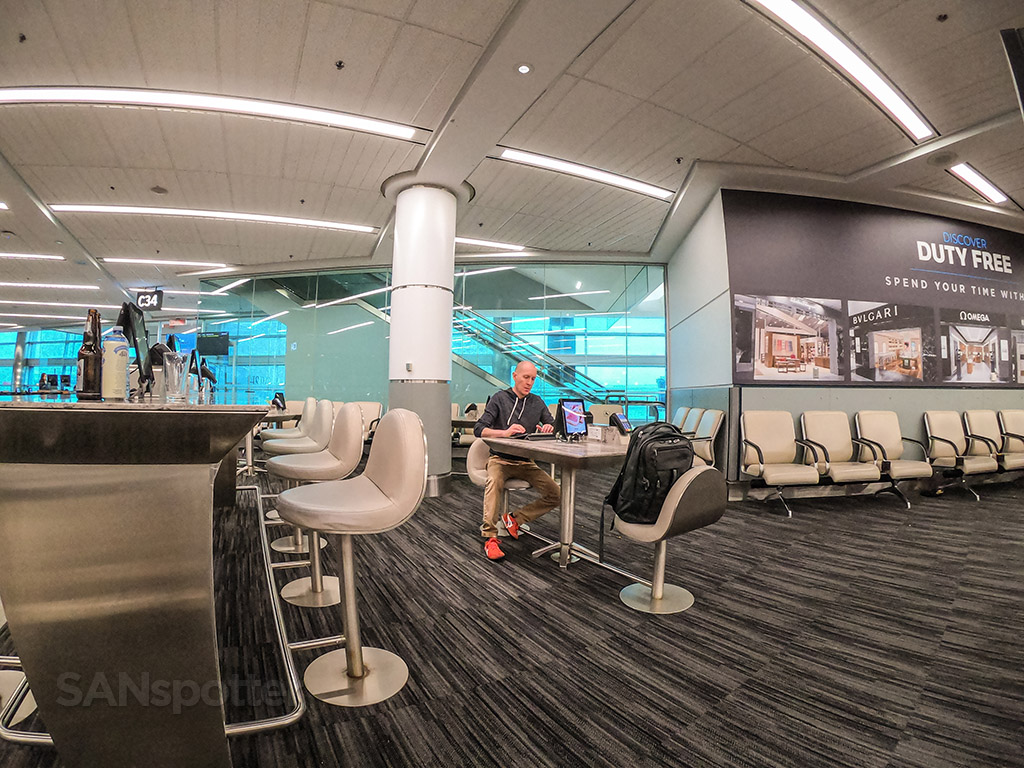 Wasting no time in writing Air Transat a strongly-worded letter about annoying aircraft swaps? Not really, but this pic fits the point I’m trying to make about being bummed about not getting a ride on an A310 tonight. lol 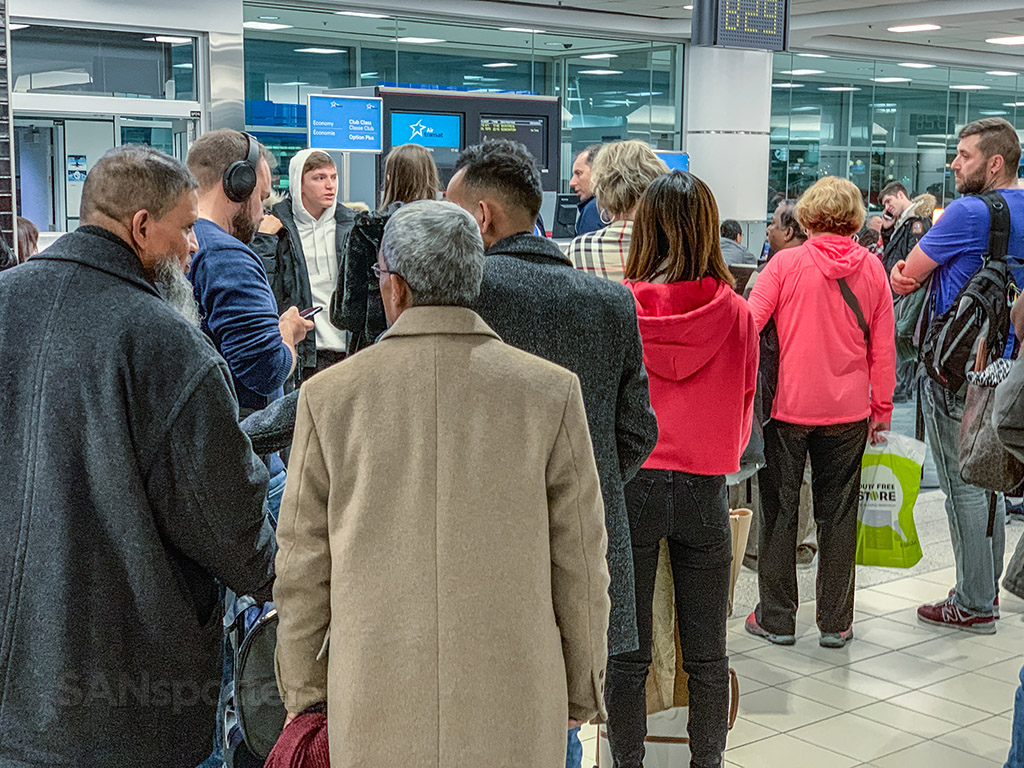 Guy in the white hoodie looks as miffed as I am that there’s an A330 parked out there. But for everyone else, this is just a boring ‘ol flight to Montreal (non-AvGeeks are weird like that).

Ok, I know that aircraft swaps happen all the time – but why did it have to be this one? Looking at the schedules for flight 471 over the next few weeks, I’m seeing that it’s still operating as an A310. Does that mean that I’m going to have to try again? Maybe…

As an American who has doing his best to avoid Air Transat over the years, I didn’t realize just how lucky I was to find myself on an A330-300 in their newest configuration for this short hop over to Montreal. It wasn’t until I returned home from this trip when some of my Canadian aviation friends informed me that I was basically as lucky as a lobster in the kitchen of the Titanic for getting a ride on this particular bird, because it featured their newest 2-4-2 layout in economy class (which is a huge improvement over the old 3-3-3 layout). 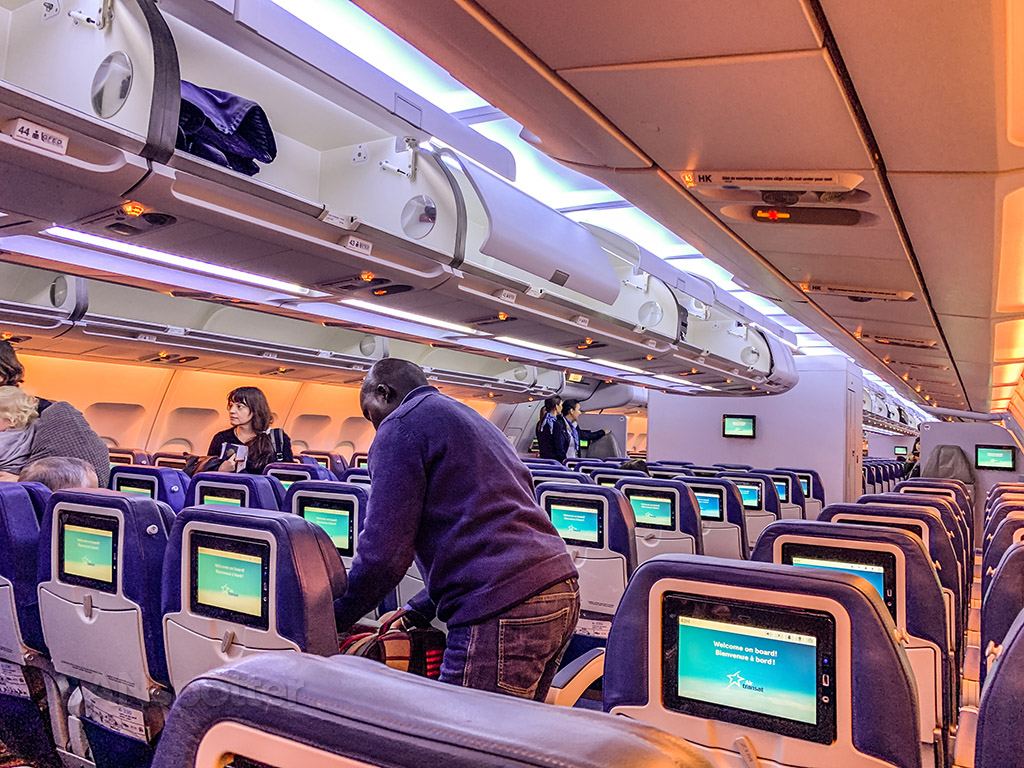 Color me impressed! Air Transit is doing really good things with their cabin refresh program, and first impressions were good. “New interior smell” is a lot more pleasant than “crusty old A310 guts” – I’m sure of it. 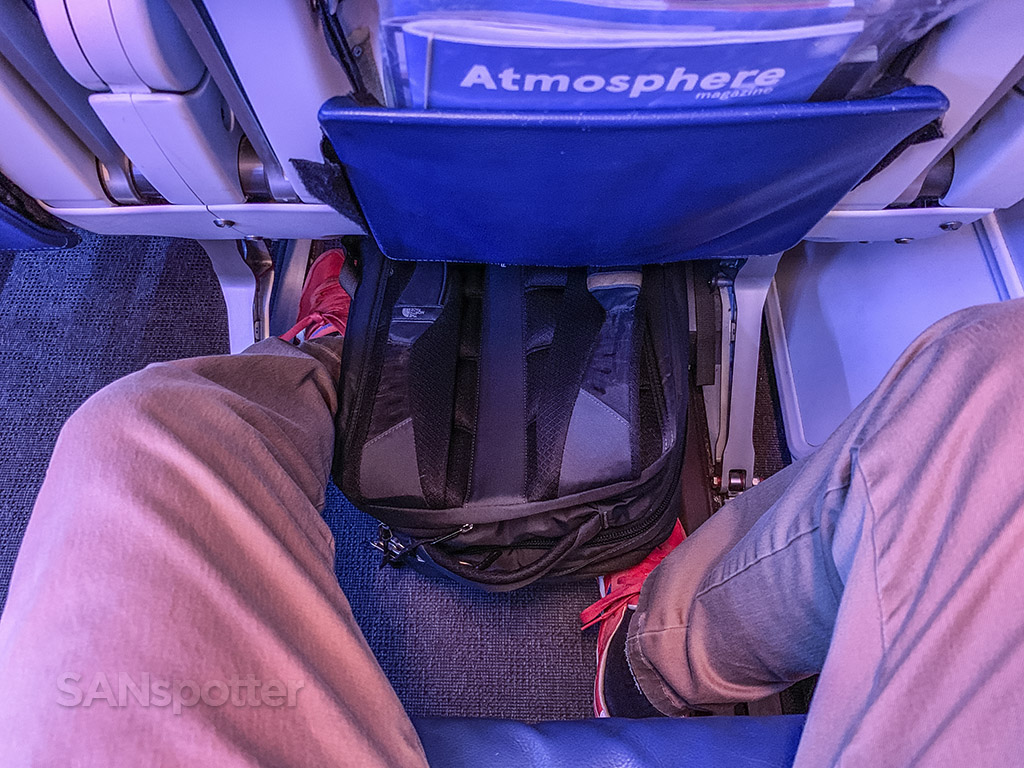 Tons of “atmosphere” between my knees and the seat in front of me. See what I did there? I really hope so, because I’ve been writing trip reports long enough to know that there’s only so much that can be said about a run-of-the-mill seat pitch pic. 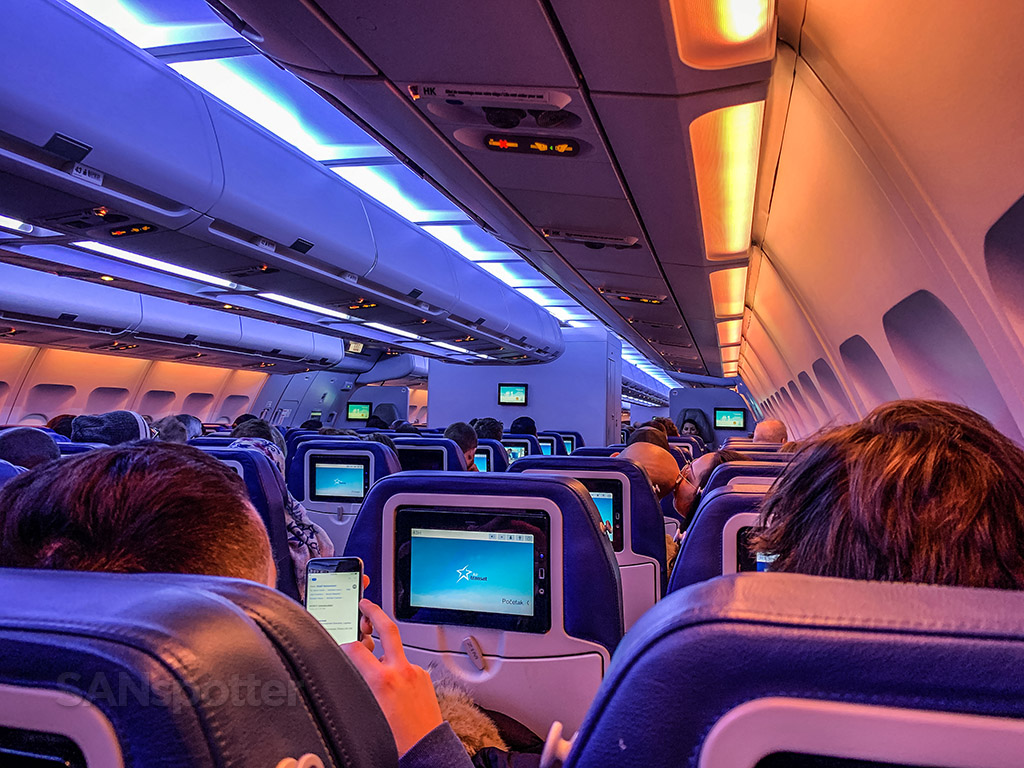 Large video screens at every seat, and we’re all still looking at our mobile phones. How long until the airlines realize this and decide to ditch the screens all together?

This new layout is a really comfortable configuration. So comfortable in fact, that I’m even tempted to do a long transatlantic flight in one of these birds (assuming they’ll let me double-check fuel loads before sitting down).

3. The mood lighting was so rich that I thought I was going to be stained purple

If you’ve been reading my blog long enough, you’ll know that I’ve got a bit of a mood lighting fetish. Virgin America has me gushing with delight every time I step onto one of their airplanes, Hawaiian Airlines has really good mood lighting game now with their fancy new A321’s, and I was happy as a tornado in a trailer park to see the neon red glow in Asiana A380 business class. 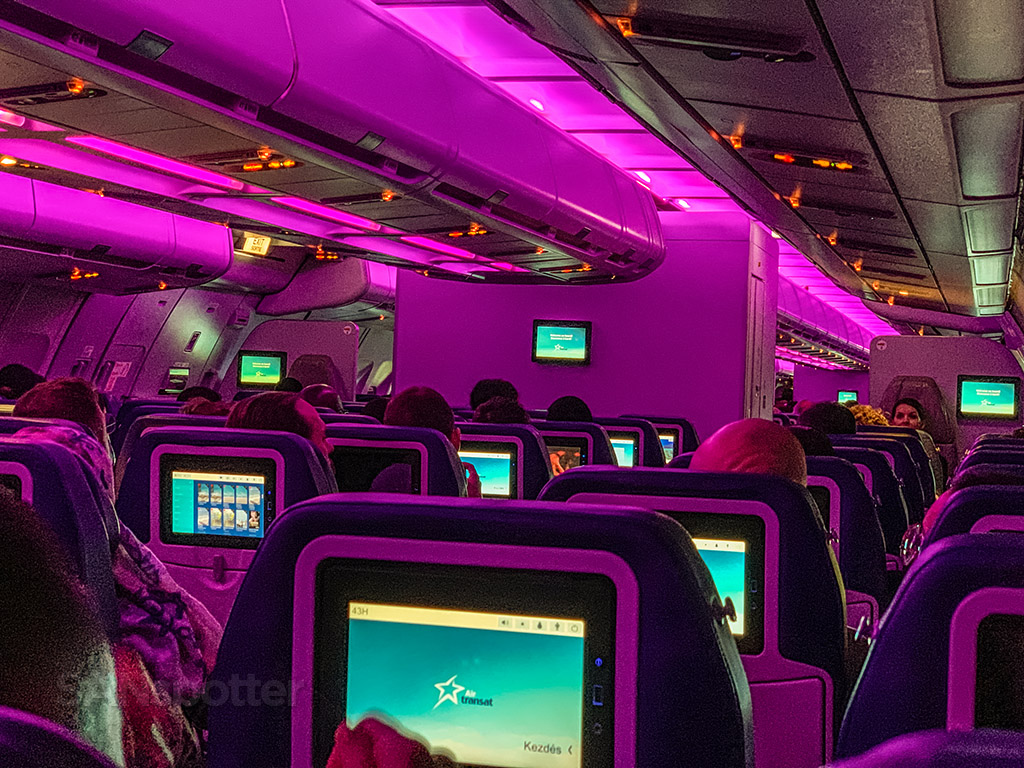 How is it possible to be exposed to this kind of light and not end up walking off the plane at least two shades of purple darker? I don’t know about you, but I could certainly use a little more purple in my complexion.

Maybe it was because I was expecting a ride on a dumpy old (but still beautiful) A310 tonight, but it was really surprising to see how hip and modern the latest Air Transat A330-300 is with all that beautiful deep blue and purple mood lighting.

4. The flight attendants served beverages to an entire A330-300 with plenty of time to spare

This is a point I find interesting because there are so many other airlines **cough**United**cough** that don’t serve anything on flights of similar length. The fact that this Air Transat crew served everyone (with plenty of time to spare) had me scribbling happy thoughts into my notes, and having the time to enjoy a drink made the flight so much more enjoyable. 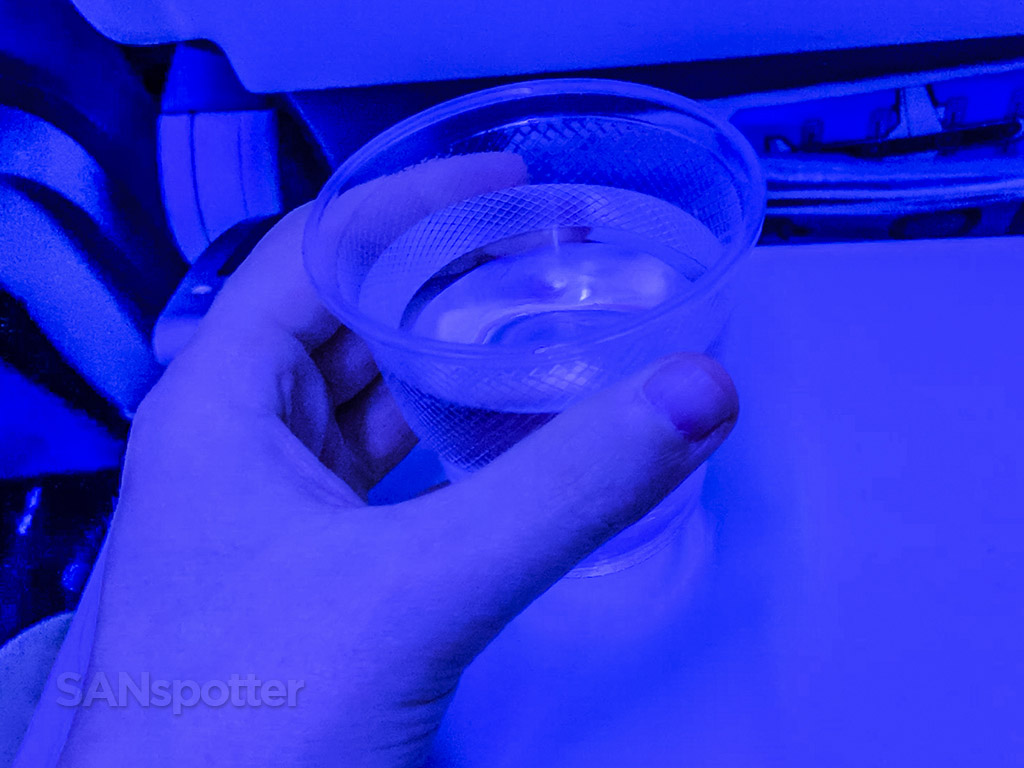 I’ll admit it. It was a real struggle for me to try and decide if I wanted to use this pic for the “mood lighting” section, or for this section about the in-flight service. I mean, the service was good and all, but…dear God that mood lighting was on point!

Speaking of service, I’d like to point out that the food-for-purchase menu here on Air Transat looked impressive (to say the least). 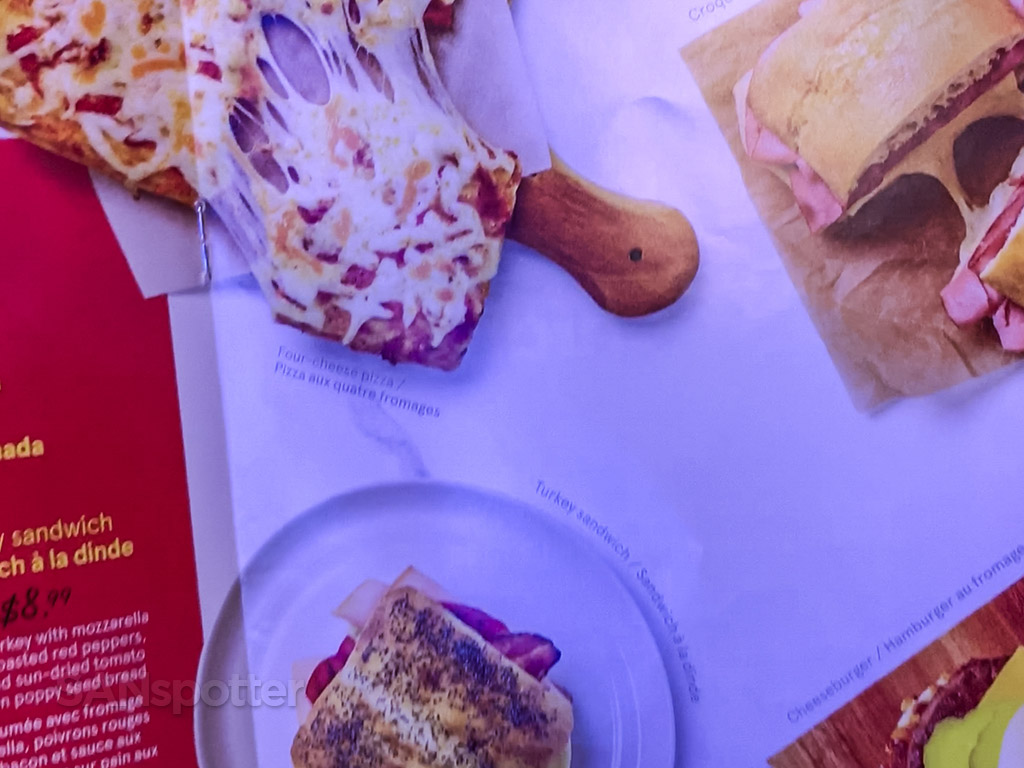 Heart-clogging deliciousness right there. Compare this with the menu in Icelandair economy class, and, well…you’d probably live longer eating Icelandair food, but you’d die happier having lived your life on an Air Transat diet.

This flight was too short to be able to sample anything from the menu unfortunately. It was getting late, my stomach was grumbly, and looking at pictures of food with gooey melted cheese wasn’t easy.

Because this post even exists at all means that I survived (and that’s all that really matters). We didn’t run out of fuel on the way to Montreal, there was no nail biting Hail Mary glide into the Azores, and I walked off this airplane feeling a confidently strong urge to spend more time on Air Transat.

I wonder what other illogical fears I’ve got packed away into my brain that need to be resolved? 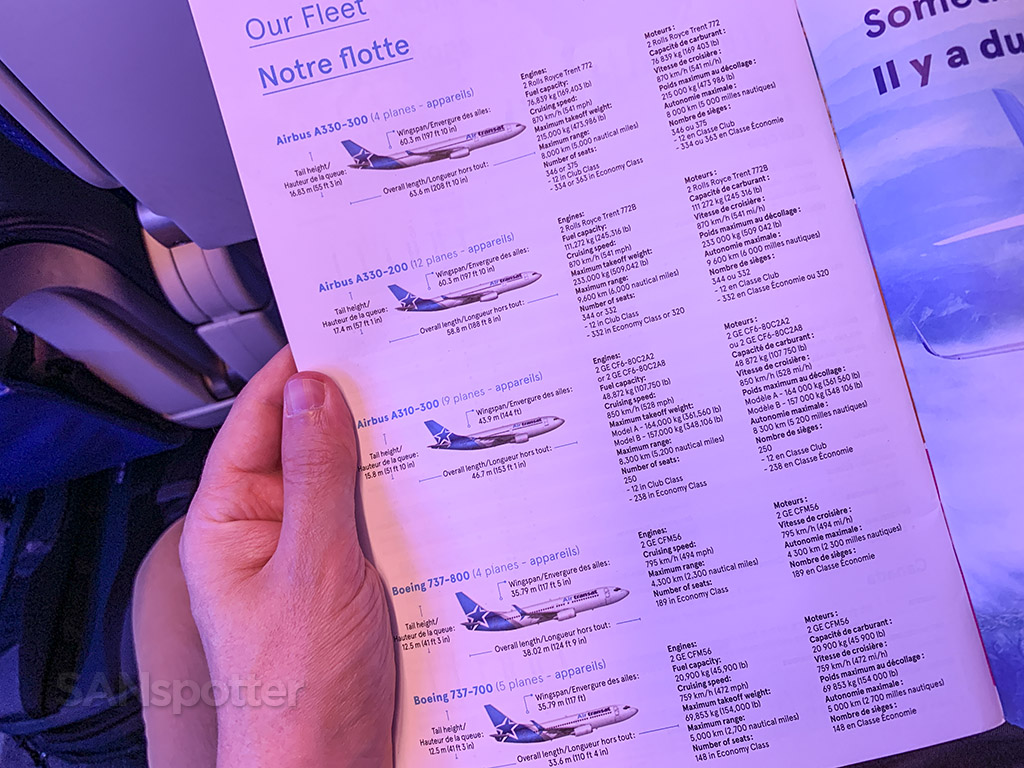