If you’ve been getting totally sick of me touting the benefits of Priority Pass for the past few months, just know that it’s for a very good reason. Having access to thousands of airline lounges in airports all over the world (even when I’m not flying business class) has completely transformed the way I travel, and I’d even argue that my annual membership has paid for itself multiple times over.

Food has always been one of my biggest expenses while traveling, and having the ability to pop into the nearest Priority Pass lounge or restaurant for a bite to eat (at no cost) has saved me hundreds of dollars so far this year. I’m all about saving as much money as possible now that I’m self employed, so I tip my hat to the fine people of this SkyTeam lounge here at YVR for filling my belly with delicious food before hopping on the Philippine Airlines 777-300 to JFK. And let’s not kid ourselves here – it just feels good sitting in an airport lounge while waiting for a flight. Don’t pretend it isn’t true! 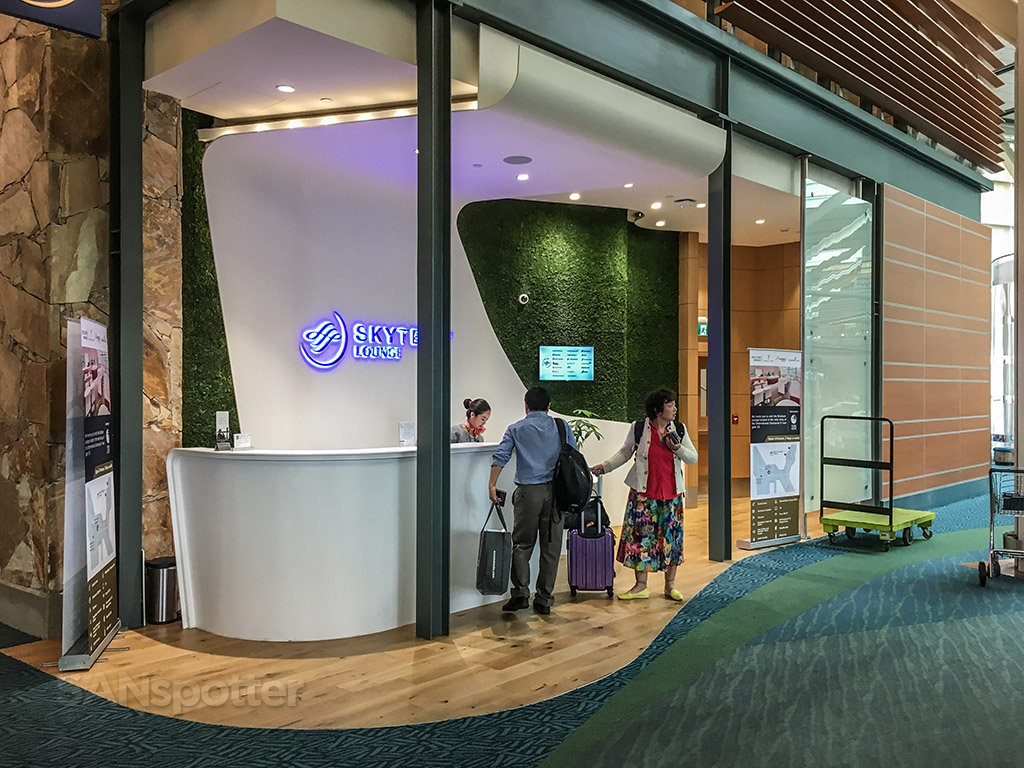 This is definitely one of the swoopiest airport lounge entrances I’ve ever seen – a clear sign that there’s lots of good stuff inside! 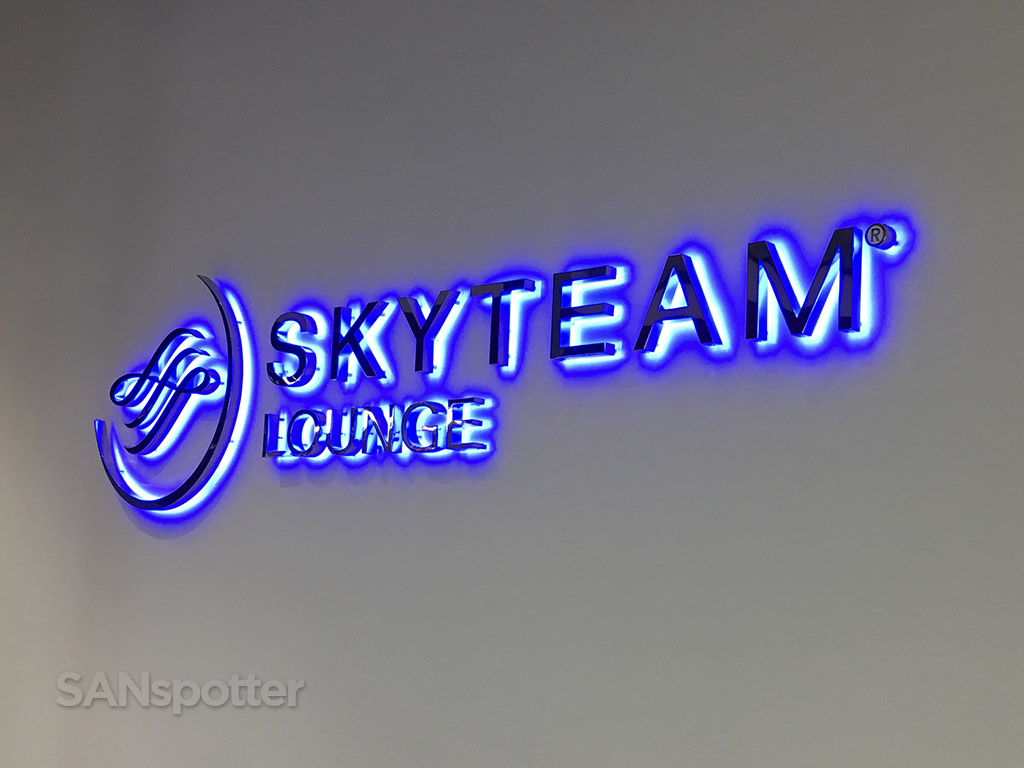 All of those neon Bud Light signs I’ve seen over the years have obliterated any associations I had with neon signs and the word “class”. Neon signs look cheesy to me, but I’ll admit that the swoopiness of the exterior of this SkyTeam lounge makes up for the cringe.

It should be noted that all Philippine Airlines business class passengers have complimentary access to the Plaza Premium lounge here at YVR (located on departures level 3 right after security), so even if you aren’t a member of Priority Pass, you’ll still the the opportunity to feel important in a lounge before your flight. It just so happens that I’ve heard really good things about this particular SkyTeam lounge (located on level 4 between gates 52 and 53) and I really wanted to check it out for myself. 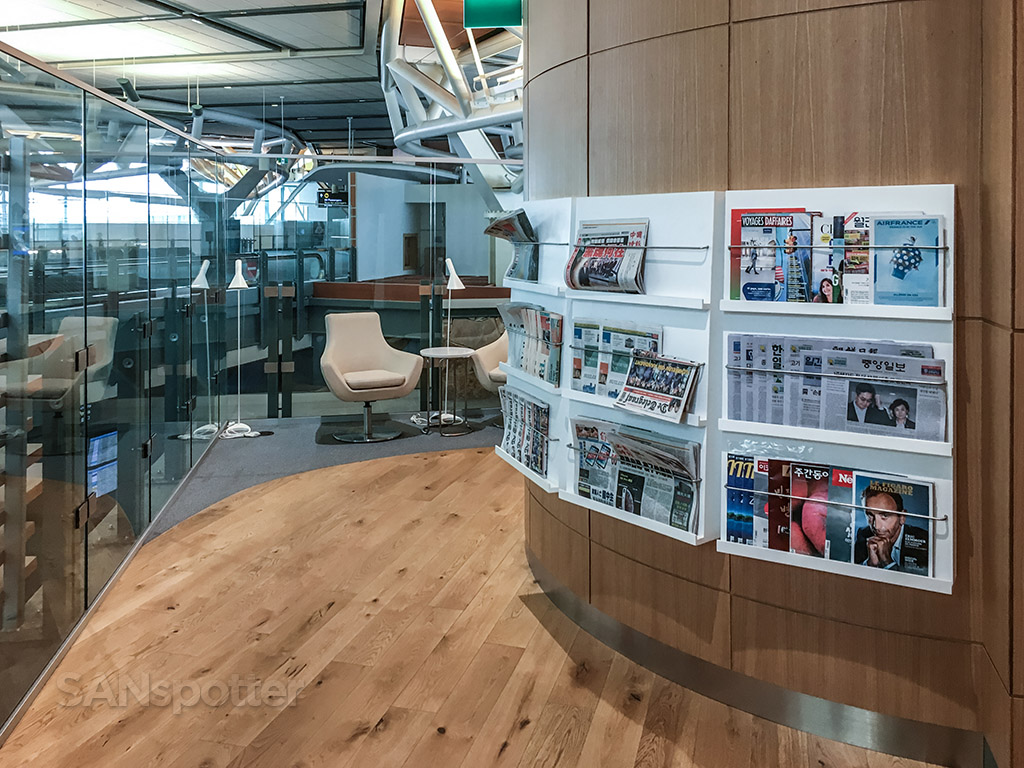 Stepping off the elevator to the 4th floor, and…wow! Nice to see that this lounge isn’t just a series of connected boxes (such as the Delta Sky Club at JFK). 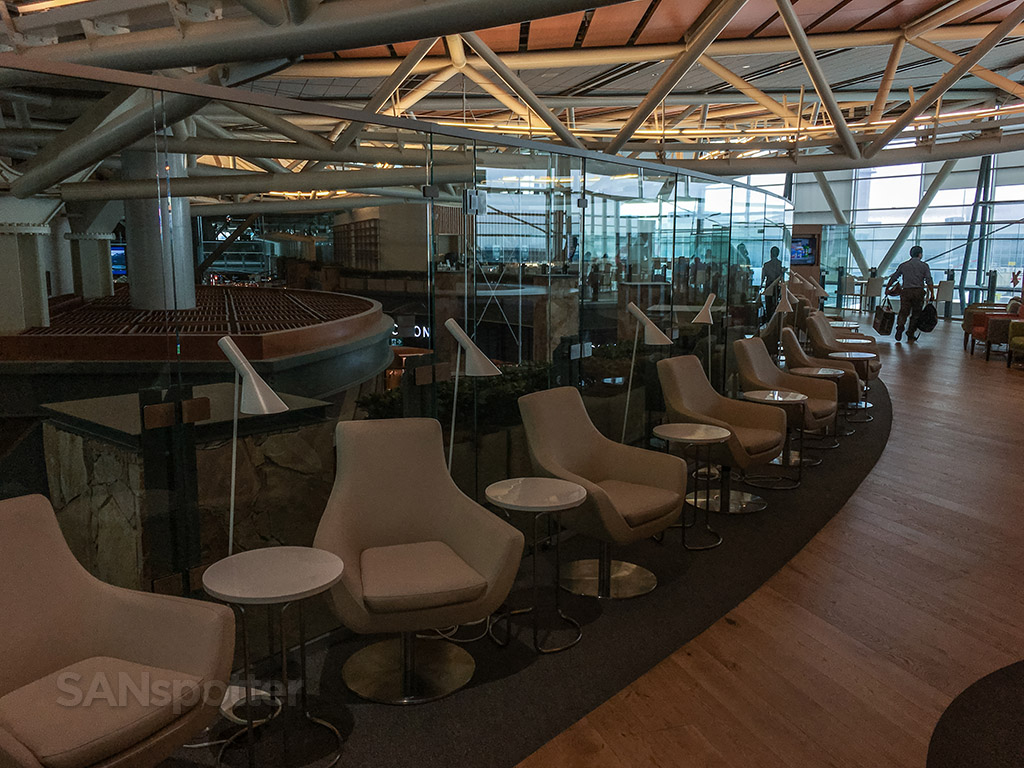 Walking into the lounge now, highly appreciative of the fact these chairs were empty. How awkward would it have been for everyone to stop what they were doing to watch me walk in (like an outlaw walking into a bar in a western movie)? 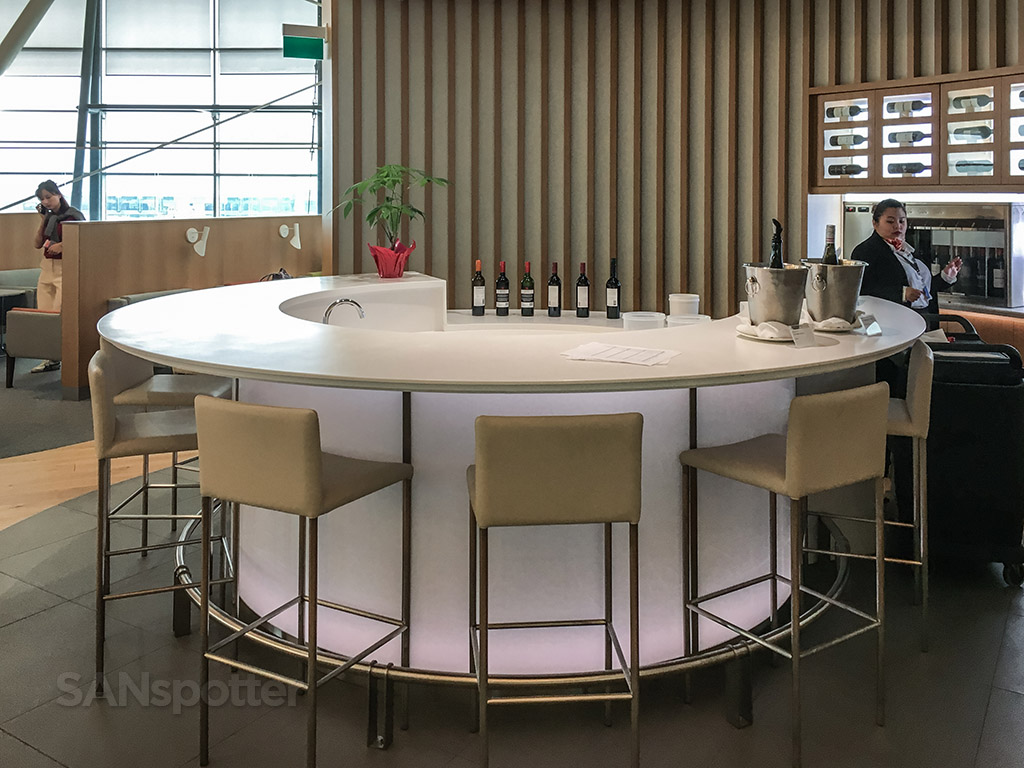 Speaking of the bar, there was no friendly bartender to greet the patrons. You’d never see such a thing in an old western movie! 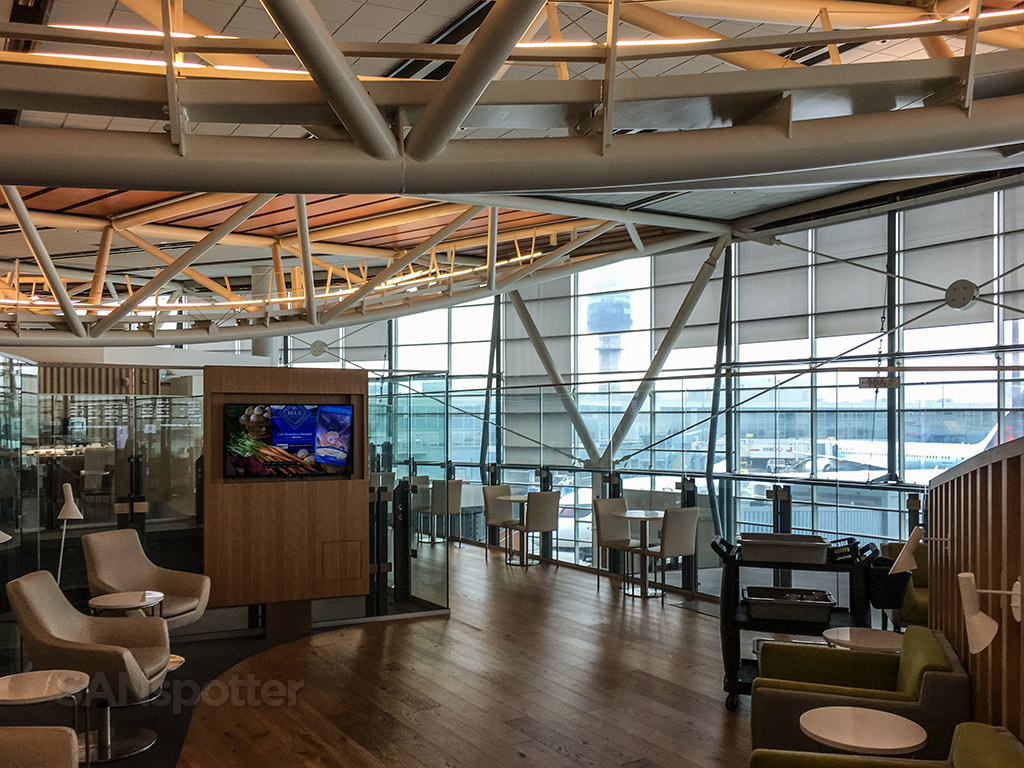 Enough talk about old western movies. That walkway to the left is where the food is, and I’m about to mosey on over that way… 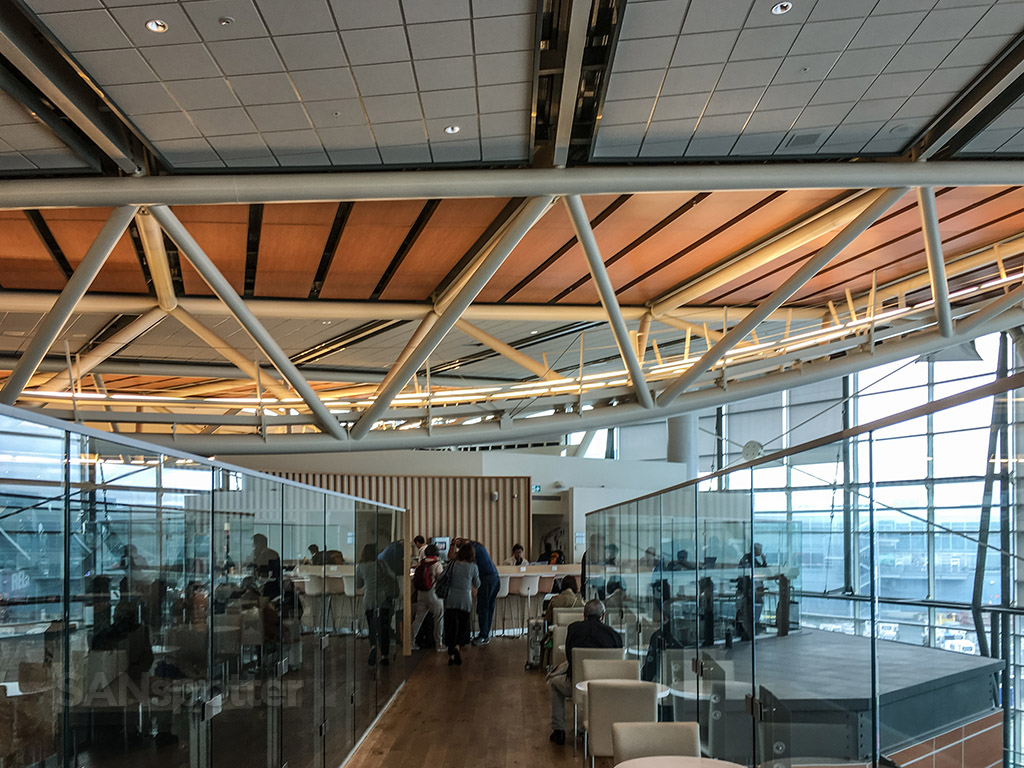 I tired to admire the architecture on the way to the food, but I just couldn’t. If I’ve got food on my mind, I’m pretty sure that I could walk right through a pile of hundred dollar bills without noticing (or caring). 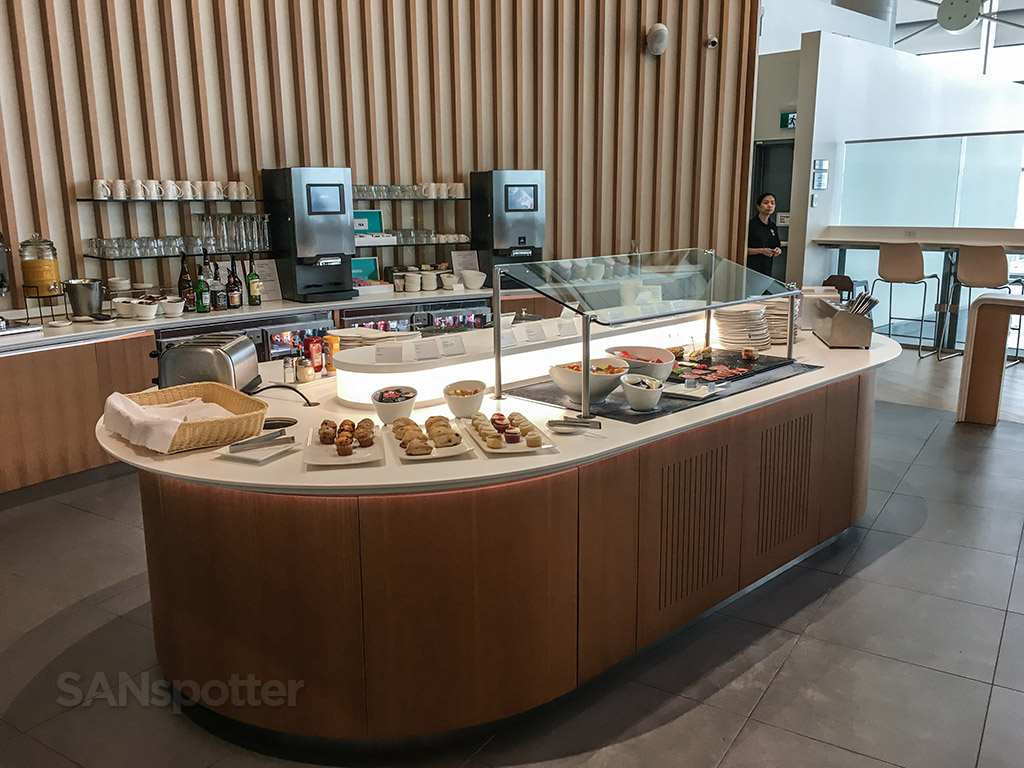 “Oh God, another travel blogger taking a picture of my food” (says the lounge attendant while lurking in the shadows). 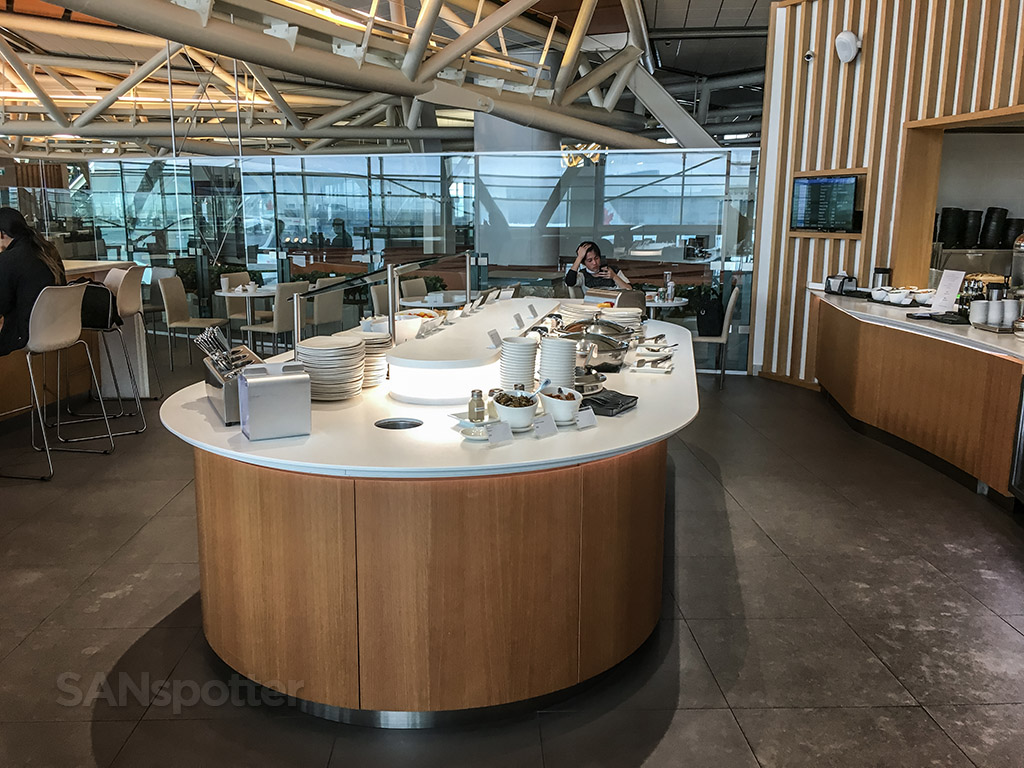 The food selection in this lounge is pretty good actually. The center section contains light snacks such as sandwiches and fruit, while the window on the back wall (on the right) is where you can order plates of real food. The guy in the background looks as if he can’t decide which way to go, and I don’t blame him. Everything looked good! 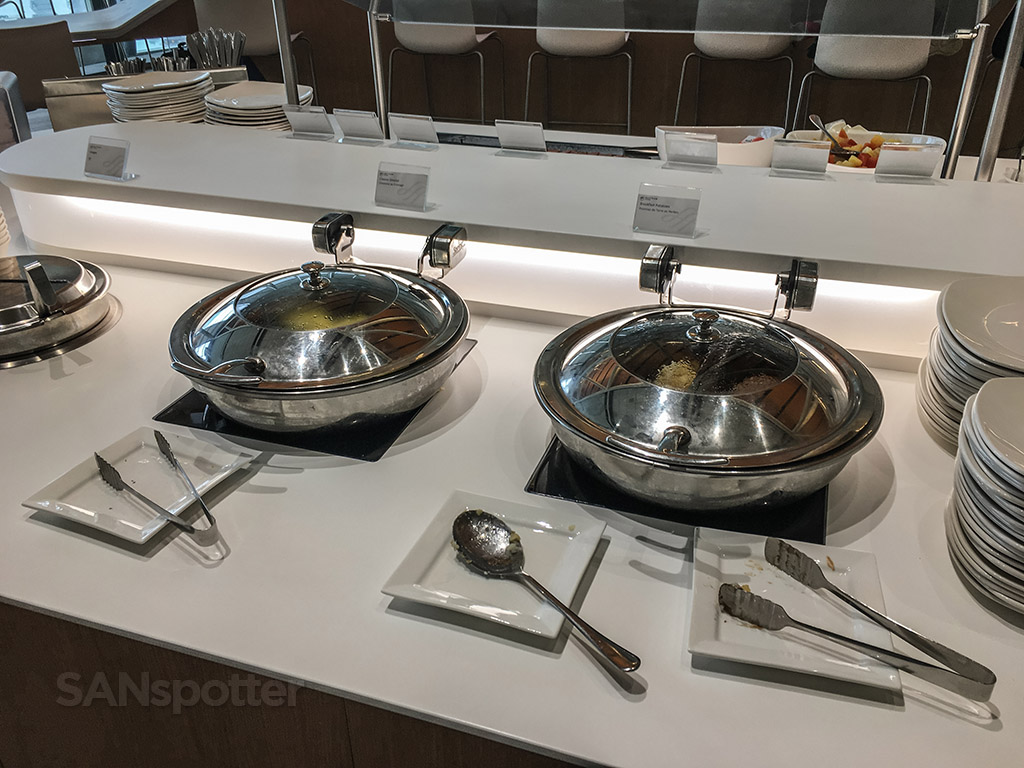 Hot items were available in the center section as well, – eggs and potatoes were the contents of these pots. 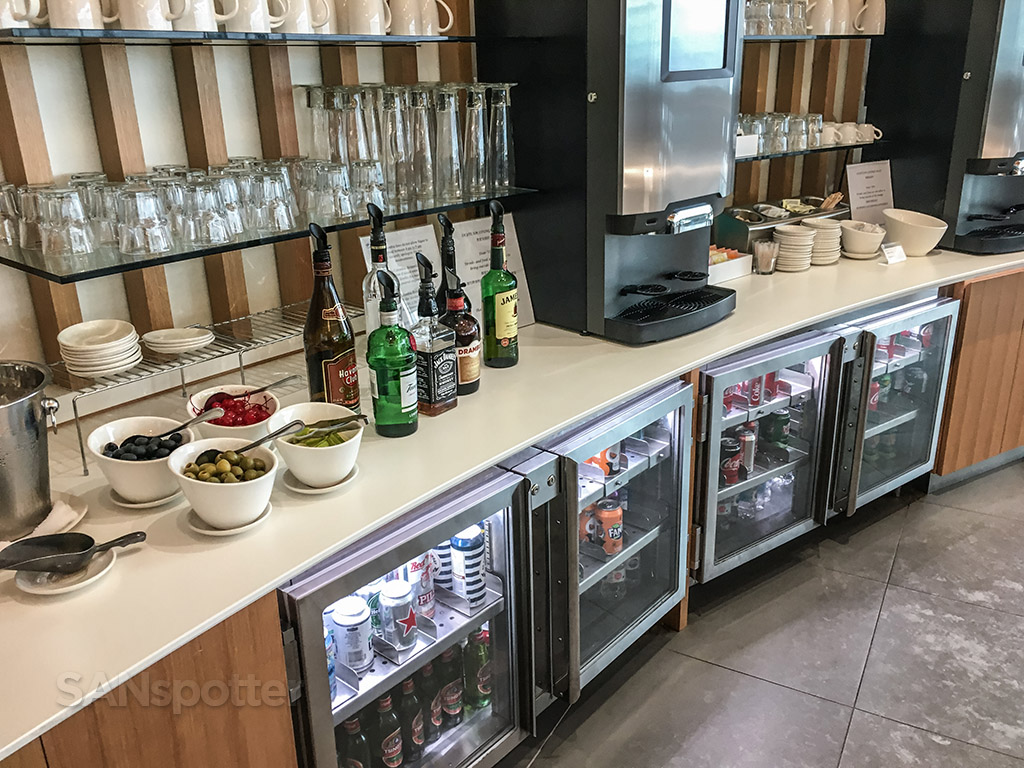 I do believe I see an orange Fanta down there in the refrigerator, which automatically gives me reason to rate this lounge very highly. 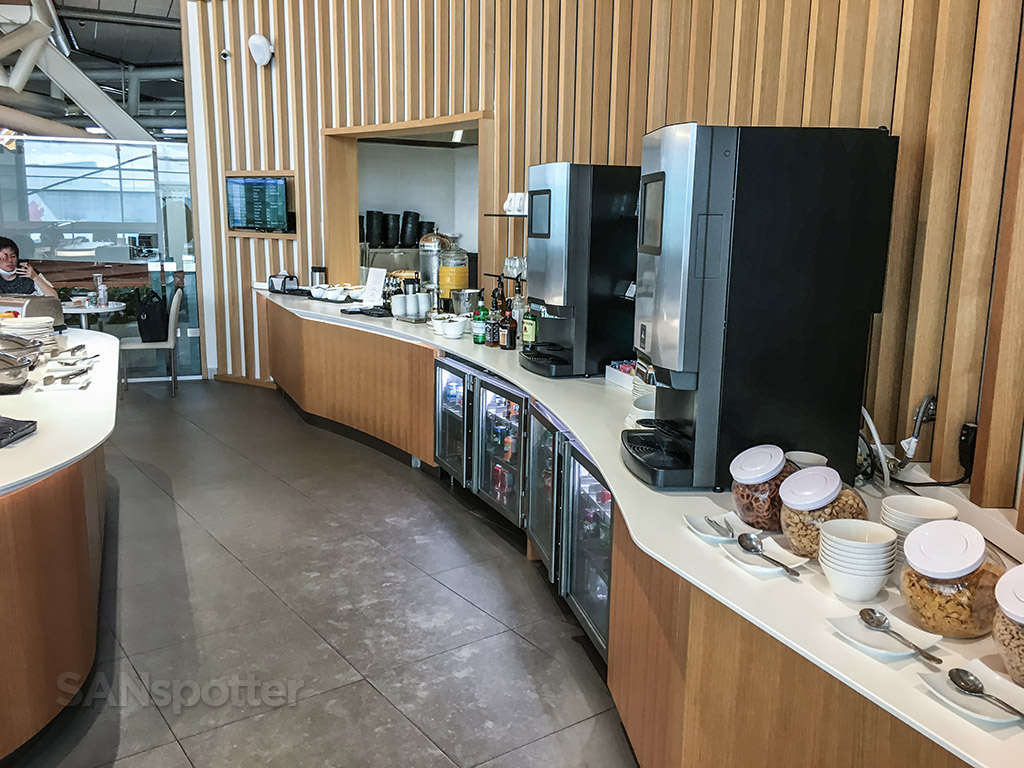 Those needing a stiff drink might not be happy with the offerings in this lounge. The selection of alcohol here can’t hold a candle to the stockpile in the JAL Sakura lounge at NRT! 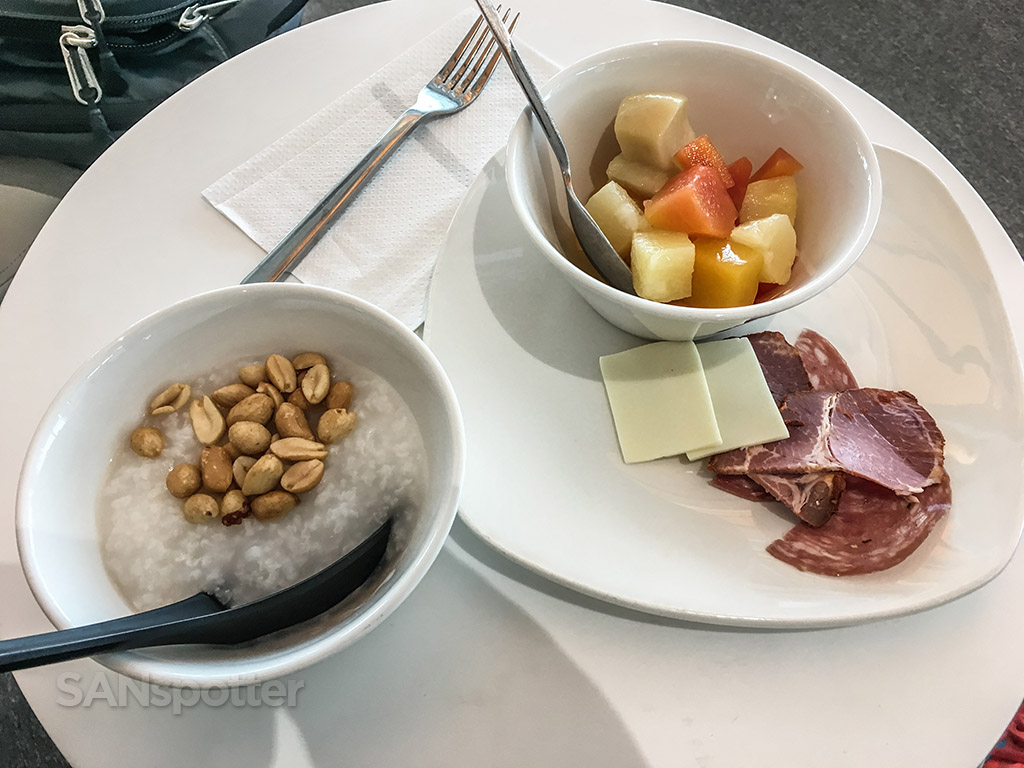 What can I say about this other than that I’m an eclectic eater? Some apples and hot sauce would have been nice, but this was fine. 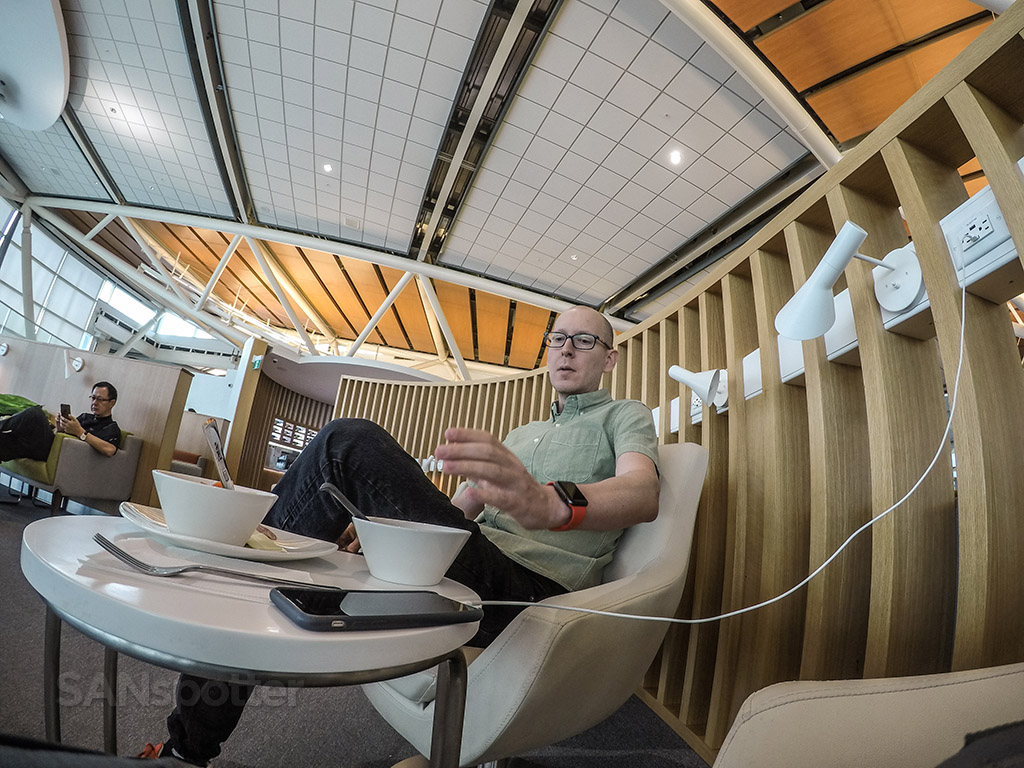 Reaching for the congee. I have no idea why I like mushy rice so much, but I do. 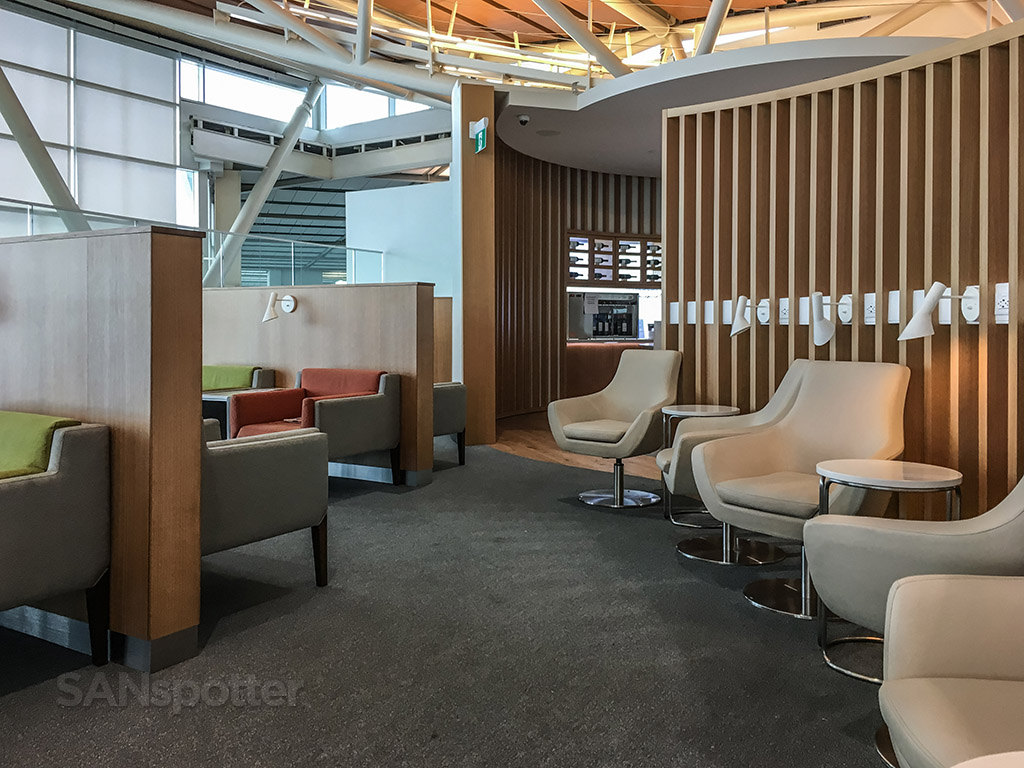 Looking to the right while enjoying the congee – there’s a wide variety of seating options in this place, that’s for dang sure. 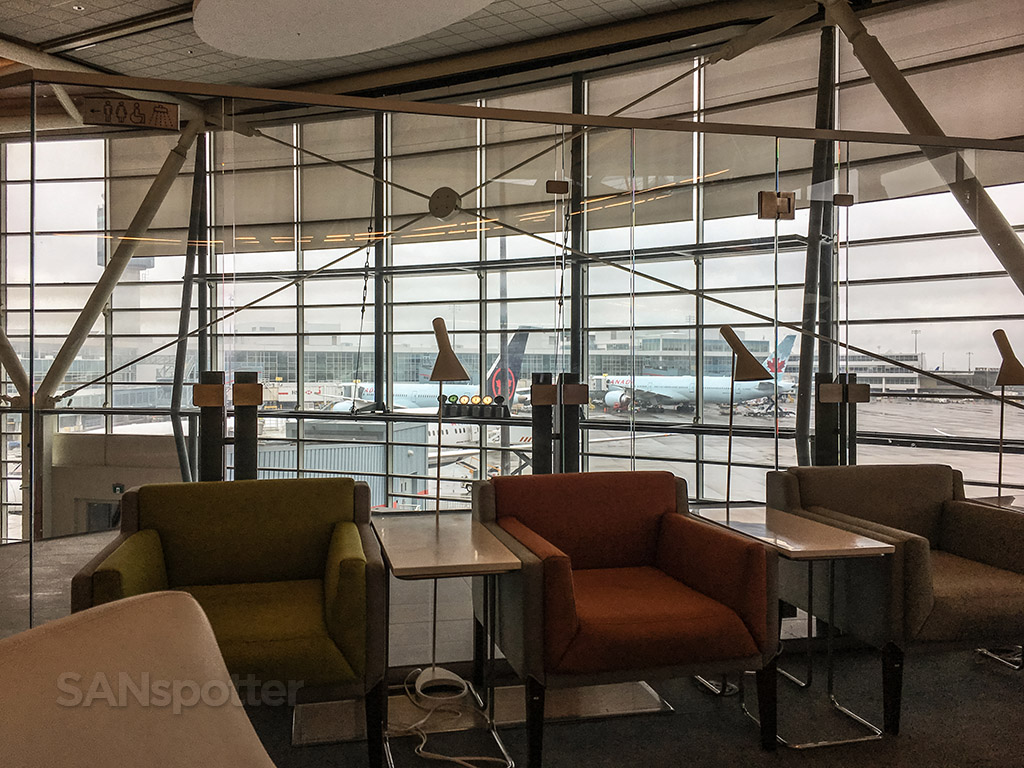 But it was the view to the left that I was particularly fond of. There are three Air Canada Boeing’s in view, and all three are headed to Asia within the next two hours. I wanna go too! 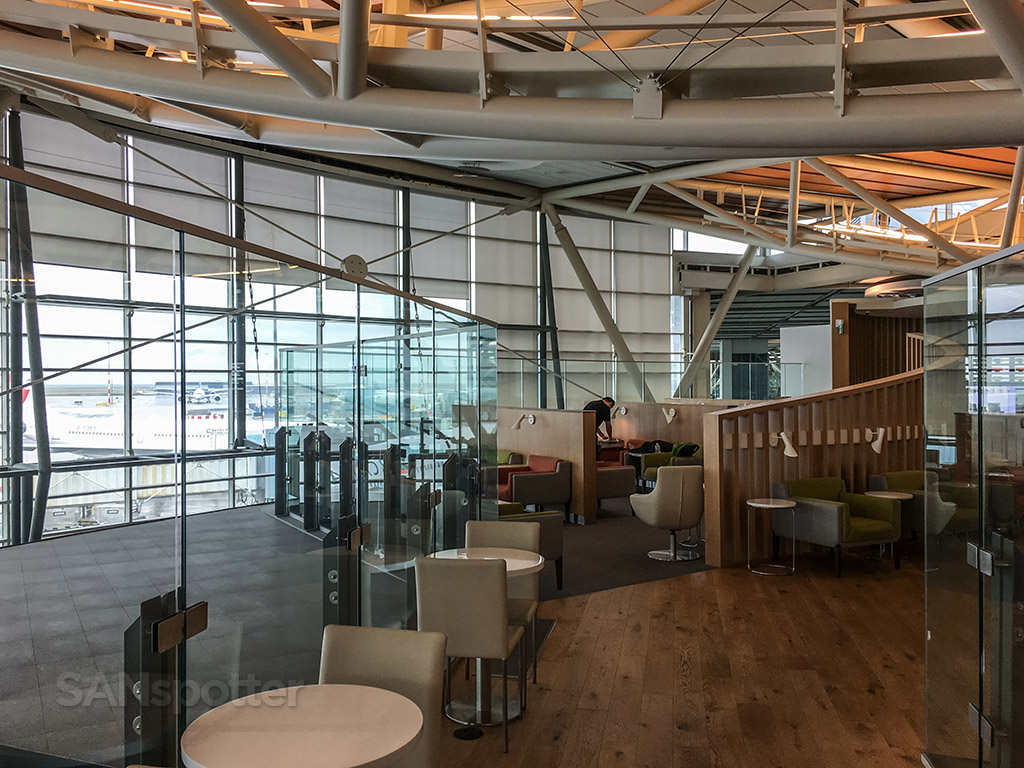 All in all I consider this to be one of the most beautiful airport lounges I’ve ever been in – but for the life of I can’t figure out why they blocked off that area to the left. That’s a prime airplane viewing spot IMHO and it’s a shame to see it go to waste. 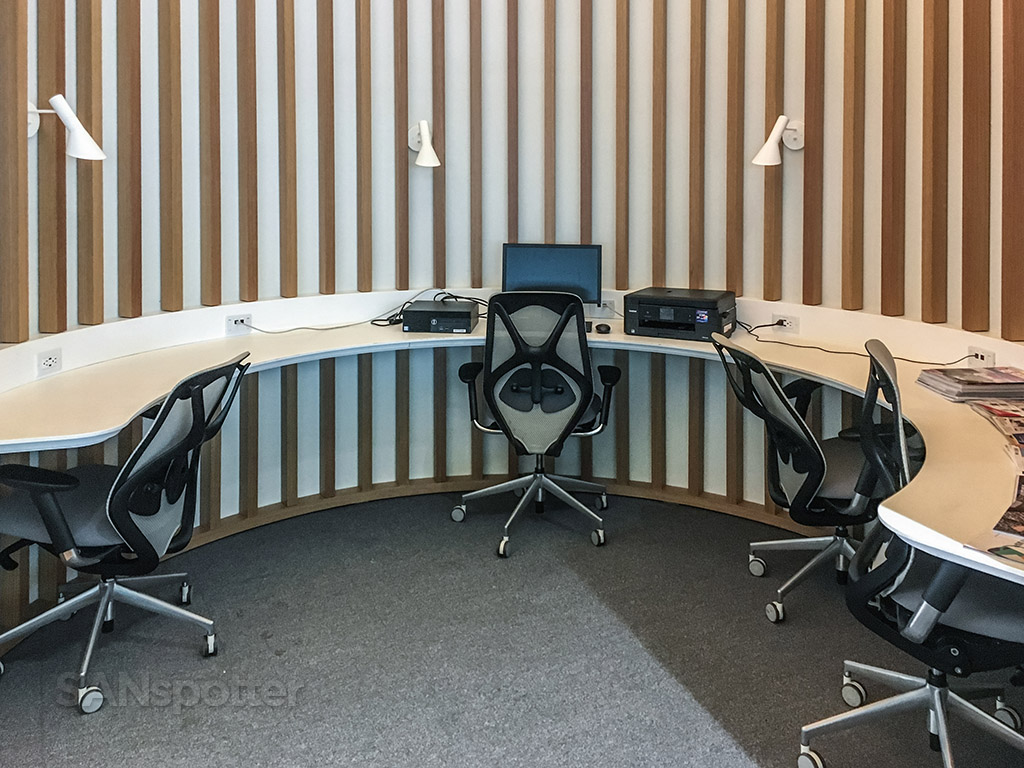 Oh, and there’s a small business center too with A scanner and A printer. It’s not the best setup I’ve ever seen, but I guess it’ll do in a pinch (unless there’s a guy hogging the PC printing the first draft of his book or something). 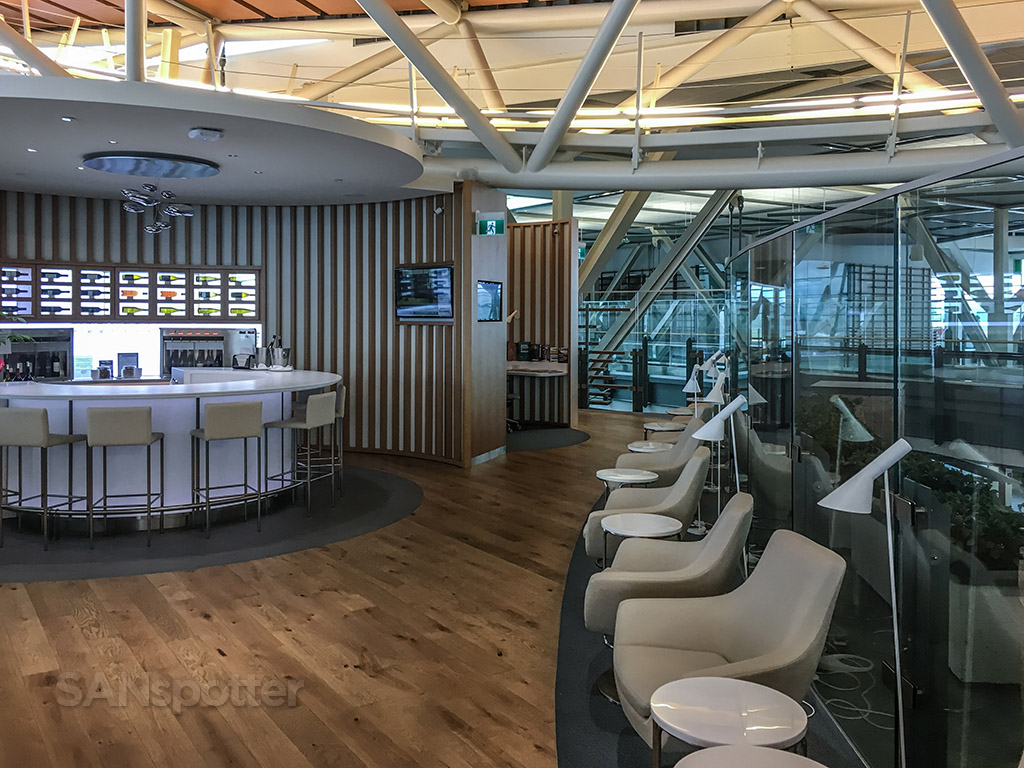 And this is the view on the way out. I’m still really thankful there’s nobody in those chairs judging me as I walk past. Oh, the things they would say…

Summing it all up, I’ve got to say that the best part of this lounge is the food. Everything you saw in the pics above was just the simple “snack” stuff, but there is also a full kitchen here with a really impressive menu – including dim sum (which looked incredible). My goal was to start with a plate or two of the snacks, then make my way over to the kitchen window to order a plate of real food. Unfortunately (as it usually happens) I completely gorged myself on snacks until there was no room left for a real meal. Hey, I can’t help it when there’s so much delicious looking food lying around.

Finally, for those of you out there who are looking for the best bang for the buck when it comes to travel perks such as lounge access (I mean who isn’t, right?), you should know that you’ll get a complimentary membership with the American Express Platinum card. I’m not the type of travel blogger to shill credit cards, but the Amex Platinum / Priority Pass combo is one of the easiest an most effective ways to up your travel game at little to no cost.

Yes, there is a hefty $550 annual fee on that card, but remember what I said about my Priority Pass membership saving me hundreds of dollars on food so far this year. That, combined with other generous perks such as an annual $200 Uber credit, 5x points on all airfare spend (among other perks), and it’s a card that has a permanent place in my wallet.

Anyway, whether you decide to go the Priority Pass route or not, the SkyTeam lounge here at YVR is definitely one worth checking out in your travels through the Pacific Northwest. Don’t overdo it on the snacks though, because the dim sum looked hard to beat!