I couldn’t help but to feel a twinge of excitement as I was standing there in the bathroom of the swanky Moxy hotel getting ready to begin the day. Never mind the fact that it was only 5:30 AM and the lipstick on the mirror was still tripping me out – today was going to be my first-ever Austrian Airlines experience, and I was very much looking forward to diving into it head first.

After a very long but scenic walk from the hotel over to the airport, it took but just a few minutes to check in for my flight to LAX using one of the multitude of kiosks in the departures hall. I was in such a good mood that it didn’t even bother me that two of the kiosks rejected my passport entirely. It’s never a good feeling to have your passport rejected (it hurts just as bad as it did when you were in the 4th grade and the girl you had a major crush on laughed in your face), but the excitement I had burning inside of me kept the positive thoughts flowing while I hopped from kiosk to kiosk until I found one that accepted me (and my passport) for who I am. 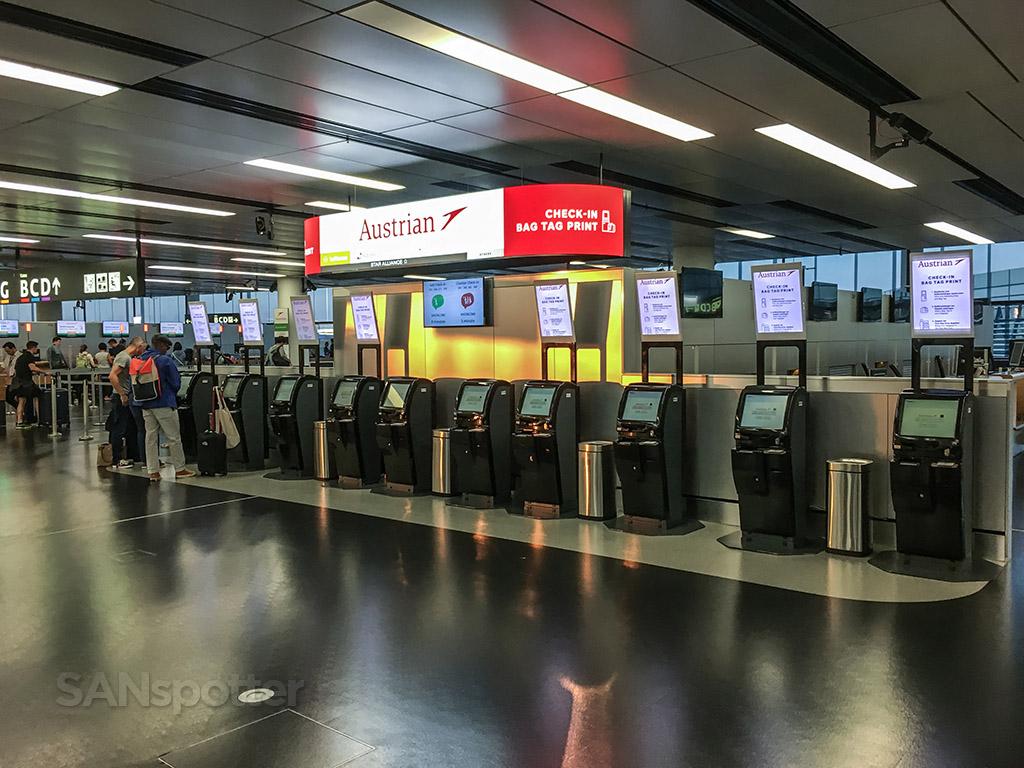 Not having to use fists and elbows to fight my way into the kiosk queue (like I had to do at FLL for my JetBlue flight home to SAN last December) was a sign that today just might be a really good one. 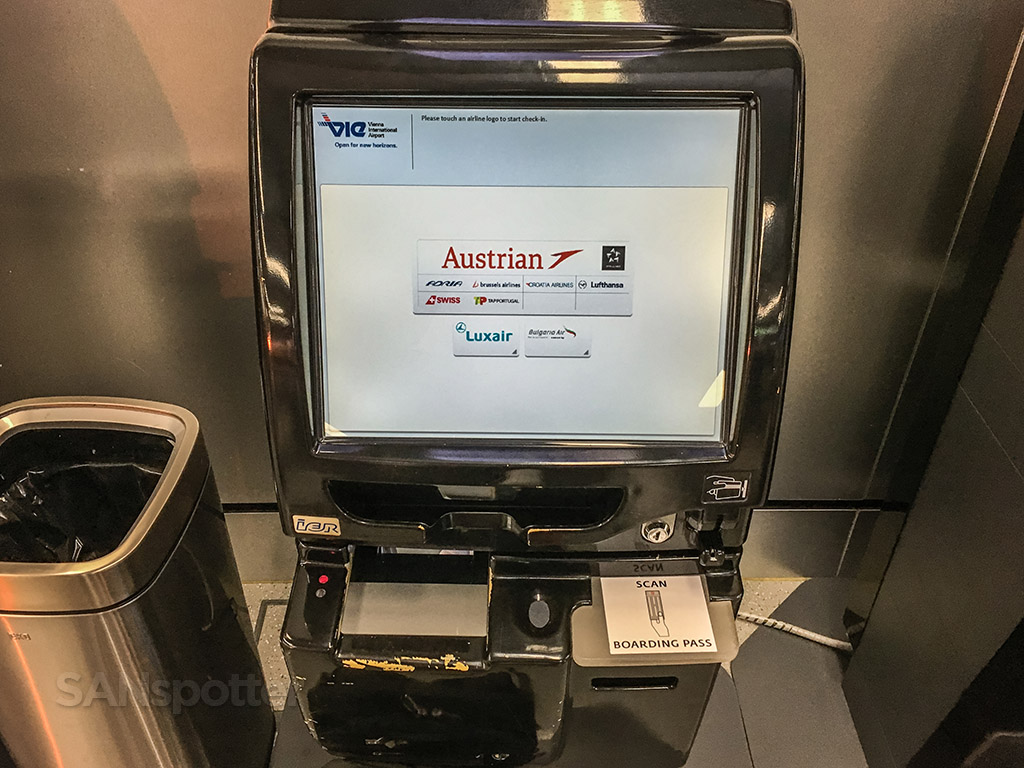 Two other kiosks had just rejected me and my passport, so I had to be extra nice to this little guy with feathery light touches and soft whispers. It worked!

There’s a dedicated security line for business class passengers here at the Vienna International Airport, which was highly convenient but totally unnecessary this morning since the place was a ghost town and even the regular security line was empty. I will say that those security guys are very thorough though, and I kept thinking positive thoughts of what was to come in the Austrian Airlines business class lounge within just a few minutes (once they were finished fondling my unmentionables).

Keep in mind that I’ve had exactly zero experience with Austrian Airlines up until this point in my life, but everything I’ve heard about them over the years has been very positive and lead me to believe that they are one of the world’s premiere air carriers. That’s why I was so excited about seeing their business class lounge – it just had to be good, and as I climbed the stairs to the upper level here in concourse F where the lounges are situated, I was praying with all my might that it would live up to my high expectations. 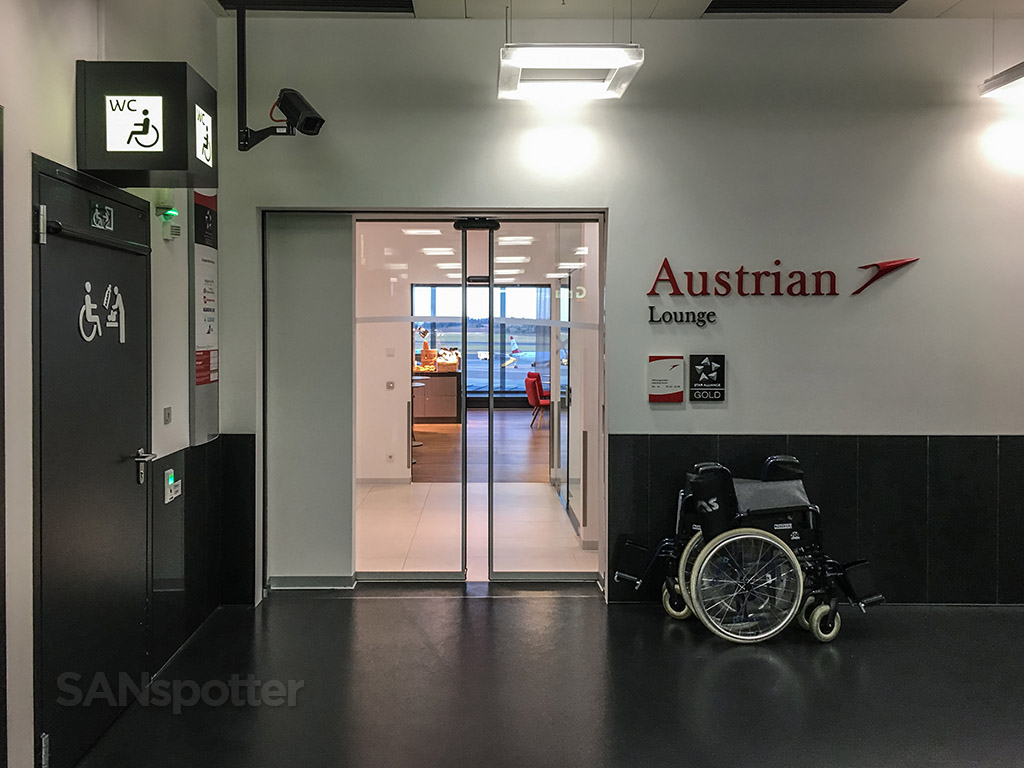 Interesting. Is this the airport trauma center or the lounge I’ve been looking for? 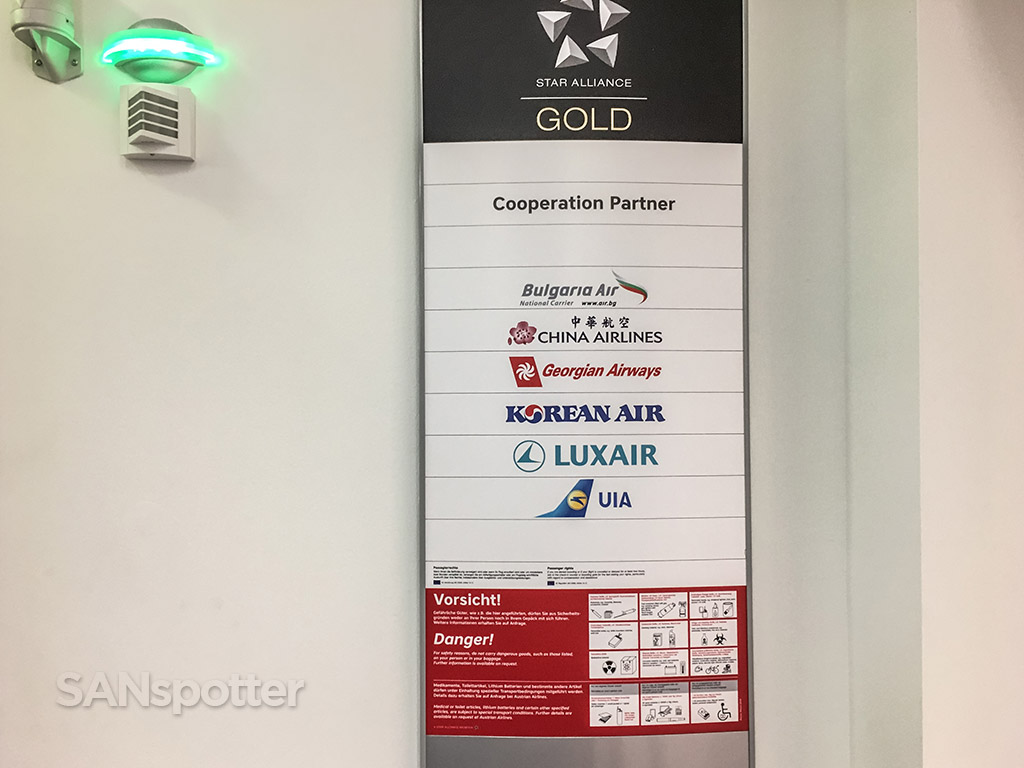 Solid confirmation that this is indeed an airline lounge! I found it odd (and neat) that there were some major SkyTeam airlines on this list – even though it’s a Star Alliance joint. 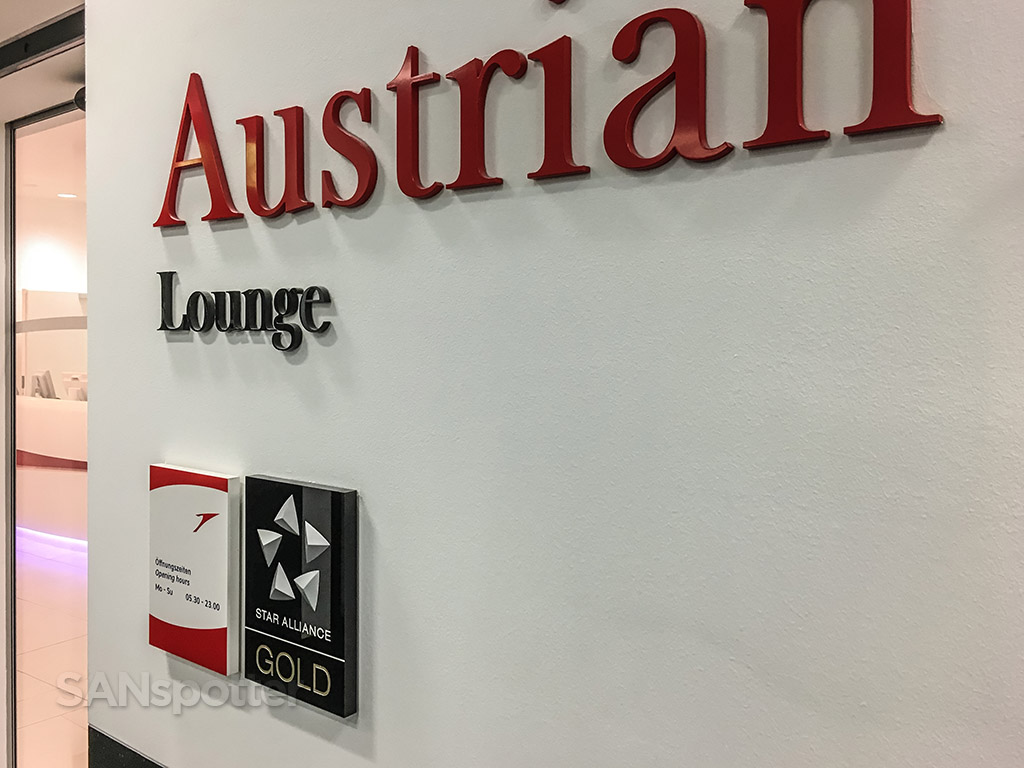 Trying my hardest to nab a cool exterior shot of this place which doesn’t scream “emergency room”. I couldn’t do it. 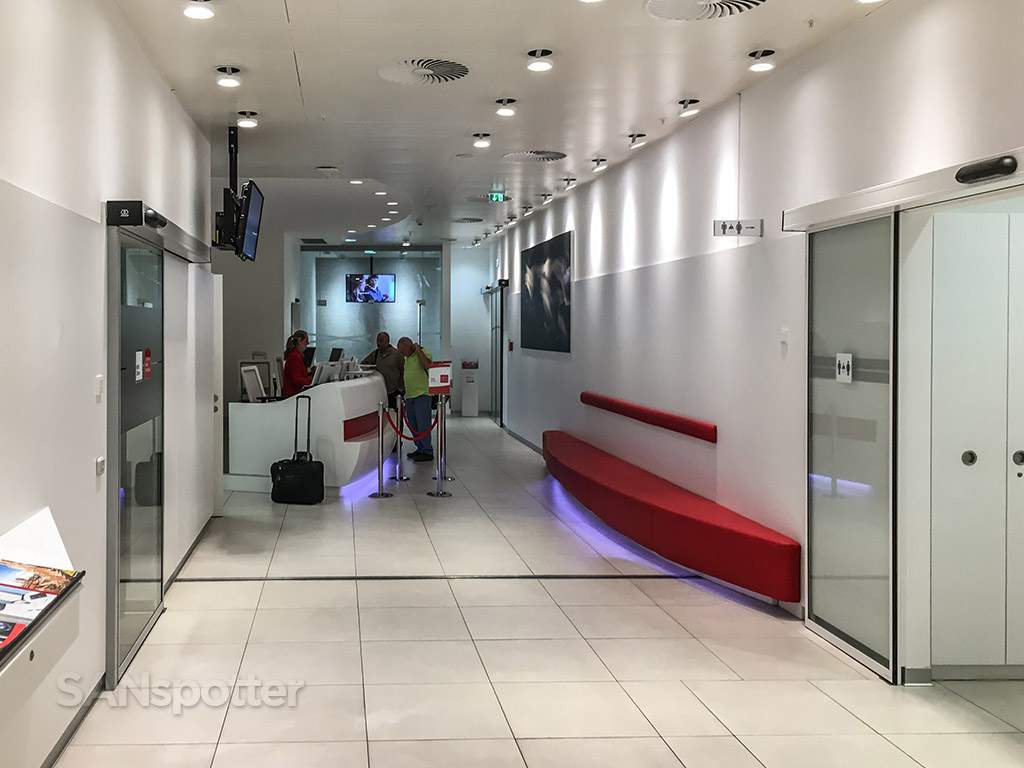 “Hi, I’m here for my 8am colonoscopy…” Even the main lobby looked like a hospital! 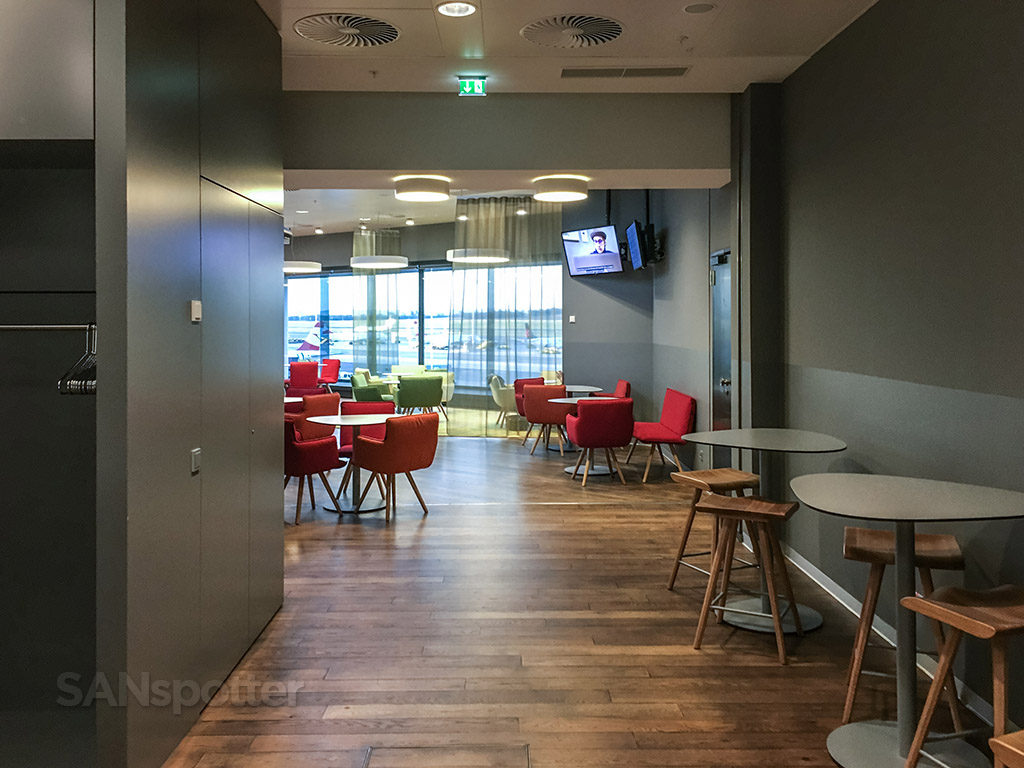 Thankfully (like, super-duper thankfully) there wasn’t a team of anxious-looking rubber glove-wearing doctors and nurses waiting for me as I walked inside. This just might be an ok place after all.

My first impressions of the place were something along the lines of me being disappointed in myself for having such unrealistically high expectations. Of course it looked like a very nice lounge with plenty of relaxing seating options with loads of drinks and snacks, but it didn’t live up to what I had been envisioning in my head. I guess I was expecting it to be something more along the lines of the Delta Sky Club in terminal 4 at JFK, or the United Club at LAX.

Nothing about the space screamed “flagship” to me, probably because of how small and cramped it was. It’s a really fun looking space with loads of neat little design details (and huge windows to the outside world), but it’s a small single room without the nooks and crannies I like which are necessary to hide and get away from everyone else. Not that I’m totally antisocial or anything, but I do like to work on the blog in airport lounges, and there wasn’t a very good place to do that here. 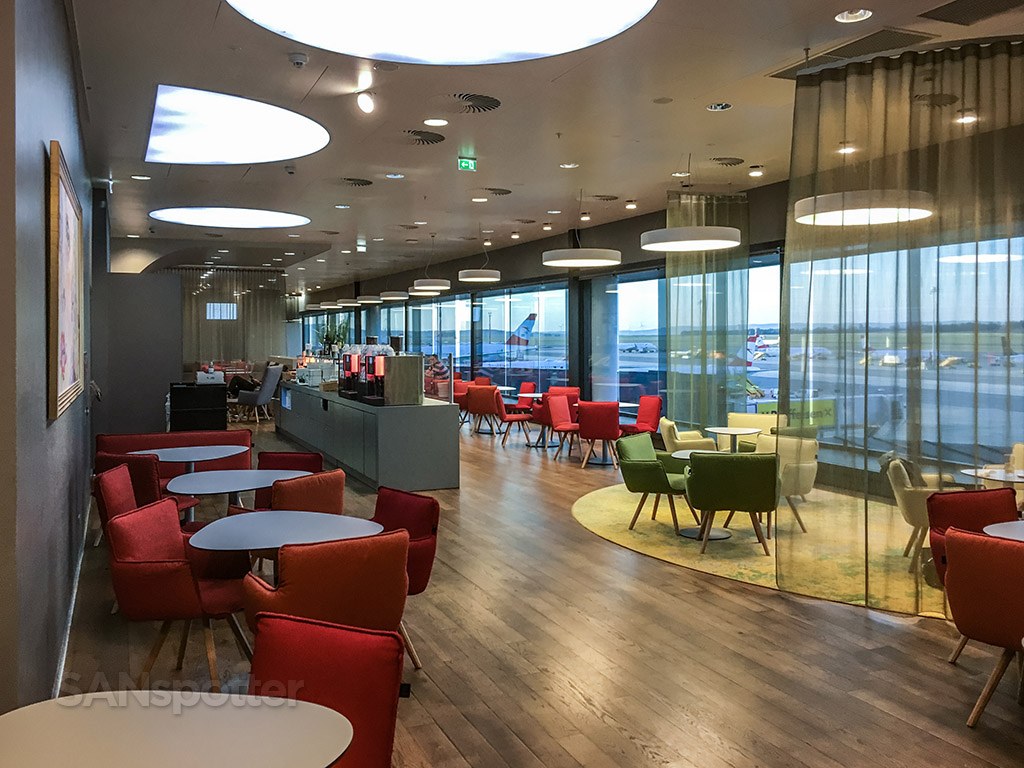 This doesn’t look so bad, right? I really like the fact that they weren’t afraid to use the Austrian Airlines brand colors, but it’s a small space and you’re seeing about 95% of it in this single pic. 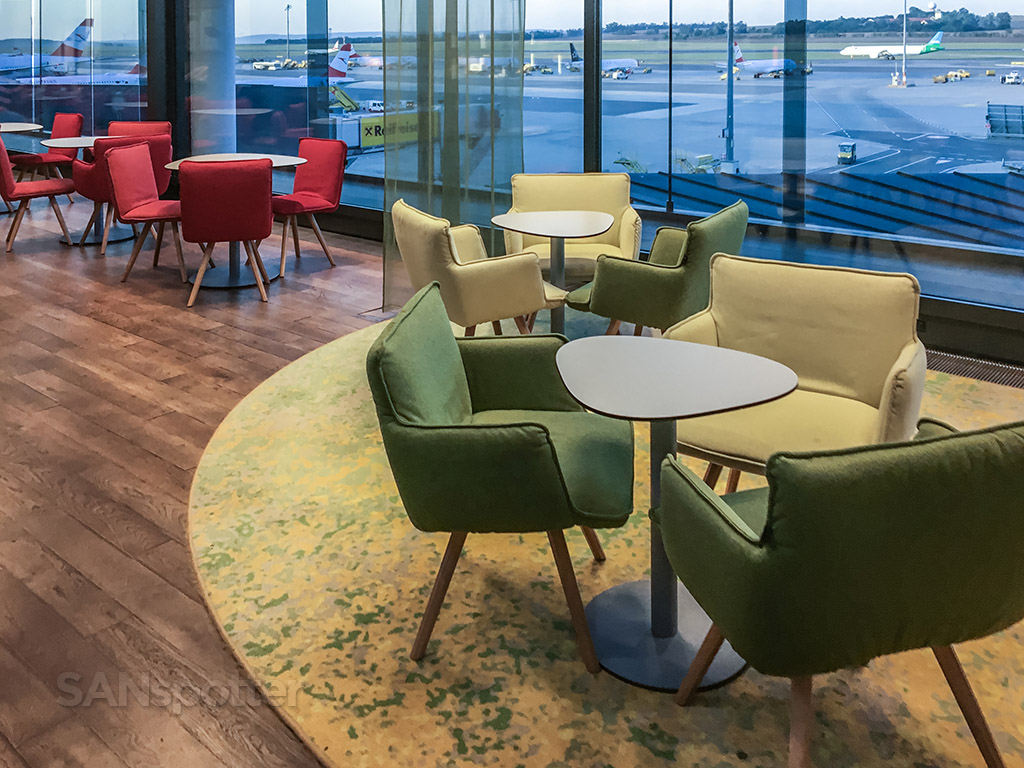 It’s a good thing they didn’t ask me to design the place, because I wouldn’t have had the restraint to include these green and yellow chairs. Everything would’ve been red if I was in charge. 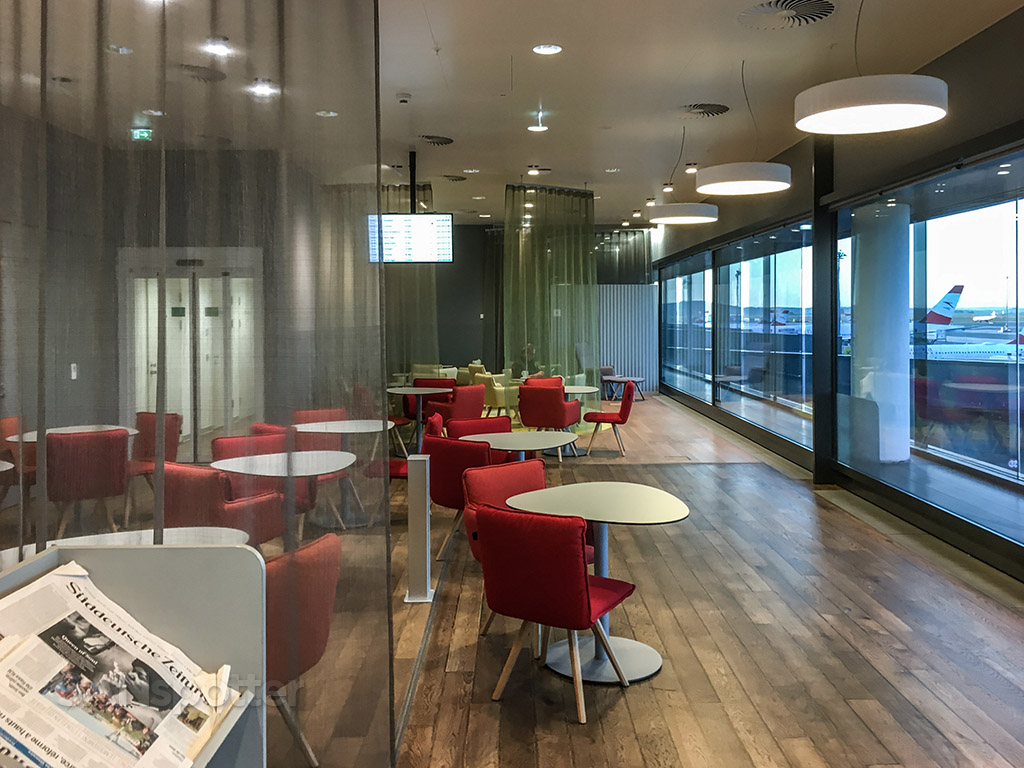 Stepping a little bit further into the space (like 10 feet further) to show you the far end. I told you it was small! 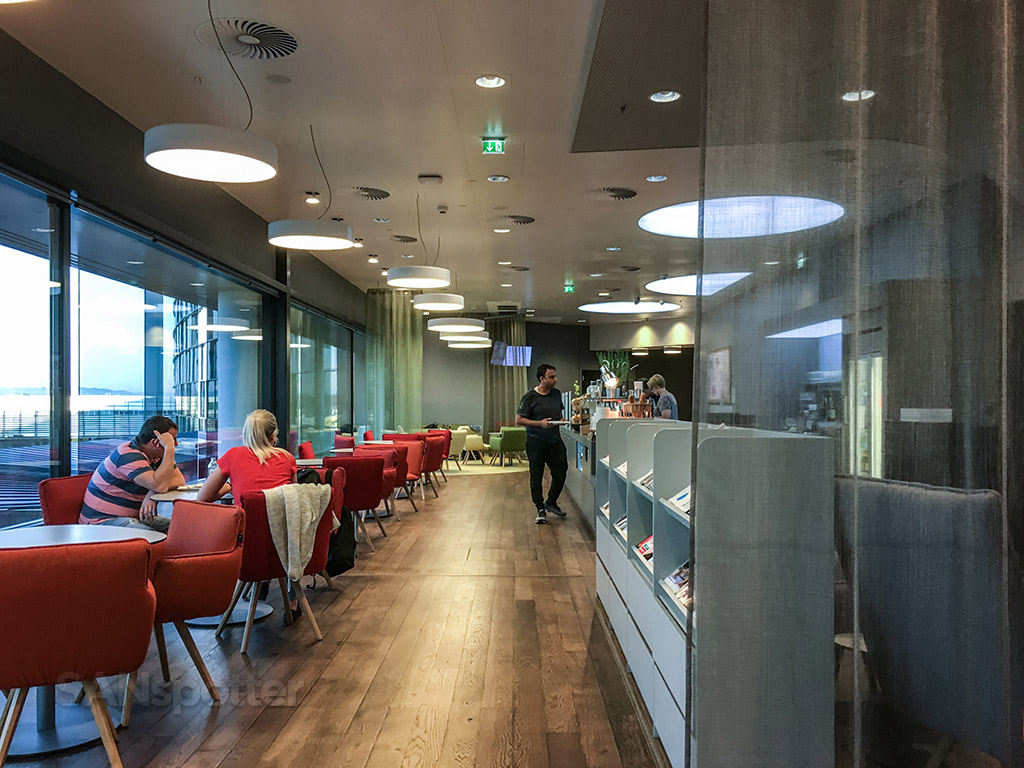 Standing in the exact same spot as my last pic, but this time facing the main entrance. I know – I’m getting the sense that some of you are looking like that guy in the red and blue striped shirt while you wait for me to start talking about the food… 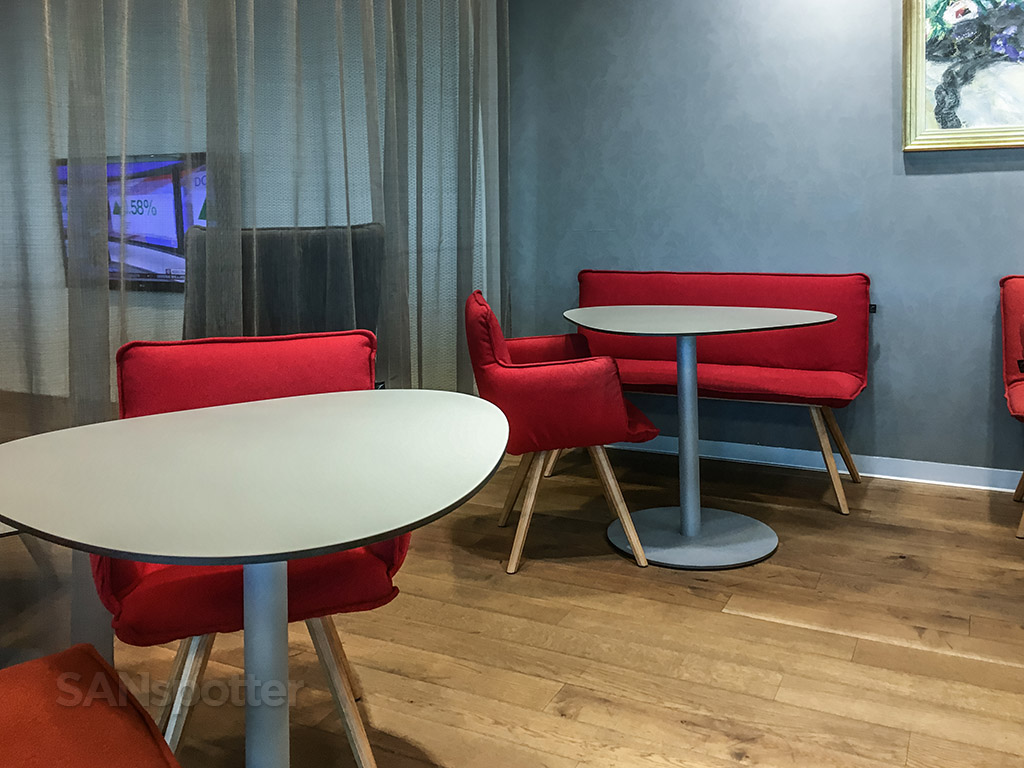 Teeny-tiny tables and chairs, a clear indication that they don’t want us hanging around very long. 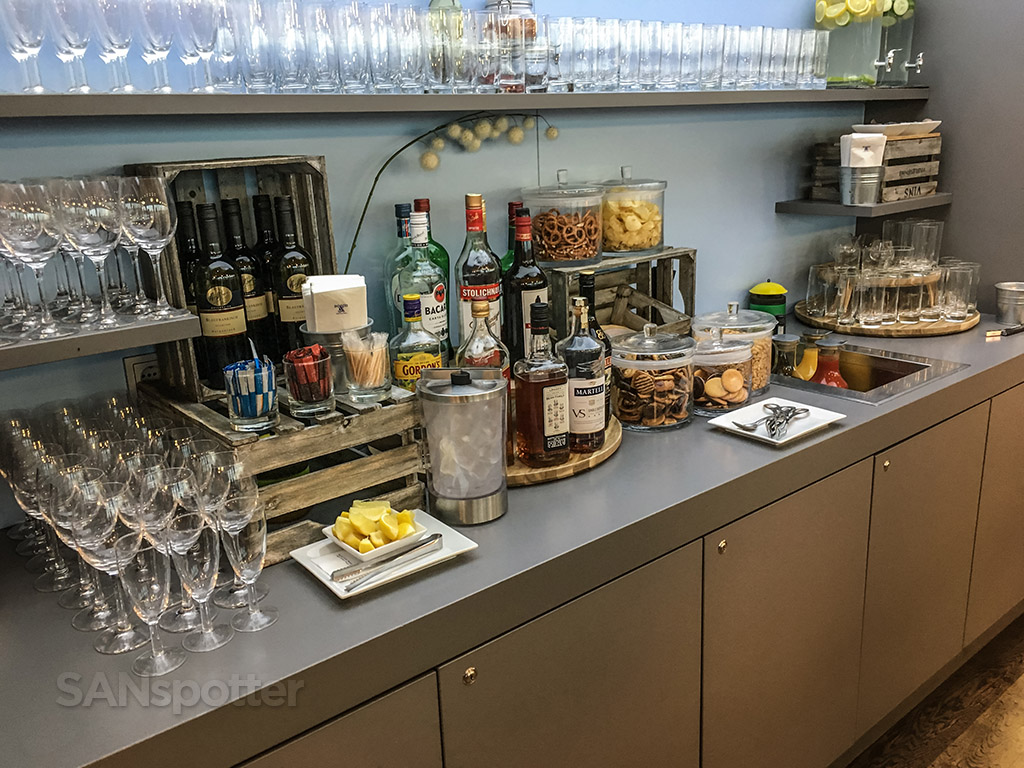 Ok, I won’t drag this out any longer. Let’s have a look at the dining options here in this lounge, starting with the Breakfast of Champions section (potato chips, pretzels, and hard liquor). 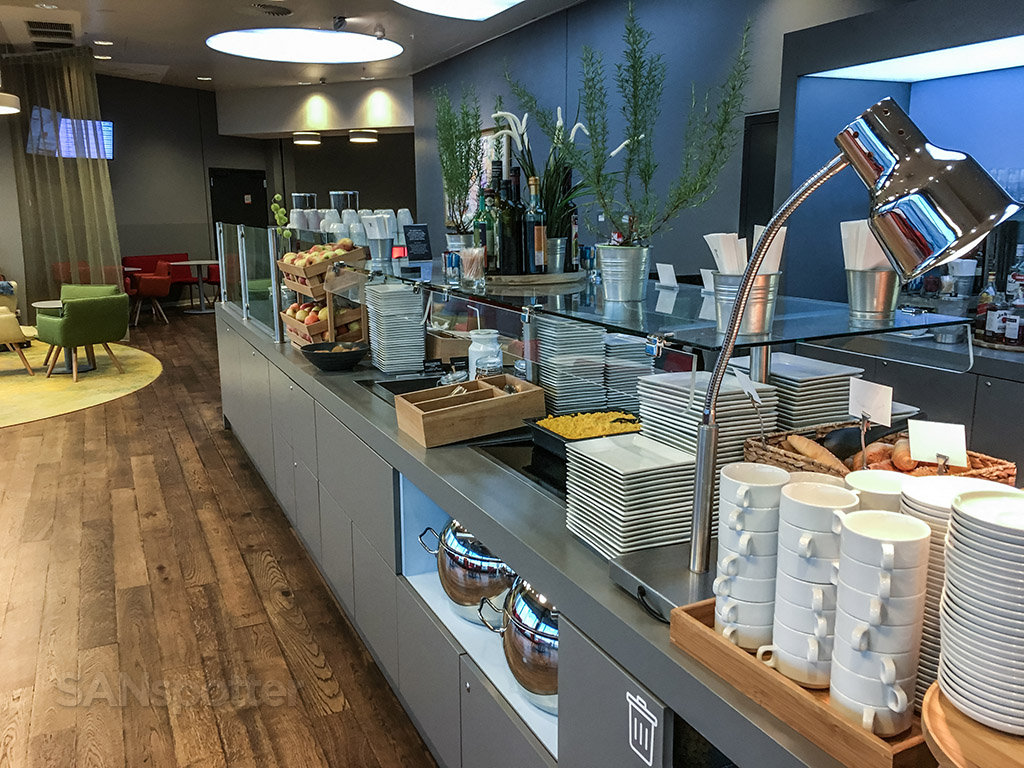 For those of you not in the mood to fill up on salty snacks and whiskey, you’ll be happy to know that there’s a full bar of real food as well. 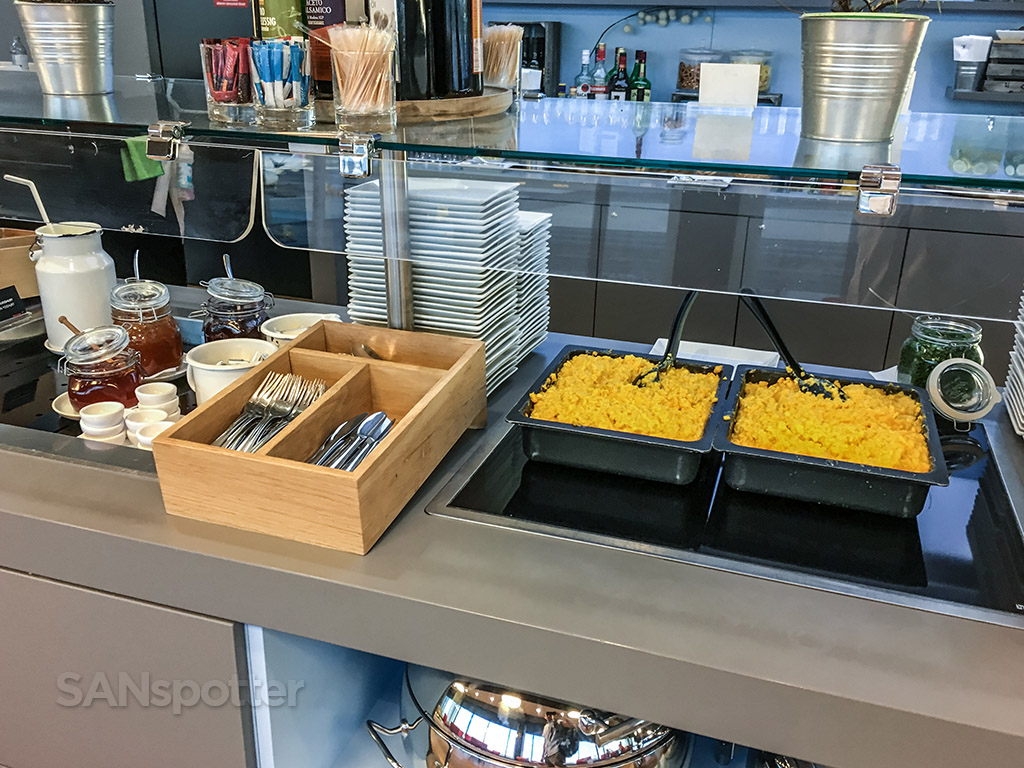 I hope you’re in the mood for scrambled eggs, because wasn’t much else available this morning. But what do I know? Perhaps there are a lot of people that walk into this lounge every day craving a plate of eggs to go with their scotch & soda, and I’m just not hip to the latest breakfast trends. 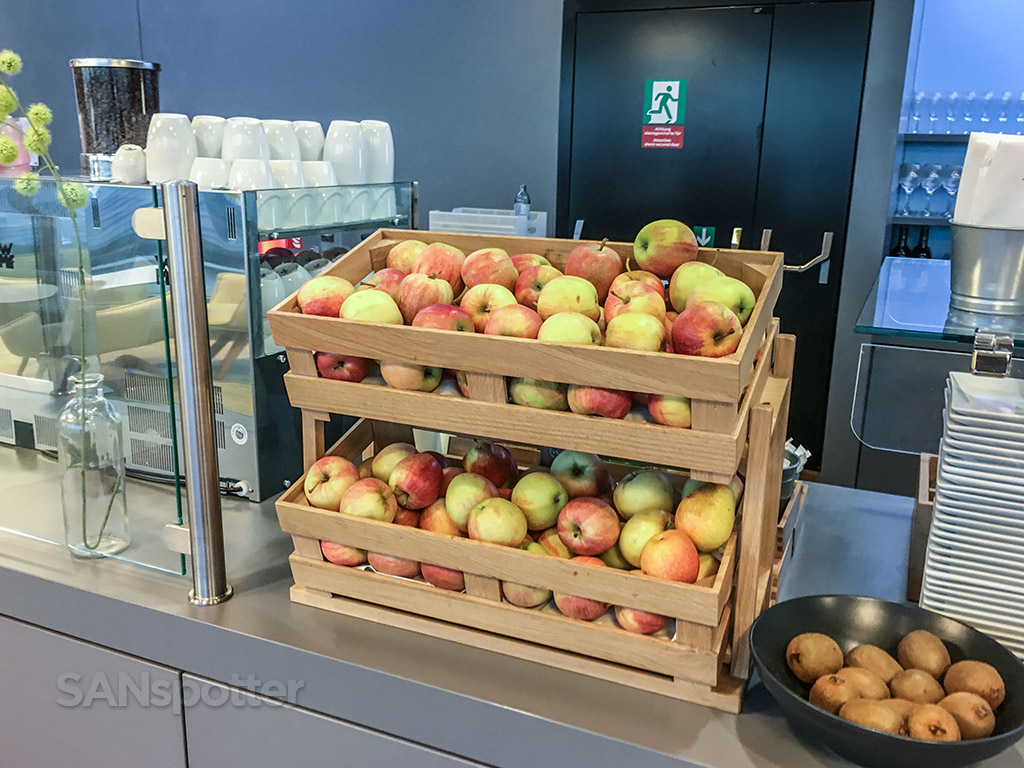 And you really like apples too, right? It looks like they got a really good deal on an entire orchard! 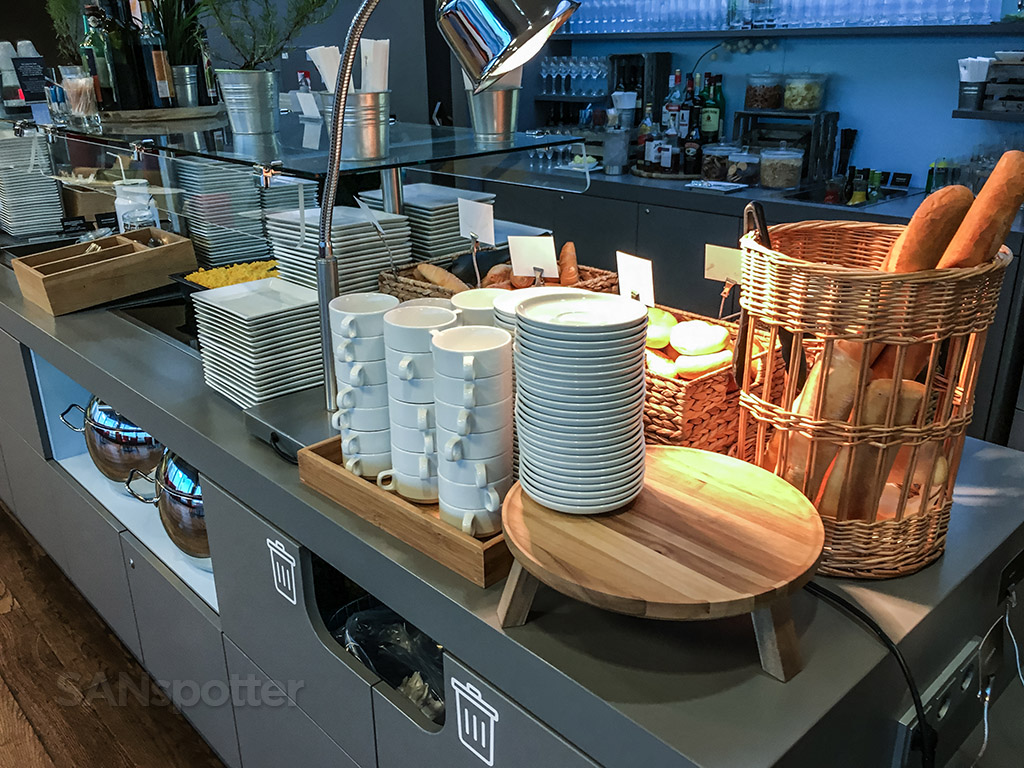 But this is Europe after all, so as you would expect, there is plenty of fresh bread to go with your apples. 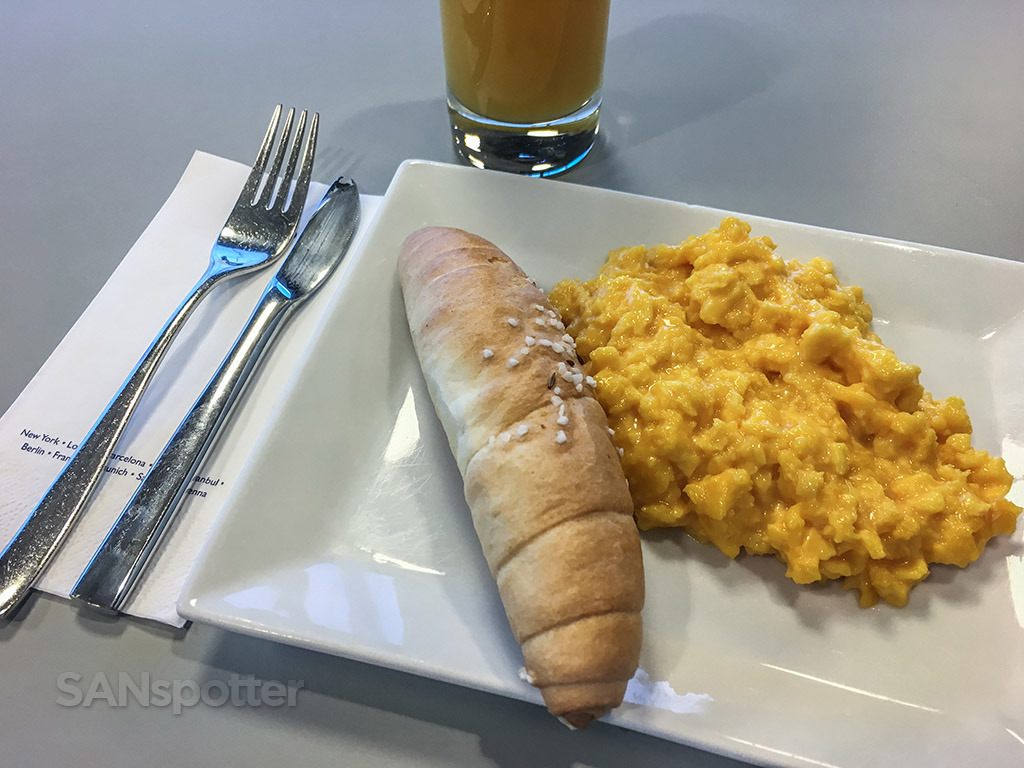 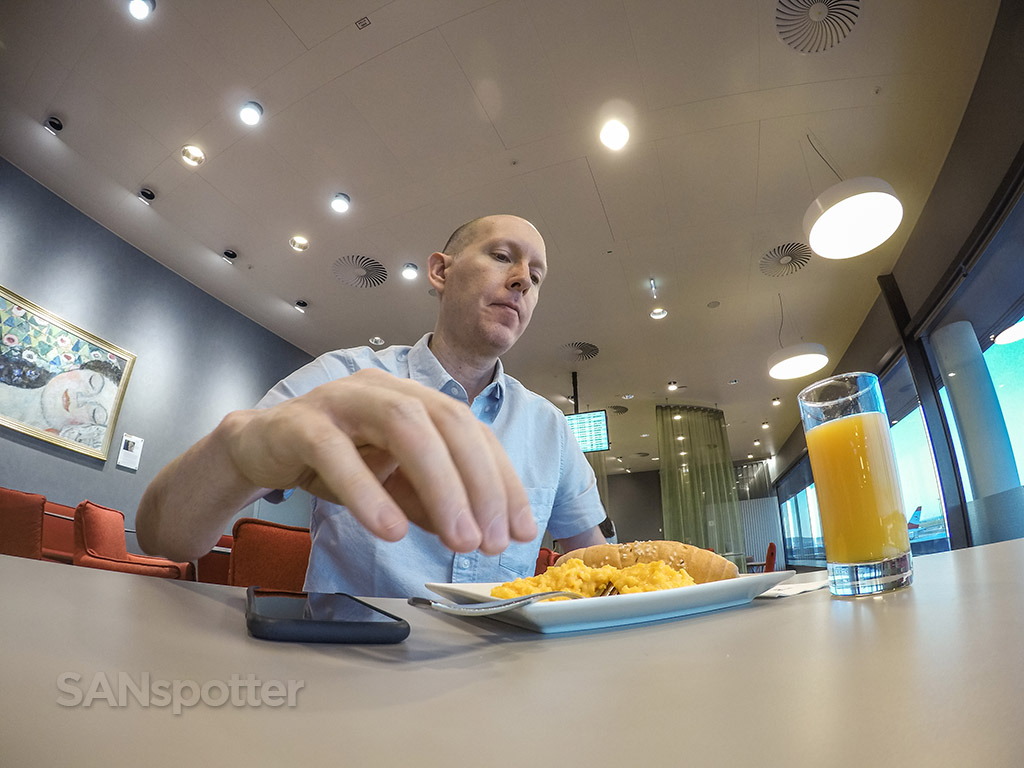 SANspotter, about to take a handful of steaming hot scrambled eggs. I kid, I kid. I promise that I used the fork like a normal human being! 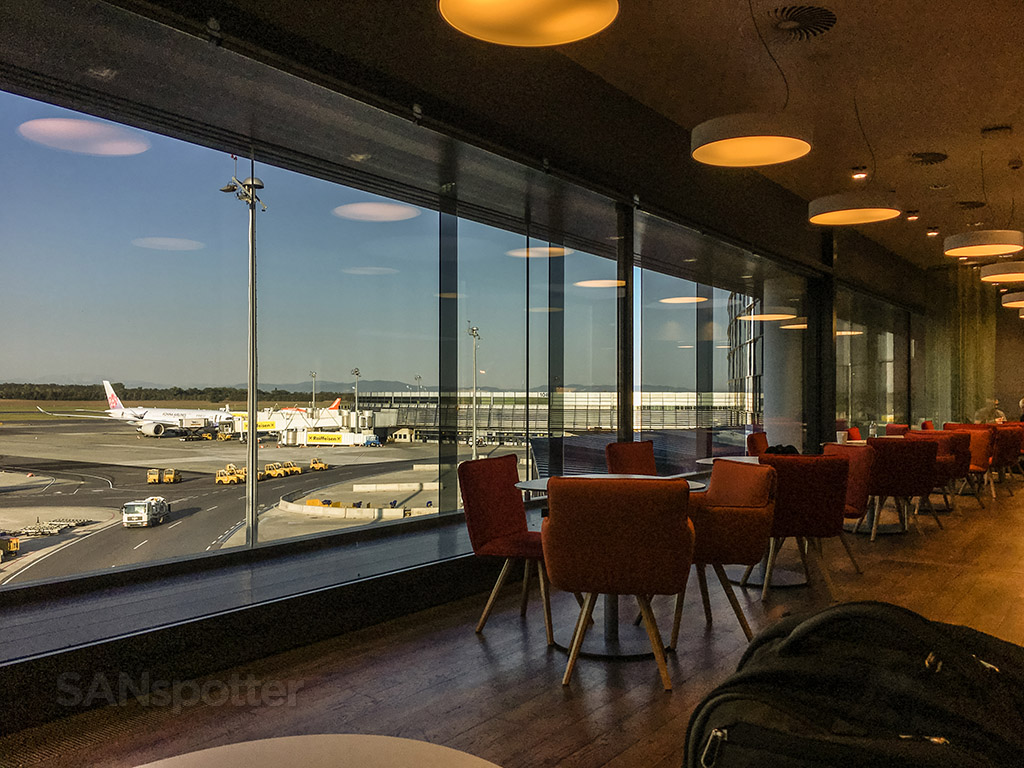 This is the view I had while I was shoveling eggs into my face. The views to the outside are amazing, and I could’ve sat here for hours if I didn’t have a plane to catch. 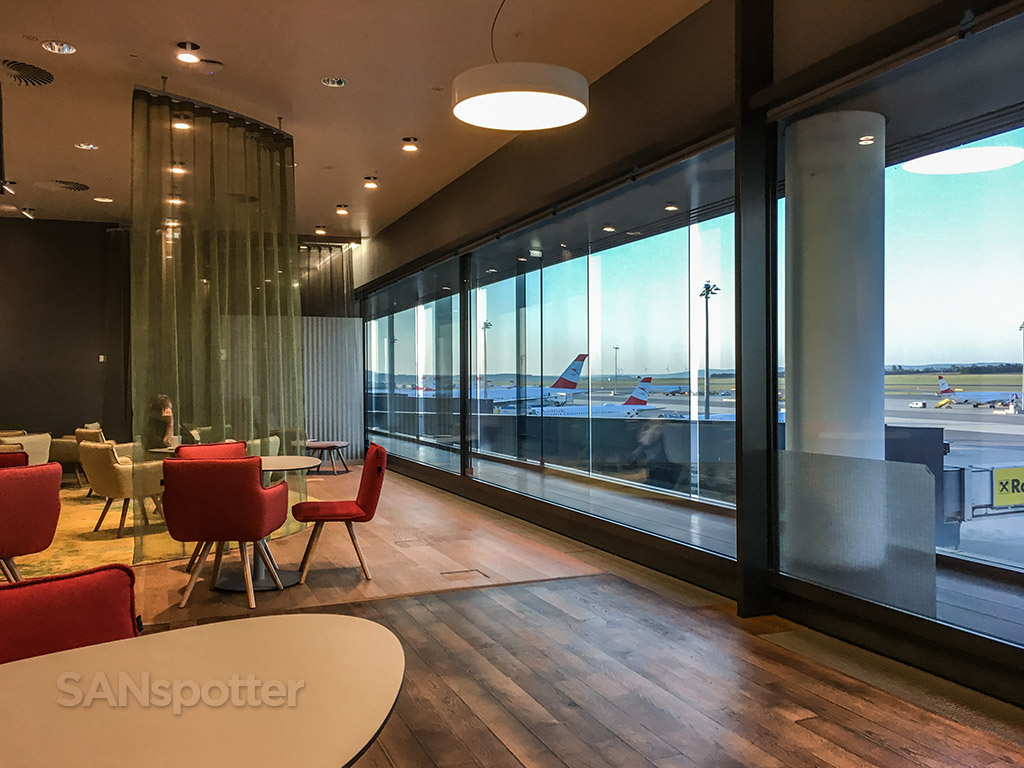 Looking the other way, and that 777-200 parked out there is my ride home to LAX. Hopefully they won’t be serving scrambled eggs and apples on today’s flight. 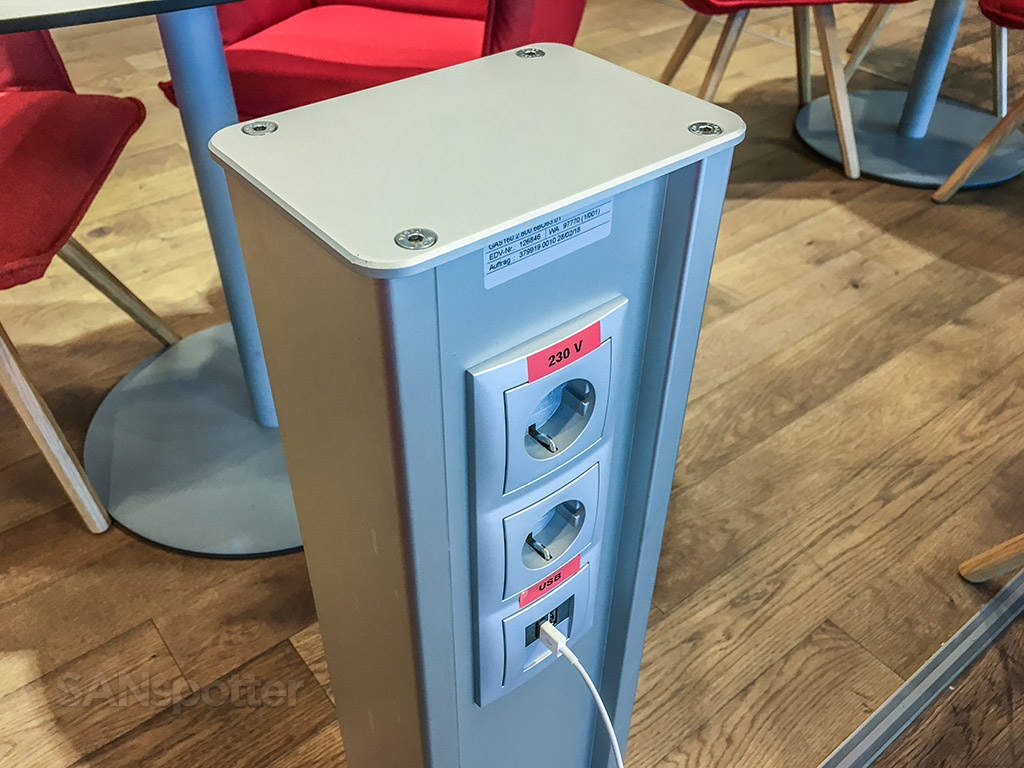 And right behind me was this awkwardly-placed but oh-so-convenient power outlet. There are very few places to charge your phone or laptop in this lounge, so be prepared to fight with your fellow lounge mates if you need power. 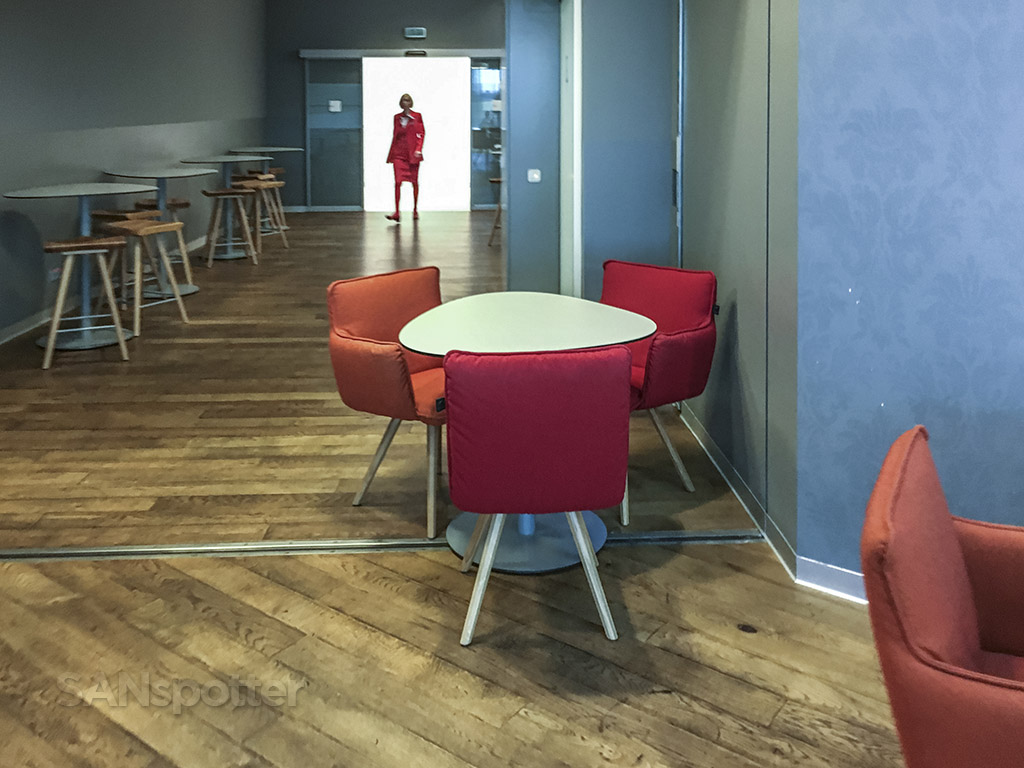 Even the employees match my shoes. This is my kind of business class lounge!

Despite it’s really small size and the fact that it looks like a hospital upon entering for the first time, this lounge grew on me quickly and it wasn’t hard to appreciate it for what it is (a library-quiet retreat from the hustle and bustle of the main terminal). The breakfast menu wasn’t all that impressive, and I couldn’t find a quiet spot on my own to hide from everyone else, but overall I enjoyed the peace and quiet and the large views to be active taxiways right outside the floor to ceiling windows.

For all of you lucky-duck Priority Pass members out there, there’s a lounge right next to this one called the “Air Lounge” (really creative name, eh?) which I am told is very similar in style and design to this one. So even though Priority Pass members don’t have access to this Austrian Airlines business class lounge, you’ll still be able to get the exact same experience right next-door.

Ok, who else is getting excited about seeing what Austrian Airlines 777-200 business class is like? That review is next!