Of all the completely oddball international airline routes in this world, Hainan’s new TIJ-PEK service might seem like a total head scratcher that would make pretty much anyone mutter a “WTF” or two. And I totally get it – Tijuana doesn’t have the best reputation for being a multicultural and world class business center, and I would bet that pretty much anybody would have a hard time trying to figure out what kind of ties this northern Mexican city has with China. I sure as hell have a difficult time with it.

What’s even more interesting is the fact that this isn’t the only daily nonstop service from Tijuana to China right now. As crazy as it sounds, AeroMexico also has some skin in the game, running a daily 787-8 to and from Shanghai (a service which has been running on and off for a very long time). Go ahead – blurt out another “WTF” or two. It’s ok.

Before getting too deeply into the topic of why these flights exist in the first place, I’d like to share with you some pics from Hainan flight number 7926 from Tijuana to Beijing that my friend Yuxuan was kind enough to share. She took this flight a couple weeks ago, and her overall experience sounded positive. The most important thing is that she never once said “I’ll never fly this ******* airline again!” which is usually the best kind of indication that things went generally well. FYI, the pics are hers, but the commentary is mine. Let’s have a quick look…

Hainan Airlines 787-8 (B-2722) side view illustration by norebbo.com. I’m thanking my lucky stars that she didn’t fly on one of their colorful panda-themed planes, because that would have taken forever to illustrate.

Seat map of this Hainan 787-8 (courtesy of seatguru.com) showing Yuxuan’s seat (32K) for this flight to PEK. 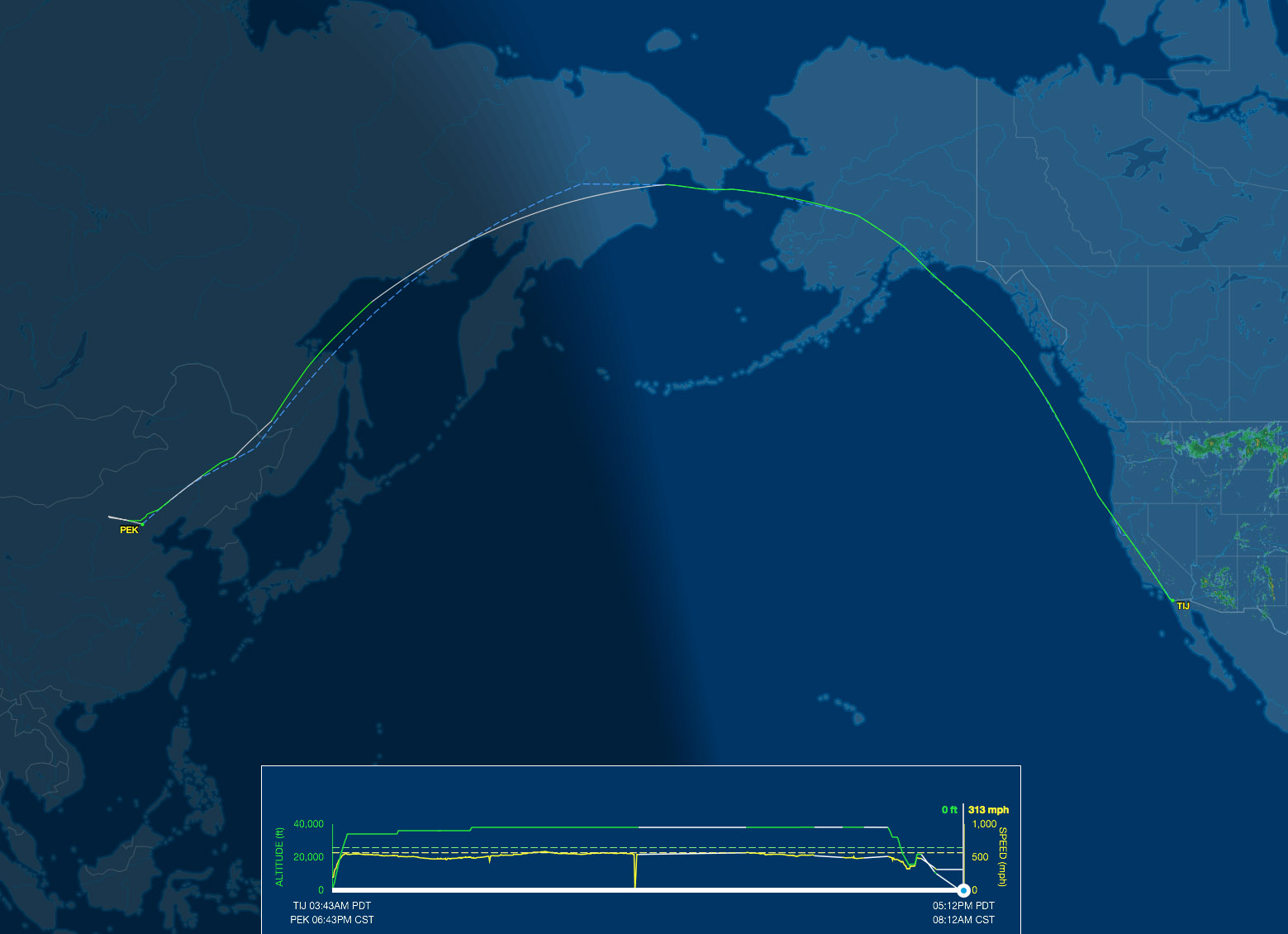 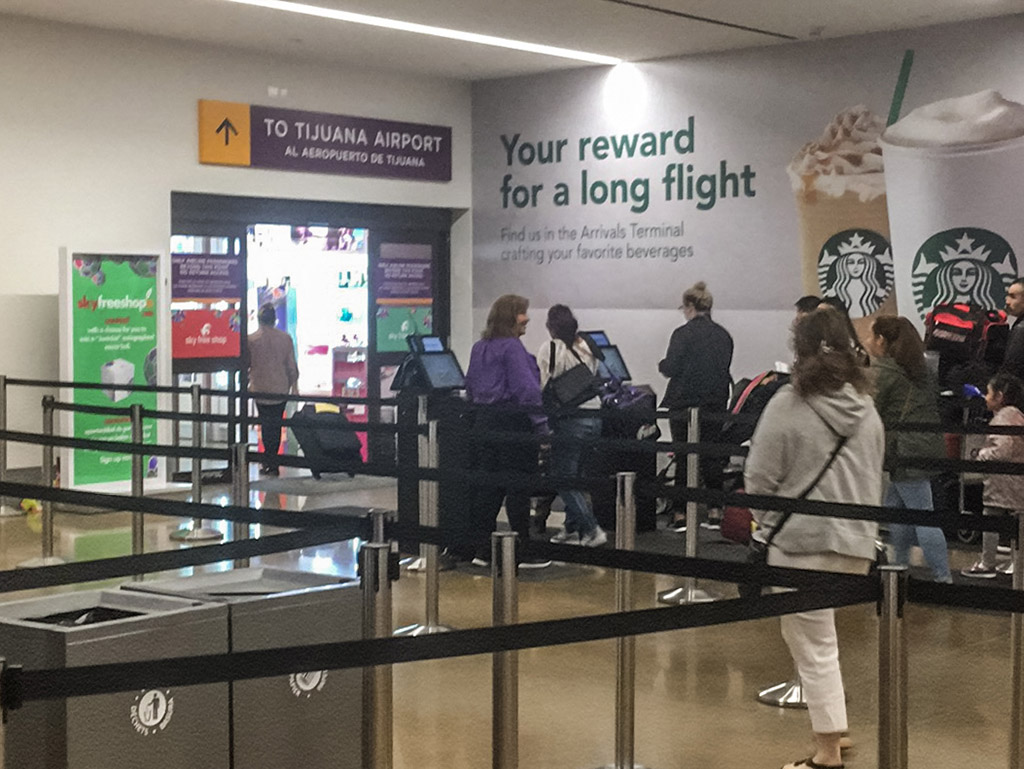 Access to the Tijuana airport from San Diego is super easy via the Cross Border Xpress (CBX). This is the main entrance, complete with a gentle reminder from Starbucks that no trip begins (or ends) without spending $7 on a cup of coffee. 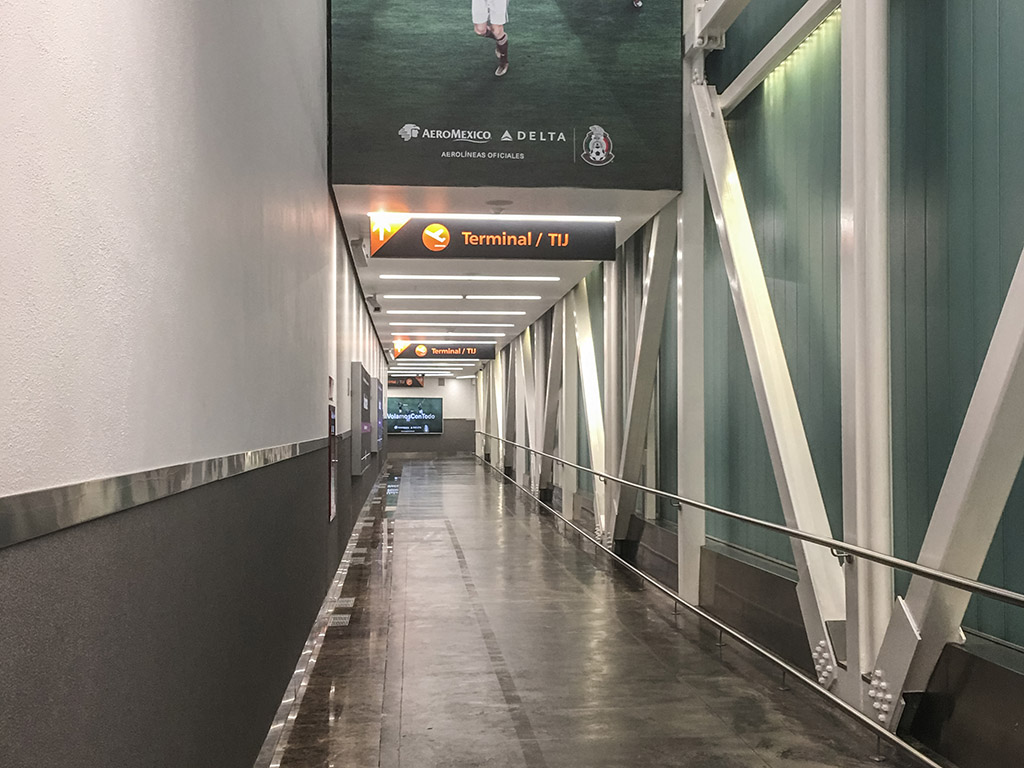 Walking across the bridge to TIJ. The nice thing about this is the fact that it’s always this empty no matter what time of day it is. But don’t tell anybody, because I’d hate to see this place get really crowded and too frustrating to use. 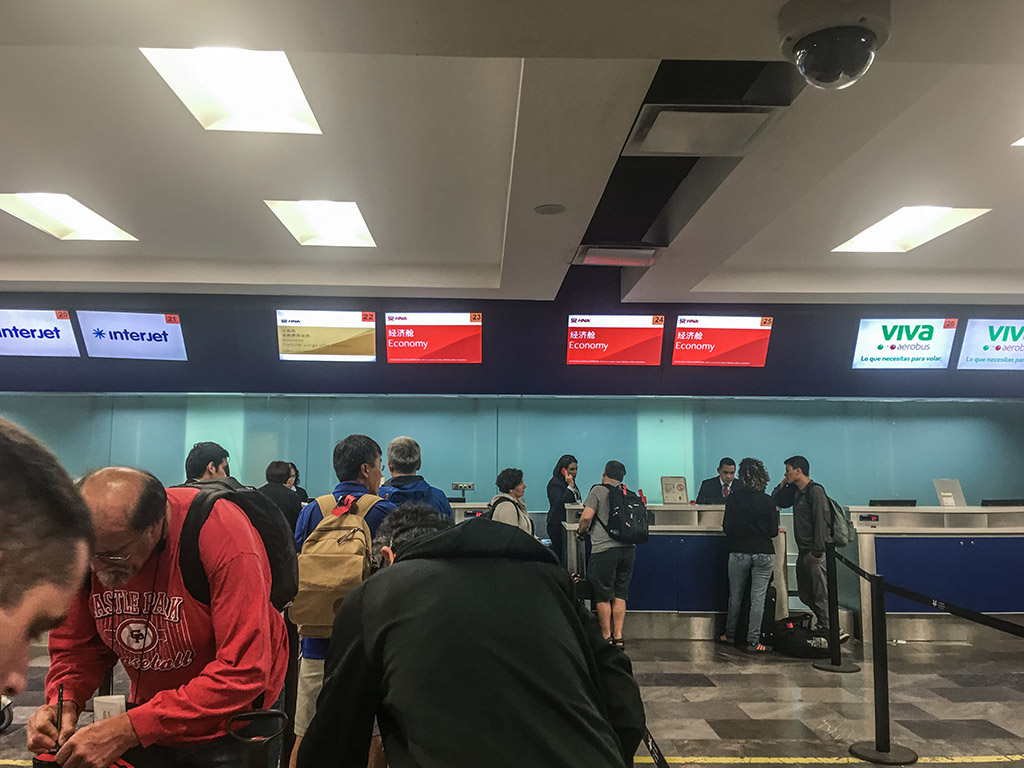 The Hainan Airlines check in counter, flanked by Interjet and VivaAerobus. 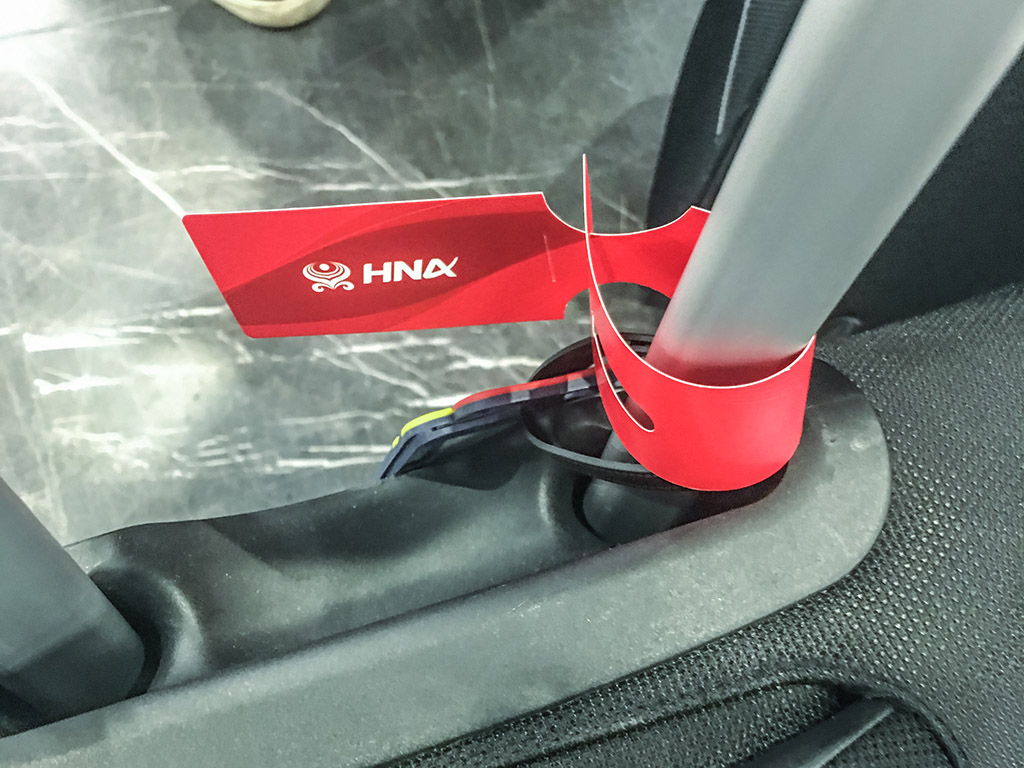 And the SANspotter “Best Luggage Tag” award goes to…Hainan! That looks pretty cool, and not just because it matches my red travel shoes. 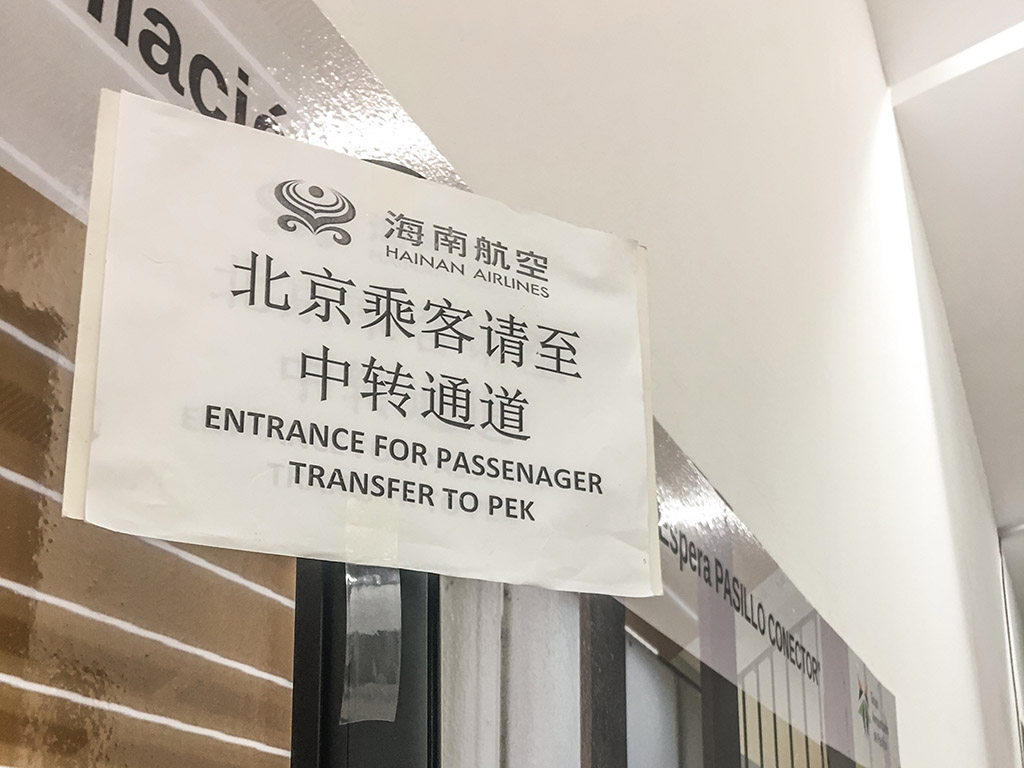 Just follow the signs to the gate. Considering that this flight is scheduled to depart at 3:45am(!) and most humans are total zombies at that hour, it’s no surprise that the signs contain spelling errors. 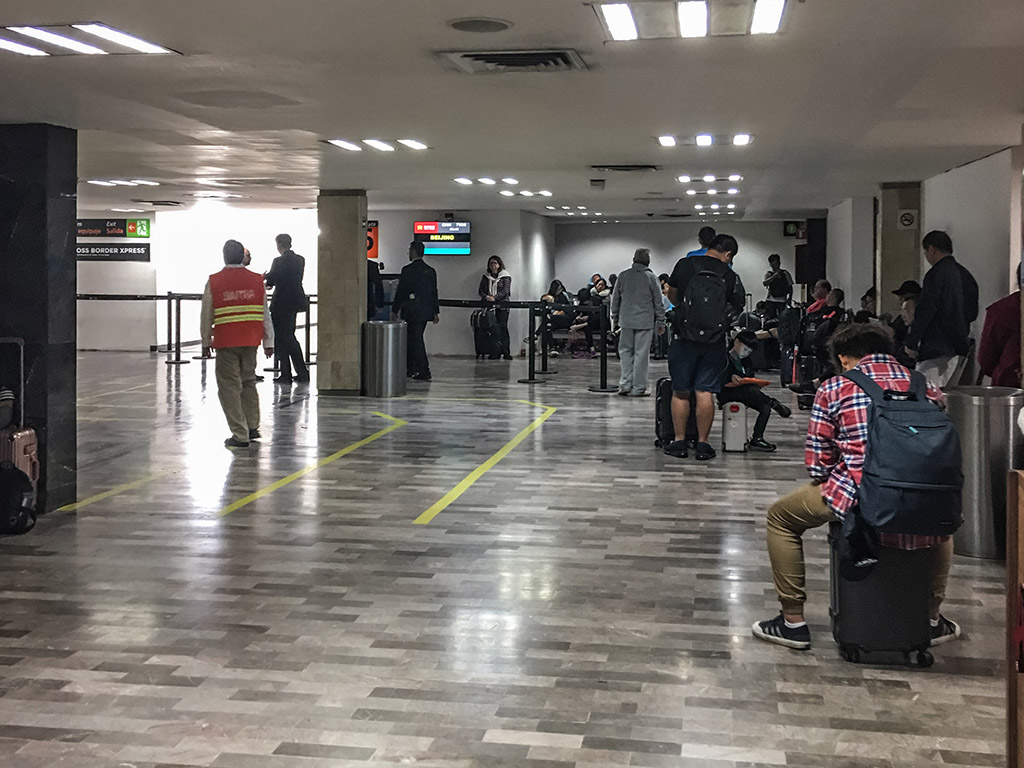 There are certainly worse places to be in Tijuana at 3am. Mad props to Yuxuan for having the strength to stay awake while waiting to board the flight… 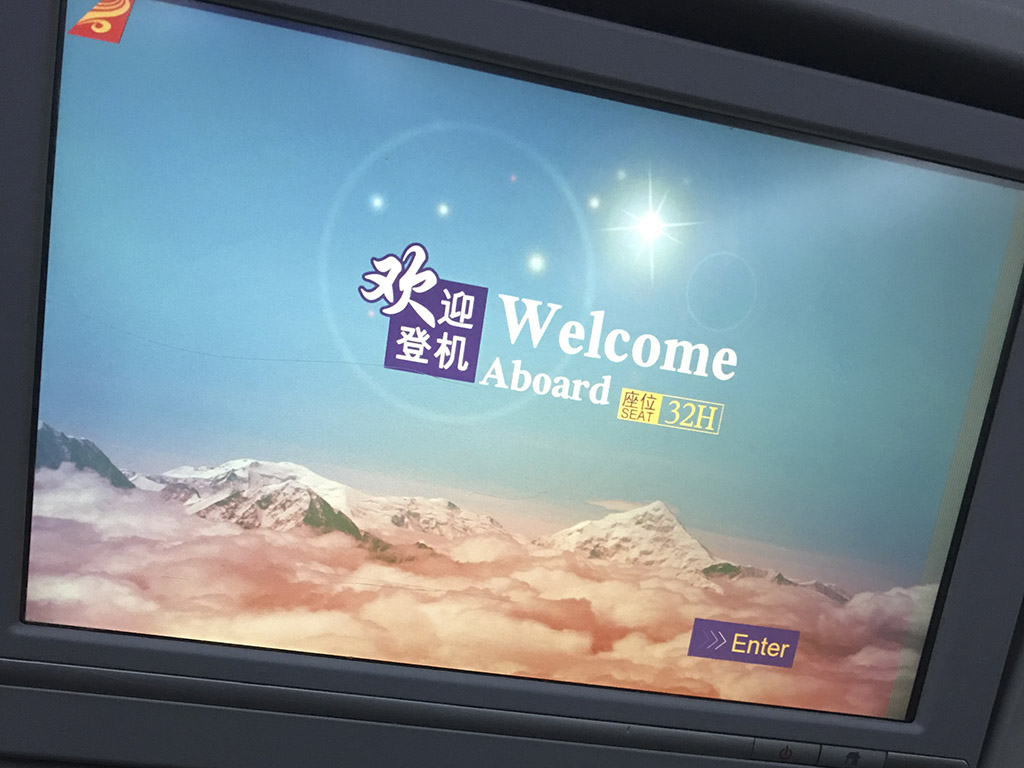 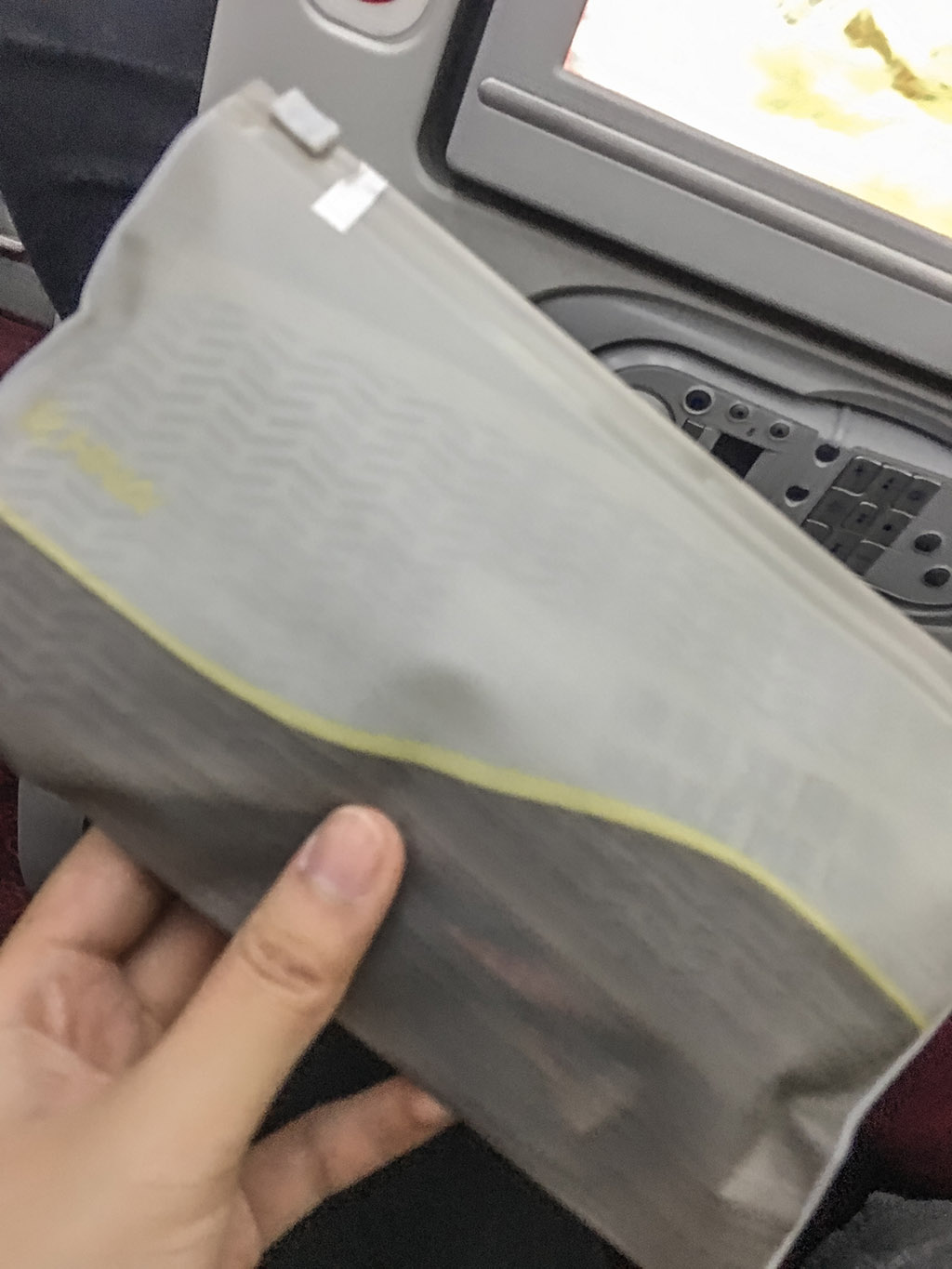 Amenity kits, even in economy class! I wouldn’t have expected this at all so that’s definitely a plus. 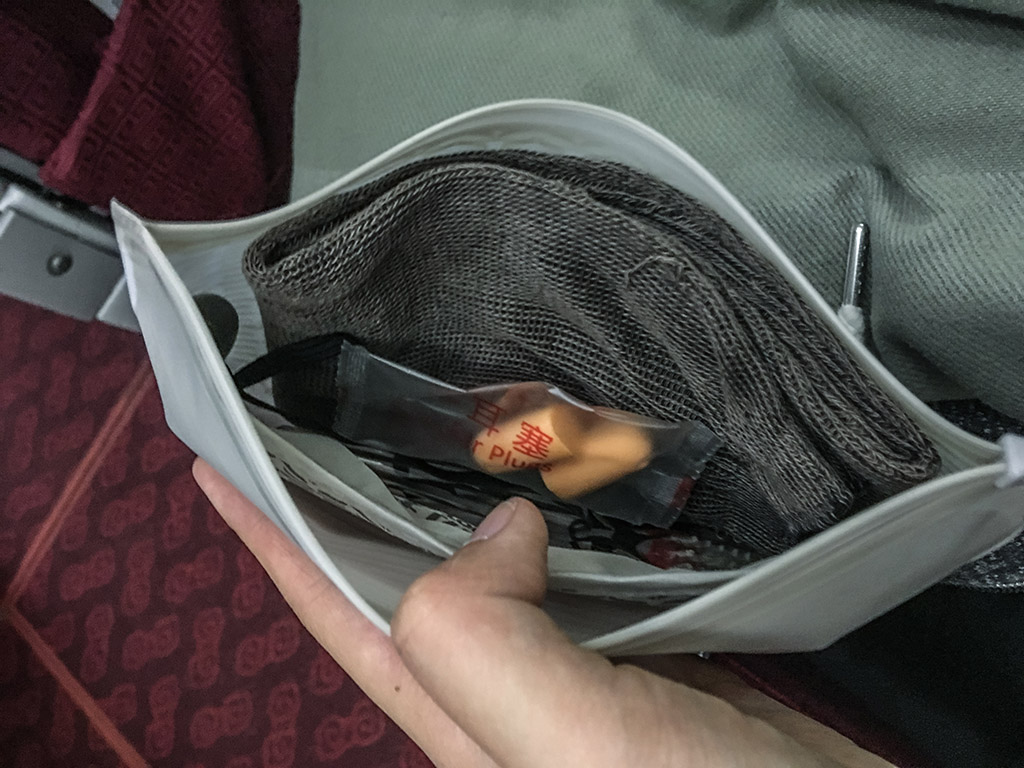 Looks like we’ve got some earplugs, socks, and an eye mask. Perfect swag for a 3:45am flight. 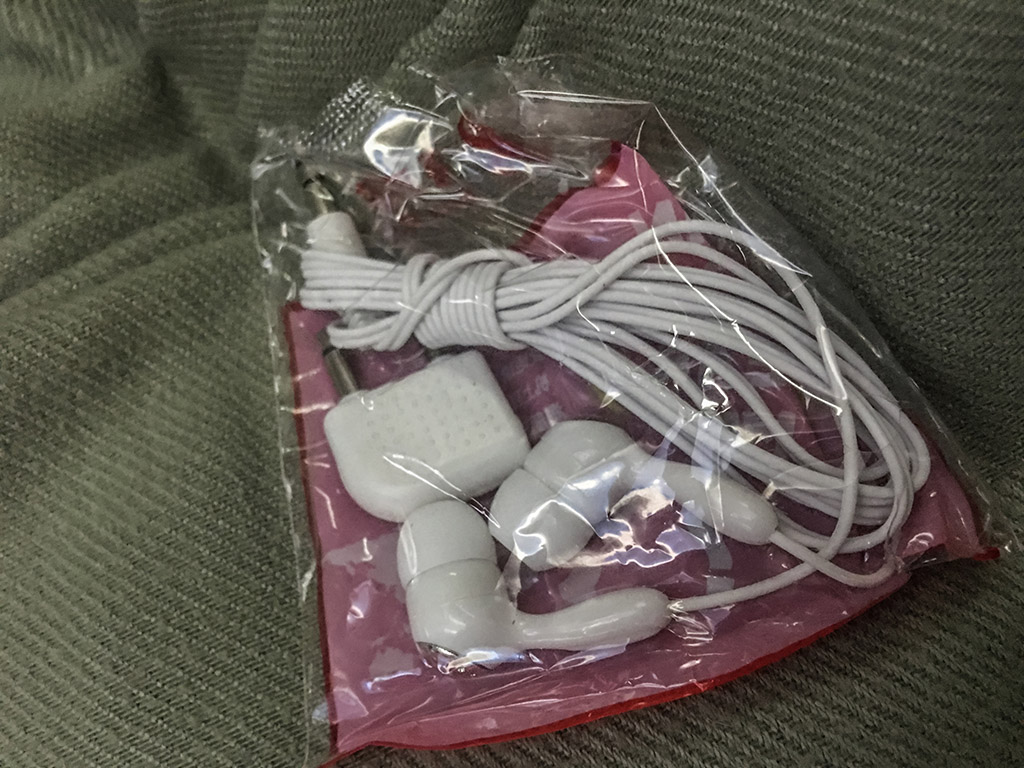 Earbuds too, for the zombies on board with superhuman strength who aren’t planning on sleeping. 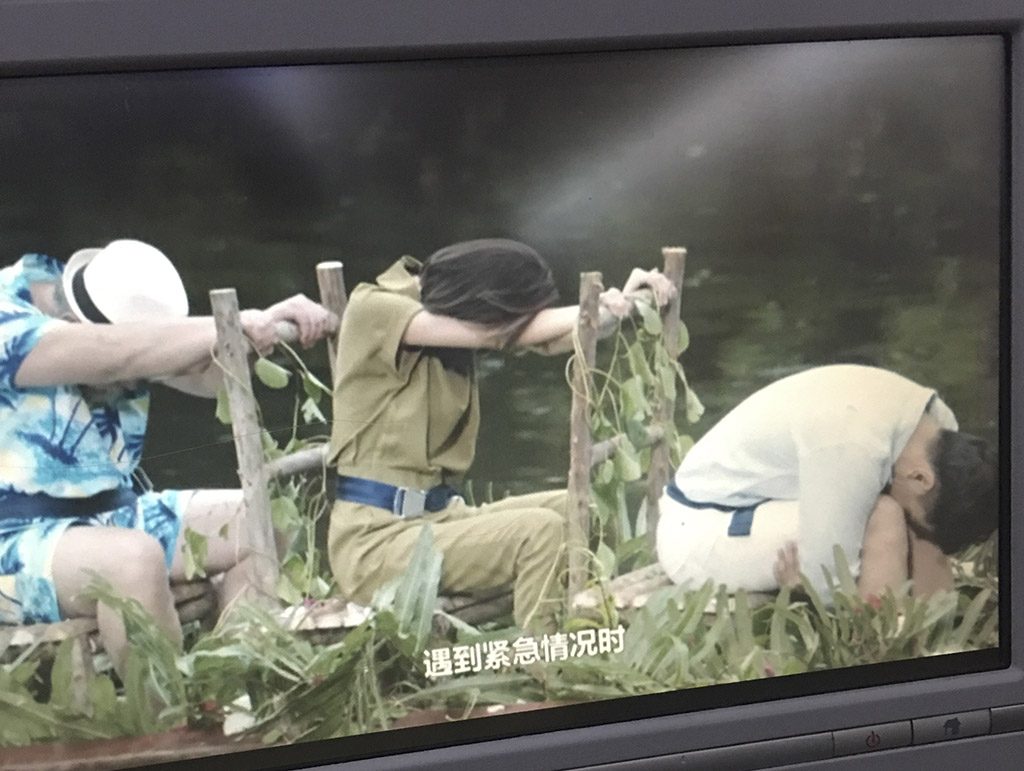 There are a lot of reasons why I want to try Hainan Airlines, one of them being this awesome looking safety video. Oh, the captions I could write for this… 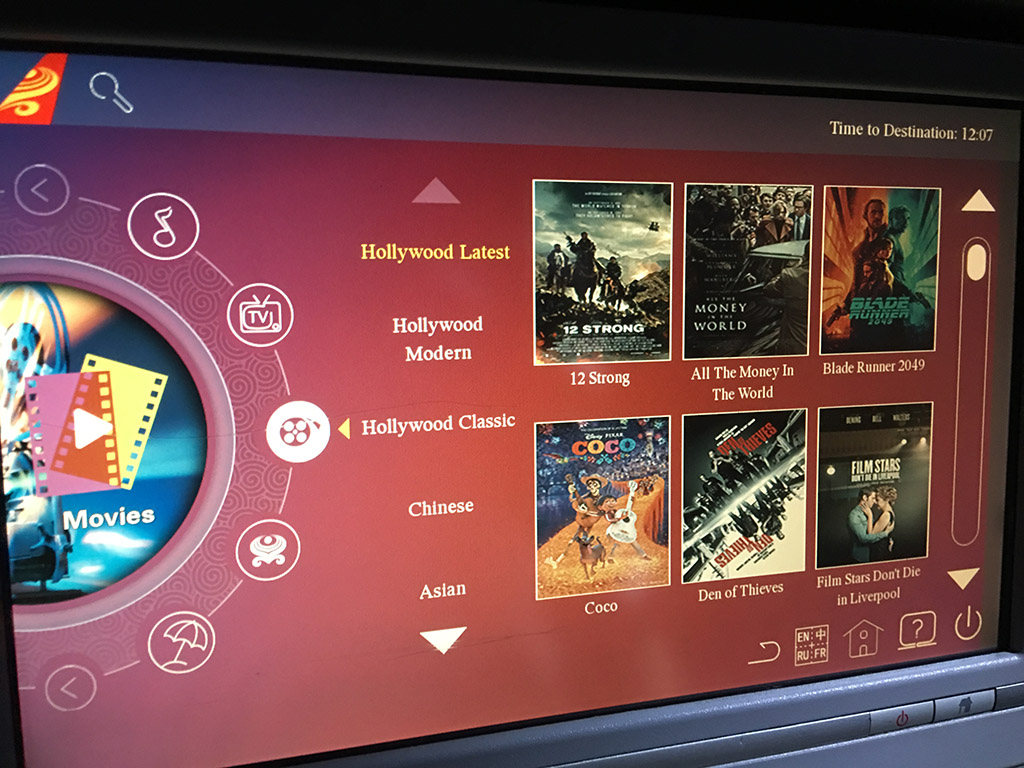 The rest of the entertainment system looks pretty good as well, stocked with loads of good movies and TV shows. Too bad you’ll be sleeping for the majority of this flight and not watching any of it. 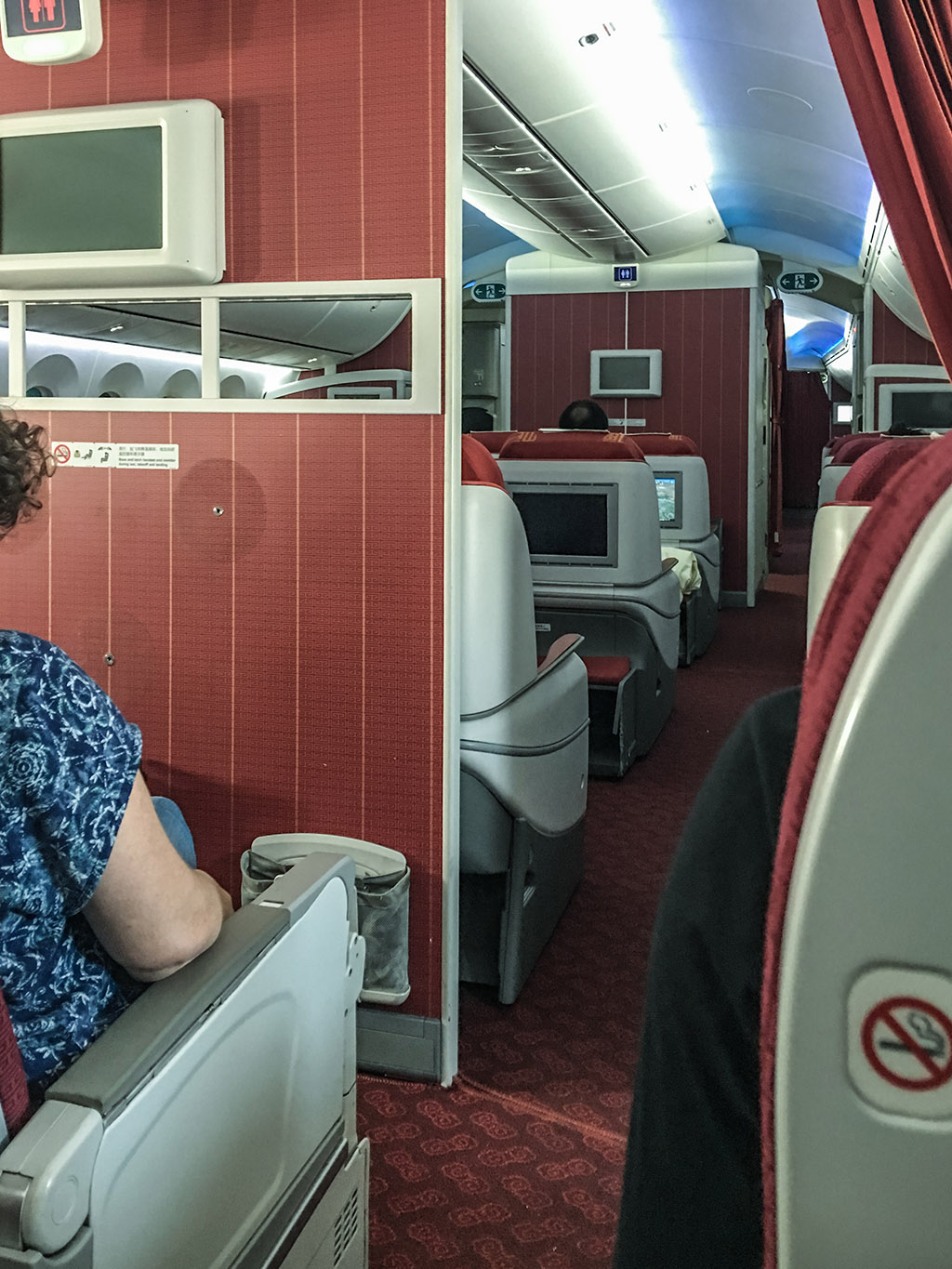 A quick peek at business class from row 32. On a side note, I’m totally impressed that there are no limp bodies hanging over the armrests and strewn about the aisles yet. How the heck are people staying awake?? 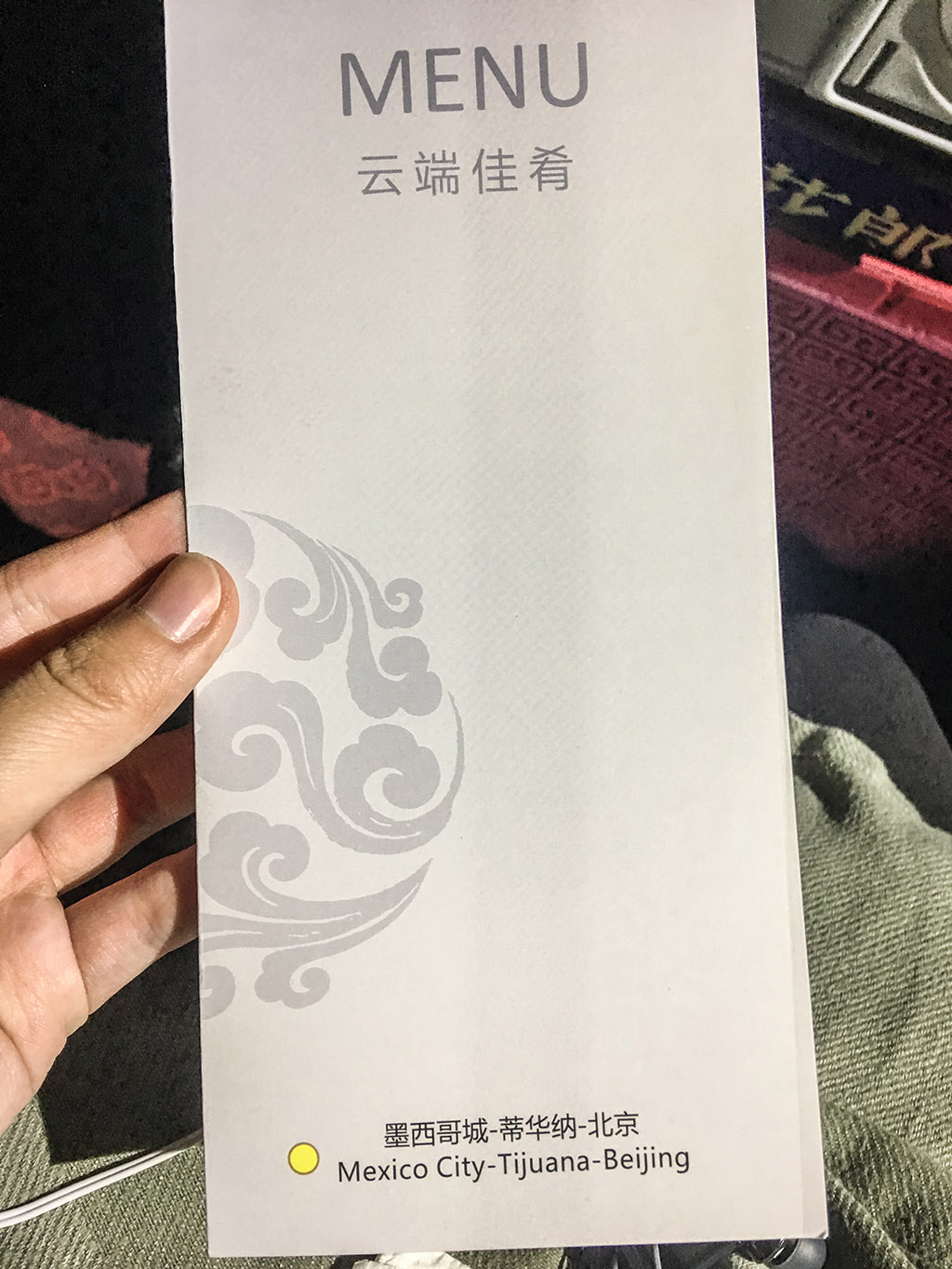 Let’s have a look at the menu… 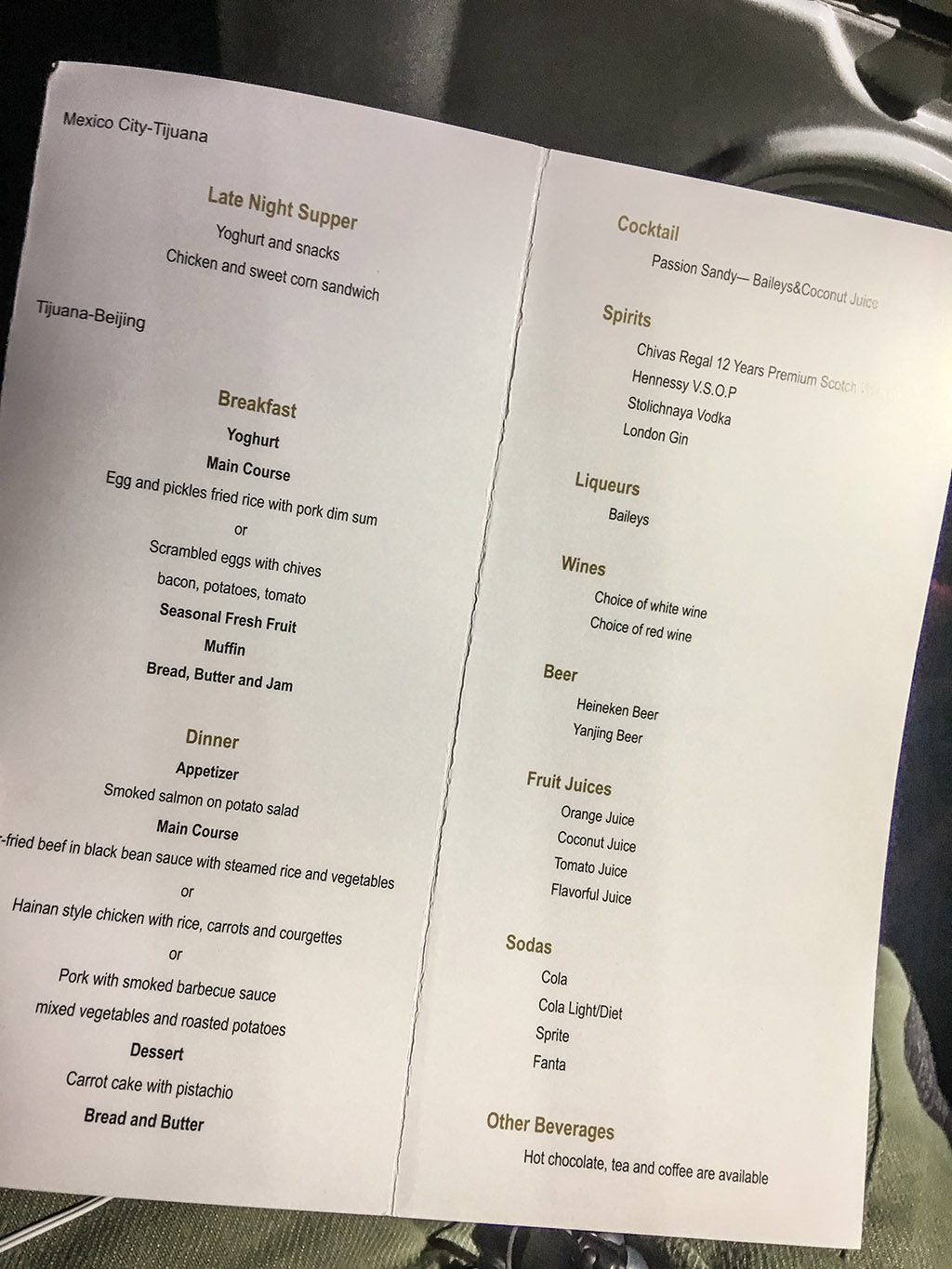 Breakfast comes first on the Tijuana to Beijing segment, followed later in the flight by dinner. Completely backwards from any other international flight that I’ve ever been on, but then again nothing is normal when you depart at 3:45am. 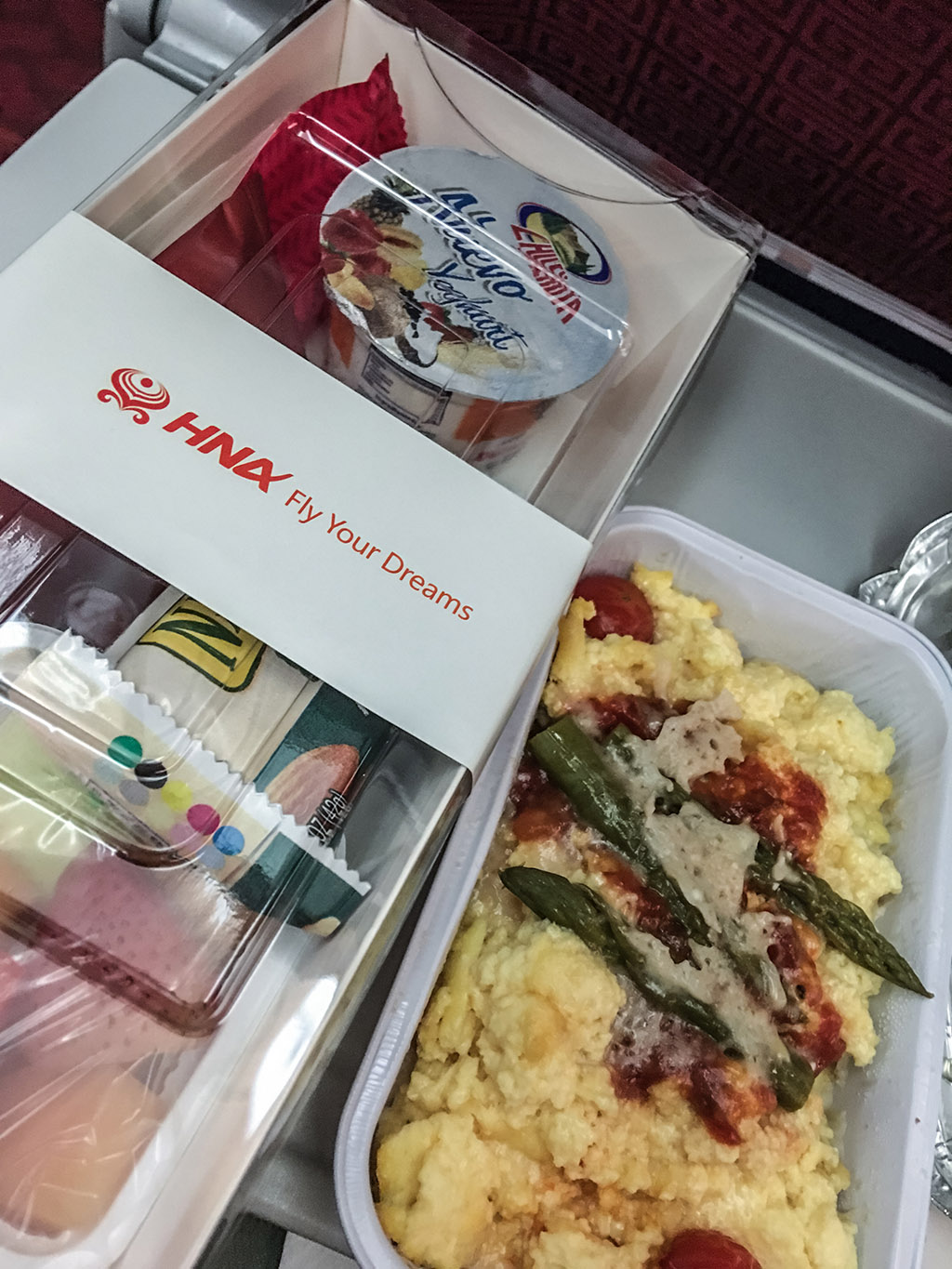 Looks like Yuxuan went with the scrambled eggs option. A fine choice it was, but I don’t think I could’ve resisted the dim sum. 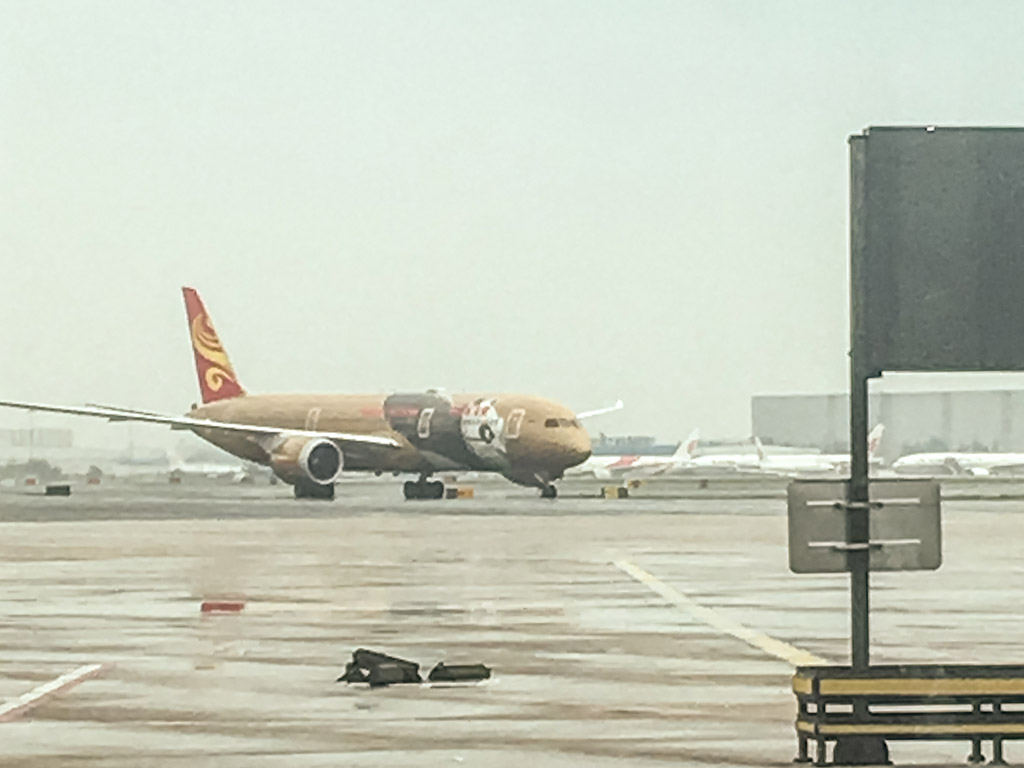 Arrival in Beijing, with one of Hainan’s panda-livery 787s rolling by. I know that Yuxuan was hoping to get a ride on one of these, but I’m just thankful that she didn’t because (as I mentioned earlier) it would’ve been a total pain to illustrate for this mini trip report! lol

There has been a lot of speculation as to why Tijuana to China flights exist in the first place, but it makes a little bit more sense when you realize that they originate and terminate in Mexico City – so it’s not like Hainan and AeroMexico are trying to fill these flights to the brim with local Tijuana traffic. Both flights are effectively fuel stops, with the added benefit of picking up dropping off a few extra passengers along the way.

Interestingly enough, Yuxuan said that the flight was full and about 70% of the passengers onboard originated in Mexico City. That’s exactly the kind of passenger split that I was expecting, and when it comes right down to it, it’s pretty impressive to think that Hainan can fill 30% of a 787–8 with local Tijuana traffic on a daily basis. A quick check of ExpertFlyer reveals that it’s pretty consistent too, and this flight goes out full on a regular basis.

Another benefit of stopping in Tijuana is the opportunity to attract travelers to and from San Diego. After all, with the opening of the Cross Border Xpress, it’s now very quick and easy for both SD residents and visitors to access Tijuana International Airport. It’s so easy as a matter of fact, that I personally consider TIJ as a secondary San Diego airport that I’m more than happy to use at any time (as I recently did for my trip to Cancun). Considering how stubborn and lazy I can be, that says a lot.

What do these Tijuana to China flights mean for San Diego?

In my mind, this ease of access to TIJ causes a potentially big problem. You see, if the airlines are having success filling flights to Asia from Tijuana with local San Diego traffic, will they even feel the need need to serve San Diego International Airport at all? I’d imagine that operating costs in and out of TIJ are a lot less than they would be compared to SAN, so as an AvGeek and frequent traveler based in San Diego, it worries me that other international airlines might see TIJ as the more attractive option for new service to SAN.

Let’s just hope that other potential new Asian carriers see the success that Japan Airlines is having with their nonstop service to NRT, and use that as a guide to determine whether or not serving San Diego proper is the right choice. I’m willing to bet that in most cases, it is.

Anyway, how about a huge round of applause for Yuxuan and her generosity for sharing these pics with us? This is a flight that I have been deeply curious about since day one, and it’s neat to finally get the chance to see what it’s actually like.

And yes, I am planning on trying this flight eventually – but I’m not going to lie when I say that the 3:45am departure time makes me instinctively start looking for other (more reasonably timed) options! I don’t know about you, but I’m not at my best at that hour and that doesn’t usually mix well with trying to get good content for trip reports. Fingers covering my camera lens, forgotten memory cards…it wouldn’t be pretty.

Perhaps if I can do it in business class, I might be able to put together a full trip report for this without making too many silly mistakes. As a matter of fact, there are some really attractive business class fares for Hainan 7926 over on CheapAir.com right now that are sooo tempting…