Writing a travel blog can be really stressful at times. In my particular case, based on analytics and conversations I have with my readers, I’m getting the sense that most of you are here for the airline stuff – which is perfectly ok. That’s my passion as well (which makes it very easy for me to create the airline reviews), but I’ll admit that it stresses me out a little bit when it comes to thinking of other types of content that will keep you airline enthusiasts entertained. I know it’s impossible to please everybody, but trying to figure out what to (and not to) include in my trip report series is the kind of stuff that keeps me up at night.

It was because of this that I didn’t really know how I was going to write about my time on the ground in Beijing. I consider this blog to be somewhat of a personal journal of mine, so I thought it was really important to document it in some way. Additionally, I usually like to plan ahead and have an idea of what I’m going to write about before I even reach the destination so that I know what kind of content (in the form of pictures and video) I need to get, but this trip to Beijing was killing me. I just couldn’t think of a strategy and I almost thought about nixing it altogether.

Thankfully travel is all about experiencing new things and dealing with the unexpected. There’s no way in the world I could’ve imagined some of the things that I experienced during this trip, so I guess it was kind of stupid for me to try to figure out what to write before I even got there. I arrived in China having absolutely no clue what I was going to write about, but it was crystal clear to me by the time I left.

Based on everything that happened, I came to the conclusion that the best way to explain my time in Beijing was to compare it to the 1969 Apollo 13 mission to the moon. For those of you who are unfamiliar with that mission, all you need to know is that it was a mission that didn’t go quite as planned, and it was the result of rapid creative thinking which helped to bring the astronauts home alive. Now, I’m not saying that I was in danger of losing my life at any point during this trip (except maybe for the taxi rides to and from the airport), but I couldn’t help but to laugh when I realized that everything that happened was kind of like a lot less serious version the 1995 Apollo 13 movie directed by Ron Howard.

As I mentioned in the trip report about the flight from Narita to Beijing, I had a momentary lapse of intelligence which led me to completely forget to unplug my iPhone charger from the outlet between the seats as I walked off the plane. 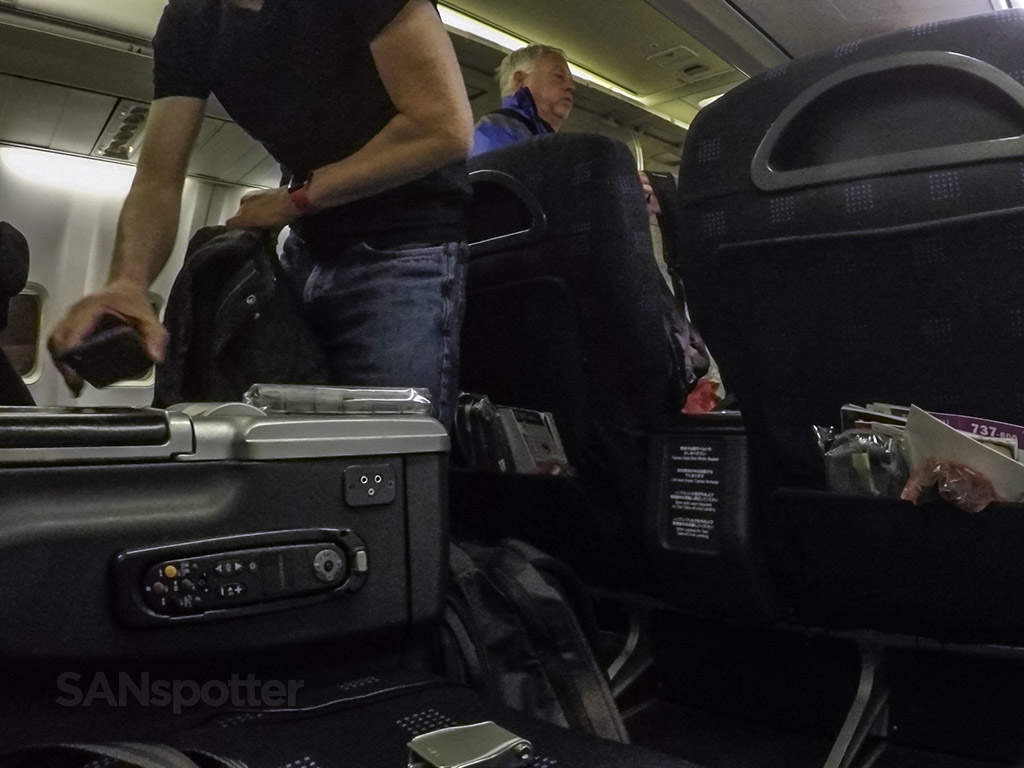 Just a picture of me being forgetful and careless, oblivious to the fact that my iPhone charger is still plugged in between the seats. How was it even possible to forget about what was possibly the most important thing that I brought along with me on this trip?

It wasn’t until I had arrived at the hotel later that evening that I realized the mistake. I frantically dug through my backpack, all the pockets in my jacket, as well as the pockets of my jeans 10 times each. It was a sinking feeling to realize that the lifeline to my world (my phone) was just about dead and I had absolutely no way to recharge it. Everything was on that phone. My itinerary, communication with friends and family, and important things like maps which would help me explore the city the next day. Without my phone and that precious data, things could’ve become very difficult very quickly.

Compare that with the astronauts of Apollo 13 (who admittedly had it horrifically worse than I did): they were stuck floating around in a powerless craft in outer space, and thier only hope of returning home safely at that point was fully dependent on a very limited amount of power from damaged battery packs. Those batteries were all the astronauts had at that point, and they knew that they needed every single ounce of energy from them in order to make it home. But they also needed things like communication with Mission Control, heat, and small bursts of thrust to keep them (somewhat) on course. Without battery power, none of that was possible.

Assessing the situation. How crazy is it to think that our phones have more computing power than what was in that entire spacecraft?

They kept their spacecraft completely powered down most of the time, and only powered it on when absolutely necessary for communications and slight course corrections. It became a delicate dance of turning it on, quickly doing what needed to be done, and then powering off as fast as humanly possible in order to conserve valuable power.

I found myself doing exactly that with my iPhone for the first 12 hours of this trip. For example, letting my family know that I had safely arrived was very important because I didn’t want them assuming that I was lying dead in a ditch somewhere if I didn’t check in. So I turned on my phone, fired off a quick text message, and then quickly turned it off as fast as I could. I was down to 30% power that point, and it needed to last me two more days at least – which would typically only last about four hours or so in normal use. I thought long and hard about each time that I needed to use it for something, and I only turned it on for the most important things. Never since 2007 (when I got my first smart phone) have I ever understood the importance of being connected more than I had at this moment.

It’s pretty scary to think how dependent we have become on these devices. I felt embarrassingly lost without it!

Part of me actually wishes that I wasn’t able to find an iPhone charger the next day in a store less than a two minute walk from my hotel (lol). I mean, think of the stories I’d be able to tell right now about the adventures of making an iPhone last an entire weekend on a single 30% charge. Now that would be entertaining content!

Thankfully Beijing is a bustling modern city with electronic shops full of iPhone chargers for sale all over the place. Disaster averted.

2. Finally, after many years of preparation, it was time to go to China

I’m not sure exactly what it is about China that makes me think of it so highly, but for my entire life I’ve considered it to be a destination synonymous with “world travel”. If somebody would’ve told me that they were going to the Bahamas for vacation, it wouldn’t have impressed me nearly as much as saying that they were going to China instead. For example, when I was in my teens, I considered visiting China as some really serious shit – people who went to China were hard-core travelers and the ones that I looked up to the most. There’s just something so exotic and different about Chinese culture that has always fascinated me, and I had always thought that if I could visit China and get around OK on my own, I’d be a bonafide world traveler myself. Sounds cheesy, I know, but those are the kinds of things going on in my brain.

OMG I’m really here! This place (Tiananmen Square / Forbidden City) was burned into my memory after the 1989 student protests, and to finally see it in person was kind of a big moment. Oh – and props to the college student who hustled me out of $30US for buying one of her paintings near here. Her sales pitch was good, and from one entrepreneur to another, I couldn’t help but to support her and make the purchase.

My fascination with China was similar to primitive man looking up at the moon from earth long ago. They could see it, they knew it was there, but it seemed so far away and impossible to reach. The astronauts of Apollo 13 had all of that same curious excitement as well – stepping foot on the moon was their ultimate goal in life, and it would have established them as part of a very elite group of explorers in the history of mankind. They had been preparing many years for that exact moment, just as I had been preparing (and dreaming) of a trip to China since my teens.

Everything about this China trip was fascinating to me, and it was hard not to just stand there like the tourist I was and soak it all in.

Visiting China didn’t do anything for me in terms of establishing myself as part of an elite group of travelers, but it did make me pause for a moment and feel immensely satisfied for achieving one of my biggest lifetime goals. Even if nobody else cared about my accomplishment as much as I did, I felt so proud to return home a “bonafide world traveller.”

3. The stench of cigarette smoke everywhere

One of the things I remember most about the movie was the fact that everybody was smoking. And I do mean everybody. whether it be in Mission Control, at the dinner table, in meetings, or gatherings with friends – there was a thick haze of smoke filling every scene, which almost seems comical in this day and age when smoking isn’t so widely accepted anymore (at least here in the US).

Smoking the stress away at Mission Control.

This is not the case in modern-day Beijing. I didn’t necessarily witness very many people smoking, but the stench of cigarette smoke in the air was strong wherever I went. Especially in the taxi cabs. Based on my extensive research of riding in two completely different taxicabs during this trip (ha!), I’ve come to the conclusion that Beijing taxicab drivers are serious smokers – and if you’ve got a sensitivity to cigarette smoke all I can say is that you best be prepared to deal with it.

The unmistakable haze of the Beijing skyline. Cigarette, anyone? Just step outside for a moment and inhale deeply…

Smoking is very much part of the culture in China, the same way it was part of US culture back in the 60s during the Apollo space missions. I almost felt out of place for being a non-smoker, and who knows? Perhaps I would’ve enjoyed my stay even more if I burned through at least a pack a day.

And now, back to my regularly scheduled reviews…