One of the downsides of flying different airlines back to back on separate tickets is the need to allow enough buffer time between flights so that things don’t get royally screwed up if anything gets delayed. This is exactly why I found myself with five hours to kill at MEX between my VivaAerobus flight from Cancun and my Volaris flight to Tijuana.

There are a handful of decent lounges at Mexico City airport which provide an oasis for travelers such as myself (who are in need of killing gobs of time), and I was determined to try as many as I could this particular afternoon. Unfortunately, I had complementary access to exactly none of them, which ended up being a stark reminder of how I wasn’t nearly as important as I thought I was. I really need to work on obtaining the proper credentials to access more lounges in the future, because the thought of hanging out in sterile airport terminals such as the domestic one here at MEX is a pretty scary thought.

Edit: I didn’t realize it at time, but this lounge is actually part of the Priority Pass network, which I am a member of. That membership would have given me complimentary access to this lounge, but I somehow forgot to even ask. Not something I’m proud to admit, but oh well. On with the review…

Thankfully there are a few independent lounges here such as the Grand Lounge Elite which are open to anyone for a nominal fee. Normally I don’t like paying for lounge access, but with five hours to kill I figured it would be worth the cost – if only to get some interesting content for the blog. At least I hoped it would be interesting, as I was very curious to see what a generic airline lounge at Mexico City airport is actually like. 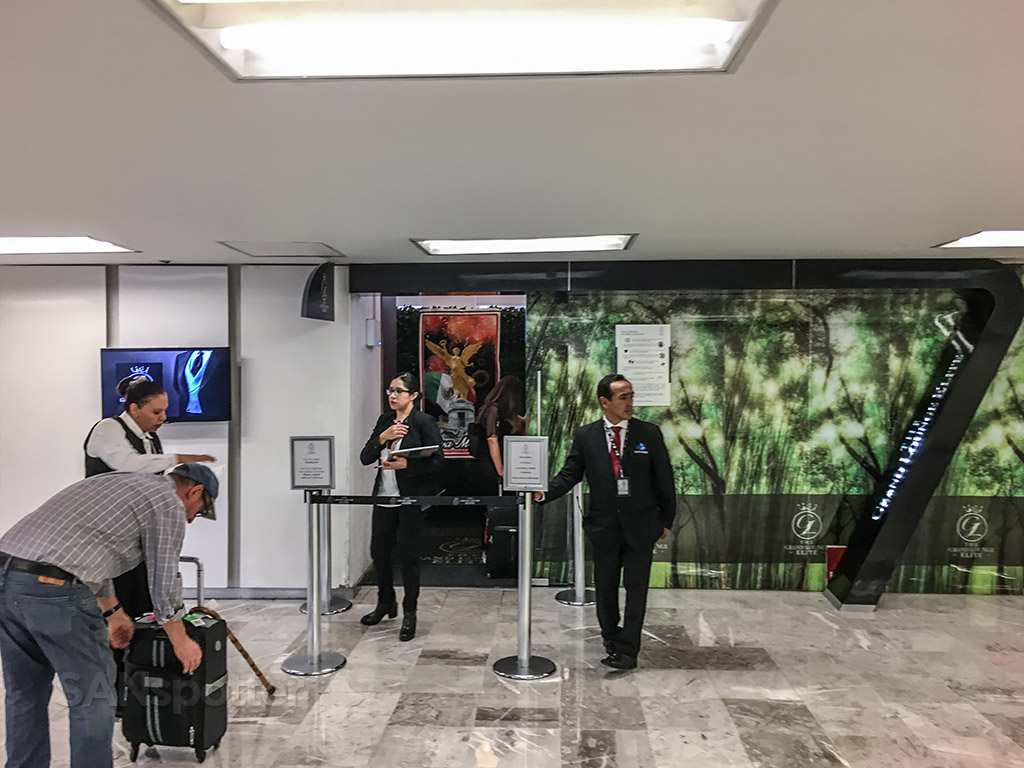 The main entrance to the grand lounge elite. A bouncer and a host out front, which implies there is something special happening through those doors…

The entrance to the grand lounge elite was interesting, if only because it felt like entering a seedy night club on the outskirts of town. Of course that didn’t stop me from going in (lol), but I couldn’t help but to think that I was making a big mistake as I approached the front desk and asked to purchase a day pass. I was told that it cost $30, and that the time limit was three hours. A time limit? Really? How would they even enforce that? I’ve never seen anybody kicked out of an airline lounge before, but I was half tempted to push the limit just to see what that kind of situation is actually like. “I’m sorry sir, excuse me, it’s been a pleasure having you as our guest, thank you dearly, but I regret to inform you that you need to get the **** out of here and never come back…”

Right away things felt a bit awkward. Of course the place was well-stocked with decent food and a very friendly staff, but I felt like I was being watched all the time which prevented me from taking the amount of pictures that I wanted for this review. Everywhere I turned there were 2 to 3 staff members hovering over my shoulder, which was a bit annoying, but admittedly nice at the same time since they seemed very eager to get me anything that I needed in order to be comfortable. It just seemed odd that there was so many staff members standing around not doing much, which made it hard for me to relax in my own private solitude. 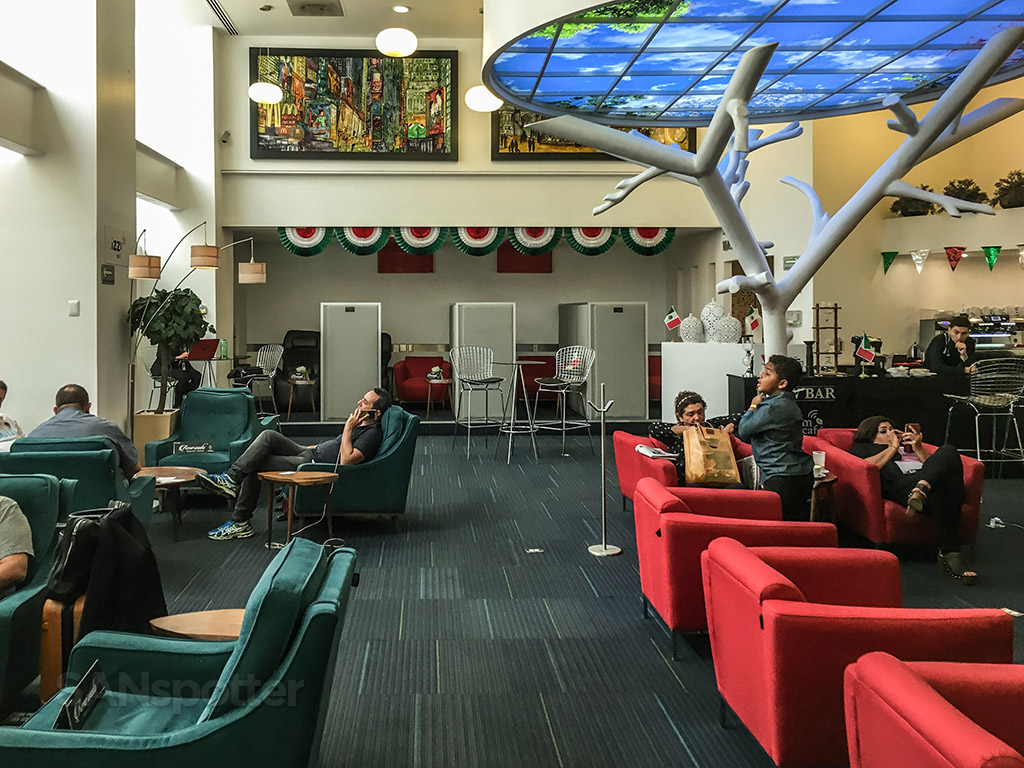 I believe the style for this kind of interior design is called “Mexican flag” – I quite like it actually! 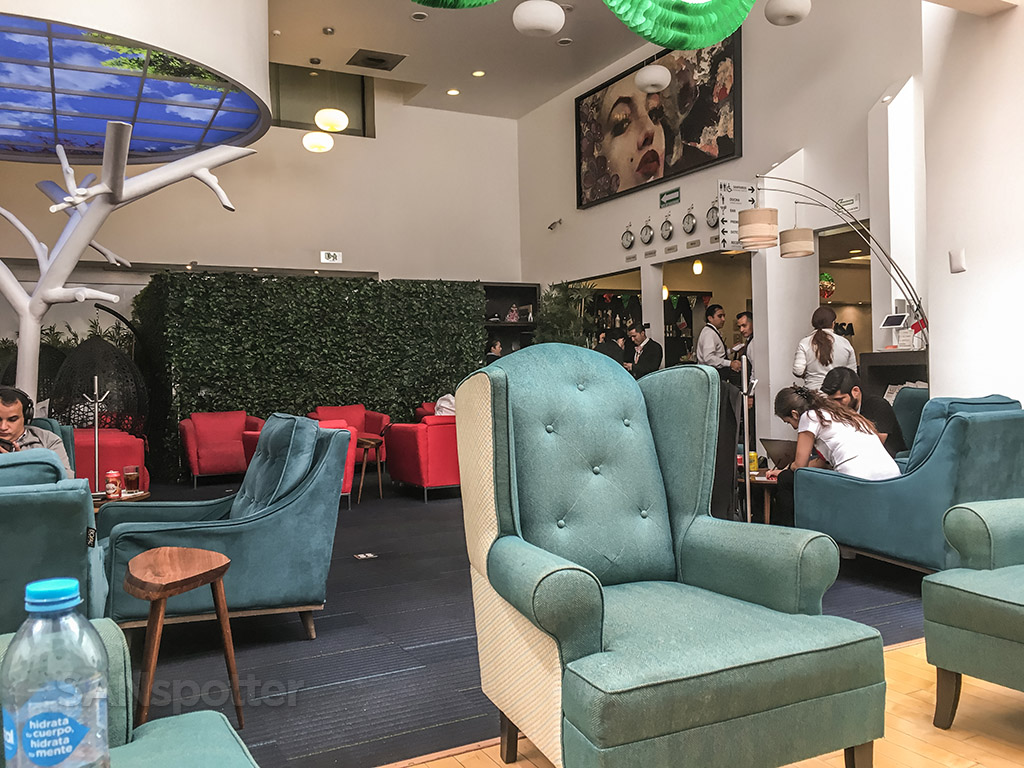 As you can see, it’s not very extravagant in here, but still a lot better than being out in the main terminal. 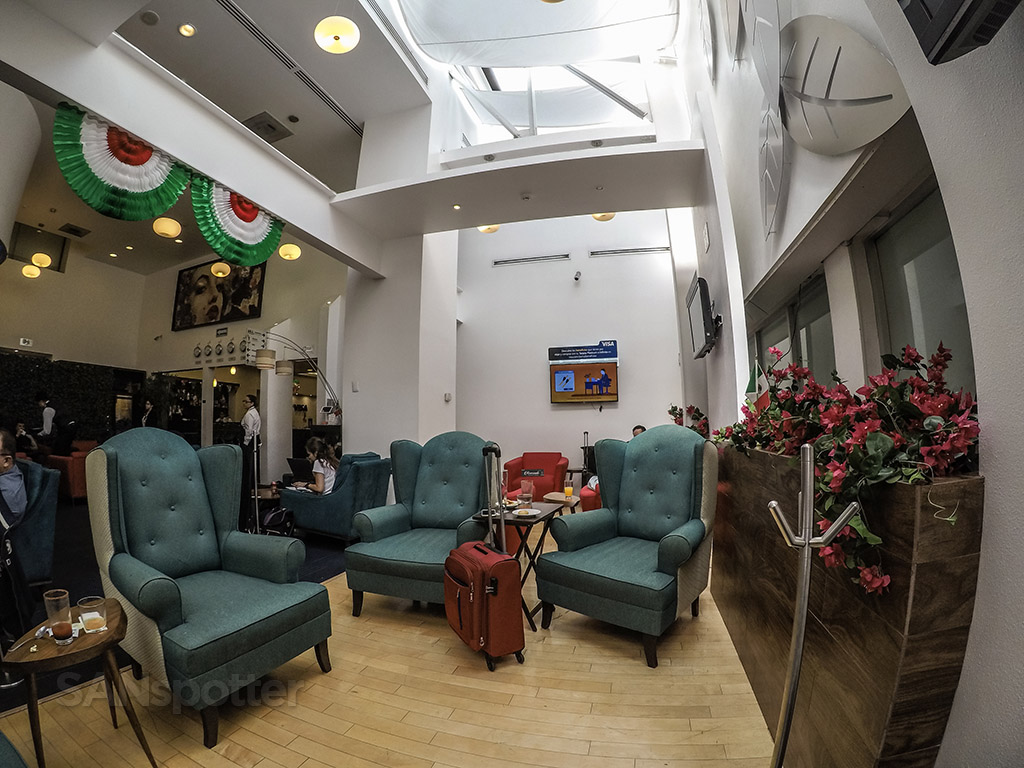 Overall I found it to be very dark and a bit on the gloomy side, but this spot under the big skylight was quite nice. 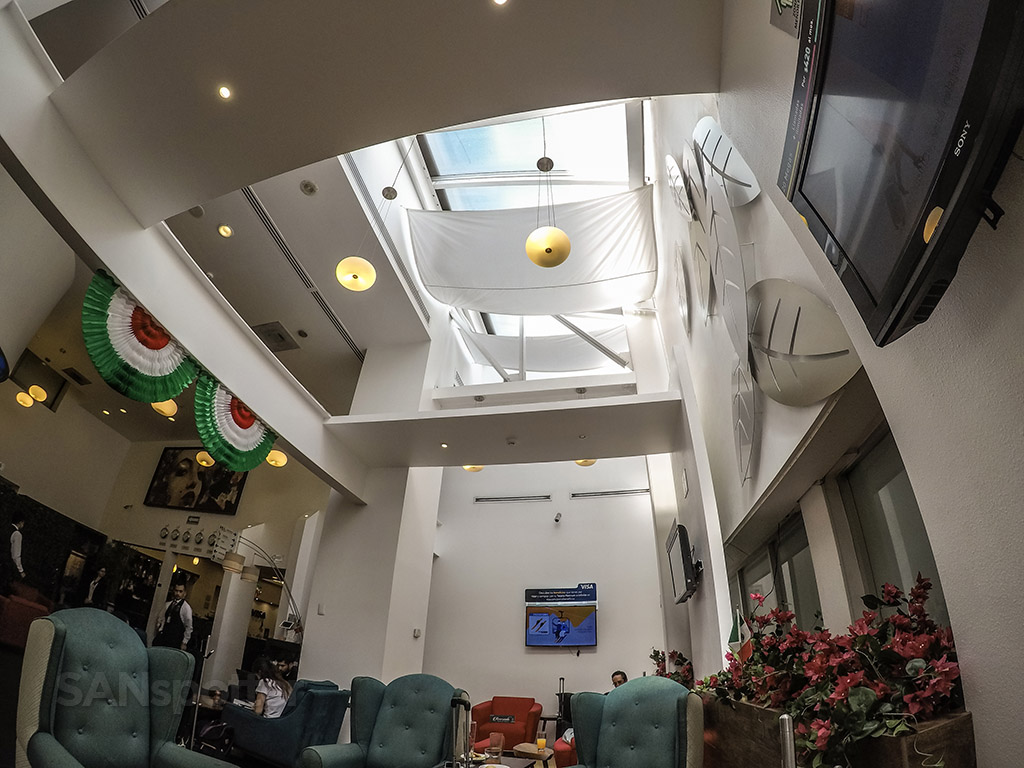 This place would feel like a dungeon without this natural light coming in. 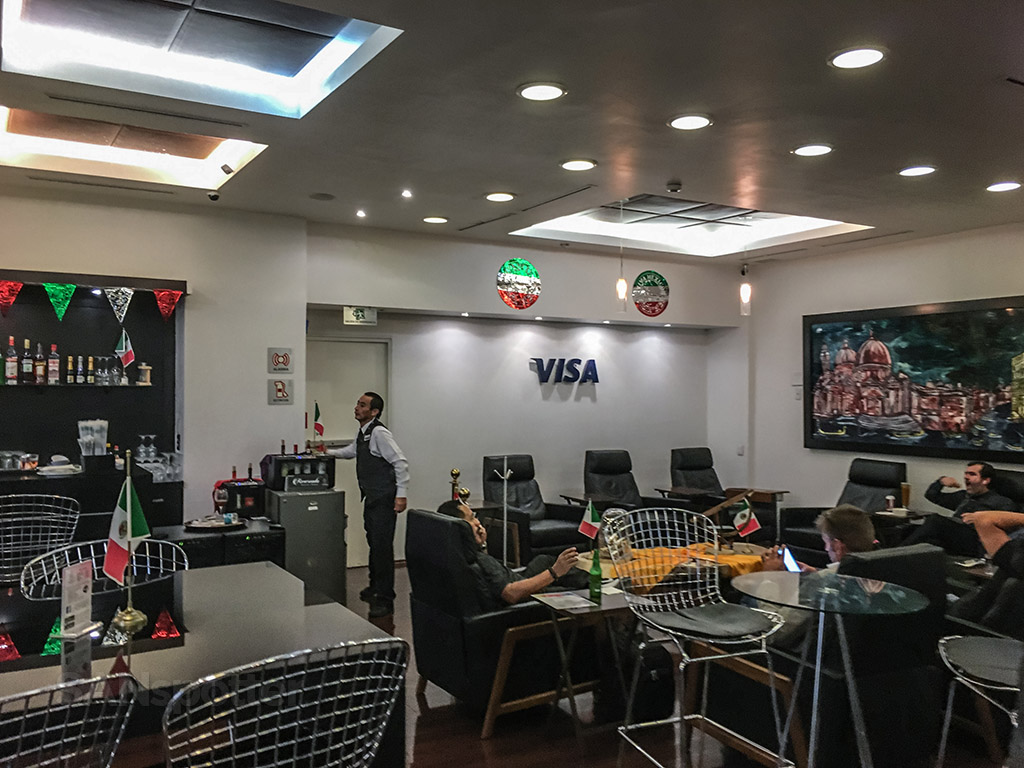 This is the bar and restaurant area, just off the main room. I love the random Visa logo hanging alone on that wall…perhaps put there as a subtle way to persuade guests to spend lots of money at the bar?

One of the best things about the Grand Lounge Elite is the food. The snacks they have sitting out aren’t much to rave about (those little sandwiches were good though), but they also have a full menu of made-to-order food which looked really good. The best part? All of it was free. I ordered a plate of enchiladas, fully expecting to have to pay extra for it, but they brought it to me without asking for payment of any kind. That’s the kind of thing I’ve only seen in higher-end airport lounges and it totally wasn’t what I was expecting here at this little hole-in-the-wall lounge at the Mexico City airport. 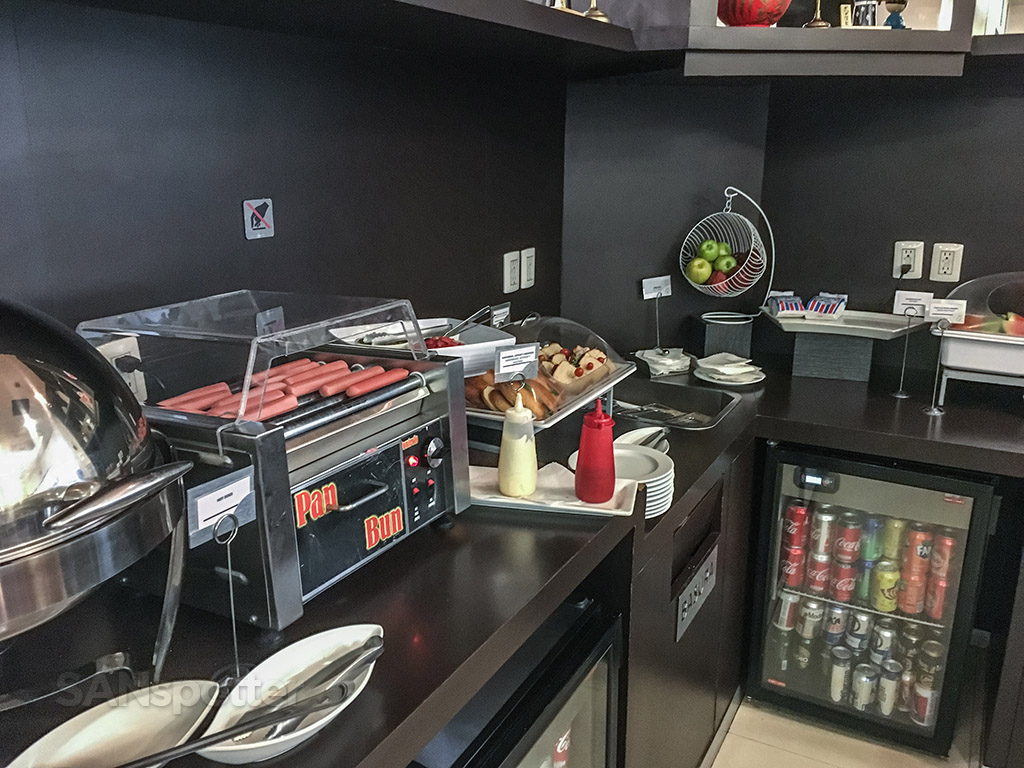 The assortment of free snacks was pretty good – lots of healthy (and not so healthy) options here, so there was something for everyone. 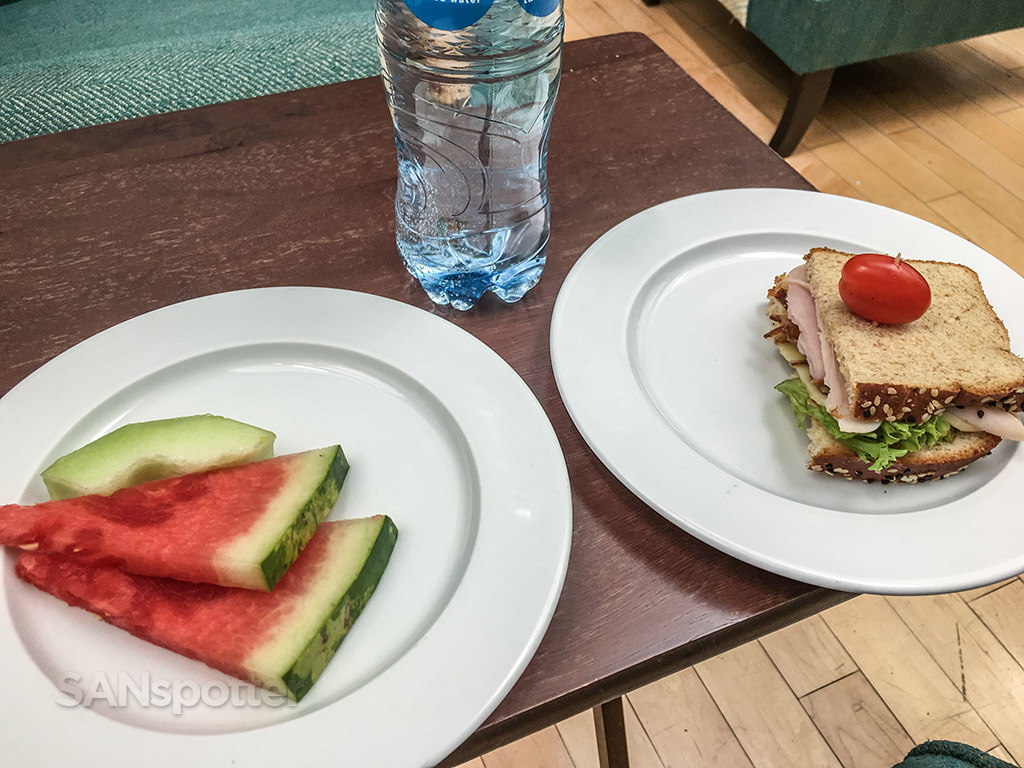 I went for mostly healthy stuff. 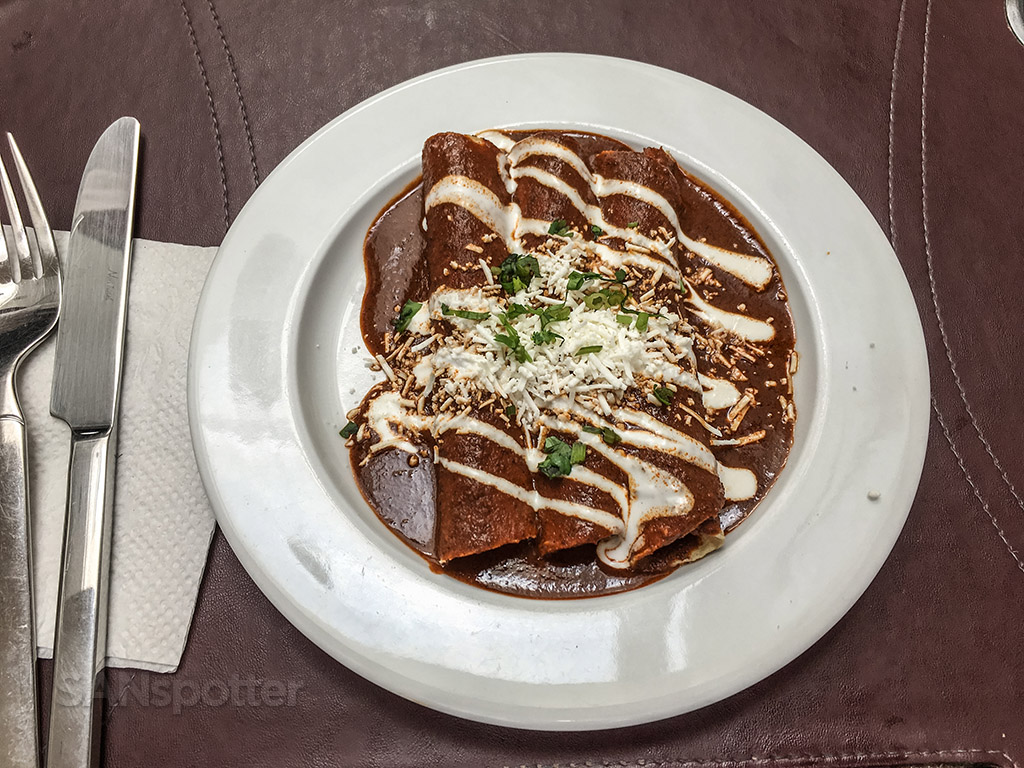 This is the plate of enchiladas I ordered off the menu. Very delicious, and delivered to me on a tray that I could sit on my lap. The service in here was awesome for being a generic lounge!

The staff is the other really nice thing about this place – despite how much they seemed to be hovering. All of them were super-friendly and kept checking on me just to make sure that I had everything that I needed. They seemed very eager to want to help, which again, is something that I’ve only seen in stuffy first class lounges. Unfortunately, all that hovering they were doing prohibited me from taking decent pictures of this place. I got a lot of weird looks from these few pictures that I took, and I almost felt like this was the first time they had ever seen a travel blogger such as myself taking pictures in here. Either that, or they were ready to confiscate my gear and kick me out for being a nuisance. I didn’t want to push my luck though, so I felt satisfied with the few pics I took and tried to enjoy the afternoon. 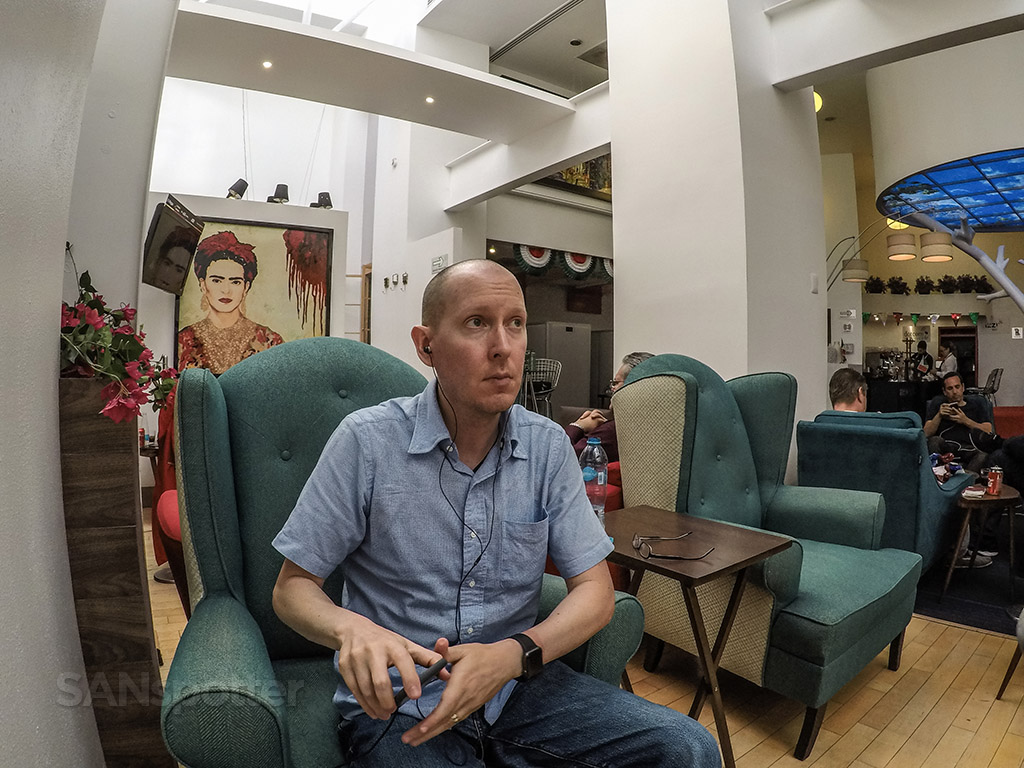 Scanning the room looking for an opportunity to take another sneaky pic. People here the Mexico City airport don’t like travel bloggers with cameras, that’s for sure.

I ended up staying for the full allotment of my three-hour time limit, and I’m happy to report that nobody came up to me to remind me that my time in this place had reached an end. How do you even kick a paying customer out of the lounge with any sort of politeness and dignity? That just goes against everything that airline lounges stand for, and while I do understand the need to kick people out who stay an entire day eating more than their fair share of the food, where did they come up with the idea that anything over three hours is squatter-level activity?

So…is the $30 entry fee worth three hours in the Grand Lounge Elite? It certainly is if you partake in ordering items off the menu. Otherwise, I probably could’ve been just as comfortable out in the main terminal at an empty gate away from the crowds.

Remember though, Priority Pass members get access to this lounge (and over 1000 others in the world) as part of their membership!