Unlike nearly every other non-family trip that I’ve taken over the past three years, I knew exactly what I wanted to do for this one even before I started making the reservations. San Diego International Airport has seen incredible growth over the past 18 months or so, with two new international carriers offering nonstop service to Europe earlier this spring alone. Edelweiss and Condor aren’t exactly considered first-tier flag carriers, but any and all new international routes in and out of SAN are highly appreciated and it was very exciting to see them both initiate service at roughly the same time. These are exciting times to be an AvGeek in San Diego!

My goal was to try them both on the same trip, no matter how it worked out in the end. I didn’t really have a preference as to which one I wanted for the outbound flight and then which one I wanted to fly back to San Diego, but all I knew was that these two flights were tempting as hell and I had to figure out a way to fly on them both during the same trip. Unfortunately, I knew going into it that I would have to pay for these flights out of my own pocket due to my complete lack of points on either airline – heck, I don’t even know if it’s possible to transfer credit card points to Edelweiss or Condor, so I approached the booking process knowing full well that I would have to shell out big bucks for it.

Shelling out big bucks is an understatement. The first thing I did was to check the prices on Edelweiss from Zurich to San Diego (it turns out you can’t originate a trip from SAN on Edelweiss – you have to start from Zurich). To my horror, I couldn’t find a single seat on any day all summer long for less than $3500 – and that was economy! My first thought was that it was pricing out so expensive because I was looking at one-way fares. One-way fares are generally more expensive than round trips, so I chalked it up as a rookie mistake and tried again. I revised my search looking for round-trip prices, and the slap in the face was it even more severe this time (and I may have actually started bleeding a little bit). Nothing for less than $7000. Damn. OK then, maybe this wasn’t going to happen after all… 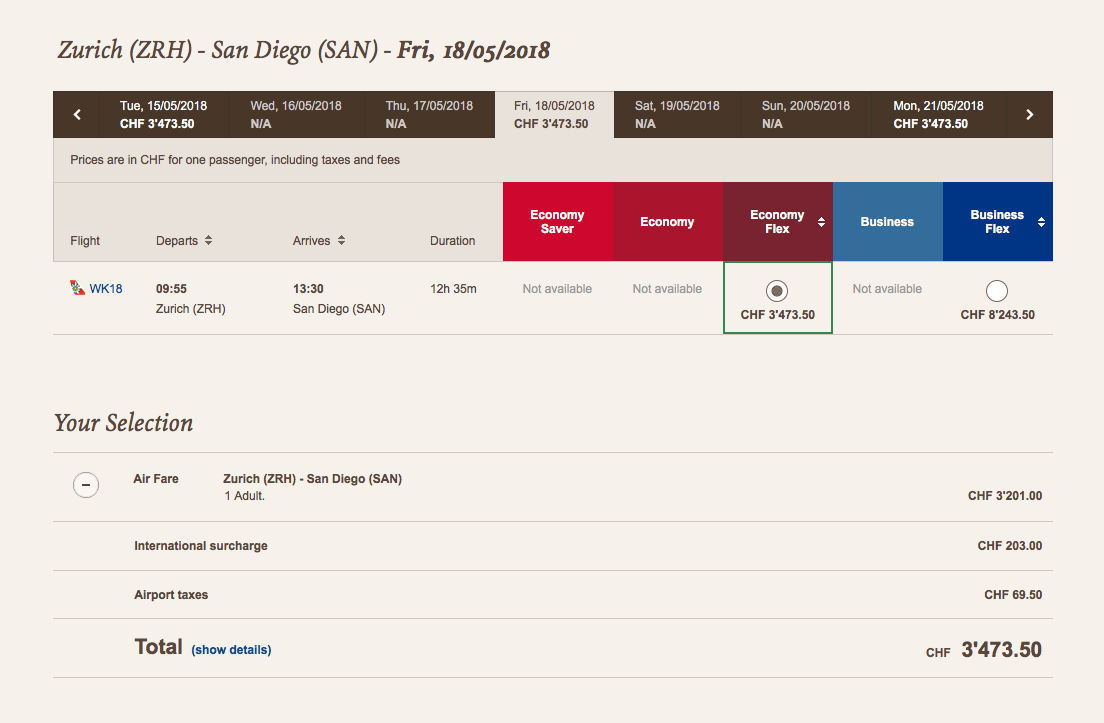 As an example of how expensive Edelweiss is to San Diego, I picked a random day during the month of May 2018. As you can see, only Economy Flex and Business Flex are available, starting at a lofty 3,473CHF (which is roughly 3,674USD). How…uh…I…uh…what? Who is actually paying these fares?

Feeling dejected, I was still curious to see what Condor prices to Frankfurt were like. I nearly shed tears of joy when I saw one-way economy fares for less than $400 on many days during the month of July. The best part? Business class was pricing out to be only $1000 on some days, which surprised me in more ways than one. First, I didn’t even know that Condor had a business class product. Second, that is one heck of a good price for business class from West Coast US to Europe in the middle of summer. Maybe this trip was on after all?

It was only on if I could find a fun way to get back to San Diego from Frankfurt. Of course I could’ve flown Condor round trip, but how boring would that be? I wanted to fly a different airline (a new to me airline) on the way home to make this adventure as interesting and fun as possible. I’ll spare you the details of what I found (and couldn’t find) on my search around the interwebs, but I eventually stumbled on an interesting award redemption on united.com: TAP Portugal from Lisbon to Toronto, and then Air Canada Rouge economy class from Toronto to San Diego.

That sounded awful tempting, even though it was pretty darn far from being considered being a dream itinerary since there were some less-than-ideal conditions that I would have to put up with. First, I needed to find a way to get from Frankfurt to Lisbon. Then there would be an overnight layover in Toronto. Finally, I’d be stuck in economy class on the final leg home to San Diego. Not exactly ideal, but this itinerary involved two airlines that I’ve been meaning to try over the years and I just couldn’t resist it – especially for only 70,000 miles (and $50.06 in taxes/fees).

TAP had some pretty good deals on business-class fares between Frankfurt in Lisbon (about half of what Lufthansa was charging), so I paid for that one out of my own pocket.

Here’s what the full itinerary looked like once I had everything booked:

Surprisingly enough, the most interesting thing about this trip had nothing to do with the flights at all. The only reason why I ended up in Lisbon is because of the business class award availability that routed me through LIS, and I’ve got to say that I felt very lucky to have had the chance to visit such an amazing city. To be honest I’ve never really had much desire to visit Lisbon, most likely because I’ve never heard that much about it. I’ve never known anyone that has spent any time there, so I’ve never heard firsthand of how nice it is. But having spent two days getting to know that place on this trip was very eye-opening for me. It’s an amazing place to visit, and my only wish was that I had more time to wander and explore. But I’ll talk more about it in that section of this trip report…

So here we go. Another business class adventure kicking off right now on a handful of new-to-me airlines. This is going to be a good one, with a few interesting surprises thrown in along the way. Let’s do it!