It’s not very often that I find myself inside a domestic airline lounge these days, but it is fun every now and then to check out the latest offerings from the major US airlines. To be perfectly honest though, I’d rather be out in the main terminal plane spotting and people watching than sitting in the lounge doing nothing. Unfortunately, while MIA is a fantastic place for people watching, it is not so good for plane spotting due to the double-layer windows in the terminals (every gate is an international gate with a segregated walkway for incoming passengers). With nothing else to do, a lounge visit seemed like a great way to kill some time.

One of the perks of my Citi Executive Visa card is that it allows me systemwide access to all American Airlines Admirals Clubs here in the US. It’s not a perk I’ve been using quite enough to warrant the $400 annual fee though, and I was seriously considering canceling the card even before this trip began. It’s a good thing I didn’t however, because I found myself at the airport here in Miami with a hankerin’ to do some lounging. Why not check out the Admirals Club? 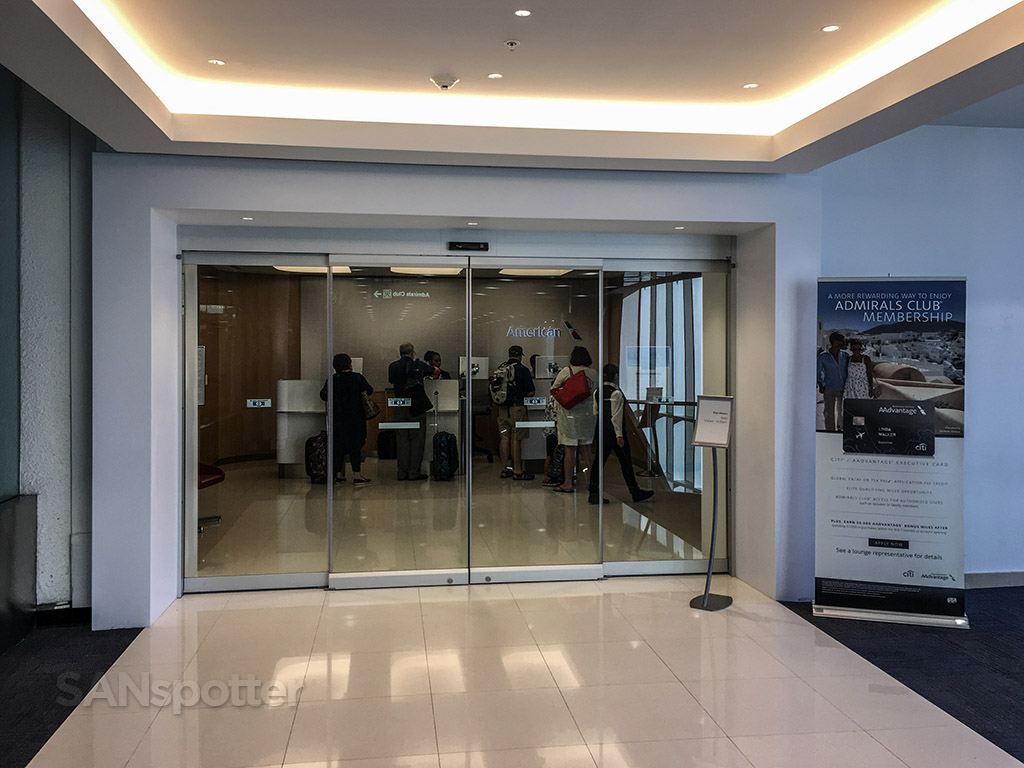 The main entrance to the American Airlines Admirals Club here at MIA (up one level from the departure gates).

Before going in, I was kind of expecting this lounge to be on the higher-end side of things. This is, after all, American Airline’s premier US hub, so it would seem as if this would be the place that they would want to offer their best lounge experience. At least it made sense to me.

I was not disappointed. While while this Admirals Club did not even come close to comparing to other flagship lounges such as the Virgin Atlantic clubhouse at LHR (not that I was expecting it to), it was certainly on par with other nice lounges such as the Delta sky club at JFK. Right away this place gave me a very good vibe – it was clean, bright, and most importantly…quiet (at least it was when I arrived). The decor is consistent with other Admirals Club’s that I’ve experienced at ORD at SFO, but it appears as if this one at MIA had been updated recently – everything felt new and squeaky clean. 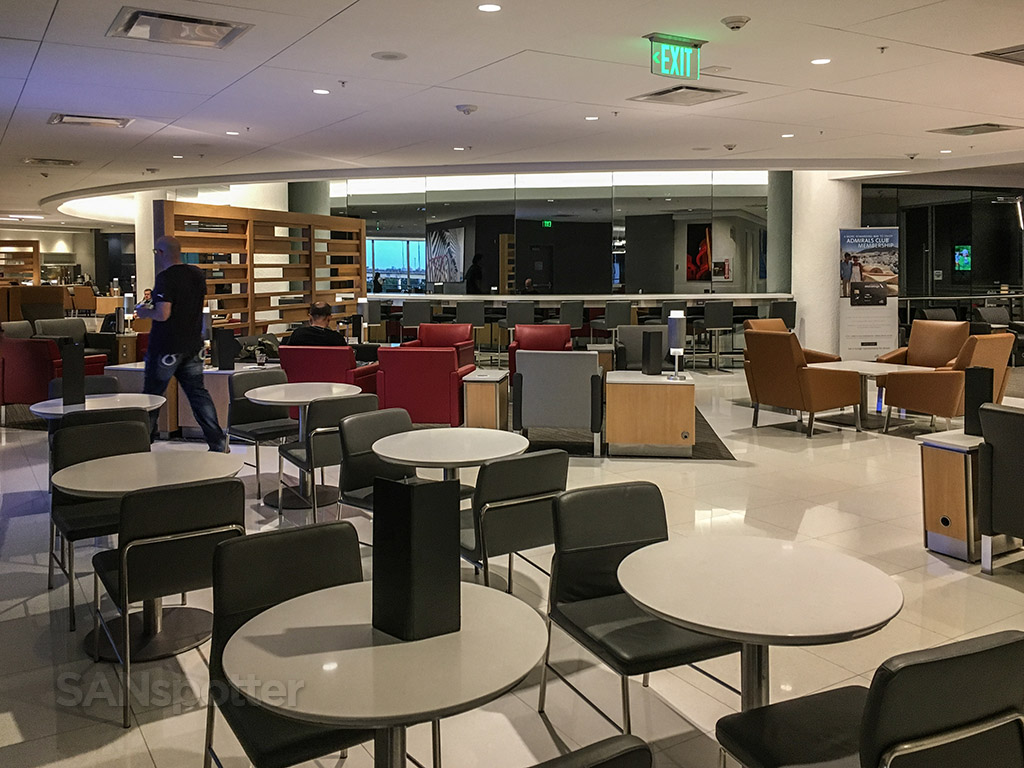 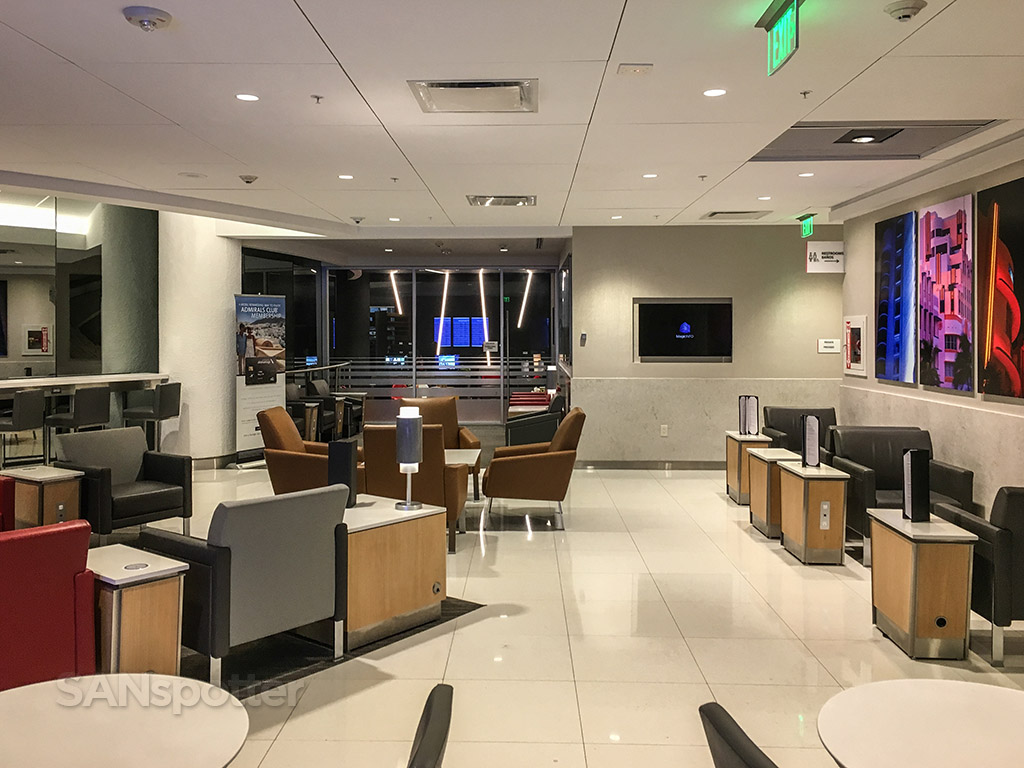 You won’t have a hard time finding a place to sit in here. Seating options galore. 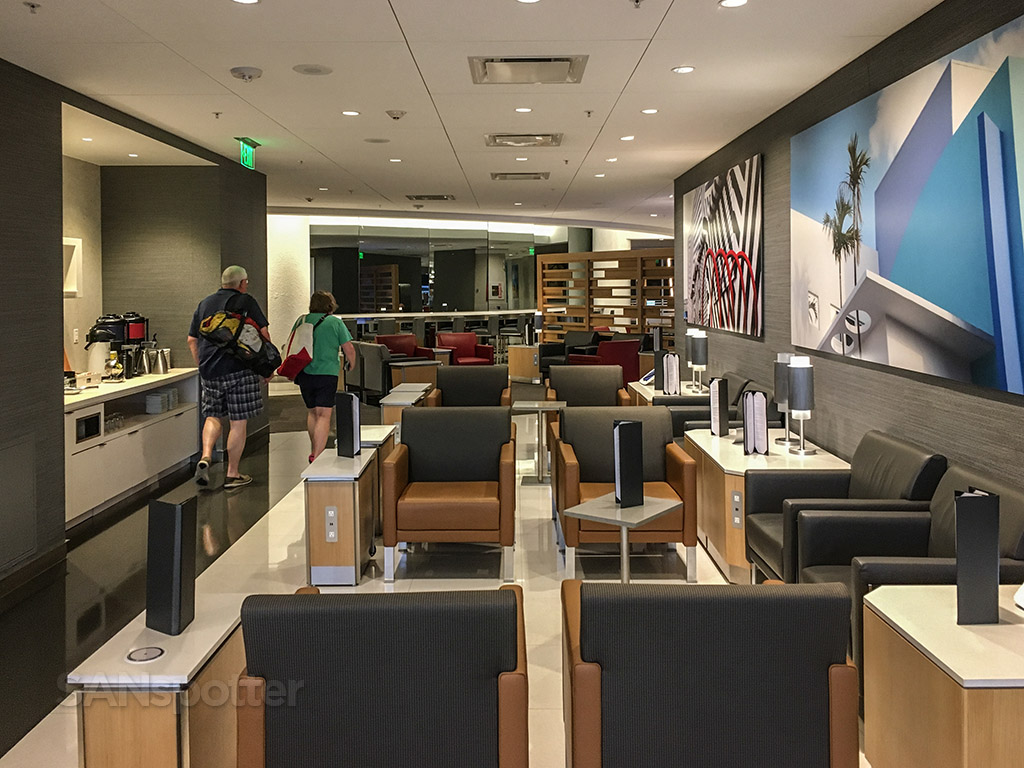 Everything looked super-clean and brand new. I couldn’t detect any “new car smell” though. 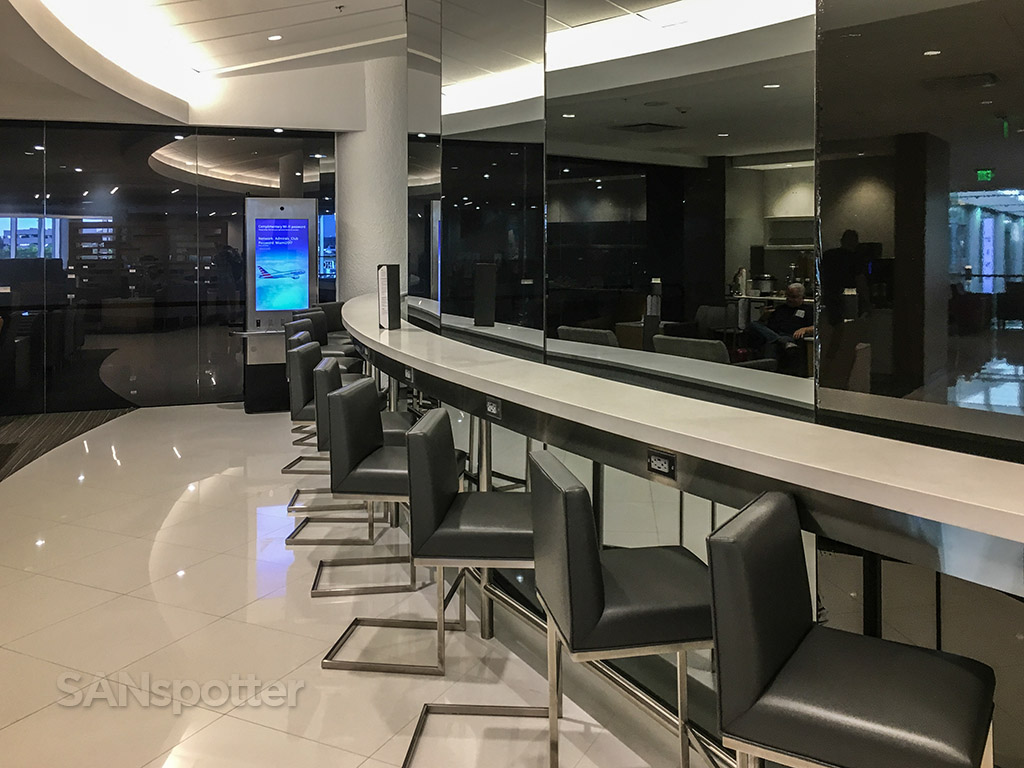 Varied seating options are always a good thing. This bar-like setting would be a great place to bang out a trip report I reckon. 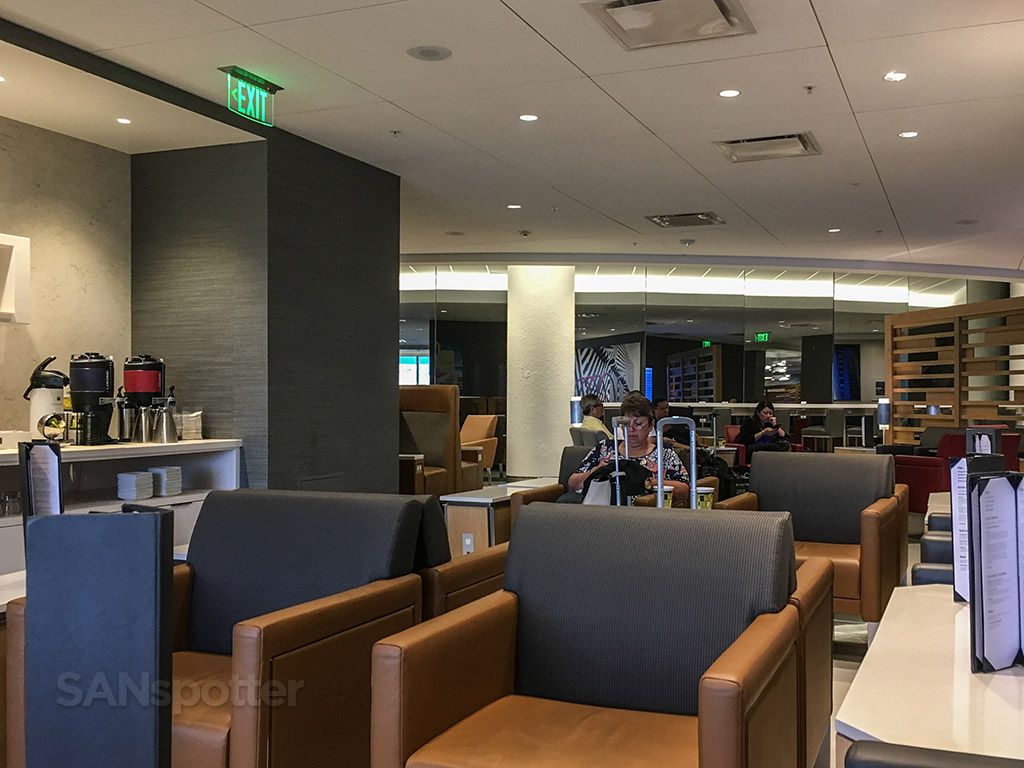 I wouldn’t go as far as to call the decor unique though – from certain angles I could have sworn that I was in the ORD Admirals Club. 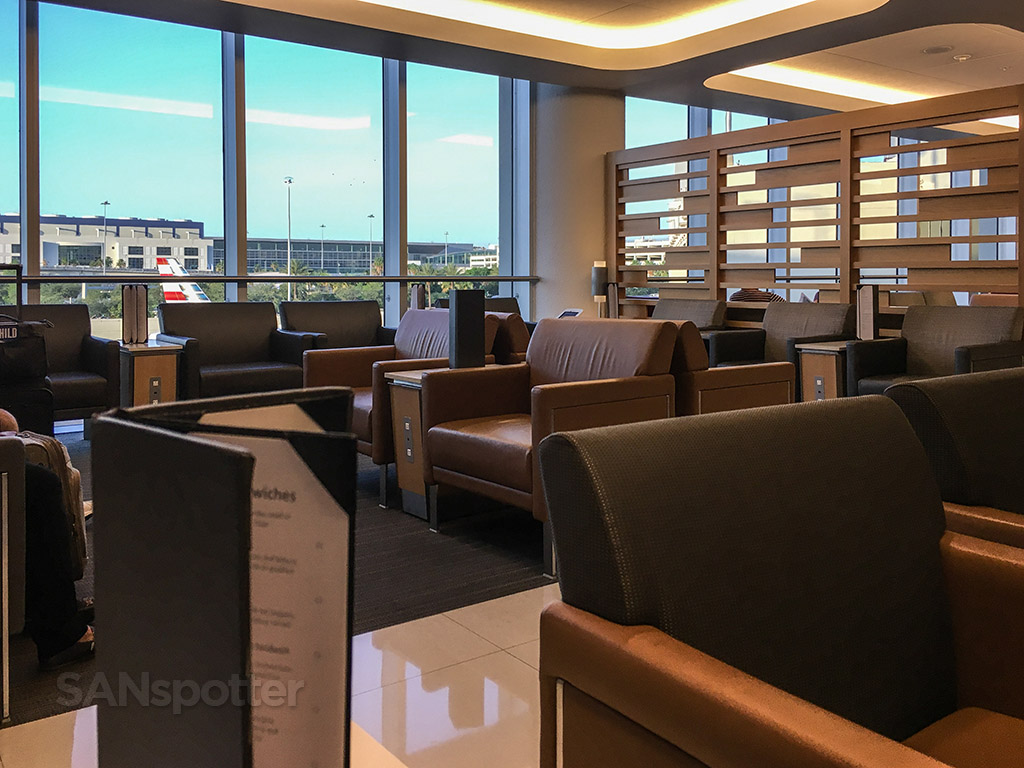 Only one side of this lounge has windows, but I still found it to be very bright with a good amount of natural light. 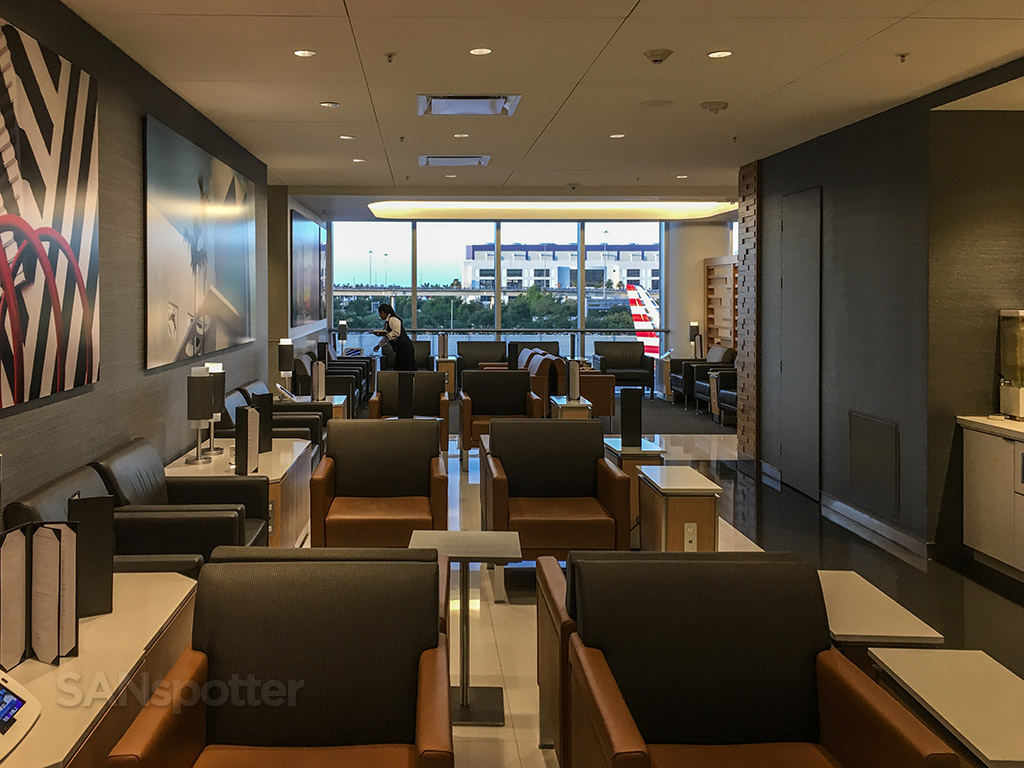 I was pretty lucky that it wasn’t so crowded when I first arrived. 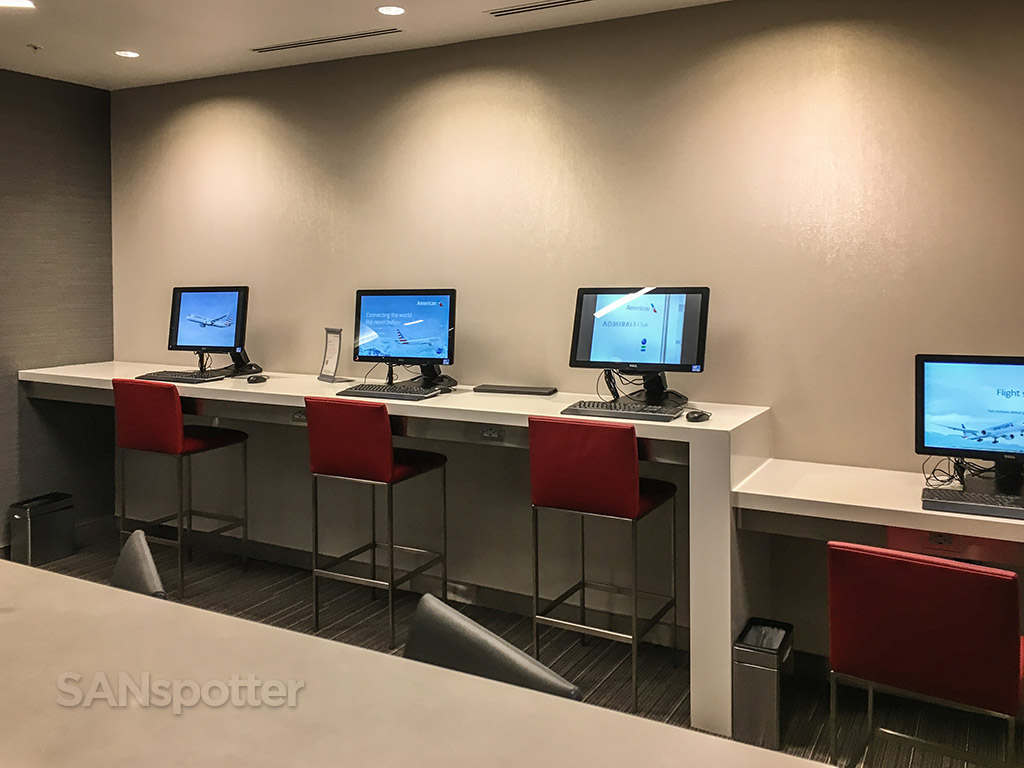 The business center. Not very private, but having access to desktop computers is a plus. 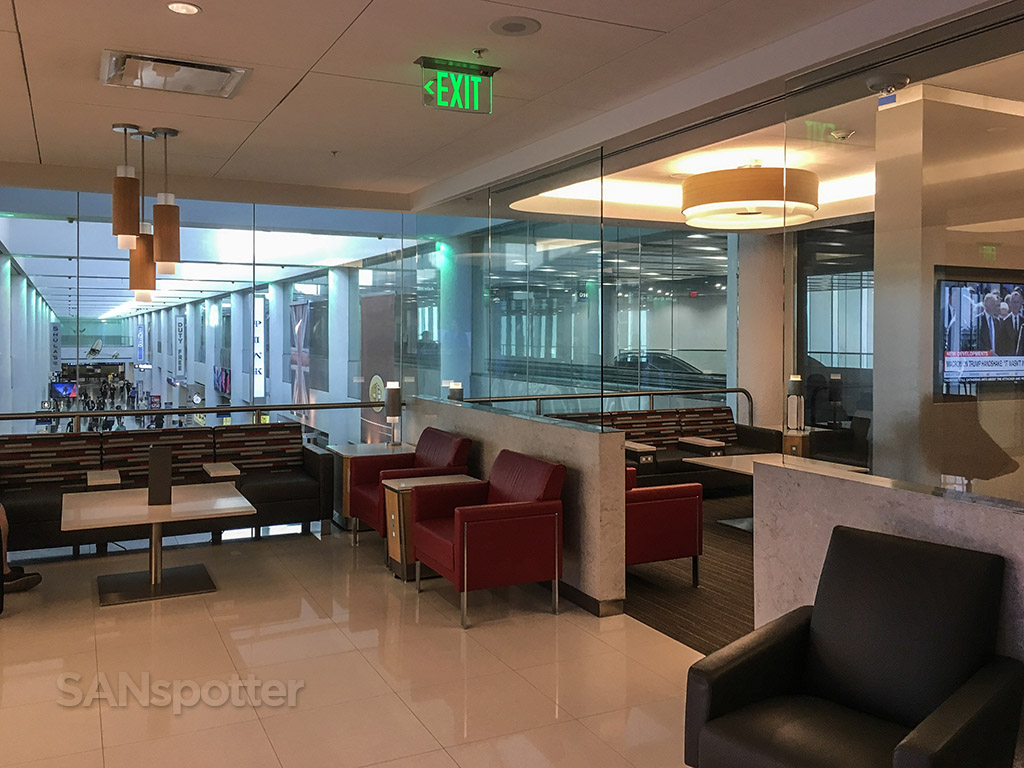 Nooks and crannies around every corner.

The food selection seemed decent as well, not any better or worse than other premier lounges that I’ve been to in the US. I wasn’t looking for 10-course breakfast to begin with, so that helped, but I was more than happy with my cup of steaming hot oatmeal accompanied by a banana and a glass of orange juice to wash it all down. 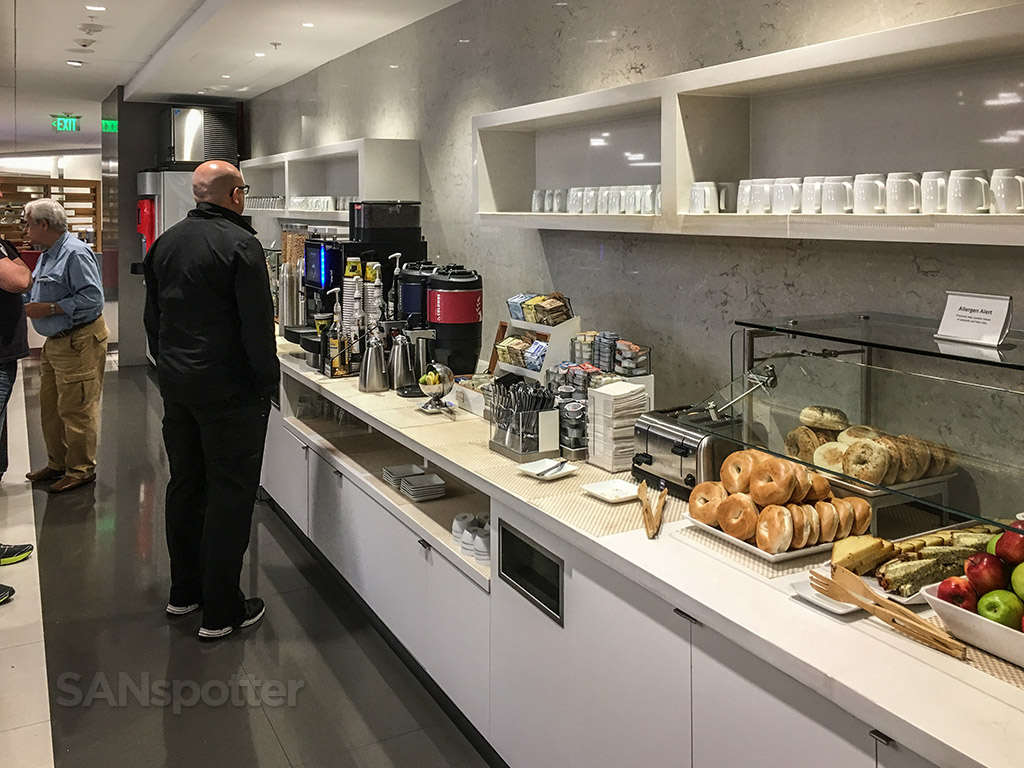 Did somebody say “breakfast”? The food spread here in this lounge was typical of other domestic US lounges. 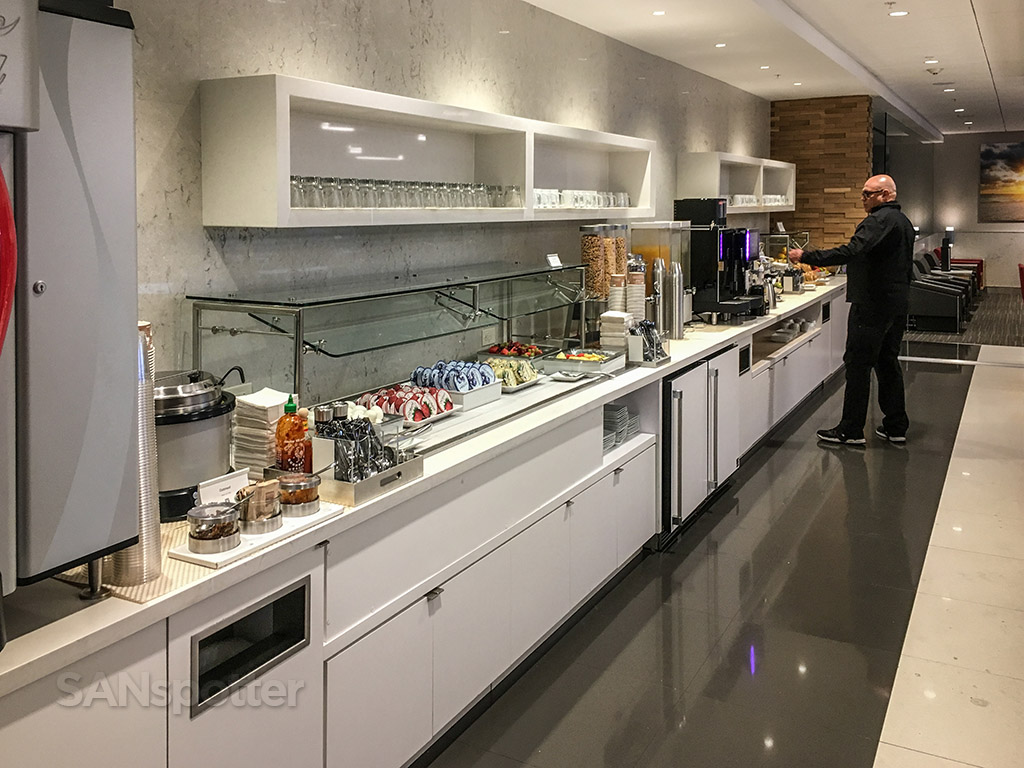 Hot oatmeal and yogurt on this end, with breads and pastries on the other. 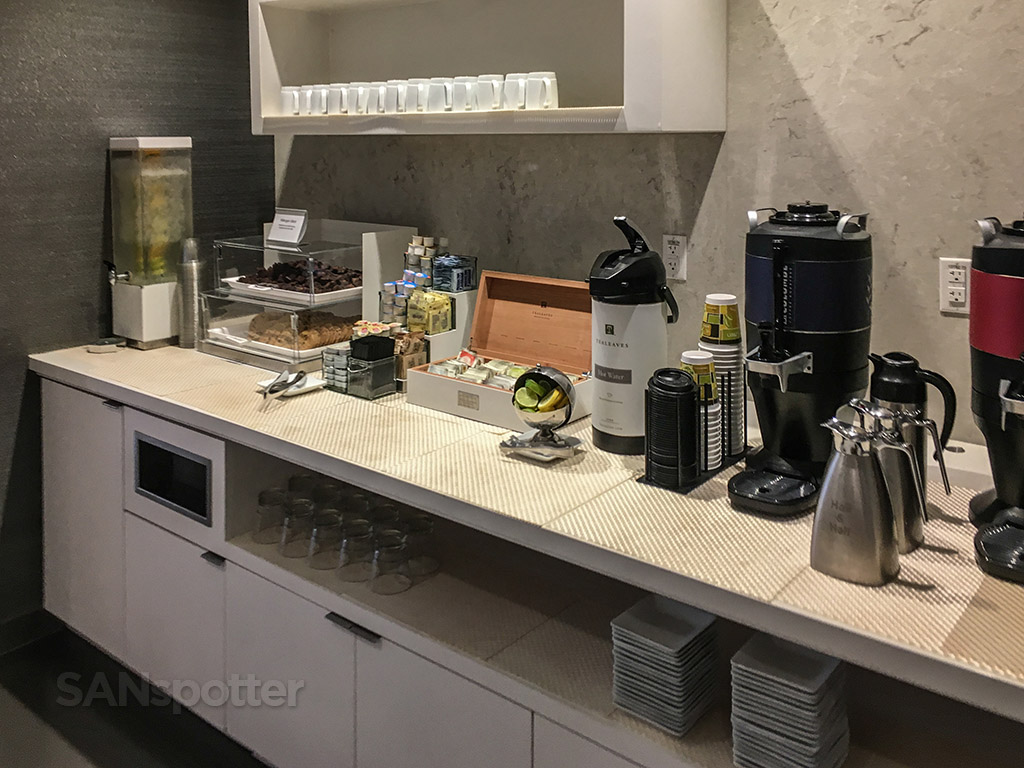 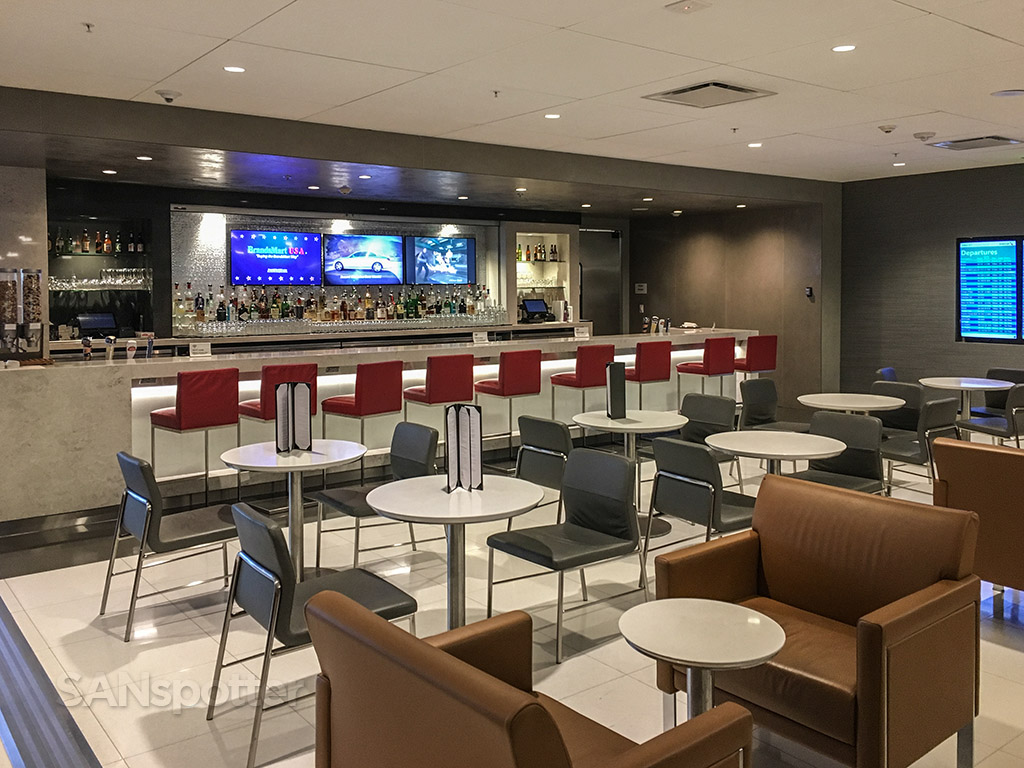 The bar. Not so active at 7am. 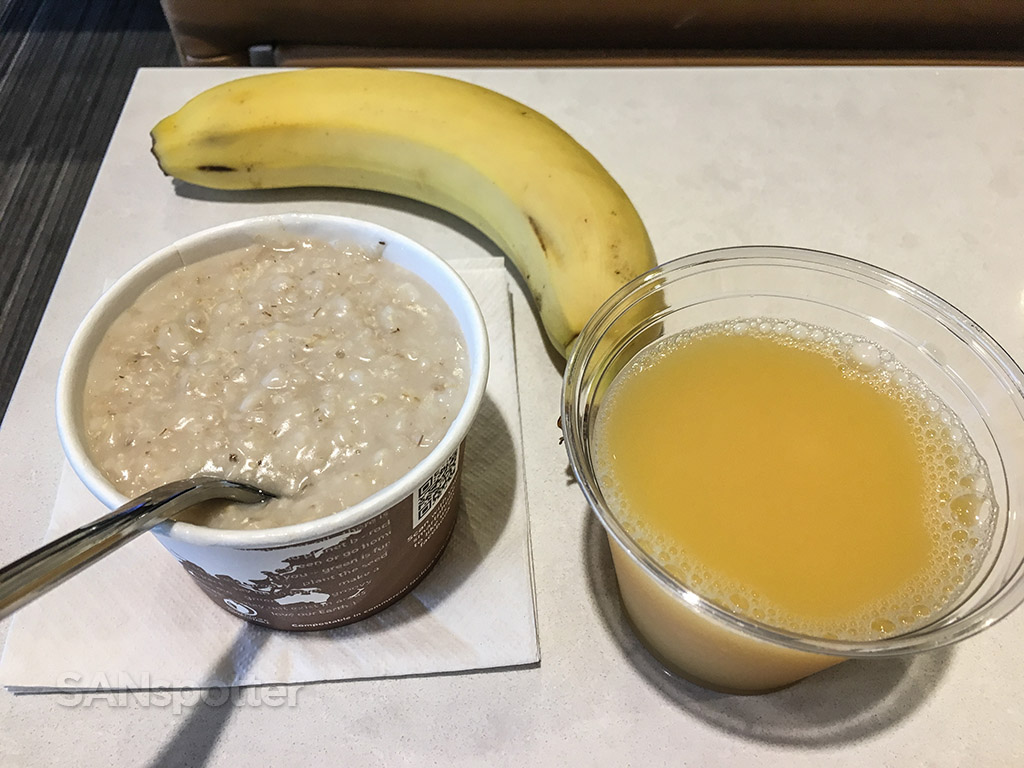 My breakfast this morning. Eating healthy while on the road isn’t easy but I try my best! 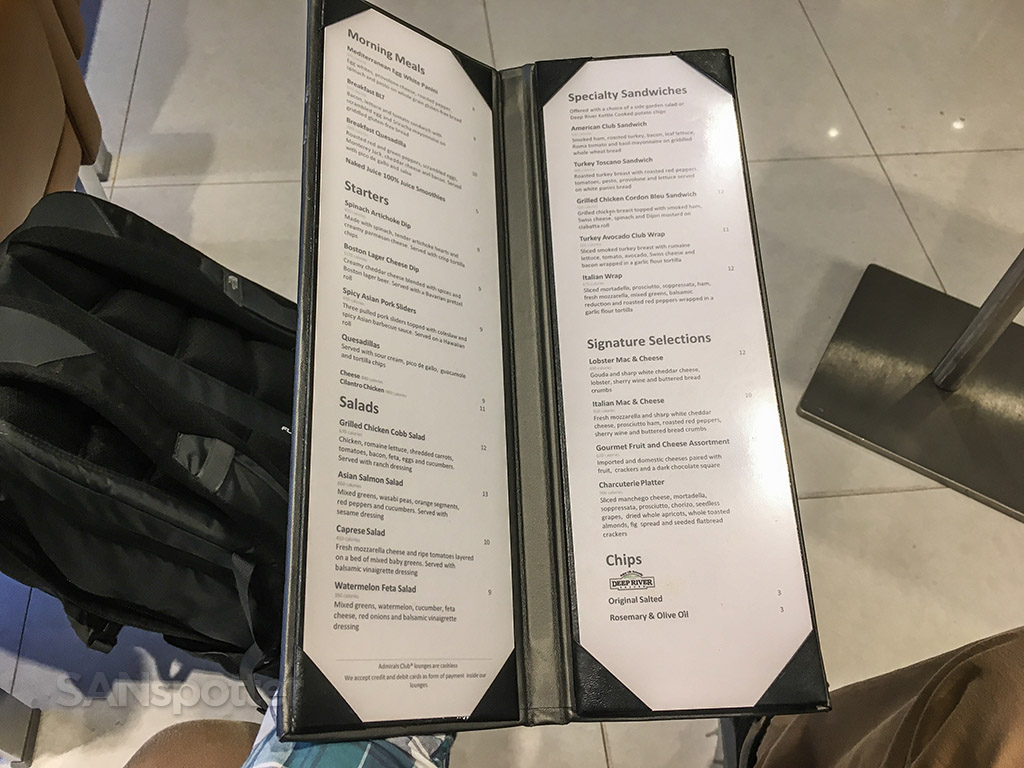 There is also a full menu of more heartier options – which isn’t free by the way. 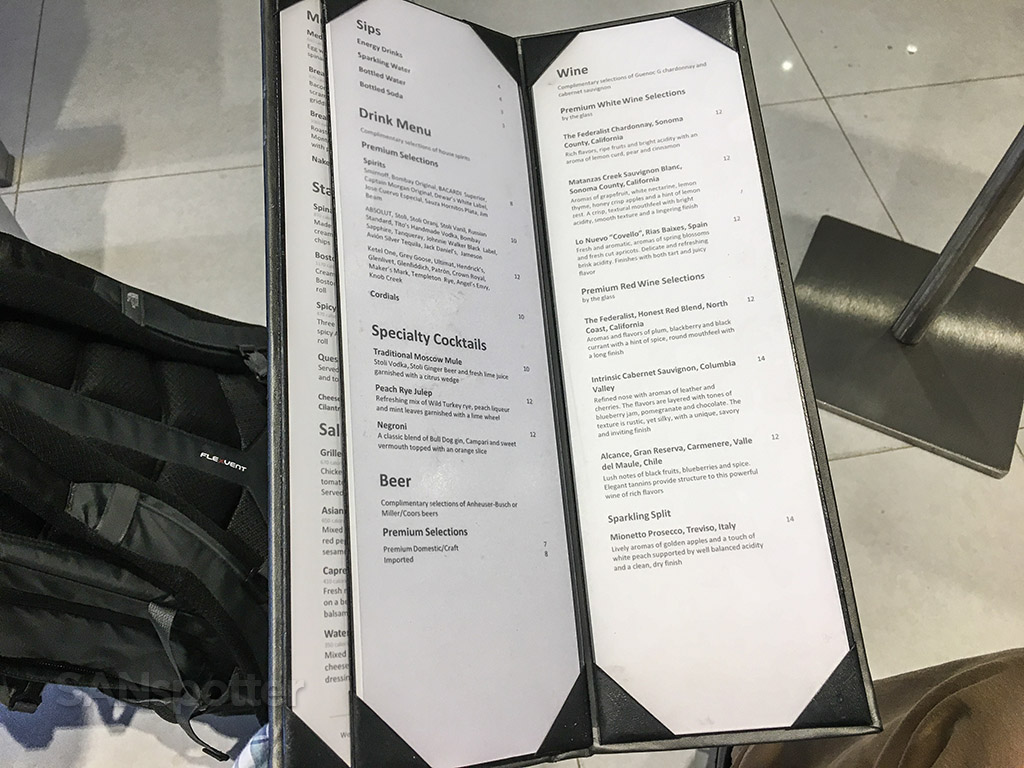 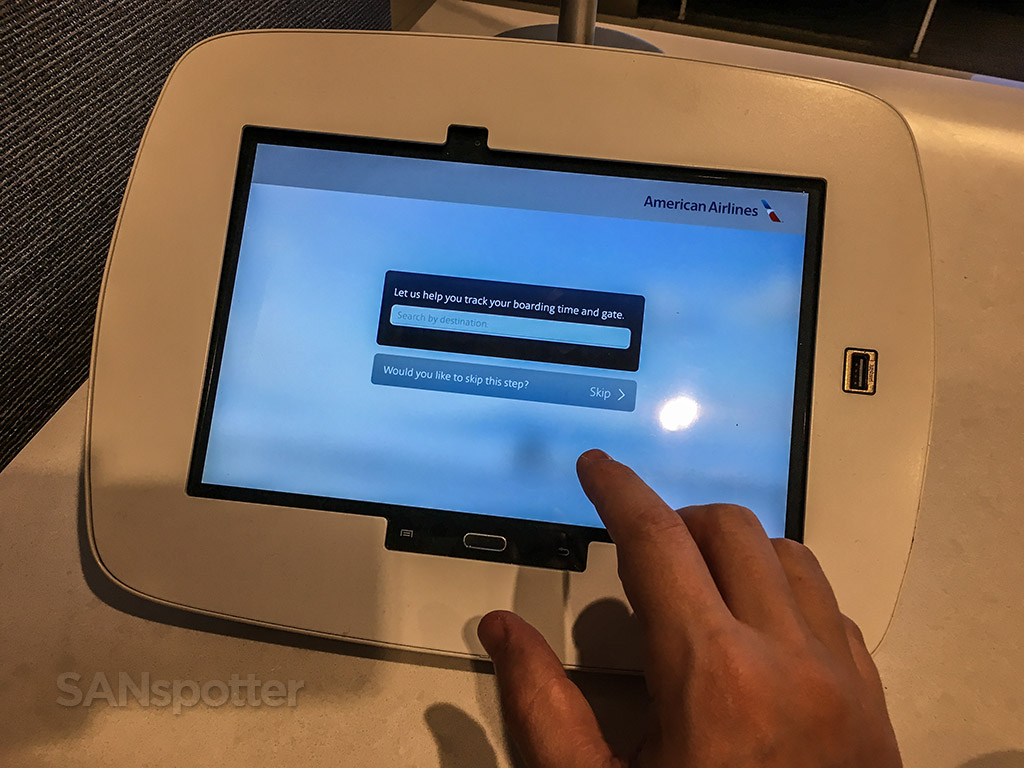 There were also these handy Android-based tablets everywhere, totally free to use. 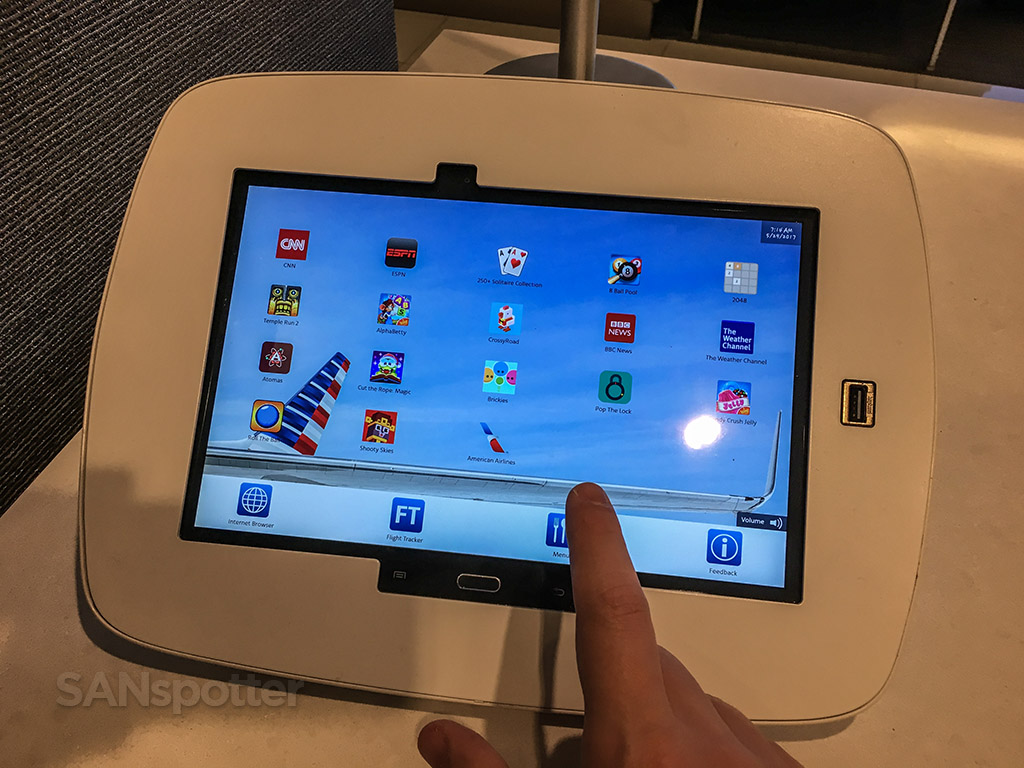 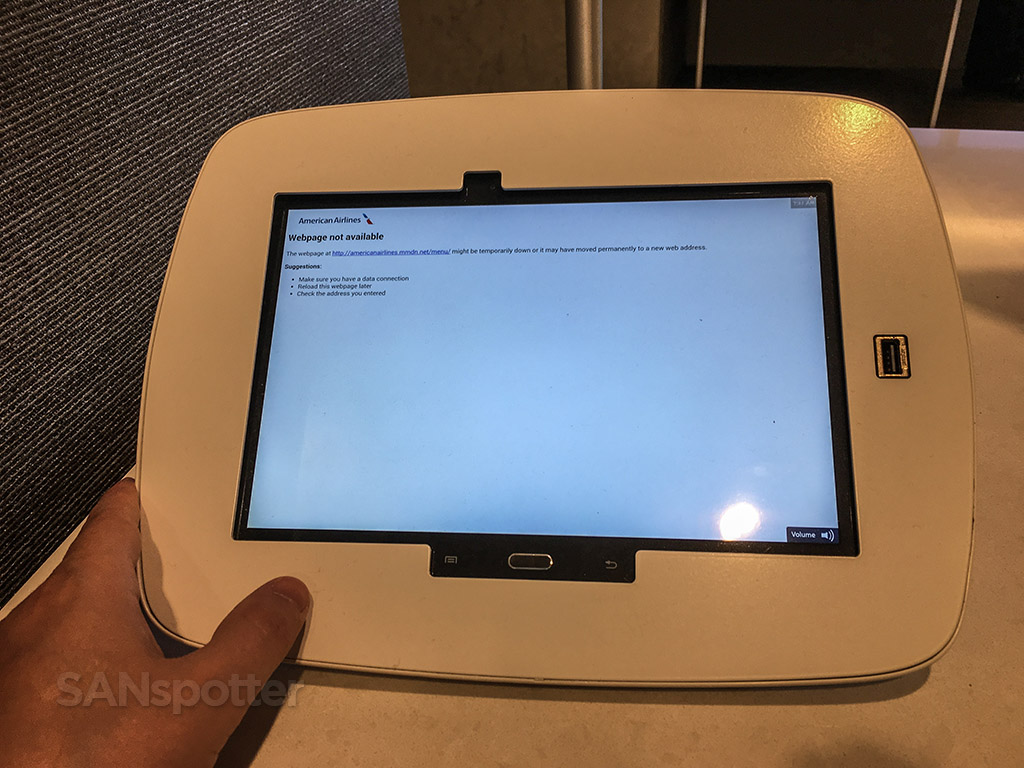 Unfortunately the system wasn’t working properly this morning and this is what happened whenever I clicked on anything.

And you know what? The plane spotting opportunities here in this lounge are some of the best at MIA. There are no double windows to shoot through, and the views of the gates below are high and commanding – much better than what you would see in the main terminal. 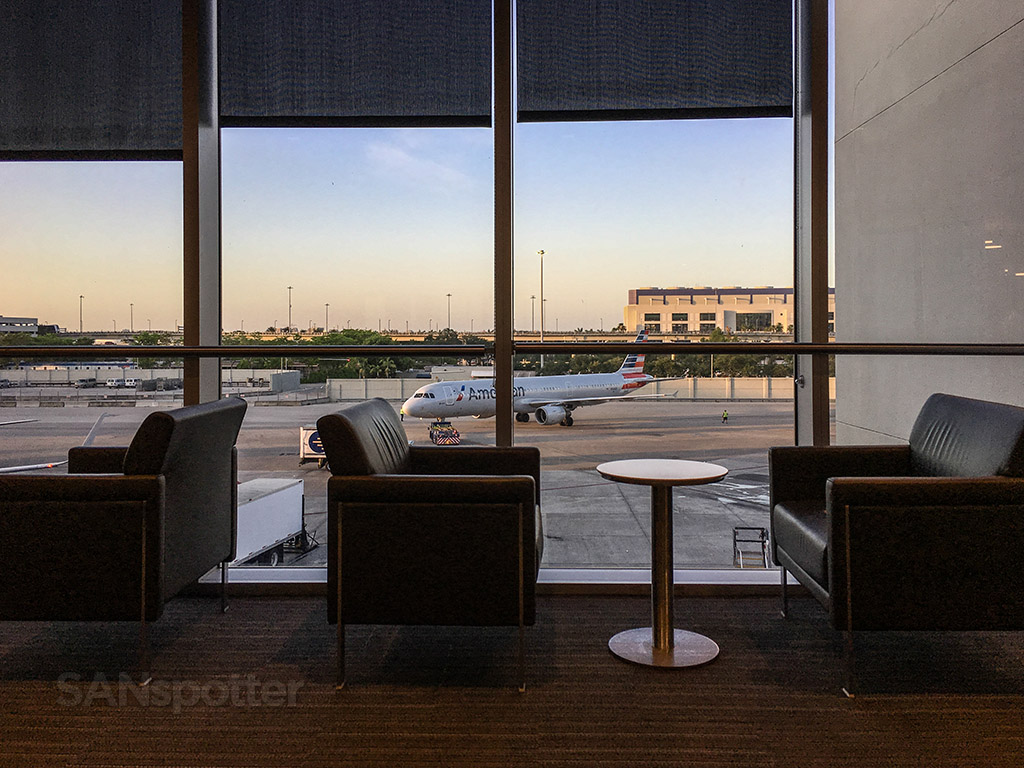 Big windows with excellent views of the action outside! 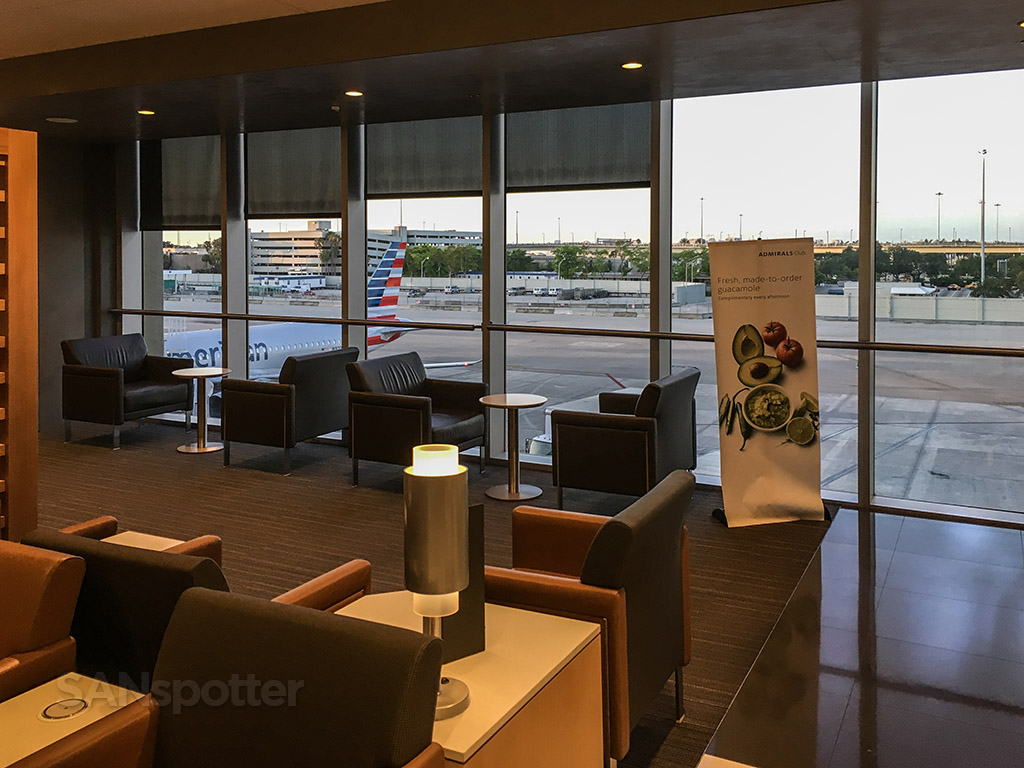 Unfortunately there weren’t any electrical outlets near the windows, so I had to sit way over here while waiting for my phone to charge. 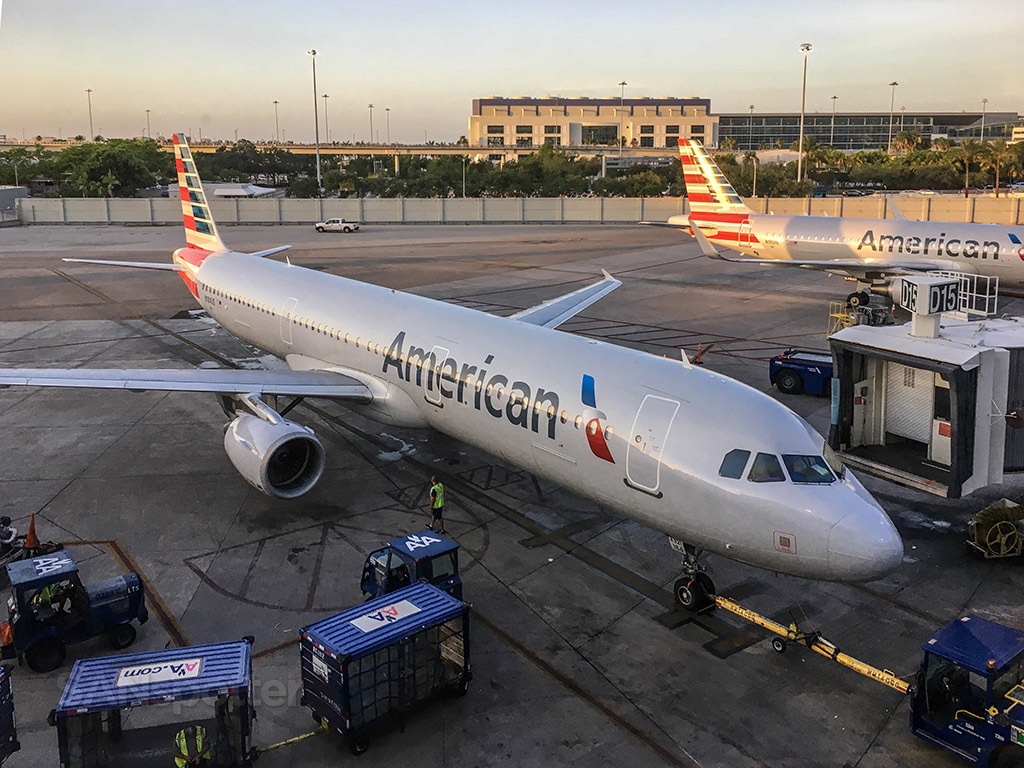 The spotting opportunities from this club are very good – if you like looking at American Airlines A320’s and 737’s I guess.

If I had one criticism of this Admirals Club, it would be the crowds. I arrived at about 7 AM and it was actually nice and quiet. Unfortunately I had to leave at about 7:40 due to the inability to concentrate with the flurry of other travelers all around. It wasn’t the noisiest lounge I’ve ever experienced, but there was a lot of activity and the only way I could seek refuge from that was going back out to the main terminal below. 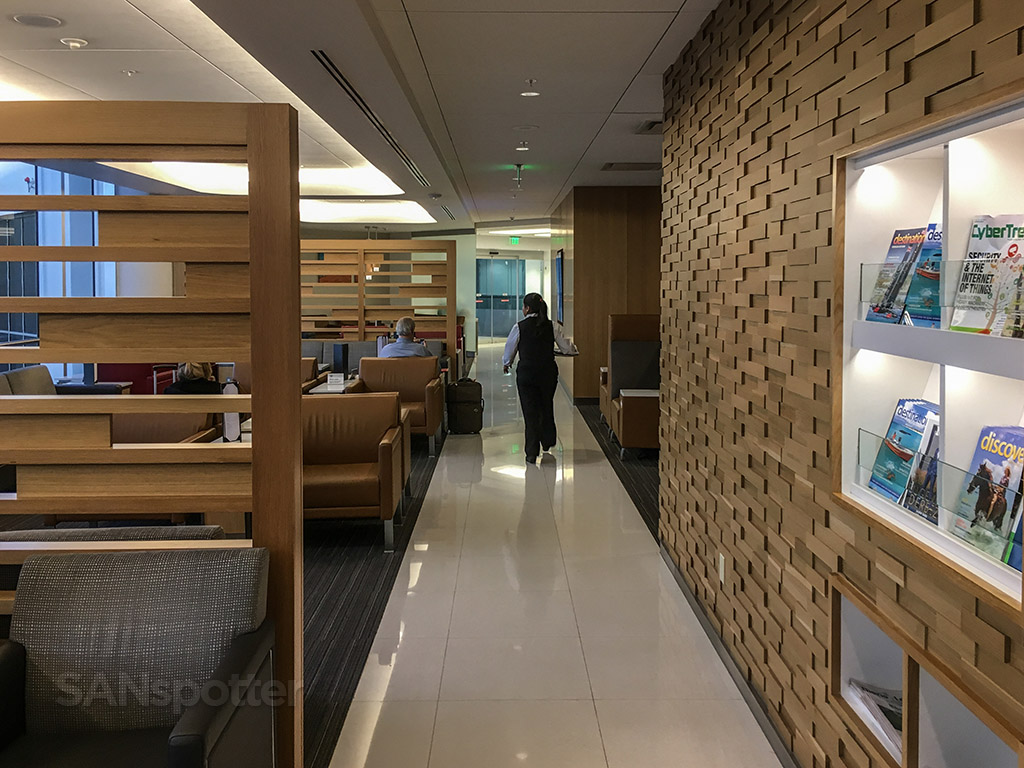 Time to leave – its getting too noisy in here.

If your timing is right, this is an excellent place to kill some time before a flight. Time it incorrectly though, and you going to have a hard time feeling relaxed any more than you could compared to being out with the masses in the main terminal.