British Airways flying in and out of little ‘ol San Diego has been a long time fascination of mine. I first moved to southern California in 1997, and back then, BA was serving SAN with a daily DC10 to LGW via PHX. It was pretty cool – but no doubt not the most ideal situation due to the fact that PHX was the intermediate stop both ways and all passengers on the inbound flight had to deplane and clear US customs there. It was also a bit inconvenient in the sense that this flight was LGW-based instead of the more popular (and convenient to most) LHR. Still, San Diego had a direct link to Europe on a global world-class airline, so nobody was complaining all that much. The flight did well – so well in fact, that it was upgagued to a 747-400 in 1999. 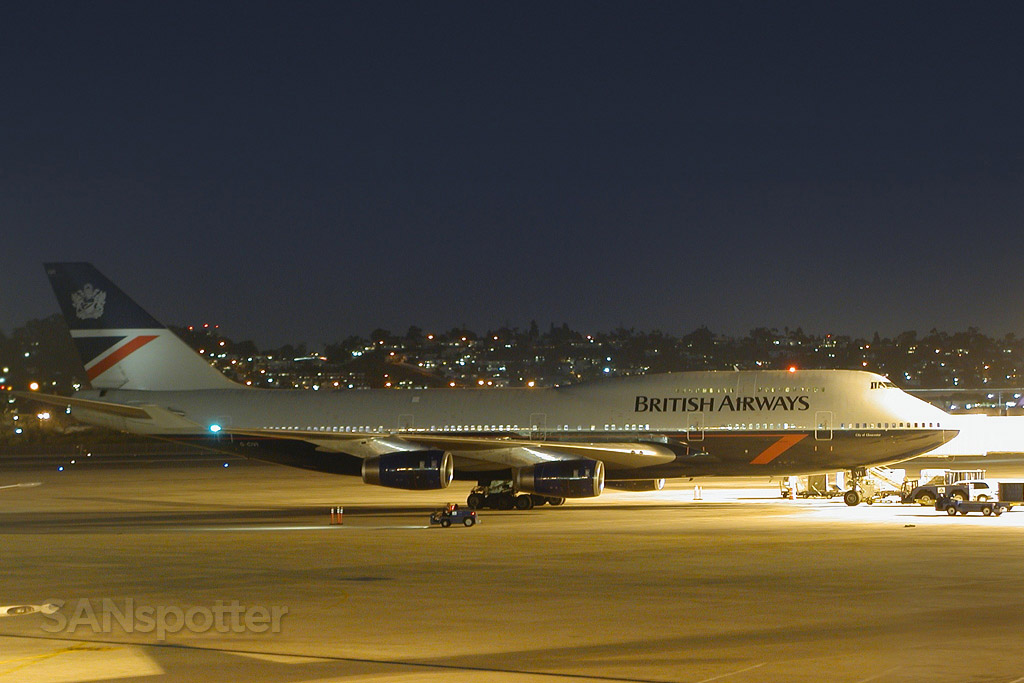 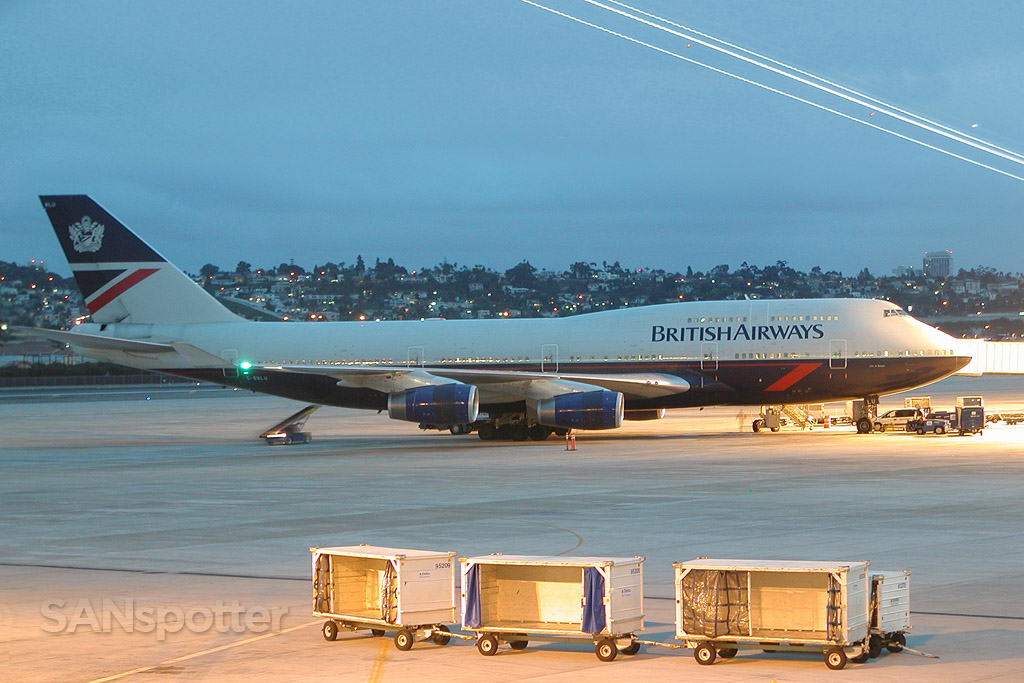 Unfortunately, the service was dropped altogether after 9/11 which led many of us local spotters and airline nerds to wonder when (or even if) British Airways would ever return to San Diego. Lucky, they did return in 2002 with nonstop daily service to LHR on the 777-200. It was so nice to see them back – especially with a nonstop service this time! That service has been running daily and uninterrupted since then, and I even had the chance to take the flight in 2013. It felt so weird flying internationally from SAN like that, but the flights (SAN-LHR and LHR-SAN) were great – especially since I was able to do the trip both ways in Club World (business class). 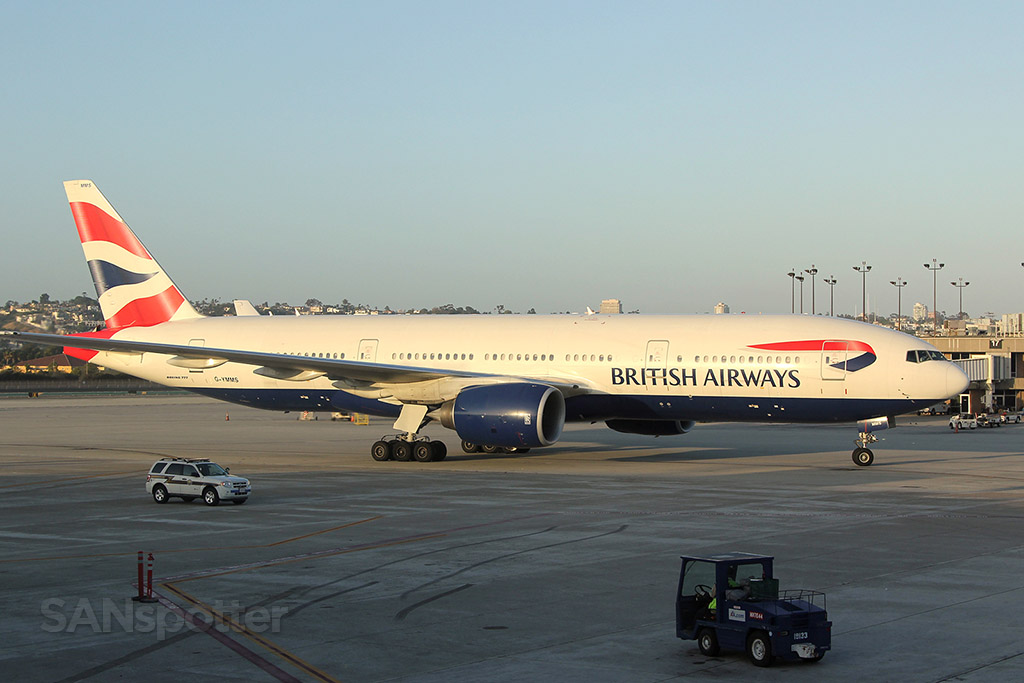 To make things even more interesting, British Airways upguaged their SAN flights back to the 747-400 earlier this year. This was really cool for several reasons: first, we haven’t seen regularly scheduled 747 service here at SAN since BA pulled out in 2001, and the return of this flight is seen by many (including me) as the one last “hurrah” of 747 service to San Diego. This is most likely the last time we will ever see the 747 here in passenger service, and that’s kind of a big deal – the end of an era if you will. Second, these are four-class aircraft, meaning that British Airways deemed SAN an important enough destination to warrant a first class service offering. That says a lot about the strength of demand they are seeing for these flights.

Realizing that this will likely be the last chance to get a ride on a 747 out of San Diego, it was a no-brainer to choose British Airways for this quick trip to England.

Before booking my itinerary (or even checking availability), I knew that my goal was to fly both the outbound and inbound on British Airways simply for the novelty of flying on the 747 in and out of SAN. Unfortunately, I couldn’t find award space in Club World for the return to SAN on the dates I needed – so I was only able to book the outbound SAN-LHR segment. If I wanted to fly business class both ways, the return would have to be on another airline (or two) which, initially, totally bummed me out. However, after digging around a bit I managed to put together an itinerary for the return home that more than made up for it.

As you can see, I managed to find some interesting flights for the trip back to SAN. Virgin Atlantic has been at the top of my airline bucket list for as long as I can remember, and that desire had only become stronger after my recent trip to PDX and back on Virgin America. Finally! I finally get to try Virgin Atlantic business class! Also exciting is the fact that I chose jetBlue to get me the rest of the way home from JFK, even though I was unable to scrounge together enough credit card points to nab a seat in Mint (their premium business class product). In the end, I decided to spend the money out of my own pocket for the Mint experience. It wasn’t all that expensive anyway, and this is a product I’ve been wanting to review for quite some time now so I deemed it to be worth the cost.

So here we go! It’s been a while since I’ve reviewed some proper international business class cabins, so these trip reports should be a lot of fun. And getting the chance to compare the latest business class products from the two major British carriers should make things all the more interesting since the original intent of this trip report was to document British Airways only. A bit of variety always makes life (and airline reviews) more interesting!