It’s been a long time since I have been fortunate enough to get a ride on a brand new aircraft type within an airline, so this was a flight I was looking forward to quite a bit. Delta’s A321’s have just started being delivered (the first one came back in April), and they are new and unique enough to their fleet that they’ve been using them exclusively between ATL and MCO in order gain familiarity and work out all the bugs that are inevitable with a new type. Where Delta will operate these things next is anyone’s guess, but for now the only way to get a ride on one is to fly between Atlanta and Orlando.

My travel plans never seem to work out when it comes to having an opportunity to be one of the first to fly something new, but this time the stars aligned and I found myself needing to travel between these two city pairs as part of this overall itinerary. I even took some video along the way, and here’s what I managed to put together:

The written portion of this trip report (with tons of pics, as always) continues below:

Having experienced the process of flying into MCO a week earlier (and being so surprised at how chaotic of an airport it is), I did my best to get in “crazy and chaotic” mode as I made the walk from the rental car garage into the terminal. Travel always seems to go much smoother if you go into it expecting the worst, so I was doing what I could to set my expectations properly so that there wouldn’t be any surprises.

Luckily, once inside, I found the terminal to be much less crowded and chaotic today.

This is the main atrium just past the check in desks and right before going through security. As you can see, it doesn’t look so busy today!

I managed to pass through security in about 5 minutes, and from there I did my best to find some decently healthy food for lunch. The amount of kids (and their parents) wearing Mickey Mouse ears was a constant reminder that I was deeply inside Disney country here.

Once past security, it was necessary to take a tram over to the main terminal.

Views from the inter-terminal train were pretty good – though the airport wasn’t so busy at this time so there wasn’t much to see.

This was the spot I found to sit and enjoy a quick lunch before walking down to the gate.

Our route from MCO to ATL today: JAG5 DBN ONYON1

My flight to ATL today was leaving from all the way at the end of the terminal (gate 78).

About an hour before the scheduled departure time, I was starting to wonder if this flight was going to be delayed. The aircraft hadn’t even arrived yet, and the pessimistic side of me was thinking that there was no possible way that they could turn around a fully-loaded A321 in less than an hour. Once again expecting the worst, I put it out of my mind as the aircraft eventually rolled up to the gate from ATL with 40 minutes to spare. Could they possibly turn this thing around that fast? I was definitely looking forward to finding out!

Our aircraft (N303DN) pulling up to the gate.

While waiting at the gate to board the flight, I was poking around on the Delta mobile app and I noticed that they were marketing first class as “business class” for this flight. That’s the first time I’ve seen an airline label it business class for a domestic flight, and I wondered if it is unique to the A321’s or if it’s something they are going to roll out systemwide. The other possibility is that it was because this flight number (only the flight number, not the aircraft) was scheulded to continue on to Europe later that afternoon, and we all know that Delta doesn’t have an international first class product. Their international business class is pretty good though…

Much to my surprise, they managed to start the boarding process nearly right on time. Props to Delta for turning a large(ish) aircraft around so quickly!

An up-close look at this brand new A321 just before stepping onboard.

Once onboard, I found pretty much what I expected: a first class experience pretty much identical to what was on the 737-900/ER that I flew on last week, right down to the seats.

First class seats 5C and 5D in the last row of the first class cabin. Note the lack of a hard bulkhead wall separating first class from economy.

Waiting for everyone to get onboard so we can go on our way.

The only major difference between the 737-900/ER first class cabin and this A321 that I took notice of was Delta Studio (the in flight entertainment system). Touch screen performance was phenomenal, and the entire UI seemed richer and more polished – especially the moving map. I quite liked it, though I found it odd that each aircraft I had been on for this itinerary (three so far) had a different version of Delta Studio. Hopefully Delta is working hard to unify the fleet in this regard, because these differences are significant enough to make for an inconsistent in-flight experience IMHO.

The newest version of Delta Studio on the A321 is nice – very polished and clean.

They even include the ship number (the N-number no less) on the aircraft information screen. How cool is that?? Thanks Delta!

Delta should have asked me (@Norebbo) to do their aircraft illustrations for Delta Studio – I would have loved to work with them on this!

The only other thing worth noting from the boarding process is that I was so excited to be on this brand new A321 that I accidentally sat down in 5D instead of 5A (my reserved seat). The guy who had 5D had no problem with taking 5A instead, so it all worked out in the end. What is it with me sitting in the wrong seats? You may recall that I did the same thing in April when boarding the UA 747-400 in SFO.

Push back from the gate was just a few minutes late, but we were put into a hold once out on the taxiway due to flow control into ATL. It ended up being a 15 minute wait before we could take off, but at least the pilots kept us informed and in the loop. On a side note, this aircraft was so new that the wifi system had not been installed yet, and the flight attendants apologized multiple times for that – especially since we were stuck on the ground with nothing to do.

Sitting and waiting for our turn to depart.

Finally on our way! With the high summer sun directly overhead, conditions were not ideal for photography unfortunately.

Climbing away from MCO

So long Florida! See you again in December…

Flying time up to ATL was about an hour, and the inflight service was about as good as could be expected for such a short flight. They brought around the snack basket several times, and kept drink glasses filled as best they could. In my opinion, labeling this service as “business class” is the right thing to do. First class service it was not, so my hope is that Delta and the other domestic US airlines would consider making a permanent switch to the more appropriate name. Though I could see this being a problem if some airlines don’t follow suit.

The weather was pretty much clear and bump-free all the way to ATL thankfully.

Unfortunately the high sun made in-flight photography difficult and I ended up having to close the window shade in defeat.

Starting the descent into Atlanta.

Compared to the 737-900/ER, the interior panels of this A321 seem a bit less stylish. The Boeing Sky Interior is much more soothing IMHO.

Making some twists and turns as we approach ATL. 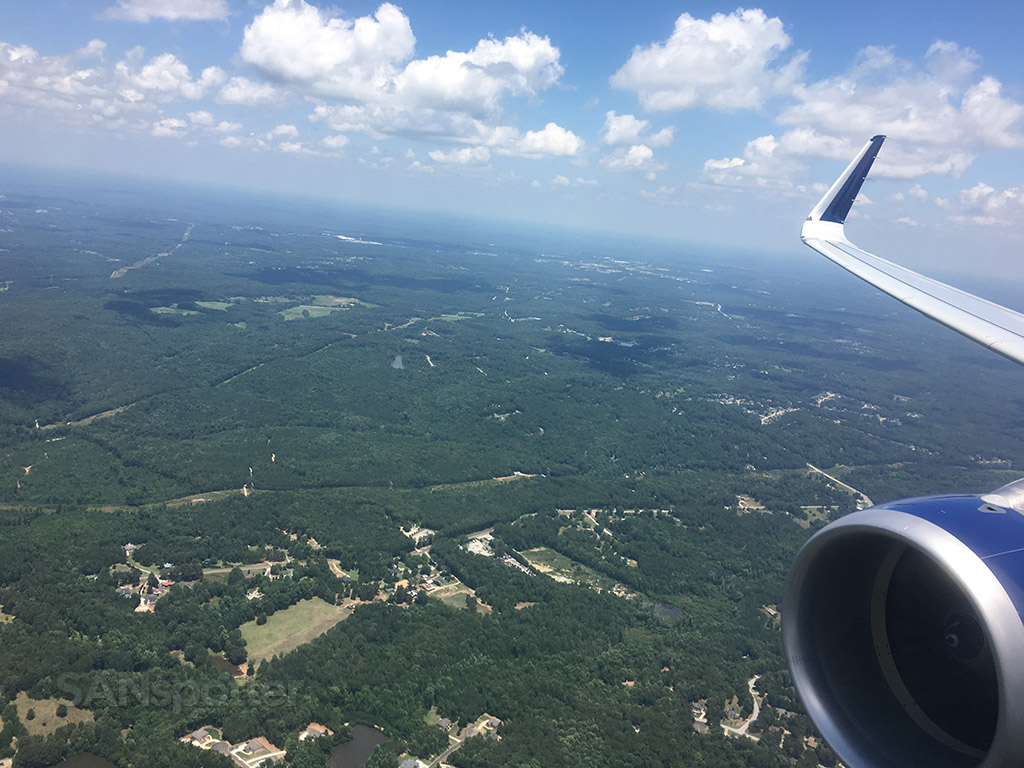 It was a fine approach into ATL today, as those of us on the right side of the aircraft had a pretty good view of a DL 767-300 flying parallel to us as it made a simultaneous approach to the northern side of the airport. Having my DSLR with a 400mm lens would have been great to get some nice pics, but – I never travel with camera gear like that (too heavy!) so I tried my best taking pics with my iPhone and failed miserably. Oh well. 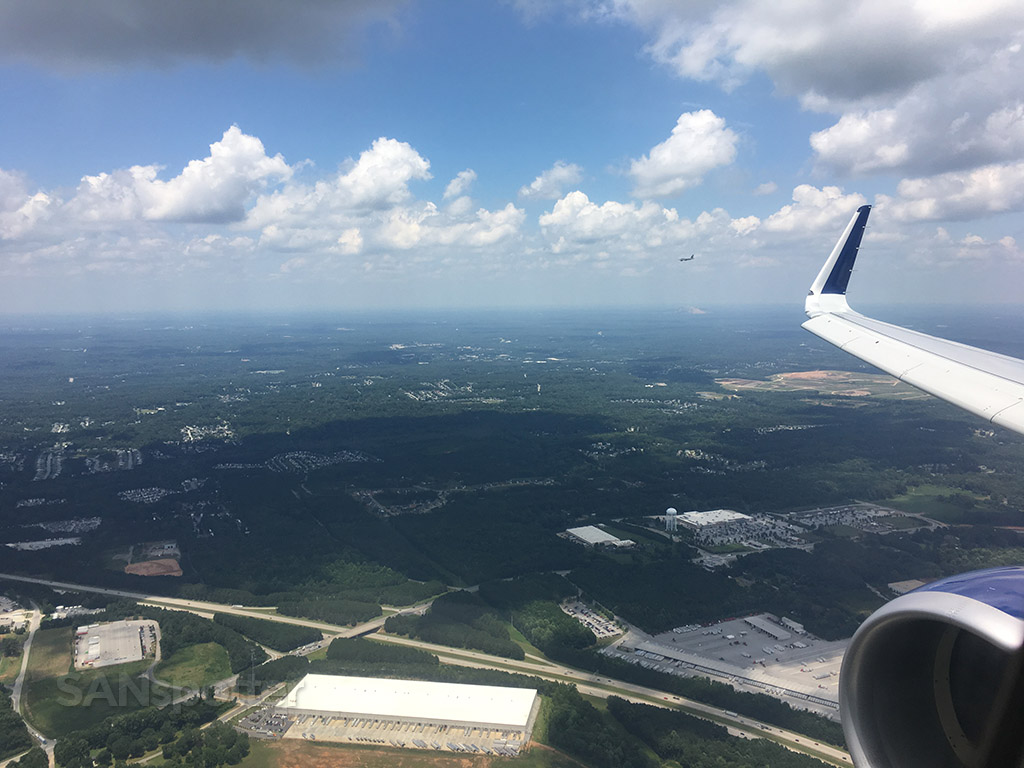 It’s difficult to see, but that aircraft in the distance is a Delta 767-300 making a parallel approach. 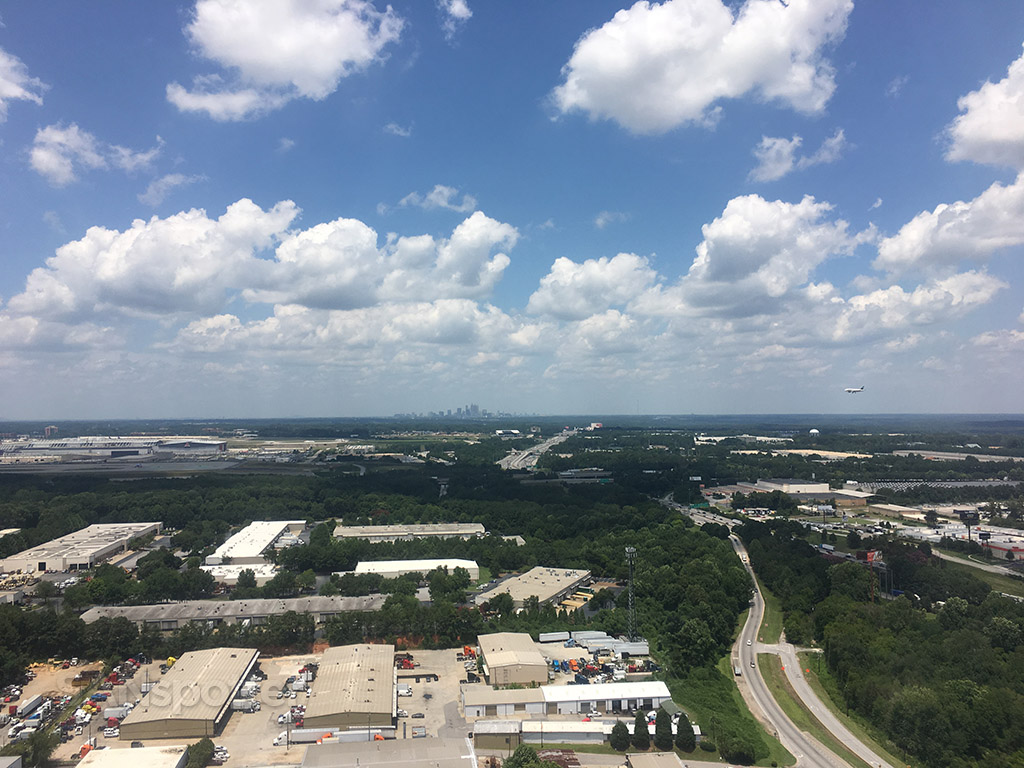 The Atlanta city skyline and a 767-300 making a parallel approach off in the distance. What a view! 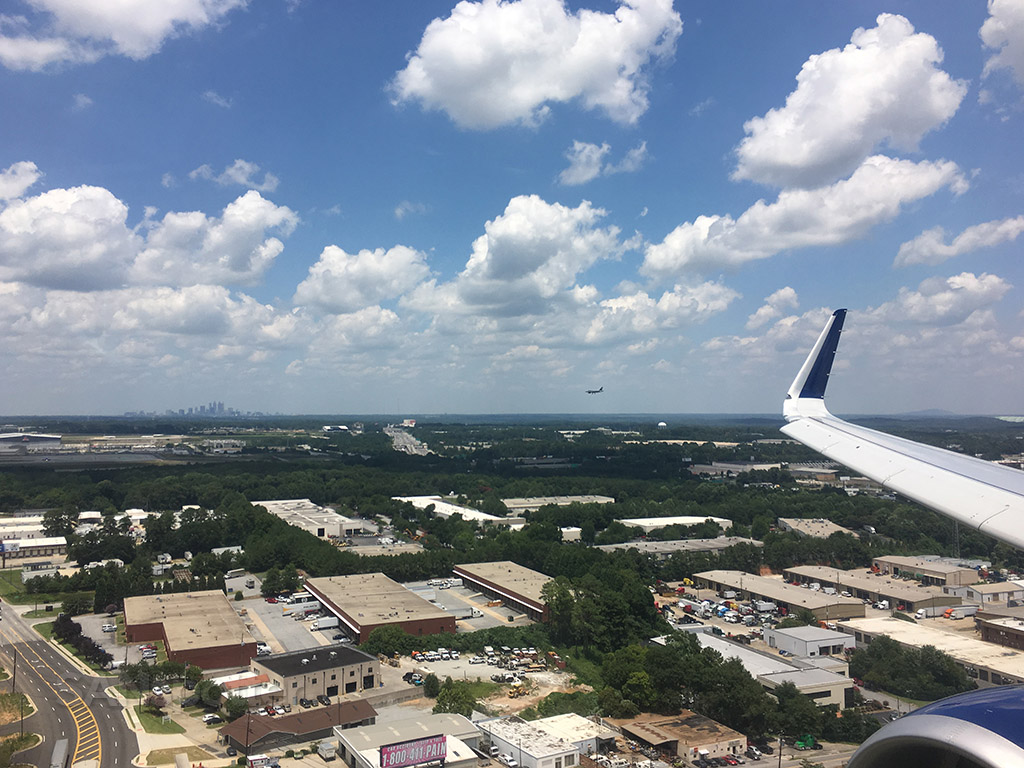 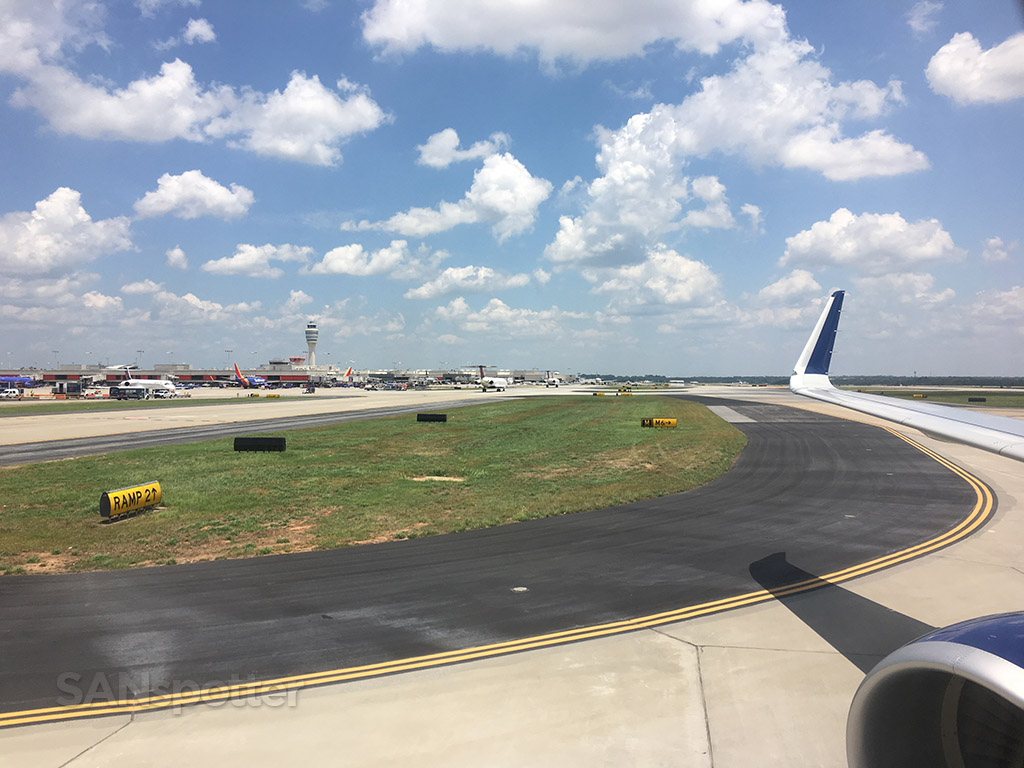 “It is our pleasure to be the first to welcome you to Atlanta, where the local time is…” 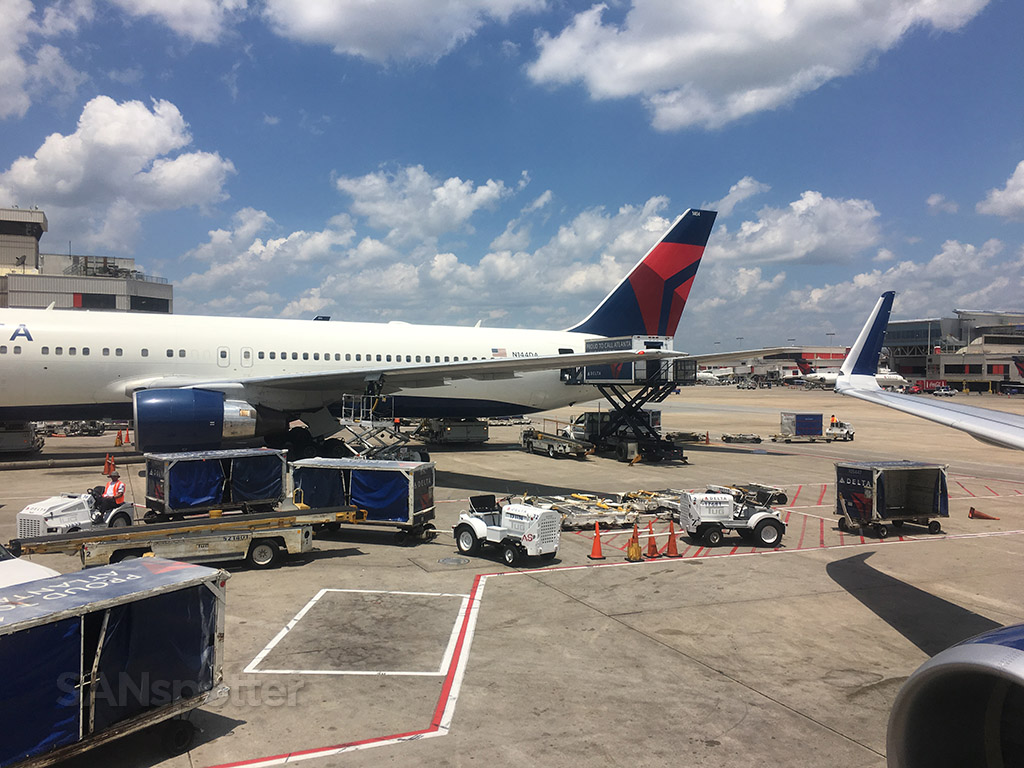 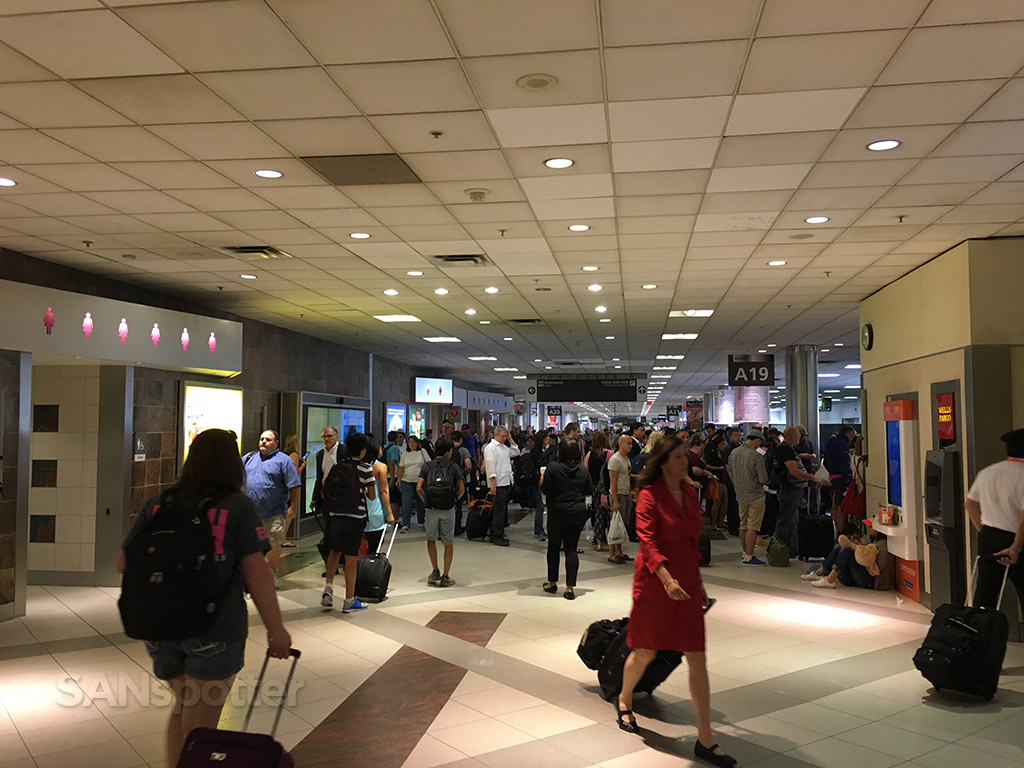 Unmistakably ATL. Good to be back At Hartsfield Jackson International Airport.

At least it was a beautiful day in Atlanta and my connecting flight home to SAN was showing as on time. Only one more flight to go for this trip report!