The final segment of an exhausting itinerary is always the worst. I’m usually all kinds of tired and cranky by that point, and there’s not enough airline and travel nerd in me to feel excited about boarding a regional jet for the final leg home – even if I am holding a first class ticket.

To make things even worse, the boarding gate for the flight down to SAN this evening was at the end of terminal 6 – which is basically one giant construction zone at the moment with nowhere to sit and relax. It’s standing room only unless you want to sit on the floor in the middle of everything! I was tired enough to choose that option, and I certainly wasn’t alone this evening. Since I was coming from the Sky Club in terminal 5, it meant making another trek through the underground tunnel back to terminal 6 Making my way to the end of terminal 6. It doesn’t look so bad in this pic, but there is a lot of construction here at the moment Gate 69B: the departure point for the flight down to SAN this evening. Doesn’t look so crowded in here…yet. It seemed everyone arrived at the gate at once, and ultimately there was no place to sit except for the floor. I can’t wait until LAX is fully renovated! 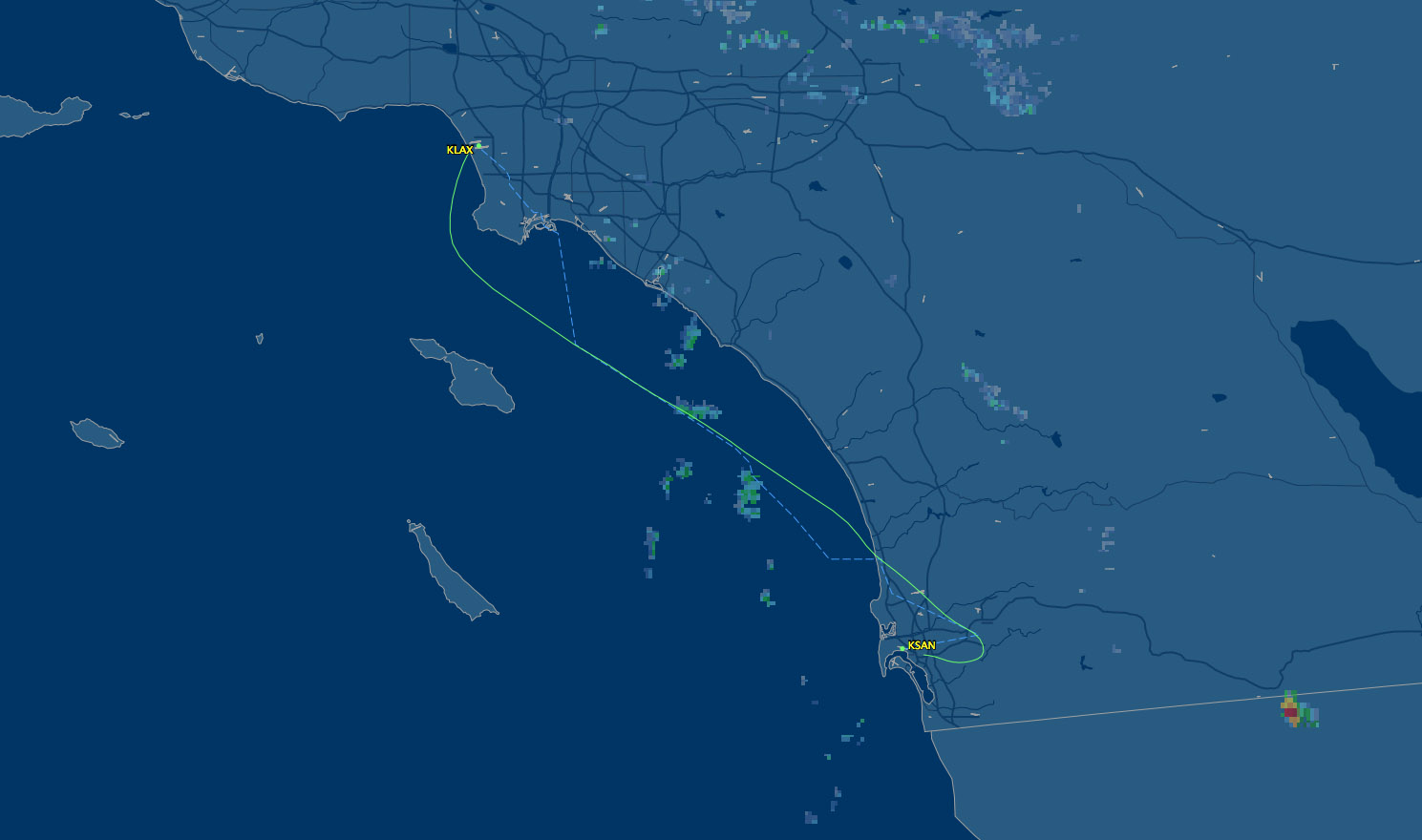 Our route down to SAN this evening: LAXN11

Despite my earlier worries about being delayed due to the rain and fog outside, they started the boarding process only a few minutes late and I was in my seat and ready to go in seconds. Let’s go home already! Everyone occupied with their mobile devices

It turns out that the aircraft operating down to SAN tonight (N625CZ) had been around for a while. Unlike the brand new ERJ-175’s I recently experienced with American Eagle and United Express, this tired old bird was showing her age in not so pleasant ways. It was dirty and smelly airplane with smudged windows and stained walls, which highly degraded the first class experience. Well, perhaps I shouldn’t exaggerate so much. There isn’t much of a first class experience on an ERJ-175 to begin with (other than a slightly larger seat), so it really didn’t matter if I was back in economy or up here in 3A. The only place I really wanted to be at that moment was under the covers in my own bed. Sigh. This is the view from my window as we waited to push back from the gate. And if you’re wondering what was parked next to us, it wasn’t all that exciting.

Unfortunately, they (the pilots and ground crew) were having paperwork issues and that resulted in a 15 minute delay to get things sorted out. Considering the flight time from Los Angeles to San Diego is only 25 minutes, that was nearly 67% of the total time we were supposed to be onboard in the first place. How’s that for a delay? I’m not sure I’ve ever had one that was worse – at least percentage wise.

It was still pretty rainy and gloomy out there as we pushed back from the gate, and I killed some time trying to get some halfway decent pics of the action on the ground here at LAX. It wasn’t so easy due to the conditions, but I tried my best as any true airliner nerd would. It’s been a long time since I’ve been at LAX after 10pm, and I had forgotten how many long haul flights depart during this time. It was quite active here this evening! Making our way out to 25R Finally on our way! Here we are crossing over the beach just west of LAX.

Shortly after departure from 25R, the flight attendant came through the cabin offering snacks and beverages. Not many people took her up on it, but there were enough to keep her busy right up until we began the descent for SAN.

The weather didn’t look any better in San Diego than it did up in LA, but it mattered not. It was a great feeling to know that I was finally home and would be sleeping the comfort of my own bed in less than 45 minutes. The cherry on top was knowing that I was on Christmas vacation and that I didn’t have to go to work the next day! Descending into the fog over San Diego. On a side note, this pic was taken at what I estimate to be the point where we were directly over top of my house. Or close enough at least… Flying into San Diego at night is always beautiful – especially when the downtown buildings are decorated in Christmas lights! Another mission complete for N625CZ. Here she is taking quick break at gate 36 (terminal 2 west) just moments after I deplaned. And that wraps up my 2-day trip to New York and back. I definitely got my fill of premium travel over the past 48 hours, and I’d really like to do the same thing on jetBlue and Virgin America sometime soon just for the sake of comparison. But wouldn’t it be nice if there were some premium transcon products based out of SAN to try? Delta used to run their international-level Business Elite product between a handful of west coast cities and New York, and I’d love to see something like that out of San Diego. It sure would make these kinds of trips easier!