Transferring to a domestic US flight after spending over 10 hours in business class or better is never easy, and it’s even worse when the only seats left are back in the bowels of economy class. That’s exactly what I was facing after my 15 hour flight from Hong Kong, and the truth was that I just wanted to get this flight to SAN over with as fast as possible. However, I slept like a baby for nearly all of that 15 hour experience in BusinessFirst, so I was actually feeling pretty good right before jumping on this connecting flight to San Diego. I’ve certainly felt worse coming home from a long international trip.

After clearing customs and security, I had just under two hours to kill before departure. It’s been a long time I’ve been in the United Airlines terminal at O’Hare (I think 2003 was my last trip through here), so it felt kind of good just to wander and reminisce about days gone by. It felt really good to be back inside the United Airlines concourse at ORD again! Most people would probably cringe at the thought of walking back and forth across the terminal many times, but I enjoyed getting reacquainted with my former “home” airport. The iconic underground walkway connecting concourses B and C at ORD. 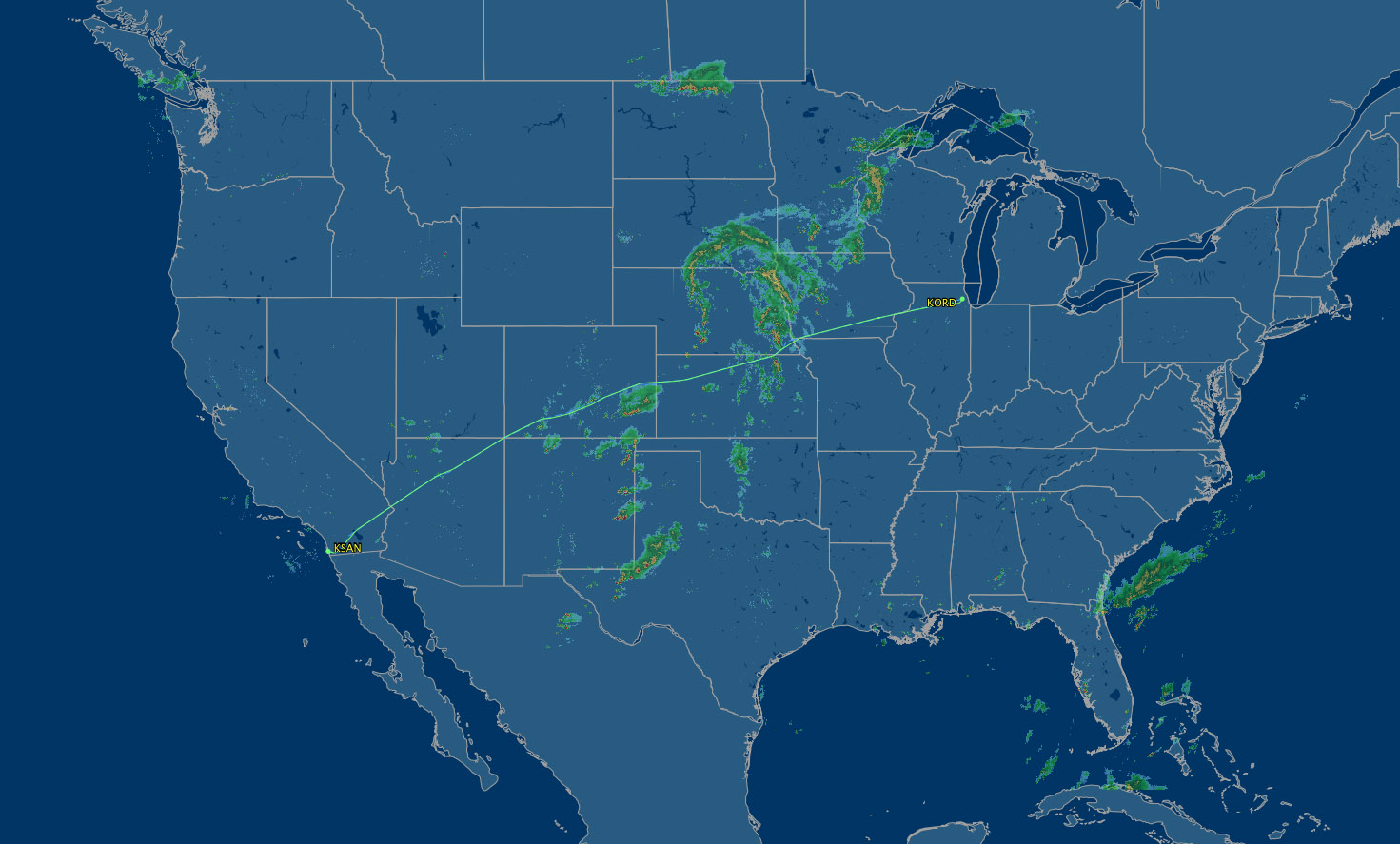 UA1753 showing an on time departure

The boarding gate for this flight to San Diego was number 29, which was located at the very end of the C concourse. While I did enjoy the nice walk to get there, I did not enjoy the crowded “end cap” gate. There are basically 4 gates crammed together at each end of the terminal, and things get crowded really fast when there are two or more flights leaving within 30 minutes of each other. Standing room only is an understatement! Standing room only at gate C29. There were two other west coast flights (LAX and SNA) departing at nearly the same time.

The boarding process was long and slow (and they paused it multiple times for reasons unknown), and that was fine by me since I wasn’t in a hurry to get on the airplane anyway. I felt as if I had spent enough time on an airplane in the past 24 hours, and the more time I could spend standing and stretching my legs the better. I ended up being one of the last 20 or so to board once they got things sorted out and started getting everyone onboard again. Moments before stepping onboard

The airplane operating this route today was a seemingly brand new 737-900 with the split scimitar winglets and that beautiful Boeing Sky Interior. It was quite a shock to my system being crammed into that tiny economy class seat after experiencing some really great premium cabins over the past week, but I didn’t mind so much. I just plugged my ear buds in, turned on some music, and listened to good tunes for the entire ride home. Looks like lots of leg room in the exit row just ahead! Large video screens and power ports at every seat It was a completely uneventful flight (I didn’t even get up to use the lavatory or have a complimentary beverage), and the music helped to make the flight go by much faster than it really seemed. I was sort of bummed about my Hong Kong trip being over though – it was an awesome experience, and I wish it could have been longer. Oh well.

Touchdown on runway 27 in San Diego was about 10 minutes early, and despite my sadness from the end of a great trip, I was happy to be back in San Diego again. I love this town – I can’t think of many other places that I’d like to call home, that’s for sure.

I stopped to grab a kale salad from a restaurant in terminal 2 east before walking out of the airport and hailing a cab for home. Felt so good to be back in San Diego! Take me home, taxi driver…

So that’s it – another trip complete! But I’m already craving my next one…